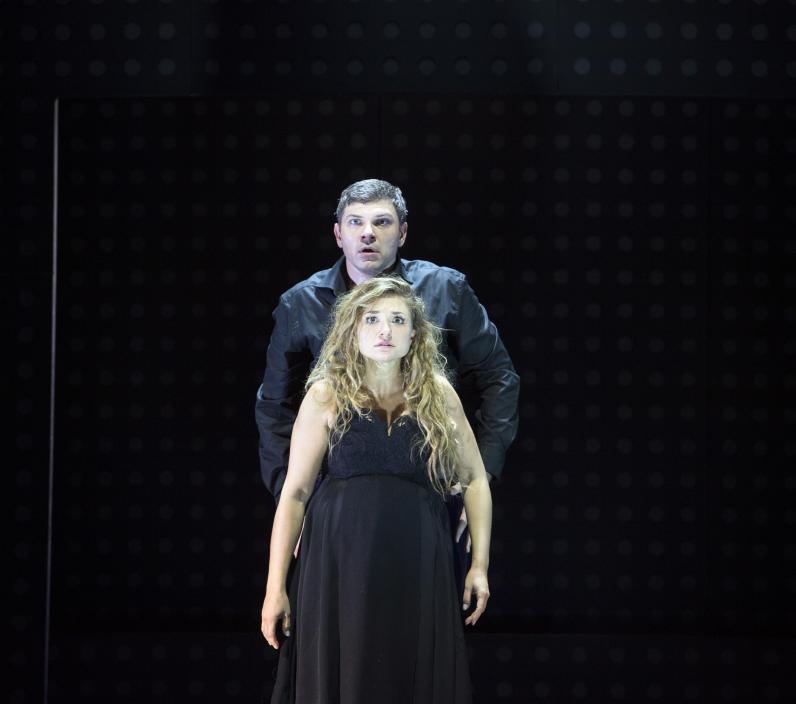 Barrie Kosky peers into the abyss of the human soul and tackles one of the most important Symbolist masterpieces in the operatic repertoire.

The illicit love between Pelléas (Dominik Köninger) and his sister-in-law Mélisande (Nadja Mchantaf) never materialises in Debussy’s opera, and the viewer - as well as Golaud, the rightful husband - is left wondering if their passion is ever consommated. In one of the most suspenseful scenes of Pelléas and Mélisande, as Mélisande's hair inundates him from a window above, Pélleas holds it and wraps it around his neck.

A mysterious young woman weeps by a fountain in a forest over a lost crown. Prince Golaud stumbles upon her while out hunting, and events are set into motion. Debussy’s impressionist score to Maeterlinck’s symbolist play builds up atmospheric musical scenery.

The young woman by the fountain is named Mélisande. She will not tell Golaud anything more about who she is, but agrees to come with him.

A letter arrives for Golaud’s parents, Geneviève and King Arkel. We find out that the widowed Golaud has married Mélisande rather than the Princess Ursule, with whom he could have formed an advantageous political match. Despite the implications of his recklessness, Golaud’s parents accept their son’s decision.

Golaud has a younger brother, Prince Pelléas. Pelléas decides to set off and visit a friend who is on his deathbed, but agrees to stay longer to wait for Golaud to come home with his bride. Later, Geneviève and Mélisande are walking together in a garden. After Geneviève leaves to take care of Golaud’s son Yniold, Pelléas begins to make subtle romantic overtures toward Mélisande.

This romance blossoms in the second act. Mélisande plays with her ring while sitting with Pelléas by the Blind Man’s Well. Her ring falls in the water as the clock strikes twelve, and we find out that at that exact moment, Golaud had an accident that has left him wounded.

When Mélisande is at her new husband’s bedside, Golaud notices that her ring is missing, but she lies that she lost it in a cave by the sea. Golaud sends her off to look for it even though night has fallen, and sends Pelléas to accompany her.

In the third act, Mélisande brushes her long hair in a Rapunzel-like vignette as Pelléas caresses it. Golaud becomes suspicious of the couple and forces his little son Yniold to spy on them. The child admits he saw Pelléas and Mélisande kiss, but is frightfully harassed by his emotionally charged father.

Symbols abound in the fourth act: Golaud appears with blood on his forehead and confronts Mélisande about her spending time with Pelléas. Yniold loses his golden ball and a flock of sheep suddenly fall silent and stop bleating. Pelléas and Mélisande finally confess their deep love for one another by the Blind Man’s Well where she lost the ring. By the well, Golaud confronts the lover and strikes Pelléas dead with a sword.

In the fifth act, the ultimate tragedy ties the narrative together: Mélisande dies shortly after giving birth, and in her last moments she denies her love for Pelléas to Golaud, insisting that she is telling the truth.

Based on the Symbolist play by Maurice Maeterlinck, Pelléas et Mélisande is Claude Debussy’s only completed opera. Having already begun work on the ill-fated Rodrigue et Chimène, on a play by Wagner devotee Catulle Mendès, Debussy turned his attention to Maeterlinck’s play Pelléas et Mélisande after realizing that Rodrigue et Chimène was completely at odds with his artistic vision.

Many consider Pelléas et Mélisande one of Debussy’s strongest works, and indeed, the composer found Maeterlinck’s libretto the perfect framework upon which to build an opera that fulfilled his vision of musical and theatrical balance. Through its extensive five-act structure, it exemplifies the musical impulses of French Impressionism and creates a mysterious atmosphere that draws the audience inexorably in. The narrative, however, is rather fractured, focusing on symbols over more traditional storytelling, creating scenes and vignettes. Maeterlinck’s libretto was also innovative at the time for making use of prose over verse, affecting the musical setting and structure. An uneasy symmetry pervades the work, following a fateful love triangle.

Defying all convention, Maurice Maeterlinck reduced the external action of his plays to a minimum; everything of consequence is to be found in the implications between the lines, and is created only through the viewer’s powers of empathy and imagination. Debussy congenially captured the ambiguous currents of the source material in a musical chamber play in the Impressionist style. This production by Barrie Kosky conjures up the psychogram of a moribund, late-bourgeois society which has nothing with which to counter a world out of balance other than the solace of a finely chiselled melancholy.

The musical direction is provided by Canadian-born Jordan de Souza, the new Kapellmeister of the Komische Oper Berlin and – at not even 30 years of age – a rising star in the international conducting scene