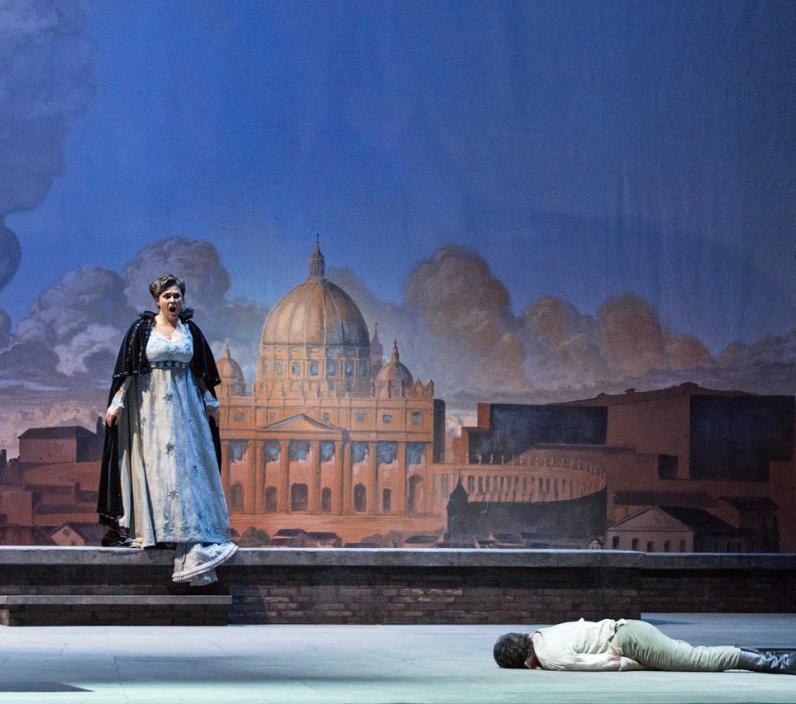 A famous singer lives only for art and love. When she is caught in a web of politics, corruption, lies and lust, she is forced to make a terrible choice.

Tosca is a timeless opera that features fundamental archetypes of the human condition: ruthless power grabbers, idealist revolutionaries and strong women ready to sacrifice it all. These characters truly come alive at the Teatro dell'Opera di Roma, the natural home of Puccini's masterpiece.

Scarpia (Roberto Frontali) sends the police agent Spoletta (Saverio Fiore) to follow Tosca. As the church celebrates Napoleon’s apparent defeat with a Te Deum, the Chief of Police indulges in his plan to steal Tosca for himself.

Tosca (Oksana Dyka) has been told she can save Cavaradossi’s life but only by giving herself to Scarpia (Roberto Frontali). Distraught by her terrible situation, the pious singer asks God why he has abandoned her in her greatest hour of need.

Director Alessandro Talevi does not consider himself a traditionalist by nature. But with Italy being home to the best scenography painters in the world, he wanted use their ancient traditions in his production of Tosca.

Cesare Angelotti, a former consul of the decayed Republic of Rome, has escaped from prison and found refuge in the Church of Sant’Andrea della Valle. His sister, the Marchioness Attavanti, has left him some clothes there in the family chapel. Elsewhere in the church, the painter Mario Cavaradossi is working on a portrait of Mary Magdalene. He compares the angelical features of the painting to the dark, sensual ones of his lover, the singer Floria Tosca. Angelotti approaches Cavaradossi for help, as they are friends who both fought for the Republic. An imperious voice resonates in the church: Tosca is jealous, believing that she heard the voice of another woman. She is also highly suspicious of the painting of Mary Magdalene, in which she recognises the likeness of the Marchioness. Cavaradossi manages to appease her and arranges for them to meet at their usual place later that evening.

Meanwhile, police have discovered Angelotti’s escape. Cavaradossi offers him a hiding place in his country cottage, and both leave at once. News arrives that Napoleon has been defeated at the Battle of Marengo, and people gather in the church to celebrate. They are interrupted by the Papal Chief of Police, Scarpia. He finds a fan belonging to the Marchioness and learns that Cavaradossi has disappeared, leading him to think that the painter had a role in Angelotti’s prison break.

Tosca returns to the church only to find that Cavaradossi has left. Furious, she is easy prey for Scarpia, who stirs up her jealousy by showing her the Marchioness’s fan. She storms out and heads for her lover’s cottage, unaware that Spoletta, Scarpia’s henchman, is following her. Scarpia has devised a cruel but cunning plan: he wants to have Cavaradossi executed and make Tosca his own lover. He exclaims: 'Tosca, you make me forget even God!' while the Te Deum, a Christian hymn of praise, resonates throughout the church.

While enjoying supper in his office and listening to Tosca singing for the Queen elsewhere in the Palazzo Farnese, Scarpia savours in advance the success of his plan. Spoletta brings in Cavaradossi, who denies knowing Angelotti. Tosca rushes in and Cavaradossi begs her not to tell Scarpia what she knows about the escaped prisoner. The painter is taken to a neighbouring room where he is tortured. Tosca, unable to withstand the cries of her lover, gives in and reveals Angelotti’s hiding place.

A messenger enters with news that Napoleon has in fact won the Battle of Marengo. Cavaradossi is dragged in and sings a hymn to freedom before he is taken to prison. Spoletta informs Scarpia that Angelotti has committed suicide. The Chief of Police explains that the price for Cavaradossi’s release from political imprisonment is Tosca herself. She reluctantly accepts. Scarpia gives the order that Cavaradossi’s execution be simulated, and prepares a diplomatic passport for Tosca and Cavaradossi so that they can flee Rome together. Scarpia tries to claim his prize and kiss Tosca, when she stabs him with a knife. Looking at the Scarpia’s body, Tosca disdainfully exclaims: ‘Before him all Rome trembled!’

Dawn is breaking over the roof of Castel Sant’Angelo. As Cavaradossi waits for his execution, his last thoughts are for Tosca. She comes in, informing him that the execution will only be simulated, and that they will escape Rome together. The firing squad aligns, and Tosca tells Cavaradossi to act as if he has really been shot. After the shooting, she runs towards him, only to find that he is really dead, and that Scarpia has betrayed her. Scarpia’s body has been found and Spoletta arrives to arrest Tosca. Instead of surrendering, she decides to jump into the void, crying: ‘O Scarpia, we meet before God!’

5 things to know about Tosca

Puccini's Tosca has been one of the most popular operas in the repertoire ever since its premiere in 1900, just 14 days into the new century. Unlike most operas, it has a precise and concise setting: the action happens in Rome between noon on Tuesday 17th June 1800 and dawn the following day. During those eighteen hours, all the major characters suffer violent deaths.

The real motivations of the characters in Tosca are strictly personal. Nevertheless, the politics and ideals of the time are always in the background. Tosca is set at a critical time in the military campaigns of the French general  - and later emperor - Napoleon Bonaparte. The action on stage shows the reactions of the people of Rome to news of Napoleon’s apparent defeat, then actual victory, at the Battle of Marengo. It reflects the divided sentiments of the people of Rome, torn between their loyalty to the crown and hopes for new freedoms under a new ruler.

Puccini’s opera is a violent drama based on Victorien Sardou's hit play La Tosca, which was written as a star vehicle for the famous French actress Sarah Bernhardt. The composer saw La Tosca at least once in Milan and Turin. He wrote to his publisher, Giulio Ricordi, begging him to get Sardou's permission for the work to be made into an opera: "I see in this Tosca the opera I need, with no overblown proportions, no elaborate spectacle, nor will it call for the usual excessive amount of music.” Sardou replied that he would prefer his play to be adapted by a French composer, and he complained about the reception La Tosca received in Italy. Nevertheless, he and Ricordi were able to negotiate acceptable terms.

Puccini visited Sardou in Paris to discuss the adaptation. The composer wanted to replace a patriotic hymn of the imprisoned Cavaradossi in Act III with a love song, which the playwright allowed. But while Sardou wanted an abrupt, thundering finale, Puccini disliked the suicide at the end of the play. He had in mind a different ending, where, rather than leaping, Tosca would go mad, collapse, and die on the body of her lover. Evidently on this particular point the composer lost the argument.

Tosca was Puccini’s next opera after his first undisputed success, La bohème. Comparing the two, the composer said: “The colour in Tosca is no longer romantic and lyrical as in La bohème, but sensual, passionate and murky. Scarpia and Spoletta and shady individuals, and the heroes are not as docile as Rodolfo and Mimì, but active and brave".

The plot plays with passions rather than feelings. Tosca is a story of cheating and doubt, where everything - especially love - is troubled by jealousy. Even the marginal characters like the sacristan and the prison guard lie or act dishonestly. Everyone fights deception with deception, which creates a suffocating atmosphere of suspicion and doubt. It is these qualities that place Tosca firmly in the category of verismo opera, a style of Italian realism linked to literary and artistic movements of the same name.

As well as taking place at a specific time, Tosca takes place in three specific, real-life locations: the Basilica di Sant'Andrea della Valle, which is famous for its large painted dome; the Palazzo Farnese, which serves today as the French Embassy; and the Castel Sant’Angelo, which was commissioned by the Roman Emperor Hadrian as a mausoleum for himself and his family then subsequently used as a papal fortress and castle.

A church, a palace and a castle. These are powerful locations built by the great architects of Rome to project the power of her leaders and institutions. Caught in the middle of it all is Floria Tosca, a singer who lives only for art and love – powerful forces in themselves. From the start of Tosca until the last note, opposing forces fight to the death, but they are forces that cannot escape each other for they are eternally bound: love and jealousy; art and deception; the cruel injustice of man and the anticipated justice of God.

5° Nothing for a director to do?

Alessandro Talevi is the director of this production. A well-known conductor friend of his once said to him, “Tosca must be so boring for you. There is absolutely nothing for a director to do!” The conductor was expressing a commonly-held misconception about the opera: that the characters are simplistic, and that the action is so obvious that it needs little more than a few basic stage indications from the director to bring the piece to life.

“However,” says Talevi, “I never cease to admire the subtlety and detail with which Puccini creates his scenarios, and the way in which they constantly invite and demand deeper psychological investigation from the singers and director.” He argues that there exists a level of detail, subtext and ambiguity in Tosca that is on a par with the subtlety of operas like Debussy’s Pellèas et Mèlisande. “The challenge for a director is to reveal these dramatic subtleties to an ever-changing cast of singers. That is why I find it useful to take them back to the text, to the motivations behind Puccini’s skilful setting, in order to rediscover the honesty and reason for every dramatic action on stage.” 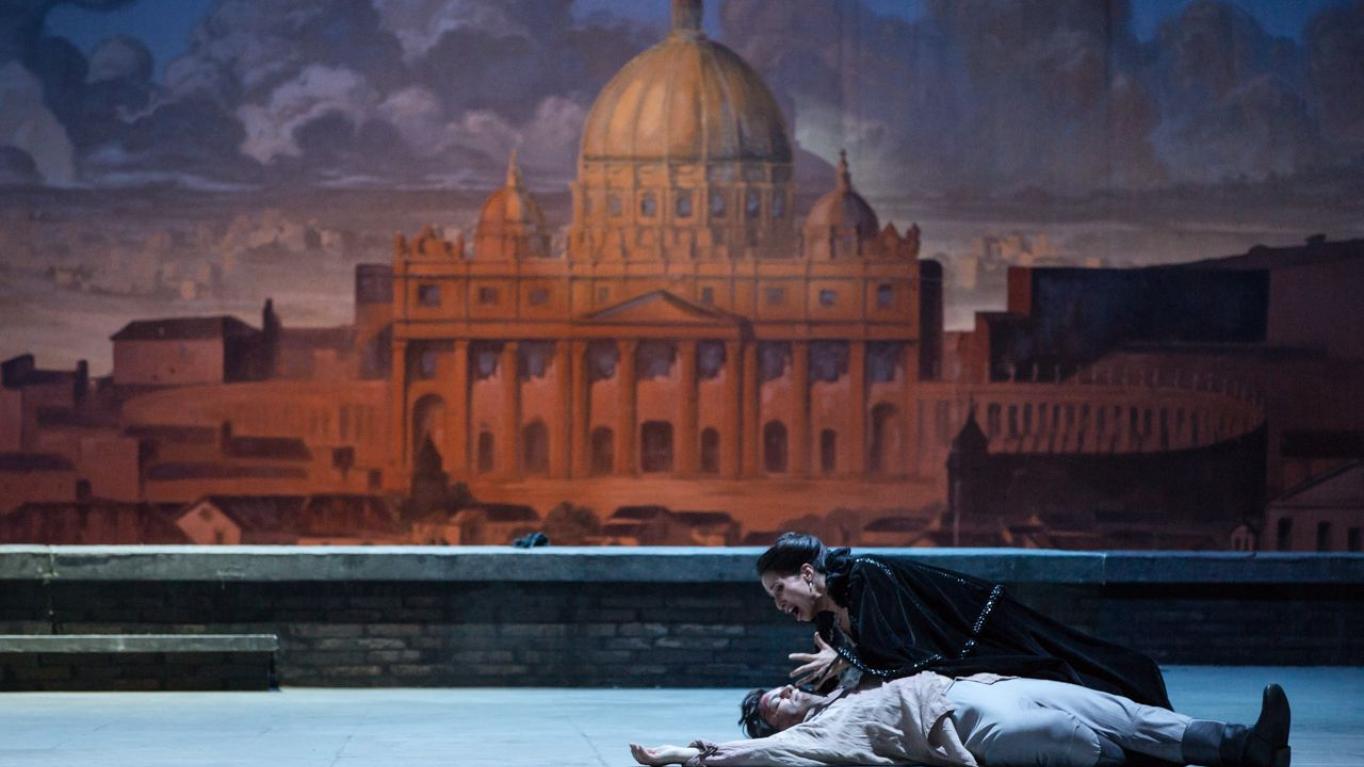 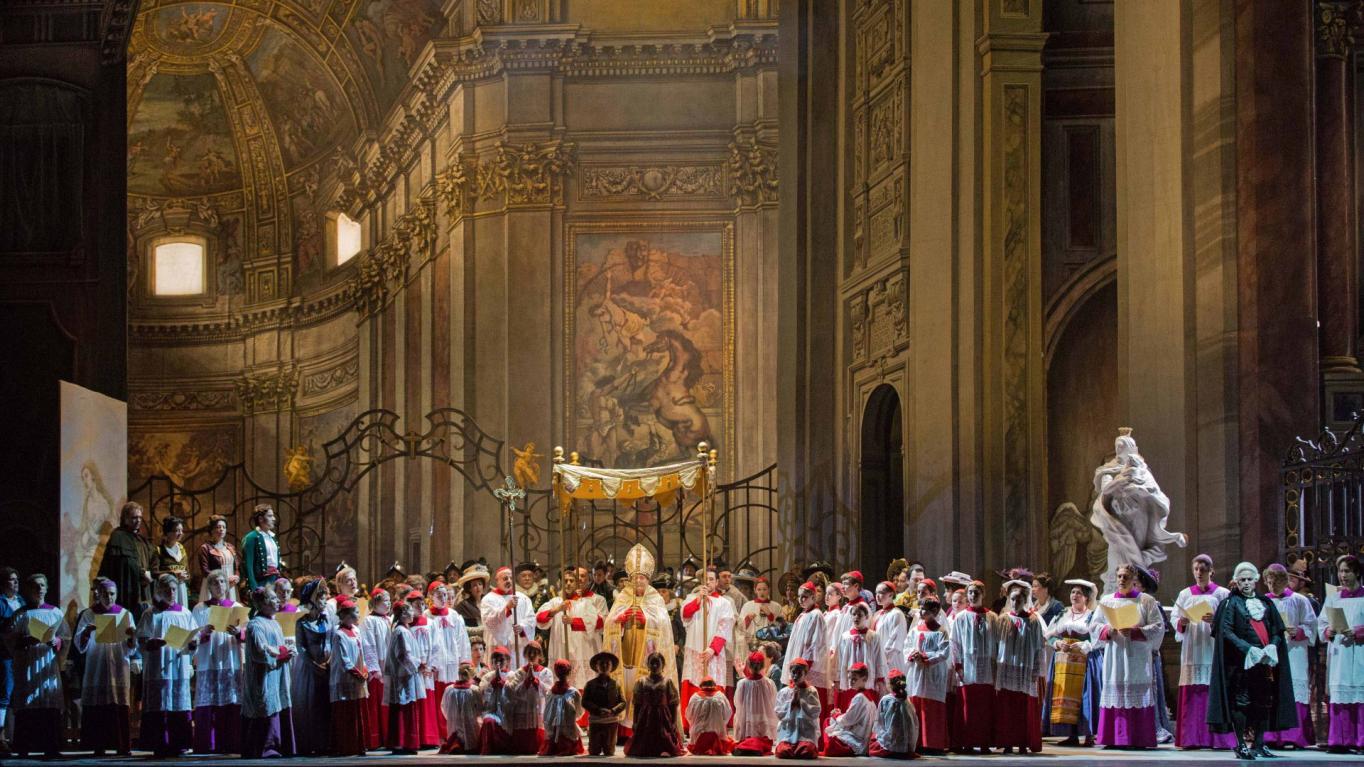 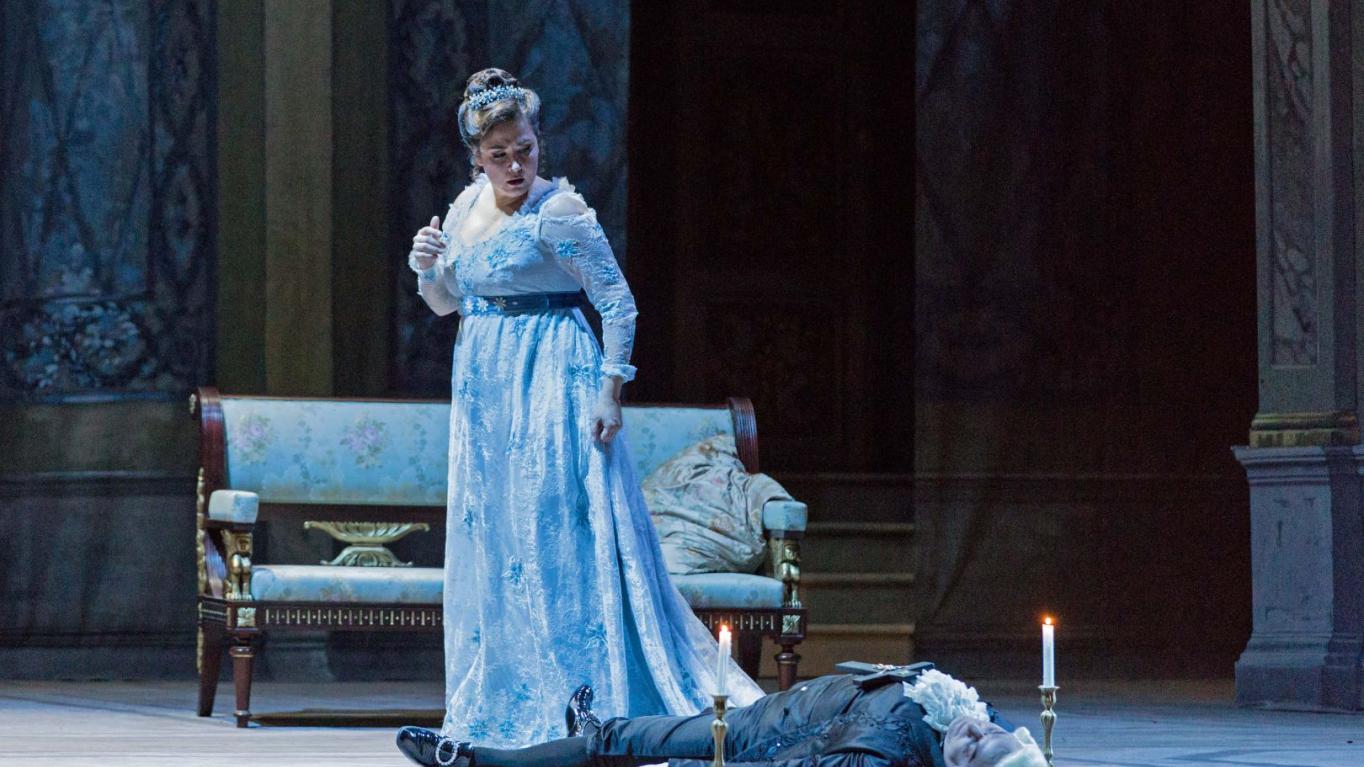 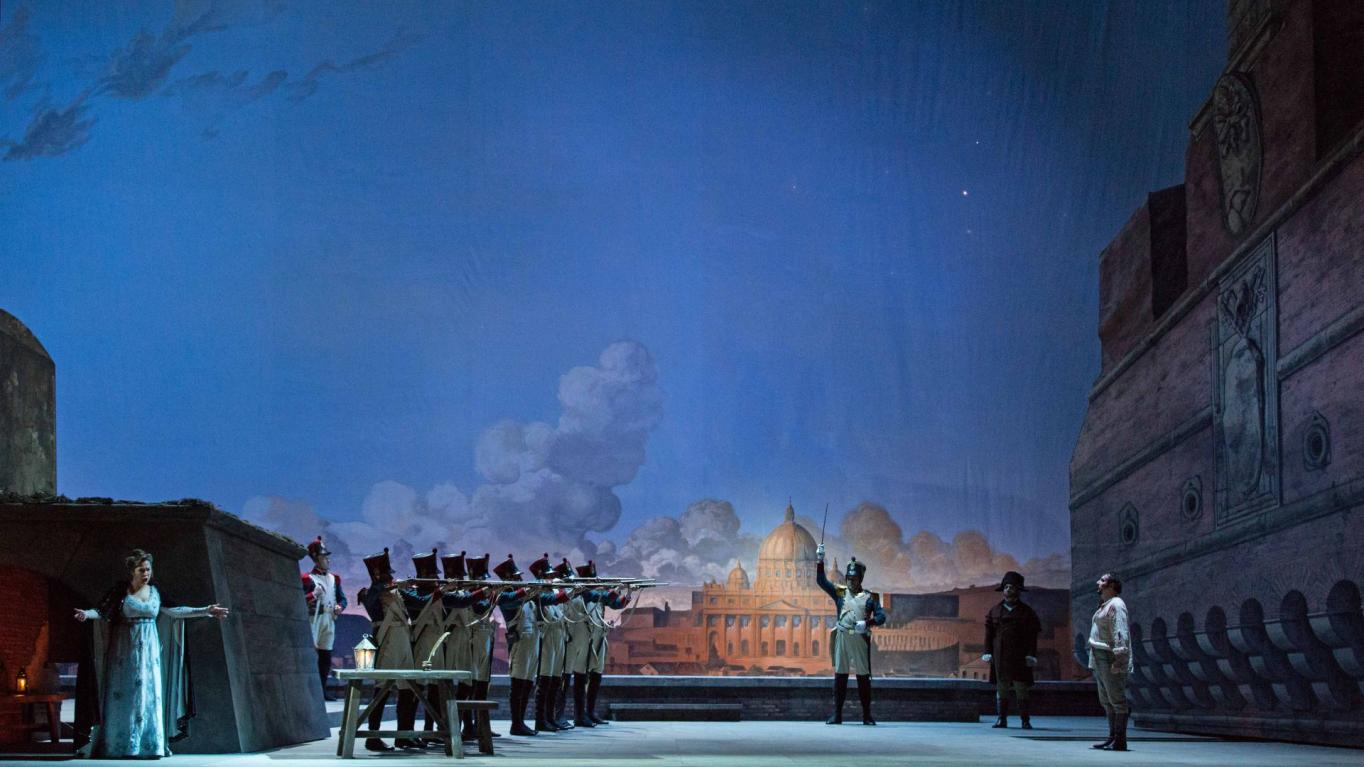 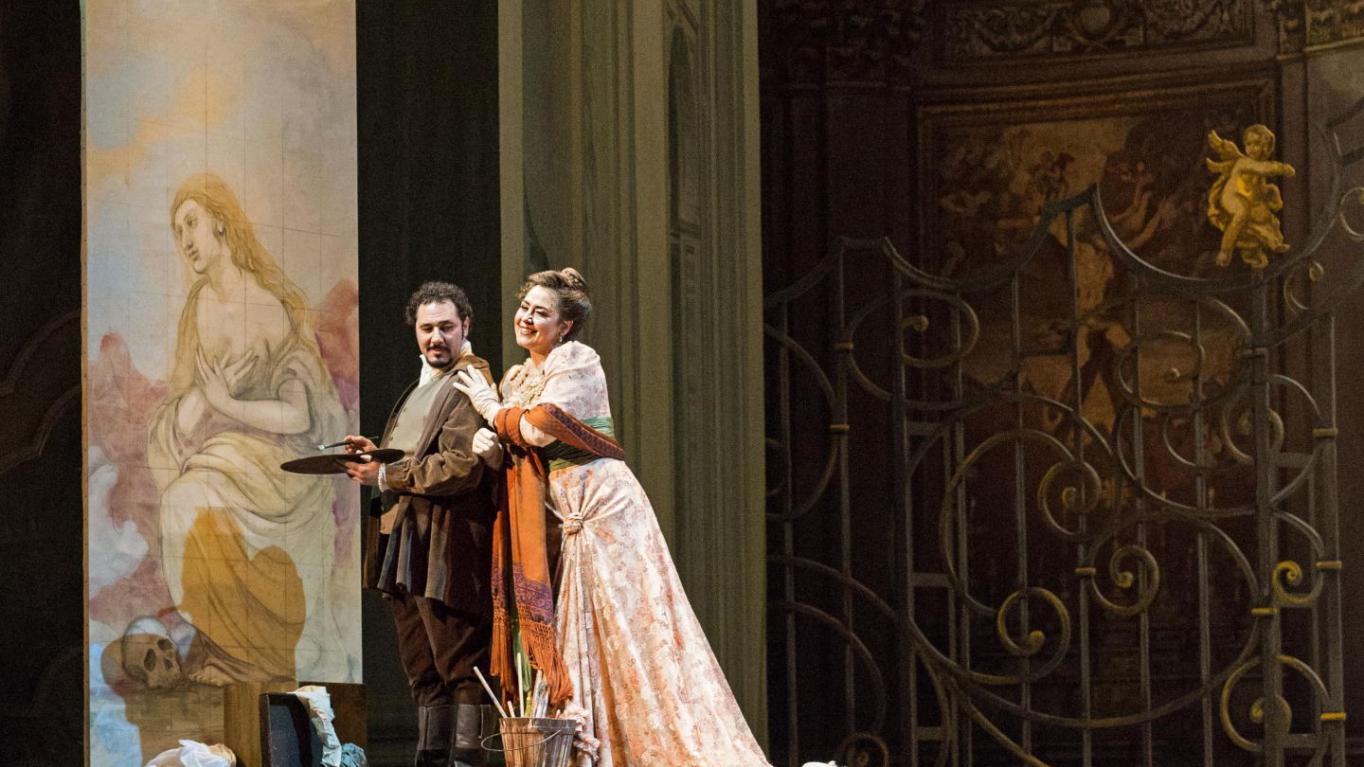