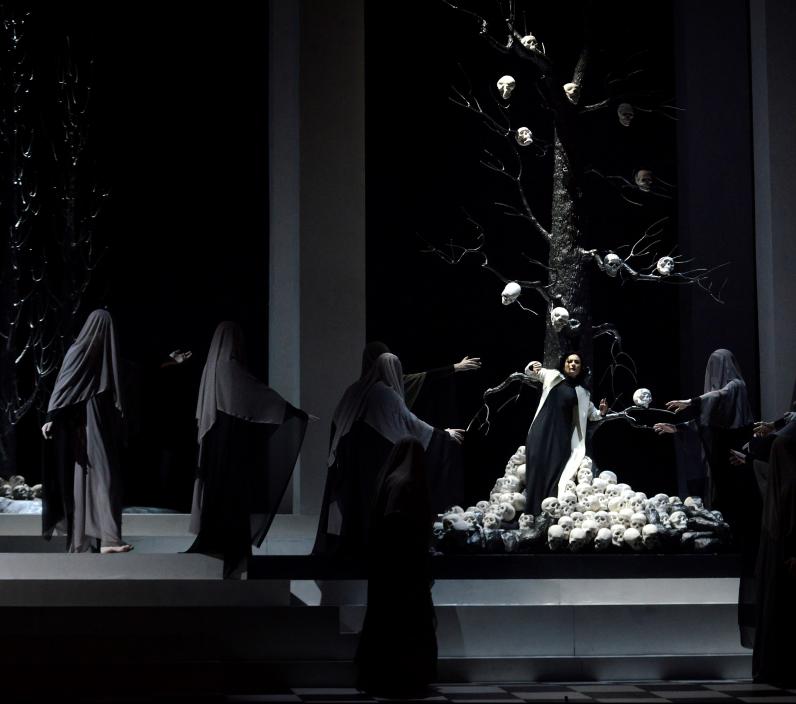 The original Italian version of Gluck’s Alceste, first performed in Vienna in 1767, is the purest example of his artistic credo. His purposes were none less than to reform opera and purge it of the excesses and distractions which it had accumulated. He wanted to return to the model of ancient Greek tragedy; to reinstate the importance of words; and to write music which illustrated and drove forward powerful stories.

Gluck’s unflinching ideals were what endeared him to the greatest reformers of grand opera during the 19th century, Wagner and Berlioz, each of whom prepared edited versions to bring his operas back into public performance. Wagner presented an adapted and rescored German version of Gluck’s Iphigenia in Aulis in Dresden in 1847. Berlioz reworked Orpheus and Eurydice for performance in Paris in 1859.

Christoph Willibald Gluck
I have striven to restrict music to its true office of serving poetry by means of expression and by following the situation of the story.

Orpheus remains Gluck’s most often performed score, and its original Italian version of 1762 was the first of his ‘reform’ operas, though it was his 30th work for the stage in a career of already 21 years. But it was the preface to Alceste which set out his manifesto:

When I undertook to write the music for Alceste, I resolved to divest it entirely of all those abuses, introduced by the vanity or by the too great complaisance of composers, which have so long disfigured Italian opera and made of the most splendid and most beautiful of spectacles the most ridiculous and wearisome. I have striven to restrict music to its true office of serving poetry by means of expression and by following the situation of the story, without interrupting the action or stifling it with a useless superfluity of ornaments [...] I believed that my greatest labour should be devoted to seeking a beautiful simplicity…

There is a general consensus that Gluck’s substantially revised version of Alceste, composed for performance in Paris in 1776, is the superior work, musically more sophisticated and dramatically more varied by reinstating the semi-comic character of Hercules from the source play by Euripides into the last act. But it is the earlier Italian version that best embodies his stated ideals, and which exhibits an unswerving and monumental integrity which can be overwhelming in a fine performance, such as that provided by Teatro La Fenice.

Director and designer Pier Luigi Pizzi employs his trademark elegance to depict an antique world with clear modern lines: classical arches; a restricted palette of mainly white, gradually invaded by funereal black after Alceste makes her fateful decision to sacrifice her life for her husband; an economy of movement so that every gesture tells. Carmela Remigio’s sculpted face and figure enhance her clear diction and silver tones to create a dignified and believable heroine. Marlin Miller combines heroic sound with genuine anguish as her desperate husband Admetus. Even the children make an impression among the strong supporting cast and disciplined chorus. French conductor Guillaume Tournaire exerts stylish control of La Fenice’s forces.

The power of Gluck’s vision in this opera made an indelible impression on the young Mozart, when he attended rehearsals for the premiere in Vienna. Gluck’s music moves at a statelier pace than the more volatile Mozart’s, but the younger composer learned from the elder’s word-setting and, eventually, from his treatment of the chorus as an integral component of the drama. The evidence only arrives with the also classically-inspired Idomeneo of 1780/81.  Mozart’s first operatic masterpiece travels beyond Gluck, but is firmly founded on his aesthetics.

Today, we need the antipodes of both Mozart and Gluck: Mozart for his unsurpassed humanity and insights into its fallibilities as well as its aspirations; Gluck for his nobility, and, in our confused 21st century, for his beautiful simplicity.

▶ Alceste - Watch the full performance on OperaVision from 3 April to 2 October 2020.