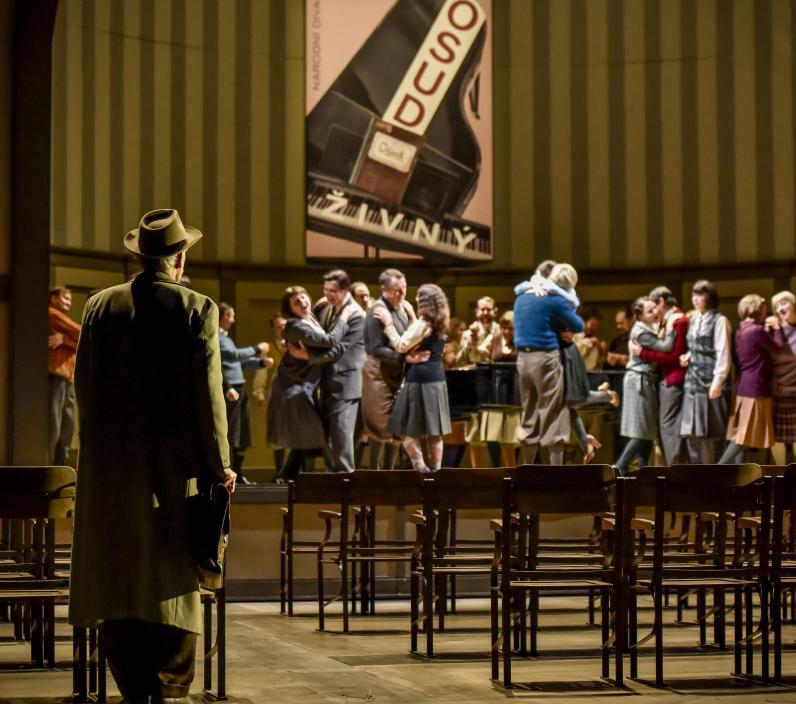 Janáček and Brno are intimately linked

An interview with Jiří Heřman, Artistic Director of the Janáček Brno international festival

In only seven editions, the Janáček Brno international festival has established itself as a staple in the European cultural festival landscape, winning the prestigious International Opera Awards prize for the best festival in 2018. Can you tell us more about its specificity and mission?

The Janáček Brno international festival takes place in the city where he lived and worked, and most of his life’s works have had their world premieres here. Audiences from all over the world can feel the unique atmosphere of the city with a rich programme of international theatre and concert productions in less than three weeks.

The mission of the festival is to present Janáček's works in the widest possible range of interpretation. The opening of the festival traditionally belongs to the Janáček Opera ensemble, which has been continuously devoted to Janáček's work and cooperates with leading Czech and foreign performers. The festival's confrontation of interpretations by major foreign ensembles reveals more and more of the work of the most performed Czech composer in the world.

How do you reconcile this local anchoring with opening the festival to a broader appreciation of Janáček in relation to other musical and aesthetic currents of his European contemporaries?

Janáček and his works quickly found their way across borders. And of course, one of the festival's goals is to offer audiences Janáček's work in the context of other composers - both his contemporaries and those he inspired and continues to inspire. Each year of the festival brings a separate theme that runs throughout the programme.

2020 has been a difficult year for live performance everywhere. While the 2020 edition of your festival was nonetheless able to hold many of its planned events, others such as the Pavol Breslik recital have been rescheduled to this year. What are the challenges and what are the unexpected benefits of spreading the biannual festival over two years?

The performances and concerts that have been rescheduled for this year have also become a symbolic prelude and invitation to attend next year's 2022 festival and that's an advantage. A major challenge was to reschedule and maintain the artistic quality of the staged productions more than a year apart so that we could present them to the audience, including successful online broadcasts. I am very pleased that we are able to present Janáček's Osud (Destiny) to audiences around the world through the excellent international project OperaVision, directed by Robert Carsen and conducted by Janáček Opera NdB's Chief Conductor Marko Ivanović.

Indeed, the return of Robert Carsen’s production of Destiny, which premiered only 30 years after Janáček's death, is perhaps the highlight of the festival. What makes this production - the encounter of this opera with this director - so unique?

Janáček is one of Robert Carsen's favorite composers, he has already directed six of Janáček‘s operas. I am very glad that he accepted the offer to stage Destiny with our ensemble. Destiny is not such a common work on the international stage, and finding the key to the libretto is not always easy, given the multiple time levels of the opera's plot, which deals with the tragic fate of the composer Živný and his unfulfilled love affair. Robert Carsen, for the first time in the history of this work's performance, has approached a unique interpretive key by dividing the role of the composer between two soloists portraying the composer in his youth and at the end of his life. Radu Boruzescu's scenographic concept is also unique - one space of the Conservatoire's concert hall, which in Živný's memories transforms into different settings such as Luhačovice or the composer's apartment, and finally becomes again the setting of the Conservatoire's concert hall, where Živný's fateful life's work is supposed to be presented.

May we venture a glimpse into the future of the festival? Can you tell us a little about what you are planning for the 2022 edition?

The 8th annual of the Janáček Brno 2022 festival has a theme ‘Quo Vadis’, a quotation from the spiritual cantata by Feliks Nowowiejski, which Janáček always wanted to perform in Brno and never succeeded. It has a great humanistic message, which is reflected in Janáček's work, especially in the works with Slavic inspiration. I am very pleased that the festival will bring together all of the most important Czech conductors of world-class stature, Jakub Hrůša, Tomáš Hanus, Tomáš Netopil and Marko Ivanović. More than two years ago, Jakub Hrůša approached me with the idea of staging the opera From the Dead House together with the Glagolitic Mass on stage. This production will inaugurate the festival and will also be broadcast live as part of the OperaVision programme, which we are a part of. The festival will host two major international opera companies, Grand Théâtre de Genève with a new production of Káťa Kabanová directed by Tatjana Gürbaci with music by Tomáš Netopil and Welsh National Opera with The Makropulos Affair directed by Olivia Fuchs and conducted by Tomáš Hanus. The Prague National Theatre will also be there with a new production of Káťa Kabanová and Schulhoff's Flames, directed by Calixtus Bieito.

From the concert series, I am looking forward to the already mentioned cantata Quo Vadis conducted by John Fiore with the Janáček Opera Orchestra, concerts by the Orchestre de la Suisse Romande, Welsh National Opera and the Czech Radio Orchestra. The concert series will present top ensembles such as the Pavel Haas Quartet, Zemlinsky Quartet and Janáček's Zápisník zmizelého (Notebook of the Disappeared) in two versions. The first is internationally acclaimed performance with J. Drake, Nicky Spence and Václava Krejčí Housková and the second is performance with Miloš Štědroň's instrumentation with the equally well-known performer Iva Bittová and the leading Czech tenor Jaroslav Březina. There is much to look forward to, pre-sale tickets for the great programme of the 2022 edition will go on sale on 30 November at the last concert of the 2020-2021 festival year, performed live on OperaVision by Pavol Breslik.