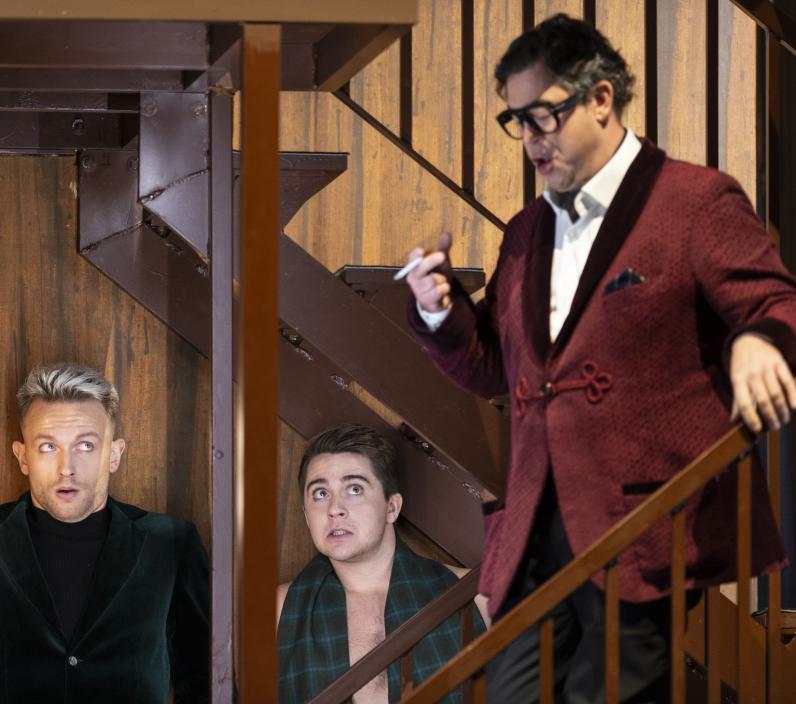 Ever since director Jetske Mijnssen first staged The Barber of Seville 10 years ago, she has had a problem with the opera. Quite simply, she does not find the end credible. There is a good reason for that, if you know the background history.

To understand the end, we have to start at the beginning: The playwright Pierre-Augustin Beaumarchais wrote the political and comic trilogy The Barber of Seville, The Marriage of Figaro and The Guilty Mother between 1782 and 1792. The plays follow Count Almaviva, Figaro and Rosina (later Countess Almaviva), Doctor Bartolo and Don Basilio through their lives in a series of intrigues and entanglements. However, there is one thing that remains constant:
‘They are all fairly unreliable and unlikeable, if you ask me’, says director Mijnssen.

The family that is not a family

‘The characters we meet act as a strange, dysfunctional family, even though they are not actually related. We have this doctor, who is not necessarily a doctor, who would really just like to drink his coffee and read his newspaper in peace. We have the music teacher, Don Basilio, who as a sensitive soul is slightly out of place there, while Figaro and Rosina are like two bickering teenage siblings teasing each other at the breakfast table. In a strange way, they all belong together in this landscape.’

But for Mijnssen it is not about getting us to like them. She maintains that they are all greedy and wilful:
‘The most important thing about this opera is that they are all unpleasant people. Even Rosina. I know that she tends to be regarded as a victim of her time, because she is kept locked up by Doctor Bartolo and is about to be forced into marriage. But I see her as a scheming woman, full of her own conspiracies, who uses the count to get away from Bartolo.’

However, a rule always has an exception.
‘Berta. In the original version, she is an old housekeeper, but in our version she is young and madly in love with Figaro. She also mainly thinks of herself, but in the end she is probably the nicest person on the stage.’

Back to the beginning

It was Mozart who first turned Beaumarchais’ second play into an opera, The Marriage of Figaro. The year was 1786, and the opera became an instant success.

Thirty years later, in 1816, Giacomo Rossini decided to make an opera out of the forerunner of Mozart’s masterpiece. The Barber of Seville was written the way the music sounds: effervescent and bubbling with ideas. Rumour has it that Rossini spent between 13 and 19 days on the entire work.
In The Marriage of Figaro, the audience of the 19th century had got to know Count Almaviva as a real philanderer. In The Barber of Seville, when they met the younger version of the count, who still had an aura of innocence, many people saw him in light of The Marriage of Figaro – all that glitters is not gold. But nowadays we are not guaranteed to view the count in The Barber of Seville with the same healthy scepticism. And that is where Jetske Mijnssen’s problem starts.

‘I don’t believe the ending the way it is written, and I don’t think anyone can. The opera ends with Rosina, Figaro and Count Almaviva succeeding in fooling the grumpy old Doctor Bartolo, who had tried to marry Rosina against her will. The three bold young people seem to be getting their revenge on the bad-tempered old man. Is this commedia dell’arte portrayal of three young heroes and the grumpy old man still relevant for us? Well, it isn’t the story I want to tell’, says Mijnssen.

And that is why she sat down and listened again. Of course Rossini knew this about Count Almaviva – so was there anything in the music that showed his true colours?
‘There is an aria at the very end of this opera that is almost always cut. It’s called ‘Cessa di più resistere’ and it’s different from the rest – it’s a showstopper. When I put on The Barber of Seville 10 years ago, it went straight out, because I thought: What?! Will the count sing for eight minutes at the end of the opera? No way!’ Mijnssen laughs.

But now she has listened to the aria with new ears.
‘This is an amazing number, a bravura aria, but as a director you must have a specific idea about it if it is going to work. So I listened to the count boast of his love for Rosina (they are about to get married) while he’s actually boasting about himself. But then … he loses it completely in the marvellous coloraturas. My first thought was: This is the count I know. This is the count from The Marriage of Figaro.’
Mijnssen calls it an expression of his superficial personality, perfect for the womaniser that the count is going to become. The aria thereby breaks up the happy ending and bridges the gap to The Marriage of Figaro.

Bringing in ‘Cessa di più resistere’ is a perfect illustration of Mijnssen’s work as a director. It’s about taking the work seriously in more than one way.
‘If you’re going to do comedy right, you have to take the framework seriously. The more seriously the singers take it, the funnier it gets. The first time I did The Barber of Seville, I didn’t rely on the material. I tried to find a new framework and situations for the piece. Now I want to rely on the material, focus on what is between all these unlikeable people, who for some strange reason all collide in Doctor Bartolo’s mansion.’

It’s traditional to treat The Barber of Seville as a farce. The consequence, according to Rossini biographer Richard Osborne, is that the characters have been reduced to a kind of puppet. And if you ask Jetske Mijnssen, they are far from one-dimensional.
‘The most important quality of any good comedy is that in the end, it hurts. These people remind us of our own weaknesses. It’s like in the comic opera Don Pasquale: It’s painful to see the old man believing that he can be happy with a young woman. It’s painful when everything collapses.’

▶ The full performance is no longer available but other material about the production can be found here. 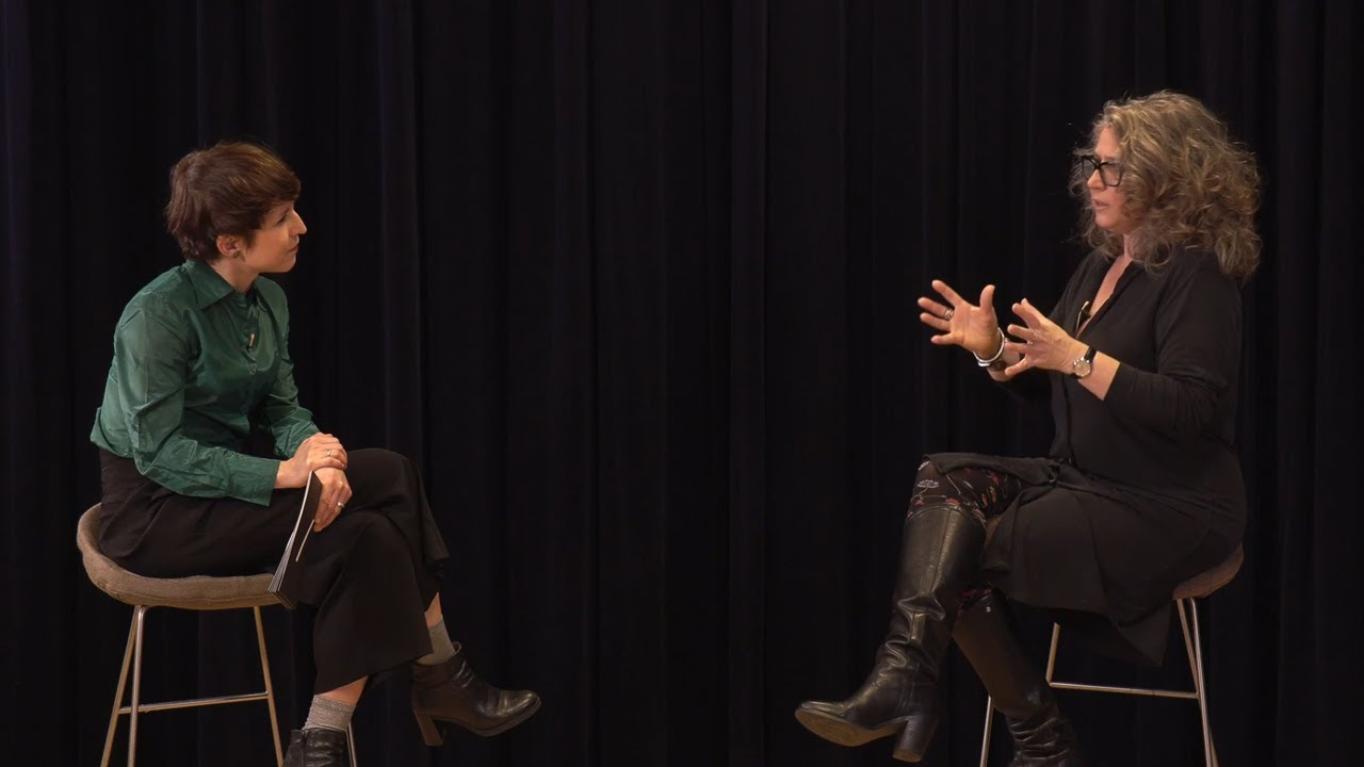