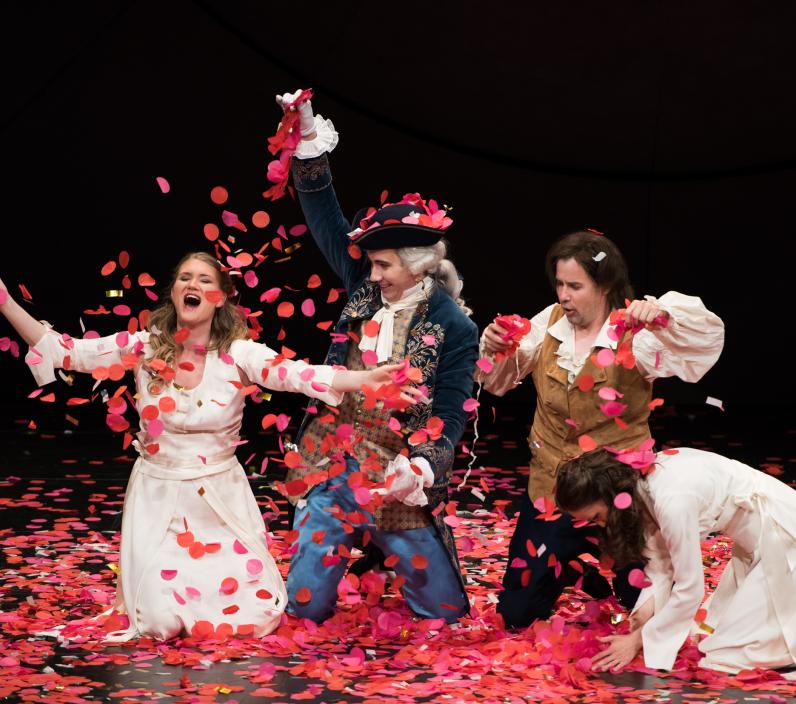 Opera, the Art of Emotions

Opera, at its core, is a way to tell a story through music and singing.

Since its invention in the late 16th century in Italy, it has continuously evolved, becoming the universal art form known today. Drama, poetry, visual arts and sometimes dance interact with music to create a unique alchemy that changes show after show, production after production. An opera is composed of four essential elements: the text (‘libretto’) and the music, the singing and the staging.

The libretto is the ‘script’ of an opera. It can be an original creation, sometimes written by famous poets or novelists (as Hugo von Hofmannsthal and Stefan Zweig for Richard Strauss’s works), but often is an adaptation of plays (Shakespeare was a great source of inspiration for librettists), tales or novels. The subjects developed in libretti are various: forbidden love, infidelity, revenge, craving for power, war, ancient myths or historic events...

All human passions are represented in opera. Love, Tragedy and Death are often at the heart of the plot. The characters, sometimes torn between their feelings and their duty, are confronted with extraordinary situations and are carried away by their heightened feelings. Love at first sight, sacrifice, enchantment, courage, suicide or murder: all extremes can happen. Some characters are punished for their crimes, other find redemption or are stricken with remorse… and sometimes there is a happy ending!

Mehmet Murat ildan
You want to feel that you belong to something higher, to something even beyond this universe, then go to the opera!

Music is a necessary and inextricable component of opera, but it is surprising nowadays to think that it has not always played the lead role. For the first composers, who were inspired by Greek tragedy, it was ‘Prima le parole, dopo la musica’ (‘The words first, the music after’). Throughout history the libretto and music have alternately claimed primacy, although in reality they complete and exalt each other, intensifying the passions of emotions of the actions and the characters.

Composers exploit the extraordinary suggestive power of music in order to create particular atmospheres that lyrics or staging cannot create. Some authors use recurrent musical motifs to represent a character, an emotion or a concept. In Tristan and Isolde, Wagner extensively uses motifs to indicate for example Tristan’s sorrow, the arrival of dawn, the sea or the Love Potion which damns the lovers to love each other in perpetuity. The opening chords of the opera introducing the lovers’ impending fate resonate several times throughout the opera until they find a resolution in its very final moments.

Richard Strauss, Capriccio
COUNTESS: Words and Music are fused into one … bound in a new synthesis. (…) In choosing the one you will lose the other! Does one not always lose, when one wins? Do you want to be consumed between two fires? You mirrored image of Madeleine in love, can you advise me, can you help me to find the ending… the ending for their opera? Is there one that is not trivial?BUTLER. Your Ladyship, dinner is served.

There are different voices classified in six principal categories, from the highest pitched to the lowest: soprano, mezzo-soprano, contralto for women; and tenor, baritone and bass for men. Moreover, voices are characterized according to their power and agility: they can be light, lyric or dramatic. A light voice is not very powerful but can easily reach the high notes and vocalises, unlike a dramatic voice which is powerful but less agile.

Each voice type is traditionally associated with particular roles, be them heroes or villain. In Bizet’s Carmen, Carmen is a wild seductress who has experience of the world: so she is played by a mezzo-soprano with a dark and warm voice. Gilda in Verdi’s Rigoletto is a lyric soprano: her clear and high-pitched voice symbolizes her purity, innocence and naivety.

Can't distinguish your contralto from a mezzosoprano? You can read more about voice types in here.

Before the 20th century, the theatrical dimension of an opera performance was left on the side. The staging became important when the programming of opera houses became more focused on the existing repertoire than on new creation.

This does not mean that going to the opera was in any way less entertaining in the past. Opera stages have always been an extraordinary place, with spectacular visual effects and big machinery. The possibilities of staging have benefited from technical progress, and now special effects, digital technology and image projections are used in many productions.

A staging is not a simple illustration of a work: it carries a new concept or meaning. The director proposes a new reading of an opera. This view may be close to the libretto and the author’s conceptions or a more personal interpretation of the work. Some directors transpose the action to another era, in another situation or in a timeless and immaterial context.

These transpositions bring out certain dimensions of the works and enrich their significance by disclosing some of their unknown aspects. For example, in a modern production, the themes developed in a baroque opera can be treated as very actual. These perspectives adopted by directors change the way that audience sees and understands the works. Opera recreates and reinvents itself constantly. Before the rise of the curtain, nobody knows what will happen on stage.  That is what makes opera so exciting.