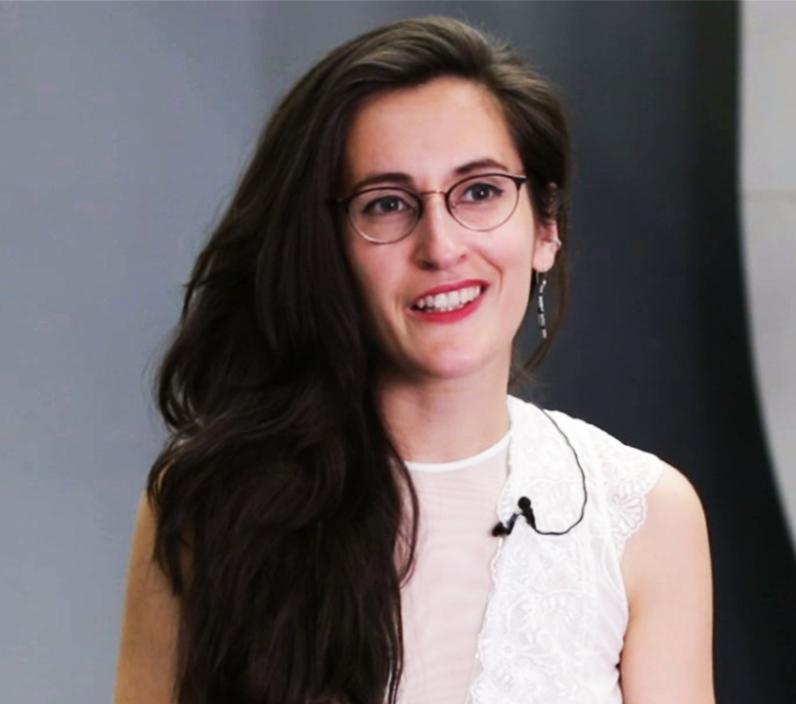 An interview with director Ilaria Lanzino

It’s your first time with Polish opera and, right from the beginning, with Moniuszko, the father of Polish opera, as he’s really widely known here. Do you feel any pressure when dealing with this opera which is said to be unexplainable to foreigners because it’s so grounded in the localities?

Ilaria Lanzino: My first approach to Moniuszko was to read his biography. The very first thing I read was what you’re saying now, that he’s meant to be the national father of Polish opera – but actually, it’s something that he didn’t pursue on purpose. This was more a matter of perception. He did write The Haunted Manor in order to comfort the nation, as he says in a letter. If you take a look at the themes that he’s using, he’s always been interested in people excluded from society, which back was interpreted as oppression of Poland by a foreign country. He was actually more interested in the internal exclusion of people within society. Maybe because I wasn’t born here and don’t have this automatism about Moniuszko, thinking that he’s the national composer, I could be more open, which made it easier for me to realise he’s a very good composer who simply happened to become the national composer. Not because he purposefully wanted that with all his heart and soul, but because this was what Poland needed back then.

Do you like the characters of The Haunted Manor?

I love each one of them and also excuse them for some behaviours that wouldn’t be excusable today since I realise that they are a product of their times. This is why I start the first act in a very traditional way, with also a past aesthetic. Because especially in the beginning there is an explosion of conservative, militarist and male chauvinistic values. And since I love the characters, I didn’t want to put them in a contemporary suit; because if you make them all contemporary, then they are automatically awful characters – and if they were contemporary, from a liberal point of view, then there would be no way to rescue them. They represent a very conservative way of thinking, while the haunted manor represents the projection of the fears of this conservative community.

That’s important –  some people say: you have to remember the times were different, so a certain way of thinking was just how it was back then.

Yes, of course. I am not for cancel culture. I am more for not being ignorant and knowing about why people back then used to think this way. For instance, why did Moniuszko write this opera? Poland was reaching a new low point in its history of humiliation. You needed to reinforce this feeling of patriotism and community. If on the political level, you cannot feel the community because there is none, then someone from the outside is coming to destroy you. This is what I want to express through my staging: people radicalise their values after they lose everything, which is the reason why in the first act we play in a completely destroyed place. In The Haunted Manor, there are traces of wounds and loss everywhere, for instance when Cześnikowa says that there is a shortage of men and too many girls because the men are all dead. This is the spirit in which the piece arose. I don’t condemn Moniuszko. The piece carries a very liberal message. It starts with ‘Nie ma niewiast w naszej chacie’ (‘No place for women in our house’) and ends with women showing that they can be enduring and strong. Back then, the point was: at least in our homes, in our households, we need to be strong. Since we are so devastated by people from the outside, let us have no divisions among ourselves. It’s a story of deradicalization and inclusion.

People only heard what they wanted to hear.

Exactly. There is this patriotic part in Moniuszko; it’s just not the only part. It’s not invented because he did say in a letter that he wanted to write an opera to comfort the nation, but this is not the entirety of Moniuszko. I’m more interested in Moniuszko’s liberal ideas.

Maybe that was kind of tongue-in-cheek? He had a great sense of humour, which is something you can sense from his letters.

I don’t think so. The figure of Damazy has plainly been created as a catalyst of bad virtues. He is the exact opposite of what a Polish person should be. Maybe Moniuszko was cynical in the way that he understood what people needed. He didn’t write the libretto, it’s also dangerous to forget that this is not Moniuszko writing, but it’s his opera in the end. You can see this opera is very aware of which values it wants to spread. This undeniably has a purpose of reinforcing some values, which back then had been very important for society. The figure of Damazy is everything that a Polish person shouldn’t be: not masculine and courageous enough, wearing ‘foreign frock’.

So, what about the music?

Oh, I love it. It’s such a shame that this music is not known much outside. But, there is no English edition. So it’s your fault (laughs). I had to have a word-for-word translation with a Polish person who told me what each word meant. That’s hard work and not everybody wants to do it.

Let me return to the question if you feel under pressure directing an opera that is highly-regarded in Poland. Especially since you are reinterpreting it.

I don’t feel under pressure. If you know what you want to do, nothing can stop you. And for me, there is only one way to approach the message of The Haunted Manor now, and it is my way. The topics are very clear. It is a gender conflict and a generational conflict. If you ignore these conflicts, you are going to fail. You have to take them and develop them. I think about Damazy and I say, what is my stand on this figure? Do I think that this is an antagonist? I think he is a modern hero. Do I think he’s really in love with Hanna, because in the text he’s always saying: I don’t care if it is Hanna, I don’t care if it is Jadwiga, I can marry either of them.

He’s very fluid. So I transformed him into a contemporary homosexual hero because all these characteristics are telling me that a group of people is mocking and bullying him in this piece. He’s a repressed person of our days. I cannot do a Damazy who is an antagonist with this characteristic – because I cannot believe that people who have such characters can be antagonists.

The premiere was postponed due to the pandemic. I’m sure that you’d have liked to have it premiere earlier but the global situation somehow only reinforces the message that you want to present.

Exactly! If you do The Haunted Manor right now without reinterpreting it, you are actually reinforcing a kind of ideology that I don’t want to stand for. But I’m doing it in a way that was actually set by the zeitgeist. The gender conflict is very topical. Hanna sings: we, Polish women, can be so strong, you have no idea. This is like a call of freedom for women, how can you ignore it? The central sentence is 'No place for women in our house!'. Why do the men say this? Because they hate 'lament żon' ['wife’s lament']. Because women are weeping all the time, and the men want to serve our country. In the end, the women win.
This is an incredible message, especially right now. Those women are the silent heroes because when men go to war – women stay home and take care of life really. This ties in with the whole discussion about unpaid labour, all this work that happens somehow 'invisibly.'

Do you feel it’s somehow harder for you as a woman to work in opera, especially as a director?

I have to admit: no. I would love to say ‘yes’, that I had to fight a lot in my life but this is not true. I’m also aware that there are not many women doing this but I never got the impression that people don’t respect me because of that.
I wouldn’t say I have to be three times more prepared than a man. I focus on being prepared better not because I’m a woman, but because I think a good director should be. I can also immediately recognize a man who’s unprepared. So, man or woman, if you’re not prepared and if you are not really dedicated, and you just come and do it in a cynical way, it’s going to be bad.

The questions were asked by Piotr Tkacz.