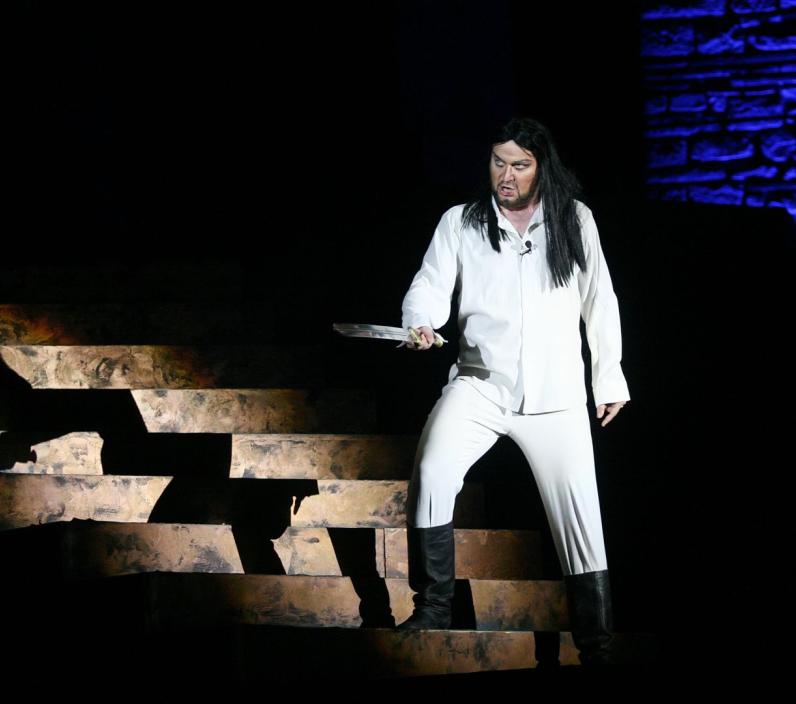 Verdi's Attila - The Territory of the Gods

A primitive and elemental world

History teaches us that Attila the Hun was a fearsome military leader, a ruthless and organised conqueror, the ‘scourge of God!’ Yet, in this opera, Attila is prey to wild dreams and victim of a priest in a white robe.

We have learned that Verdi was a patriot, who supported the cause of a united Italy. Yet, this opera’s Italians are bloodthirsty and treacherous. The native Italians are either terrorists or devious politicians. It is the savage who is noble. Or rather, it is Attila who is vulnerable to emotion, while his cool adversaries use intellect to destroy his threat. In this aim they are abetted by the elements, which combine to unsettle and then demolish the invader.

Attila inhabits a primitive world. Verdi and his librettist Solera are careful to evoke this antique world of simple values. Much is made of natural forces – the heavens, gods, the skies, elemental moments. The prologue’s second scene begins with a storm, yielding to a programmatic dawn unusual for Verdi. The movement from darkness to light is echoed by the movement from piano to forte, from major to minor, and the prolonged resolution of dissonant chords. After the purging fire of the sack of Aquilea come the watery lagoons of the Adriatic. Solera’s consciously poetic text speaks of earth and sky.

An opera of confrontation between individuals

One might expect Attila to be composed as a noisy Risorgimento opera, replete with patriotic choruses. On the contrary, the use of the chorus is strictly functional. Attila is an opera about confrontation between individuals. It is a story of four people. Its drama is conveyed in duets, trios, quartets. It does not echo Verdi’s patriotic operas like Nabucco and I Lombardi, but follows Ernani and prefigures Il trovatore.

The key relationship between Attila and Odabella is an attraction of opposites, but a sexual attraction nonetheless. Why else does Odabella keep postponing the murder of Attila? She has every reason to kill him: love of her country, of her father, of her betrothed Foresto. Yet she is fascinated by the invader. Odabella’s romanza at the beginning of Act 1, with its evocative prelude and beautiful cor anglais obbligato, is a poignant depiction of her tortured state. The image of her dead father gives way to that of her lost lover. She is haunted by ghosts. The subsequent reunion with Foresto is hardly reassuring. They have become uneasy lovers, undermined by suspicion and misunderstanding. Odabella’s assumption of the mantle of the biblical assassin Judith both shocks and inflames Foresto.

The atmosphere of mistrust derives from the secrecy necessary among resistance fighters. Odabella does not confide her plans even to her closest allies. This may appear cold-blooded, but it may be that her silence is cover for indecisiveness. Foresto’s generosity is likewise drained by his insecurity.

Ezio is a more calculating figure, but also lonely. Attila condemns him for offering to make a deal rather than standing firm and fighting. But Ezio also holds values and suppressed passions. They emerge in his scene at the start of Act 2, when he is alone at night, revealed against the background of the great city of seven hills. Ezio is in love with the idea of Rome. It burns in his heart, endowing him with a fearsome nobility.

There is something chilly about Ezio and his fellow conspirators. Their actions may be justified, but they remain unlovable. By contrast, Attila, for all his cruelty and autocratic manners, embodies a rough generosity of spirit that compels admiration. Unafraid in battle, he is yet shaken to his foundations by the vision of the old man who seizes him by the hair and smiles into his face. Attila is appointed scourge of mankind, but before Rome his path is barred. This is the territory of the gods.

As always with Verdi, it is the confrontations which inspire him. The great central scene of Attila’s dream is a prime example, but it is also clear that he was inspired by the other characters. He wrote about his source, Werner’s play:

‘There are three stupendous characters – Attila, who refuses to be thwarted by fate – Hildegonde [Odabella], a proud and really fine character obsessed with the idea of avenging her father and brothers and lover – and Aetius [Ezio] is very fine too, and I like that bit of dialogue with Attila where he suggests they share out the world between them. We ought to bring in a fourth strong character and I think it should be Walther [Foresto] who believes that Hildegonde is dead, and has somehow escaped’.

Solera, the extravagant patriot, wished to end the opera with a great choralhymn of thanksgiving, but he was called away by other commitments, and Verdi reverted to Piave for the final scene of the opera. Piave’s completion has been criticised as perfunctory, but it has its own inexorable logic. After the grandiose scenes and images – the sacked city of Aquileia and the city of Venice rising from the lagoon; the Pope before Rome and the torchlit banquet – Act 3 benefits from a remarkable concentration and terseness. It moves from Foresto’s lonely despair to his duet with Ezio to the trio joined by Odabella to the concluding quartet of the principals. The whole act lasts little more than 15 minutes. The cynical will say that this is Verdi, ill and exhausted, clearing the decks before collapsing. If so, it is a bold and risky achievement so to expose his four characters to the mercy of the elements, naked before the gods.