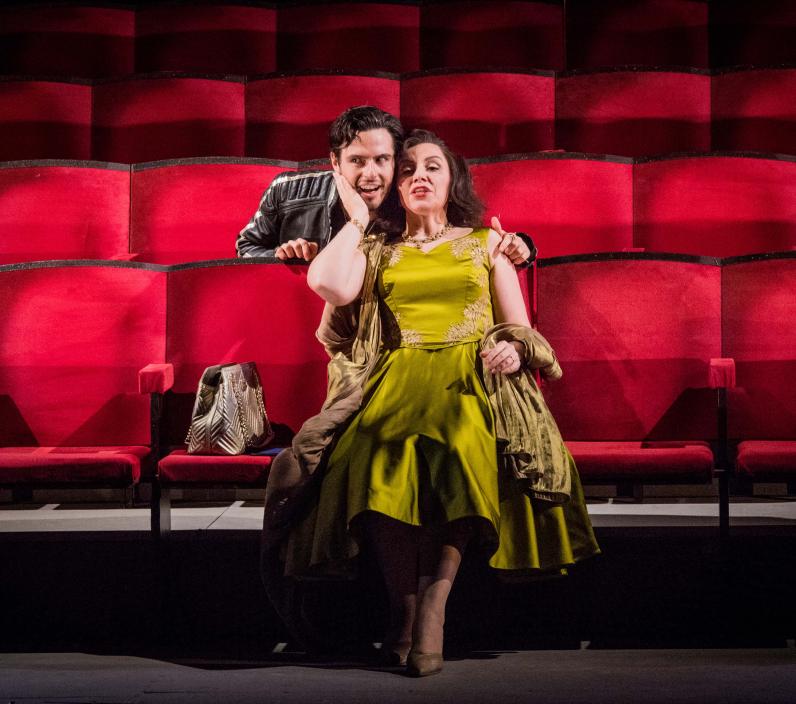 With her husband apparently drowned at sea, a scheming empress secures the throne for her son from another marriage. But the commander of the army has other ideas, and then the emperor returns, very much alive.

The inspired vision of director Walter Sutcliffe and designer Jon Bausor brings to life the humour and egomania of one of opera’s most outrageous leading women. The youthful Handel packed Agrippina with the full range of his astonishing imagination, setting a libretto at once hilarious, moving and clever. Handel’s music is bursting with originality and fun, as well as carefully considered moments of eye-watering beauty.

Poppaea (Stefanie True) has been falsely told that Otho will give her up in exchange for the throne. Her love for him starts to turn into fury and she promises to take revenge if the rumour turns out to be true. Conducted by Robert Howarth and directed by Walter Sutcliffe.

Agrippina (Anna Bonitatibus) wants Nerone, her son from a previous marriage, to accede to the throne now that Claudio, her husband, has apparently drowned at sea. While a political storm brews in Rome, she remains calm, confident that her deceitful plan will work. Conducted by Robert Howarth and directed by Walter Sutcliffe.

When her husband, the Roman emperor Claudio, has apparently drowned at sea, Agrippina plots for her son from a previous marriage, Nerone, to be Claudio’s successor. In fact, the emperor has been saved from death by the commander of the army, Ottone, and the imminent coronation of Nerone is abandoned. Ottone tells Agrippina that Claudio, in gratitude, has appointed him his successor. He also tells her that he, Ottone, has fallen in love with Poppea, and that he desires her more than he desires the throne. Agrippina, aware that Claudio also loves Poppea, sees a new opportunity of furthering her ambitions for Nerone. She goes to Poppea and tells her, falsely, that Ottone has struck a bargain with Claudio whereby he, Ottone , gains the throne but gives Poppea to Claudio. Agrippina advises Poppea to turn the tables on Ottone by telling the emperor that Ottone has ordered her to refuse Claudio's attentions. This, Agrippina believes, will make Claudio revoke his promise to Ottone of the throne.

Ottone is ready for his coronation but Claudio instead denounces him as a traitor. Devastated and bewildered, Ottone appeals to Agrippina, Poppea and Nerone for support, but they all reject him. Poppea is touched by her former beloved’s grief and begins to doubt his guilt. Eventually Ottone convinces her of his innocence and Poppea swears revenge, but she is distracted when Nerone comes forward and declares his love for her. Meanwhile, Agrippina convinces Claudio that Ottone is still plotting to take the throne and advises him to abdicate in favour of Nerone. Claudio agrees, believing that this will enable him to win Poppea.

While Ottone and Nerone hide in her bedroom, Poppea explains to Claudio that he had earlier misunderstood her: it was not Ottone but Nerone who had ordered her to reject his attentions. Claudio angrily dismisses his stepson. Nerone informs his mother of Poppea's treachery and of his decision to renounce love for political ambition. Agrippina confronts Claudio, berates him for succumbing to Poppea's influence, and claims that Ottone loves Poppea, thereby forcing Claudio to summon all three of them. He announces that Nerone and Poppea will marry, and that Ottone shall have the throne. No one is satisfied with this arrangement, as their desires have all changed, so Claudio, in a spirit of reconciliation, reverses his judgement, giving Poppea to Ottone and the throne to Nerone.

5 things to know about Agrippina

1. Opera fit for a carnival

Agrippina is an opera seria in three acts by Georg Friedrich Handel to a libretto by Cardinal Vincenzo Grimani. The opera was composed for the carnival season of 1709-10 in Venice and tells the story of Agrippina, Nero's mother, who plans to overthrow Roman emperor Claudius and insert her son into his place. Grimani's libretto, considered one of the best that Handel put into music, is an anti-heroic, satirical comedy, full of references to Rome's political life.

2. Trouble by the Tiber

Born in AD 15, Agrippina the Younger was a Roman empress and one of the more prominent women in the Julio-Claudian dynasty. Ancient sources describe her personality as ruthless, ambitious, violent, and domineering. Physically she was a beautiful woman; according to Pliny the Elder, she had a double canine in her upper right jaw, a sign of good fortune. Her third husband was Emperor Claudius, whom she successfully persuaded into adopting Nero, her son from a previous marriage, and making him his successor. When Claudius began to waver and favour another of his sons, Agrippina reportedly poisoned her husband with a plate of deadly mushrooms. Nero acceded to the throne but his mother continued to control him and the empire. According to Tacitus, she opposed Nero’s affair with Poppaea Sabina, wife of Otho, and so the emperor stripped his mother of her titles and power before eventually having her assassinated in AD 59.

3. An invitation to Italy

After dabbling in German-style operas during his early years in Hamburg, Handel travelled to Italy on an invitation from a member of the House of Medici. He stayed for three years to study Italian music and develop his talent as a composer. While in Florence in 1707 he wrote his first Italian opera, Rodrigo, but it was not particularly successful. He moved to Rome and focused on composing cantatas and oratorios, since opera performances were banned by a papal decree. There, he was introduced to Cardinal Vincenzo Grimani, a prominent diplomat who wrote librettos in his spare time and acted as an unofficial theater agent for the royal courts in Italy. He took Handel under his wings and gave him his libretto for Agrippina.

Grimani was politically allied to the Habsburgs. He protected their interests at the Vatican, which led to frequent clashes with Pope Clement XI. His portrayal of Emperor Claudius in Agrippina has been seen as an oblique attack on the character of the pope. Borrowing the same setting as Claudio Monteverdi’s 1642 opera L'incoronazione di Poppea, Grimani’s libretto is much lighter in tone by comparison and is interesting for its dominance of arias over recitative. Handel set the cardinal’s text to music either in Naples or Venice and the completed opera was first produced in 1709 at Teatro San Giovanni Grisostomo, a Venetian theatre owned by the Grimanis. It proved an immediate success and an unprecedented series of 27 consecutive performances followed. The audience, thunderstruck with the grandeur and sublimity of his style, applauded for Il caro Sassone (‘the dear Saxon’), referring to Handel's German origins.

Despite the public's keen enthusiasm for the work, Agrippina saw only a few sporadic performances in the years after its premiere. By the mid-18th century, it had slipped into oblivion along with much of Handel’s other music. The 20th century, however, saw a renewed interest in the composer and his works. The opera was revived in Halle in 1943 and since then has become popular around the world, particularly in the United Kingdom and the United States of America. This new production by director Walter Sutcliffe takes place at The Grange Festival in Hampshire, a county that Handel visited a number of times after he settled in London. Robert Howarth conducts the Academy of Ancient Music, an orchestra with a worldwide reputation for excellence in baroque and classical music and which uses historically informed techniques and period-specific instruments to bring the music to life.