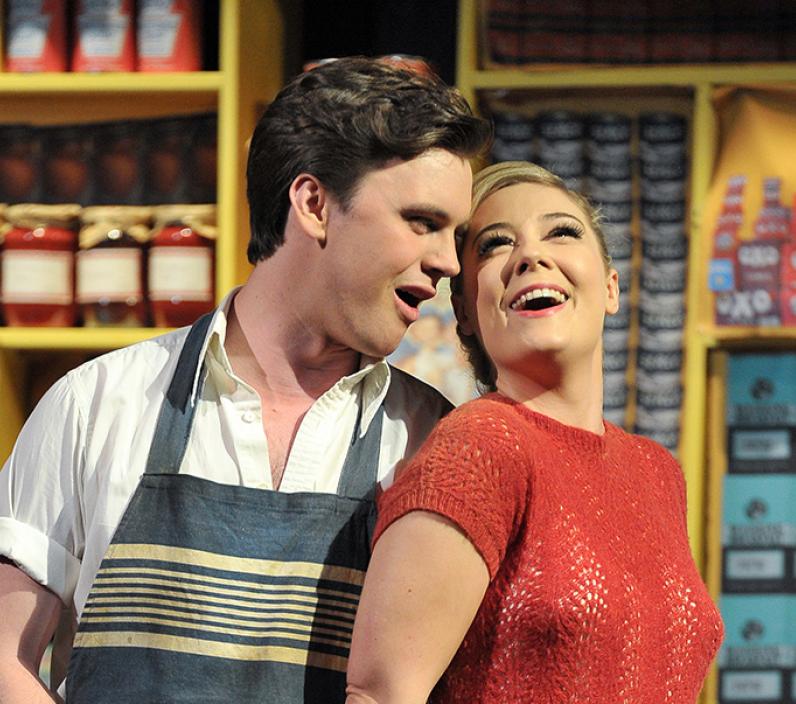 A shy greengrocer is elected May King after all the girls in town are found unworthy of being Queen. With the help of a spiked drink he breaks free of society’s expectations and learns to stand up for himself.

In the church hall of a small Suffolk market town, Lady Billows is chairing a committee meeting to choose a suitable girl to be crowned May Queen. Her housekeeper, armed with reports of unworthy behaviour, condemns each and every one and eventually none are left. But why should virtue be a prerogative of the female sex? The unusual idea of a May King is proposed and they choose to honour Albert Herring, the son of the widowed greengrocer. His reputation is spotless, and his shyness and fear of girls notorious, and the whole committee sallies forth to deliver the good news to Albert and his mother.

At the Herring’s greengrocer shop that same day, Sid, the butcher’s assistant, teases Albert for his inexperience. Albert is uncomfortable at seeing Sid openly seducing Nancy but it provokes him to question his simple life and his mother’s hold over him. When Lady Billows and her entourage come to congratulate Albert on being chosen as May King, Mrs Herring is thrilled but Albert is worried that it will make him the laughing stock of the town.

Three weeks later, May Day has finally arrived. In the church hall, Florence and Nancy hurry to finish setting up for the town feast. Sid has an idea for making mischief and leaves with Nancy to tell her the plan to her. When they return to serve lemonade for the feast, Sid spikes Albert’s lemonade with rum. The guests arrive, soon followed by Albert. Lady Billows begins the festivities with a grand welcome that turns into a passionate sermon warning the town’s youth against immorality. The ceremony ends with a toast to Albert and to Lady Billows. Albert drains his cup of spiked lemonade, which gives him hiccups.

After the festivities, an inebriated Albert returns home. He hears whistling from outside: it is Sid calling for Nancy outside her window. She comes out into the street and they laugh about Albert’s appearance and personality. In the course of their conversation, Albert discovers that Sid slipped rum into his drink. After he hears the lovers caressing in the street, Albert cannot bear the yoke of his chastity any longer. He sets off with his prize money to have a little adventure of his own, just missing his mother as she returns home.

The following morning, Albert’s disappearance has thrown the town into an uproar. Nancy berates Sid for not being more concerned about his disappearance. Mrs Herring, utterly distraught and convinced Albert must be dead, keens over the one photograph she has of her son. When the police find Albert’s May Day wreath run over in the road, Mrs Herring and the townspeople believe this confirms Albert’s death and they join together in a threnody of lamentation. Albert finally returns, and when the town elites demand to know where he has been, Albert confidently relates a night of drunken debauchery. His description of his evening of sin shocks and appals his mother and the village elite, while Sid and Nancy are suitably impressed. With his newfound self-assurance, Albert flings away his coronation wreath, secure in the knowledge that he can see a future where he will finally be true to himself.

5 things to know about Albert Herring

Born on St Cecilia’s Day in the fishing port of Lowestoft, Suffolk, Benjamin Britten was a prolific and successful composer from an early age. A pacifist and conscientious objector who sought to escape the looming war in Europe, he and his partner Peter Pears left England in 1939 to follow their friends, the poet WH Auden and the novelist Christopher Isherwood, to the USA. There, Britten chanced upon the 18th century poems of George Crabbe, which were rooted in the Suffolk landscape. Feeling homesick, the composer and Pears returned to England in 1942. Accepted as a conscientious objector, he set about writing his first opera, Peter Grimes, based on Crabbe’s tragic poem about a fisherman in Aldeburgh, ‘The Borough’. Its triumphant premiere in London one month after the end of the War in Europe spurred him on to write his second opera, The Rape of Lucretia. He completed it in just four months but its subsequent tour of England’s provincial cities was a costly financial failure. Deciding that a comedy would attract a larger audience, Britten spent the winter of 1946 and the spring of 1947 composing Albert Herring, his third opera and his second to be set in Suffolk.

The British theatre director and opera librettist Eric Crozier had a long association with Britten. He directed the composer’s first opera, Peter Grimes, at Sadler’s Wells in 1945, as well as his second, The Rape of Lucretia, at Glyndebourne the following year. They co-founded the English Opera Group and were co-founders and joint Artistic Directors of the Aldeburgh Festival. A committed Francophile, it was Crozier who suggested adapting Guy de Maupassant’s novella Le Rosier de Madame Husson into a chamber opera and transposing the action to a fictitious town in Suffolk. Instead of inviting another librettist, Britten asked Crozier to write the text for Albert Herring himself. In it, he wrote the character of Nancy for his future second wife, Nancy Evans, a mezzo-soprano who had co-created the role of Lucretia alongside Kathleen Ferrier. Crozier’s and Evans’s archives are preserved in Aldeburgh.

So as to have full artistic, financial and administrative control over their ventures in staging new English operas, Britten, Crozier and artist John Piper founded The English Opera Group. It was incorporated on a non-profit-making basis and aimed to give annual seasons of contemporary opera in English as well as suitable classical works, including those of Purcell. In early 1947 the Group published a pamphlet announcing their formation to the public: “We believe the time has come when England, which has never had a tradition of native opera, but has always depended on a repertory of foreign works, can create its own operas. Opera is as much a vital means of artistic expression as orchestral music, drama, and painting. The lack of it has meant a certain impoverishment of English artistic life.” At the time of the pamphlet’s publication Britten was already writing his third opera, Albert Herring. Its first performance and a revival of The Rape of Lucretia formed the Group’s first season, which opened at Glyndebourne on 20 June of the same year. The Group would go on to premiere several new operas, including William Walton’s The Bear and Harrison Birtwistle’s Punch and Judy, before it disbanded in 1980 following a final production of Britten’s A Midsummer Night’s Dream.

Albert Herring, Britten’s third opera, is a light-hearted comedy set in the quaint Suffolk town of Loxford, a fictional place that bears a striking resemblance to the real-life Suffolk village of Tunstall. It seems a world away from the cruel final days of the Roman Kingdom as depicted in the composer’s second opera, The Rape of Lucretia, which in turn could hardly be more different from the grand orchestral seascapes found in his first, Peter Grimes. Nevertheless, all three share persistent themes, principally the corruption of innocence, the place of the outsider in society and, as Britten summarised his first opera, “the struggle of the individual against the masses.” Peter and Albert are each a victim of small-town suspicion and condemnation in their own different ways. Likewise, both Lucretia and Albert are virtuous exceptions among their libidinous peers. Of the three, however, it is only Albert who avoids a tragic fate, which he achieves by subverting social expectations and willingly corrupting his own innocence.

The Royal College of Music International Opera School is a specialist community where the very best young singers from all over the world gather to work with leading professionals and prepare for international operatic careers. Dame Joan Sutherland, Sir Thomas Allen, Dame Sarah Connolly and Gerald Finley are among the host of celebrated stars who began their careers there, as is the acclaimed Scottish soprano Janis Kelly, who plays Lady Billows in this performance. The conductor is Michael Rosewell, Director of Opera at the Royal College of Music and Music Director of English Touring Opera. He is recognised as a leading interpreter of Britten’s music and is the only conductor invited to conduct A Midsummer Night's Dream in the Jubilee Hall at the Aldeburgh Festival, since Britten himself conducted the world premiere there in 1960.