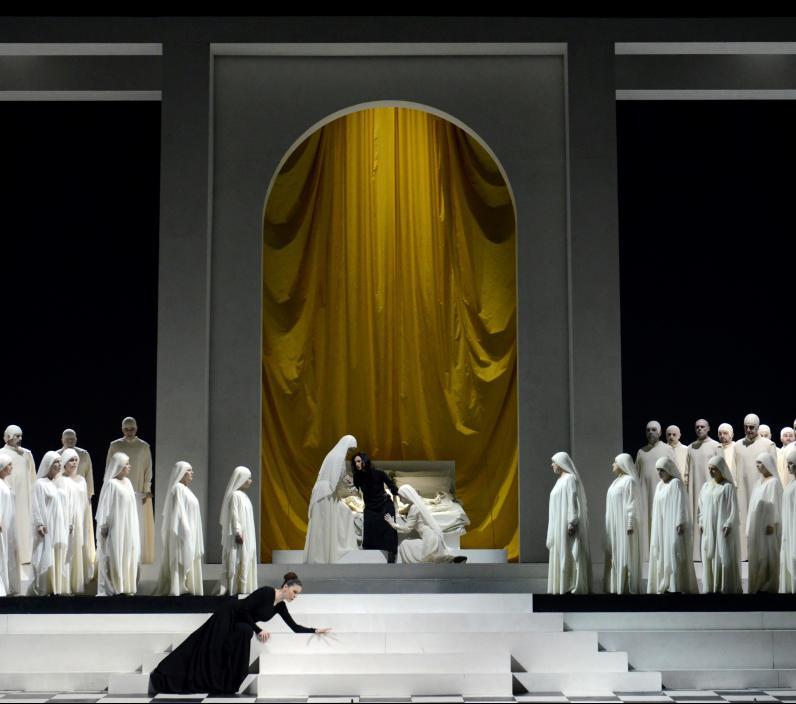 At death’s door, a beloved king is doomed unless someone takes his place. So then his wife resolves to sacrifice herself to save him.

Christoph Willibald Gluck composed his reform opera Alceste not once, but twice. In La Fenice’s production of the lesser-known original Italian version, director Pier Luigi Pizzi strips the action down to the bare emotional drama of Alceste’s sacrifice.

Act I. Apollo’s oracle pronounces his verdict: Admetus will die unless someone else is sacrificed in his place. Initially aghast and confused, Alcestis wonders who might love Admetus so much that they would sacrifice their own life. She decides to offer her own life in exchange for her husband’s. Directed by Pier Luigi Pizzi and conducted by Guillaume Tourniaire.

Act II. When Alcestis admits to her dying husband King Admetus (Marlin Miller) that she has promised herself to the gods in exchange for his recovery, he is furious. He refuses Alcestis’ sacrifice, putting her love before her duties as a wife and mother. Directed by Pier Luigi Pizzi and conducted by Guillaume Tourniaire.

In the main square in the city of Pherae in Thessaly, the town crier is announcing King Admetus’ imminent death to his sorrowful people. The King’s confidant, Evander, is asking the people to offer sacrifices to the gods and consult an oracle, asking for advice. Admetus’ wife, Alcestis comes out of the palace with her children Eumelus and Aspasia. The Queen also wants to join the people in the sacrifice and consult the oracle.
In Apollo’s temple, the high priest and his ministers are invoking god and offering sacrifices. Alcestis arrives with her retinue and makes a sacrifice to god. Her sacrifice is accepted; the temple is illuminated, perfumed and begins shaking. Apollo’s oracle pronounces his verdict: Admetus will die unless someone else is sacrificed in his place. Initially aghast and confused, Alcestis wonders who might love Admetus so much that they would sacrifice their own life. She decides to offer her own life in exchange for her husband’s. Evander and the confidant Ismene rush to tell her that Admetus, on his death bed, is asking to see his wife one last time. Once Alcestis has left, the priests and people join Evander and Ismene to discuss the latest turn of events – all unaware of the Queen’s vow. Nobody has the courage to offer their own life to save the King.

At night, Ismene tries to stop Alcestis in vain going into the sacred woods dedicated to the gods of the underworld. When she hears an unknown voice in the woods, Alcestis is terrified. Her courage gradually returns and, despite the warnings from the infernal gods, she takes the oath that condemns her to death in Admetus’ place. Alcestis asks the gods to be allowed to embrace her husband and children one last time before descending into Hades, and they consent.
In the palace, the courtiers are celebrating the King’s unexpected recovery. Evander also joins in the rejoicing and tells the King about Apollo’s oracle, certain that someone has sacrificed their own life for his good health. While the King is praising the generosity of this anonymous hero, Alcestis arrives with her retinue. Admetus runs to embrace his wife and does not understand why she is visibly upset and refuses to answer his questions. The Queen gradually gives in: she reminds Admetus about Apollo’s oracle and reveals she has promised herself to the gods in exchange for the King’s recovery. Admetus is furious. He refuses Alcestis’ sacrifice, putting her love before her duties as a wife and mother. He leaves with Evander to return to the oracle, convinced this response was wrong or misconstrued. Once she is left alone with Ismene and her ladies-in-waiting, Alcestis feels her strength fading and prepares herself for death, much to the sorrow of her confidant and retinue. She then gets up to take her children to Admetus so he can look after them.

Admetus is telling Evander that Apollo’s oracle remained silent. Admetus cannot die for his wife, so he must resign himself to her death. While the King is lamenting his fate, Alcestis arrives with the children, Ismene and her retinue. In exchange for her sacrifice, the Queen asks Admetus never to marry again. She then entrusts the two young children to the King and says farewell. Alcestis asks her children to look after her tomb. While everyone is lamenting the Queen’s fate, a group of infernal gods burst into the room: her time is up, Alcestis has to go to the underworld. Admetus offers himself one last time instead of his wife, drawing his sword to defend her but it is all to no avail. Alcestis is led away by the gods of Hades. Distraught, Admetus wants to take his own life so he can join his wife straightaway. However, Evander and Ismene stop him, pointing at a bright flash up in the clouds. Apollo himself comes down from the skies and turns to the King. The gods took pity on the couple and are returning Alcestis, who embraces her husband and children. The King orders another sacrifice straightaway to thank Apollo.

The original Italian version of Gluck’s Alceste, first performed in Vienna in 1767, is the purest example of his artistic credo. His purposes were none less than to reform opera and purge it of the excesses and distractions which it had accumulated. He wanted to return to the model of ancient Greek tragedy; to reinstate the importance of words; and to write music which illustrated and drove forward powerful stories.

Gluck’s unflinching ideals were what endeared him to the greatest reformers of grand opera during the 19th century, Wagner and Berlioz, each of whom prepared edited versions to bring his operas back into public performance. Wagner presented an adapted and rescored German version of Gluck’s Iphigenia in Aulis in Dresden in 1847. Berlioz reworked Orpheus and Eurydice for performance in Paris in 1859.

Orpheus remains Gluck’s most often performed score, and its original Italian version of 1762 was the first of his ‘reform’ operas, though it was his 30th work for the stage in a career of already 21 years. But it was the preface to Alceste which set out his manifesto:

When I undertook to write the music for Alceste, I resolved to divest it entirely of all those abuses, introduced by the vanity or by the too great complaisance of composers, which have so long disfigured Italian opera and made of the most splendid and most beautiful of spectacles the most ridiculous and wearisome. I have striven to restrict music to its true office of serving poetry by means of expression and by following the situation of the story, without interrupting the action or stifling it with a useless superfluity of ornaments [...] I believed that my greatest labour should be devoted to seeking a beautiful simplicity…

There is a general consensus that Gluck’s substantially revised version of Alceste, composed for performance in Paris in 1776, is the superior work, musically more sophisticated and dramatically more varied by reinstating the semi-comic character of Hercules from the source play by Euripides into the last act. But it is the earlier Italian version that best embodies his stated ideals, and which exhibits an unswerving and monumental integrity which can be overwhelming in a fine performance, such as that provided by Teatro La Fenice.

Director and designer Pier Luigi Pizzi employs his trademark elegance to depict an antique world with clear modern lines: classical arches; a restricted palette of mainly white, gradually invaded by funereal black after Alceste makes her fateful decision to sacrifice her life for her husband; an economy of movement so that every gesture tells. Carmela Remigio’s sculpted face and figure enhance her clear diction and silver tones to create a dignified and believable heroine. Marlin Miller combines heroic sound with genuine anguish as her desperate husband Admetus. Even the children make an impression among the strong supporting cast and disciplined chorus. French conductor Guillaume Tournaire exerts stylish control of La Fenice’s forces.

The power of Gluck’s vision in this opera made an indelible impression on the young Mozart, when he attended rehearsals for the premiere in Vienna. Gluck’s music moves at a statelier pace than the more volatile Mozart’s, but the younger composer learned from the elder’s word-setting and, eventually, from his treatment of the chorus as an integral component of the drama. The evidence only arrives with the also classically-inspired Idomeneo of 1780/81.  Mozart’s first operatic masterpiece travels beyond Gluck, but is firmly founded on his aesthetics.

Today, we need the antipodes of both Mozart and Gluck: Mozart for his unsurpassed humanity and insights into its fallibilities as well as its aspirations; Gluck for his nobility, and, in our confused 21st century, for his beautiful simplicity.