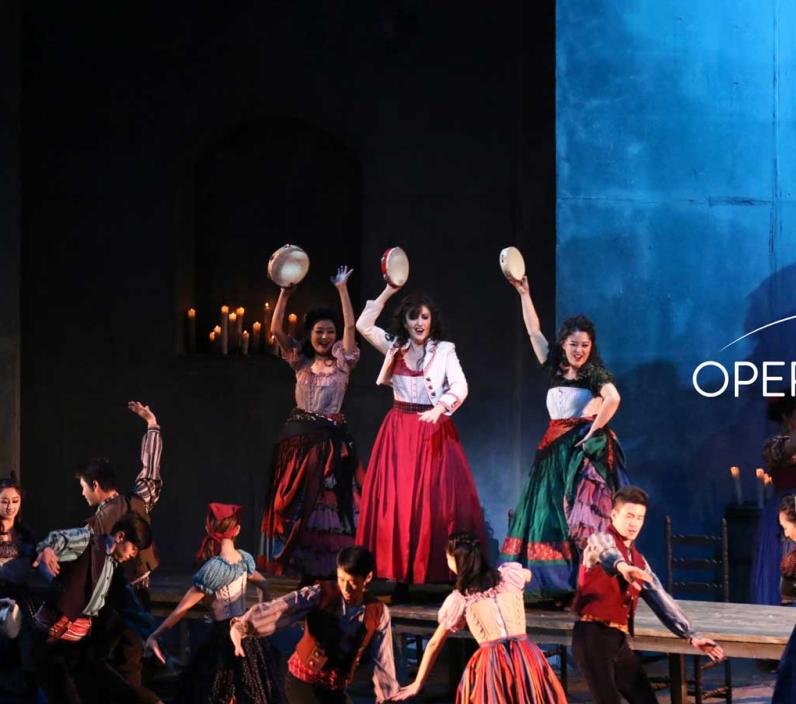 Bizet
This performance is no longer viewable as video-on-demand for rights reasons but other material about the production is still available.

When a free-spirited Gypsy is arrested, an impressionable soldier is charmed into letting her go. But having risked everything to be with her and lost, his hopes of happiness soon turn into a jealous rage.

With equal parts danger and desire, Carmen is an intoxicating cocktail that never fails to excite the senses. Spanish mezzo-soprano María José Montiel plays the seductive sevillana in this festive production from ‘The Giant Egg’ in Beijing. Streamed on Bizet’s birthday, this performance is part of OperaVision’s events celebrating the inaugural World Opera Day on 25 October 2019.

Act II. In a small tavern, Carmen, her friends and military officers are drinking in high spirits. A matador called Escamillo (Yuan Chenye) drops by and flirts with Carmen, who brushes him aside. Conducted by Zhang Guoyong and directed by Francesca Zambello.

Act III. Searching for Don José, Micaëla (Zhou Xiaolin) finds herself alone in the mountains. Frightened, she prays for courage. Conducted by Zhang Guoyong and directed by Francesca Zambello.

On a plaza in Seville, a village maiden called Micaëla looks for but fails to find her fiancé, Don José, a Corporal of Dragoons. During their midday break, workers from the tobacco factory gather in the plaza. Among them is Carmen, an attractive Gypsy woman, who refuses all her admirers except José. She throws a flower at his face before slipping away. After the break has finished, José secretly picks up the flower.

Micaëla finally finds José and hands him a letter from his mother. A riot suddenly breaks out at the tobacco factory when Carmen get into a fight with another factory worker, injuring her with a knife. Carmen is accordingly arrested and José is put in charge of guarding her. Beguiled by her dancing, the Corporal lets her go and is duly arrested himself for dereliction of duty.

In a small tavern two months later, Carmen, her friends and military officers are drinking in high spirits. A matador called Escamillo drops by and flirts with Carmen, who brushes him aside. Two smugglers try to rope Carmen into helping them with their latest mission, but she rejects their offer as she is waiting for Don José, who has just been released from detention.

When José arrives at the tavern, Carmen treats him to a private dance. She demands he shows his love for her by leaving, but José refuses to desert. Just as he prepares to return to his barracks, the Lieutenant of Dragoons enters looking for Carmen. He and José fight, and are separated by the returning smugglers. Having attacked a superior officer, José now has no choice but to join Carmen and the smugglers.

Don José, Carmen and other smugglers are living in the surrounding mountains. José feels regret for how he has abandoned his mother and Micaëla. The young man becomes enraged, and Carmen realises that she may be killed by him someday. Micaëla, who still loves José, risks her life to find him. At the same time, Escamillo looks for Carmen but comes across José instead. Realising what the matador intends to do, José is overwhelmed with jealousy and decides to kill him, but the smugglers interrupt them just in time. Micaëla is discovered and asks José to return home with her. Despite Carmen’s mockery, he at first decides to stay put, but then agrees to leave when told that his mother is gravely ill.

Spectators and peddlers throng in front of the bullring. Escamillo enters the arena for his fight, but Carmen decides to stay outside and speak with Don José. He arrives in ragged clothes begs and begs her for forgiveness, but she remains unrepentant. They hear loud cheering and applause from the arena, a sign that Escamillo has been victorious. Carmen wants to rush towards the ring to join in with the celebrations, but José prevents her from doing so. Ablaze with anger, and he draws his dagger and stabs her. As the crowd leaves the arena, they find Carmen lying in a pool of blood and José crying out, admitting his crime.

5 things to know about Carmen

After the success of Djamileh at the Opéra-Comique in Paris, Georges Bizet was commissioned to write another work for the theatre. His proposal to base it on Prosper Mérimée’s novella Carmen, however, met with some resistance, as the theatre administrators felt that the subject matter would be too challenging for a family audience. Bizet was forced to change his piece on a number of points and to elevate the role of Micaëla and other more conventional characters. 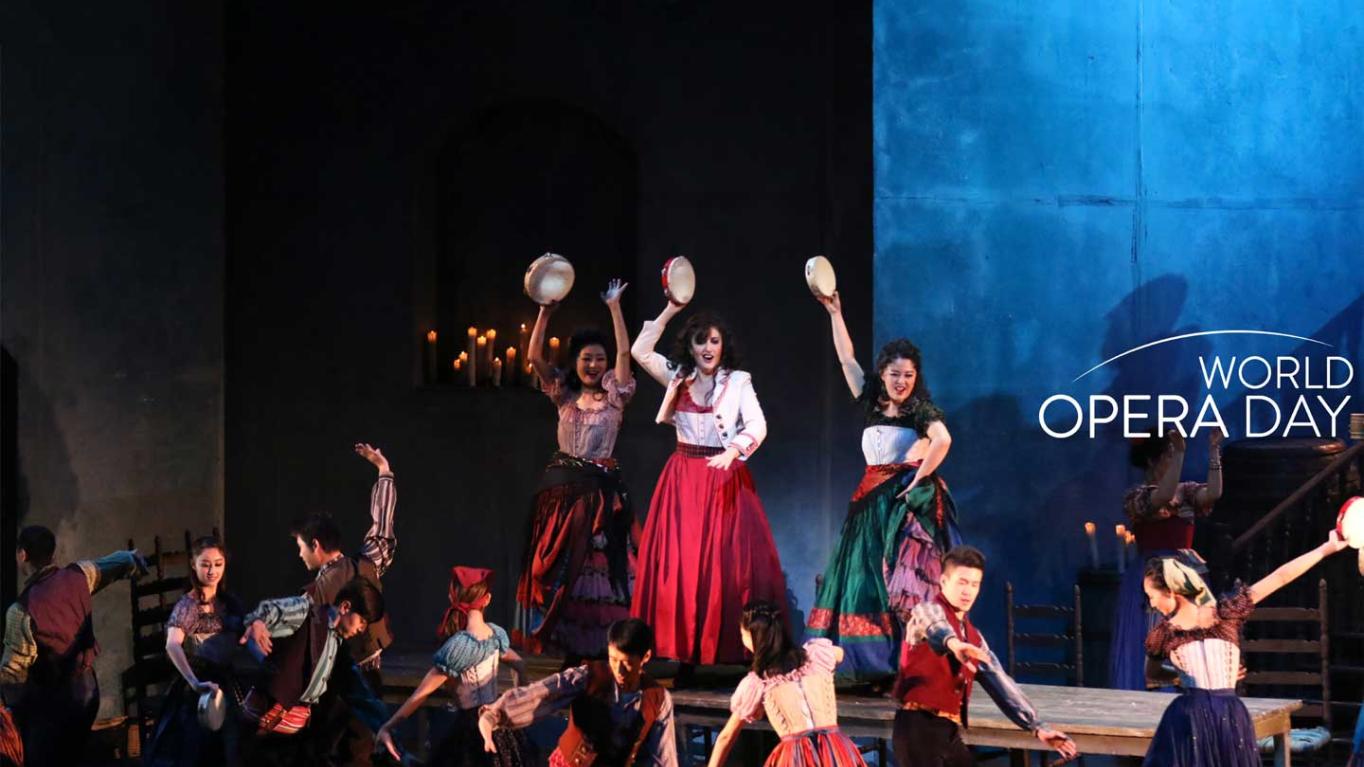 At the premiere in March 1875, Carmen nonetheless shocked the audience and caused a scandal due to its violation of contemporary conventions. The Opéra-Comique persevered but after 11 months and 48 performances it was taken off the stage and would not be revived there for another eight years. Meanwhile, the work became very popular outside of France; by the end of 1878, successful performances had taken place in Antwerp, Brussels, Budapest, Dublin, London, New York, St Petersburg, Stockholm and Vienna.

The story is set in southern Spain and tells the story of the downfall of Don José, a naïve soldier who is seduced by the wiles of the fiery gypsy Carmen. José abandons his childhood sweetheart and deserts from his military duties, yet loses Carmen's love to the glamorous torero Escamillo, after which José kills her in a jealous rage. The depictions of proletarian life, immorality, and lawlessness, and the tragic death of the main character on stage, broke new ground in French opera and were highly controversial. Carmen forms the bridge between the tradition of opéra comique and the realism or verismo that characterised late 19th-century Italian opera.

This performance from the National Centre for the Performing Arts in Beijing is streamed on Bizet birthday as part of OperaVision’s series of events celebrating the inaugural World Opera Day on 25 October 2019. This initiative is an awareness campaign about the positive impact and value of opera for society. Opera, like other arts, contributes to developing tolerance and understanding, opening minds and connecting people with strong, universal emotions. Just as sport shapes a healthy body, the arts shape a healthy mind.

Bizet died suddenly after the thirty-third performance of the opera, not knowing that his work would gain international recognition over the next ten years. Carmen has since become one of the most popular and most frequently performed operas in the repertoire. Over the years, the score has been subject to significant changes, including the introduction of recitative instead of original spoken dialogue. There is no standard edition of the opera, and there are different opinions about which versions best reflect Bizet's intentions. The opera is highly regarded for its musical qualities, particularly its use of Spanish-inspired melodies and rhythms. The ‘Habanera’ from Act I and the ‘Toreador Song’ from Act II are now among the most famous of all opera arias.