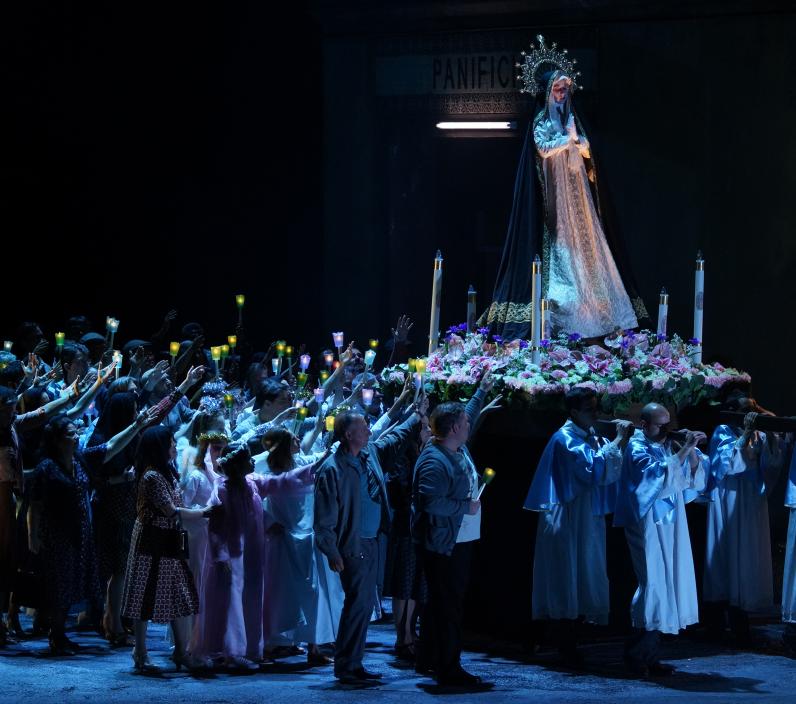 Mascagni / Leoncavallo
This performance is no longer viewable as video-on-demand for rights reasons but other material about the production is still available.

Santuzza has revealed to Alfio the affair between her husband and his wife. Santuzza’s act cannot be undone, and has stirred Alfio’s wrath who swears revenge. The Cavalleria rusticana intermezzo imagined by Damiano Michieletto contrasts here with the budding love of Nedda and Silvio in the following opera, Pagliacci.

Act I. Canio (Carlo Ventre) has just discovered that his wife has been unfaithful. As he prepares to make his appearance on stage as a clown, he feels confused and doesn't know who he is anyway – himself or his foolish character. Conducted by Evelino Pidò and directed by Damiano Michieletto.

Santuzza (Eva-Maria Westbroek) is about to enquire about Turridu’s whereabouts to Mama Lucia (Elena Zilio), her mother-in-law. They are interrupted by the procession in the village, which celebrates Easter. Santuzza’s despair is clear...

Prologue. Tonio (Scott Hendricks) is dressed as his character Taddeo, and addresses the audience, reminding them that actors are real people. Conducted by Evelino Pidò and directed by Damiano Michieletto.

Eva-Maria Westbroek: 'I could write a book about how much I love this repertoire!'. The Dutch soprano talks about her character Santuzza in Cavalleria rusticana and her passion for verismo opera.

In this interview, stage director Damiano Michieletto explains why Cavalleria rusticana and Pagliacci are often performed as a double bill, and shares his vision of the two operas.

This performance is no longer viewable as video-on-demand for rights reasons but other material about the production is still available here.

It is Easter morning. In the main square of the village, Turridu is singing a siciliana (‘O Lola ch’ai di latti la cammisa’/'O Lola! like the snow, pure in thy whiteness!') Lucia has a wine shop to one side of the square beside the church; nearby is the house where she and her son Turridu live. Villagers wander about, singing about the beautiful spring day.

For context, it is important to note that Turridu has returned from the military and has discovered that his fiancée Lola married Alfio, a carter, while he was away. Turridu was heartbroken and avenged himself by seducing Santuzza, another young woman in the village.

Santuzza searches for Turridu and is upset because she suspects Turridu is not over Lola and has been with her once more. His mother Lucia tells Santuzza that he went to the next village to fetch more wine, but Santuzza saw him last night in their village and is unconvinced. Lucia invites Santuzza in but Alfio interrupts, arriving on his wagon with a group of villagers. He brags about his new wife, Lola, and asks Lucia for a fine wine. Again Lucia says that Turridu has gone to fetch wine from another village, and Alfio claims he has also seen him.

After Alfio leaves, Santuzza meets Lucia again outside the church. Lucia demands to know why Santuzza did not admit to Alfio that she also saw Turridu in the village. ‘Voi lo sapete,’(‘you well know,’) replies Santuzza. She admits to Lucia that Turridu seduced her and then had an affair with Lola. Lucia is sympathetic. When Turridu arrives, Santuzza accuses him of being with Lola, not having gone to fetch wine as he had told his mother. Turridu pushes her to the ground. When Alfio returns, Santuzza tells him that Lola betrayed him by returning to Turridu. Alfio swears he will have his revenge.

Turridu invites the villagers to his mother’s shop and brings Lola. Everyone is in high spirits, but there is tension in the air when Alfio arrives and refuses Turridu’s offer of wine. All the women leave, including Lola, and Alfio challenges Turridu to a duel.

As the opera ends, the villagers cry that Turridu has been killed. Santuzza and Lucia collapse from grief.

The story follows a group of actors in the 1800s who play traditional Italian Commedia dell’arte characters.

Tonio is dressed as his character Taddeo,  and addresses the audience, reminding them that actors are real people.

The Commedia actors enter a village in the afternoon. Canio describes last night’s performance, about the troubles of Pagliaccio. Canio and Tonio seem to have a rivalry regarding Nedda, Canio’s wife.

At the local tavern, Canio and Beppe drink, but Tonio doesn’t join them. The villagers joke that Tonio wants to have an affair with Nedda. Indeed, when they are alone, Tonio confesses that he loves Nedda, but she only laughs at him. However, Nedda actually has a lover, Silvio, who asks her to elope with him. Nedda agrees, but Tonio has overheard the lovers’ conversation.

The crowd arrives for the evening’s performance and Nedda, dressed as Colombina, takes their admission fees. In the play, art begins to blur the borders with life: Colombina’s (Nedda’s) husband Pagliaccio (Canio) has gone away for the night. Taddeo (Tonio) is at the market. Colombina waits for Arlecchino (Beppe), her lover.

As the performance continues, Canio becomes jealous and begins to mix play and reality. He demands to know the name of Nedda’s lover, and he means it in the real-life sense. Nedda addresses him as Pagliaccio to bring him back into character. Canio is more and more disturbed, his face pale. The audience assumes it is a tour de force performance of magnificent acting, and they cheer him on.

Canio keeps demanding the name of Nedda’s lover, and she keeps refusing to tell him. He stabs her with a knife. She calls out Silvio’s name as she dies, and Canio kills him too. As the audience regards this tableau with horror, we hear, ‘La commedia è finita! (‘The comedy is over!’)

You created this staging in 2015 for Covent Garden as a co-production with La Monnaie / De Munt. What inspired the concept for your staging?

I want to render believable characters and to create an environment within which they can come to life. Immediately it seemed evident to me that these two stories did not reflect opposite worlds, and I wanted to immerse the audience into one contiguous universe. These works both take place in the same region - southern Italy - and are both based on a love triangle. In addition, the presence of religion and the societal roles of women are comparable, and both stories’ intrigues become drama… we can also observe musical similarities between the two operas, both of which are notable for containing a symphonic intermezzo.

And so you strengthened the connection?

Mascagni and Leoncavallo could never have guessed that their operas would become an inseparable diptych. And in fact, it’s a personal choice on my part to present these operas in such a way as if they were one single story, so as to offer a stronger theatrical experience. Cavalleria Rusticana begins, for example, with the arrival of a troupe of actors who will give a performance of Pagliacci - thus, the two stories intermingle.

Where is the power in these seemingly straightforward operas?

The intrigue in Cavalleria is maybe a bit thin, yet it is precisely this simplicity that grants power to operas in this type of verismo, which are anything but conceptual and symbolist. The type of ‘realism’ seen here evokes cinema. For instance, consider the beginning of Pagliacci, where the character of the prologue immediately makes it apparent that this opera is about real, flesh-and-blood people. The story of Pagliacci is more complex because it takes place on two levels. But it applies to an analogous situation to that in Cavalleria, and a violent death likewise provides the denouement. This is another strong resemblance between the two works: the presence of visceral violence.

What does the term verismo mean for you as a director?

As an art form, opera is far removed from reality: telling each other stories through singing is anything but realism! Yet the essence of opera consists of conveying emotion through singing and music. The verismo in music is linked to the literary verismo from authors such as Giovanni Verga, who became well known thanks to his simple tales. For me, verismo deals with stories pulled from real life and from believable human characters, interpreted by singers that enter the story fully while effectively conveying emotion.

Does this also translate into the very elaborate stage design?

Our set contains various “realistic” details, but it was conceived above all to take into account rapid changes - present in both works - between grandiose choral scenes and intimate staging. Our story takes place on the plaza of a small city. Thanks to a rotating stage, we can easily ‘zoom in’ or ‘zoom out’. At the centre, we have the bakery of Mamma Lucia, an older character. I can imagine that she has already lived through parallel situations during her life, also those where violence was involved… it is a place with many associated memories, a very ‘human’ place, where one works with one’s hands. The inside of the bakery may be used, but the outside is equally important, for festivities or the passage of a religious procession… it is important for me that this space helps the intrigue of the opera develop.

You evoke the violence inherent to this story. In general, how do you portray violence on stage?

I don’t have rules for that… I simply try to tell the story honestly. Sometimes we choose to underscore the violence if that is something that fits the concept of the performance. If we consider Pagliacci from a contemporary perspective, Canio should be in prison. He is a monster: he has killed a woman out of jealousy! However, in this case, my ultimate aim was not to show this murder; on the contrary, I want to work on human relationships and the tension which emerges from the parallels between the lives of the actors and the pieces that they are performing: what is precipitated in Canio’s spirit, and how this makes him go mad.

What does it mean for you to reprise this production with two new casts?

For a reprise, many elements are already predetermined, but as I was saying, this repertoire demands that the singers are able to transmit authentic emotions. It is therefore important that the singers and the new musical director have the freedom to bring something personal to the production, something they believe in. I myself try to discover new aspects through the lens of their personalities, their imaginations, their physicality… from there, a creative exchange is possible - and it is exactly this [exchange] that brings me joy in this profession.