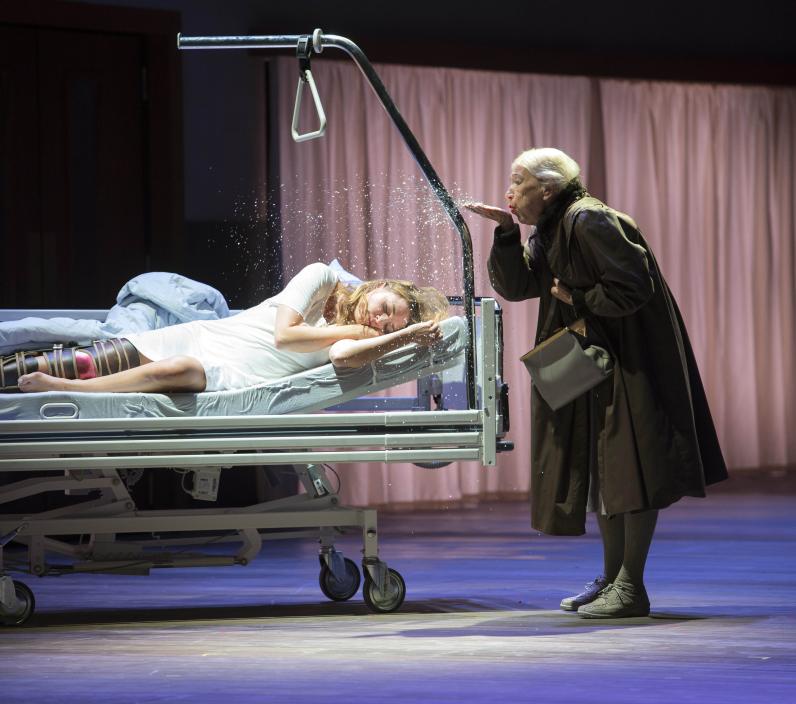 When a budding ballerina falls badly, her dreams are shattered along with her leg. Is there a life for her beyond her fantasy? And will Prince Charming take notice of her even though she may never dance again?

With the Berlin premiere of Cendrillon, the Komische Oper Berlin is lifting Massenet's rarely seen opera out of the cinders. In his surprisingly tragic interpretation, the renowned Italian director Damiano Michieletto plays with the clichés of the ruthless ballet world and crosses the line between fairytale magic and reality.

Behind the scenes of Komische Oper Berlin's Cendrillon

Join us on a visit to the wonderland of Berlin Opera's stage service and discover the talented craftsmen and women who are manufacturing the icy sets and opulent costumes for Komische Oper Berlin's production of Cendrillon.

Pandolfe is suffering under his new wife, Madame de la Haltière. She runs the marriage the way she runs her life: like a tight ship. At the same time, Pandolfe is plagued with guilt over his daughter Lucette. An accident has robbed the girl of her dream for the future. Like Cendrillon – Cinderella – the girl is left to her own devices. Prince Charming is also a prisoner of his own world. His father, a power-mad impresario, expects him to perform and succeed. And he must also finally decide on a partner. Yet the Prince succumbs to melancholy and doesn't want to hear any of it. Meanwhile, Madame de la Haltière hopes to climb the social ladder with her two daughters, Noémie and Dorothée.

Left by herself, Lucette is overcome by fairytale-like sleep: are these ghosts and fairies which appear to her in her dream? To her joy, she is healed and is wearing a beautiful dress. She hurries to the Prince, but the fairy warns her: she must be back by midnight.

The unknown beauty surprises the guests and dances with the smitten prince.

Breathlessly, Lucette awakens – so it was all a dream after all? Her recovery, the dress, the dance with Prince Charming? Pandolfe explains to his incredulous child that it had been muttering confusedly while racked by a fever dream. He protects Lucette against the mockery of his wife and stepdaughters.

Meanwhile, real life takes a fairytale turn: the recent invitation to the dance puts Madame de la Haltière in a fit of ecstasy.

Staring reality in the face

You are debuting with Cendrillon at the Komische Oper Berlin and directing a work by Jules Massenet for the first time - a special moment for you?

In the beginning, I wasn't sure how to deal with the story and the music, but over time I discovered great potential in the plot and in the way it is present in the work. The work leading up to the premiere consisted above all in wondering how to give the characters more depth and how to convey this to the audience. Because the audience needs complexity and the possibility to imbue the characters with feelings.

Are you staging an evening of fairy tales?

It is of course a fairy tale, and these are not part of our reality, but of our fantasies, dreams and also our subconscious. At the same time, I attempt to anchor it in reality and lend reason to the contrast between the painful existence and the dream of more dignity. The story of Cendrillon is shaped in this contrast. In our production, she is a dancer who has injured herself and is in hospital. She is fighting for a way out, for the possibility of being happy again. I decided to stage this story in a ballet setting, which means there are moments when chorus soloists, male and female soloists both sing and dance. We also use motifs from classical ballet and work them into Massenet's opera.

So we see people and not fairy-tale characters?

There is the fairy, but she doesn't take the characters into another world either. She enters the space much more subtly, like a faint wind promising hope. She does not offer an escape from reality, but the possibility of confronting reality. In the end, you are not someone else or better, but you can face reality - without the fear of the situation or yourself. The fairy and the choir of fairies are human in my production: old women who care and try to help. This is the best gift there can be for Cendrillon - contentment with herself and hope for the future. The fairy is the possibility of hope, so to speak. The crucial thing for the telling of the story is that it would work in our version even without fairy-tale elements. Of course, there are ‘magical moments’, but these are not necessary for the dramaturgy of the narrative. If you were to tell the fairy tale itself, you couldn't do without the fairy as a fairy tale character - nothing would work.

‘And they all lived happily ever after’ - is there a place for this classic fairy tale formula in your production?

In the end, Cendrillon and the prince come together here too, but it's not a typical happy ending. Cendrillon doesn't get better, she stays hurt - all her problems don't magically disappear. But she learns to deal with reality, and the prince, conversely, accepts this reality. Through love, he accepts her as she is. That is true love in my understanding. The prince is willing to give up something - for the love of Cendrillon - and throws away the ballet shoes. Knowing that Cendrillon will no longer dance, he chooses her over everyone else, including her father. This makes him truly free in his decision and way of life. You can't have it all, but they both live in the present and for the future - for me, that is the true happy ending.