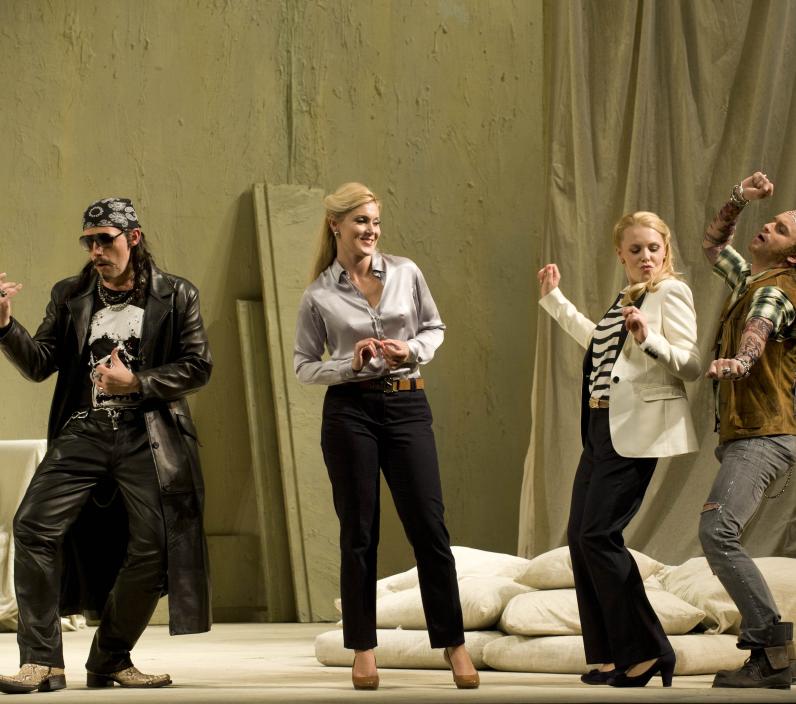 Containing some of the most beautiful arias and attractive ensembles in all opera, Così fan tutte is packed with both pathos and humour. Mozart and Da Ponte's witty, compassionate examination of young love has ensured its lasting popularity.

Jonathan Miller’s original 1995 production for Covent Garden is dear to the hearts of London audiences and has been revived numerous times. Necessity, they say, is the mother of all invention. With no money left for costumes, Miller has the genius idea of asking Giorgio Armani to lend a hand...

According to Alfonso's plan, the two men will pretend that they have been called away to war. While the women are mourning their absence, the men will return in disguise and try their best to seduce each other's fiancées. If they succeed, Alfonso wins the bet.

The sister’s maid Despina suggests that while the men are gone the sisters could enjoy themselves — with other men. Alfonso bribes Despina to help with his scheme. He tells her that two ‘Albanians’ have arrived, eager to meet her mistresses. Despina agrees to introduce them to Dorabella and Fiordiligi. When the fake Albanians make their moves, the two offended women remain firm. The two friends rejoice to see Don Alfonso’s plan fail, but Alfonso advises patience…

Don Alfonso’s ruse is indeed beginning to work. The sisters act scandalized by Despina’s suggestion of harmless flirtation, although they are tempted. Dorabella convinces Fiordiligi that it might be entertaining to take the men for a ride, each unwittingly choosing the other's fiancé. Guglielmo quickly wins over Dorabella.

Though she resists longer than her sister, Fiordiligi ends up giving in to Ferrando. Alfonso suggests the two men might just as well marry the sisters. Just as Despina, dressed as a notary, is drawing up a counterfeit marriage certificate for the newly formed couples, a trumpet announces their real fiancés’ return.

The men reappear without their disguises and pretend shock at what is afoot, before exposing their plot. The women finally realize that they have been deceived. Alfonso tells everyone that it’s for the best: they have shown their true selves and should all laugh at their own expense. The couples forgive each other and are reunited. Nonetheless, the atmosphere is uneasy. Can the mistrust and betrayal on both sides ever really be forgotten?

1° The School for Lovers

Originally entitled La Scuola degli Amanti - The School for Lovers, Così fan tutte entails a lesson in spite of lighthearted, even frivolous subject matter. After all, isn’t Aflonso teaching the young men the supposed truth about women’s fickleness? Couple-swapping plots were by no means a novelty in Vienna, having seen performances of Antonio Salieri’s La Grotta di Trofonio and Shakespeare's A Midsummer Night's Dream among others. Yet the partner exchanges in prior works had occurred with supernatural intervention. Here no such attenuating circumstances can be found and the characters have to answer themselves for their change of heart.

Of the three libretti Lorenzo Da Ponte provided for Mozart, Così fan tutte alone is not adapted from a prior source, no famous play or legendary libertine served as inspiration. Da Ponte had initially offered his libretto to the reputable court composer Antonio Salieri, who turned it down. Mozart, on the other hand, identified the fundamental subject in the seemingly shallow buffoonery. Indeed, Così fan tutte challenges nothing less than the principles of love, virtue and loyalty. According to literary critic Edward Said, ‘Of the three Da Ponte operas, Così fan tutte is most difficult to unlock, precisely because it goes further toward the limits of acceptable, ordinary experiences of love, life, and ideas than either of its two immediate predecessors.’

3° A universe shorn of any redemptive scheme

By the time they collaborated on Così fan tutte, Mozart and Da Ponte were both fundamentally disillusioned with Enlightenment philosophy. The intellectual movement, which had been the guiding light of Mozart’s earlier operas, turned out to be inadequate. Deprived of emotional or moral guidance, the sisters are helpless against the onslaught on their hearts. Although Don Alfonso makes the young couples recite his credo ‘Happy is he who takes the right side of everything, and through all tribulations lets Reason guide him’, it is clear from Mozart’s frenzied music that he for one no longer holds faith in reason. As Said tells us, ‘Mozart never ventured closer to the potentially terrifying view he and Da Ponte seem to have uncovered of a universe shorn of any redemptive or palliative scheme.’

Nicholas Payne, who commissioned the production as the then director of the Royal Opera, remembers the origin of the staging for Covent Garden in 1995: ‘There were two guiding premises: it must be contemporary, as it had been for Mozart and Da Ponte in 1790; and it should take place in the lap of the audience. Jonathan Miller achieved the latter on a tiny budget, but there was no money left for costumes. He had the genius idea of asking Giorgio Armani to provide them, so I despatched him to Milan where he charmed the great couturier into providing them at no cost. The show was a sell-out, so we planned a revival for the following season. But Armani was aghast that it would show ‘last season’s collection’, so insisted on providing a whole new set of costumes for that revival. What we had devised as a short-term solution was so popular with the public, that it was still being revived 15 years later.’ 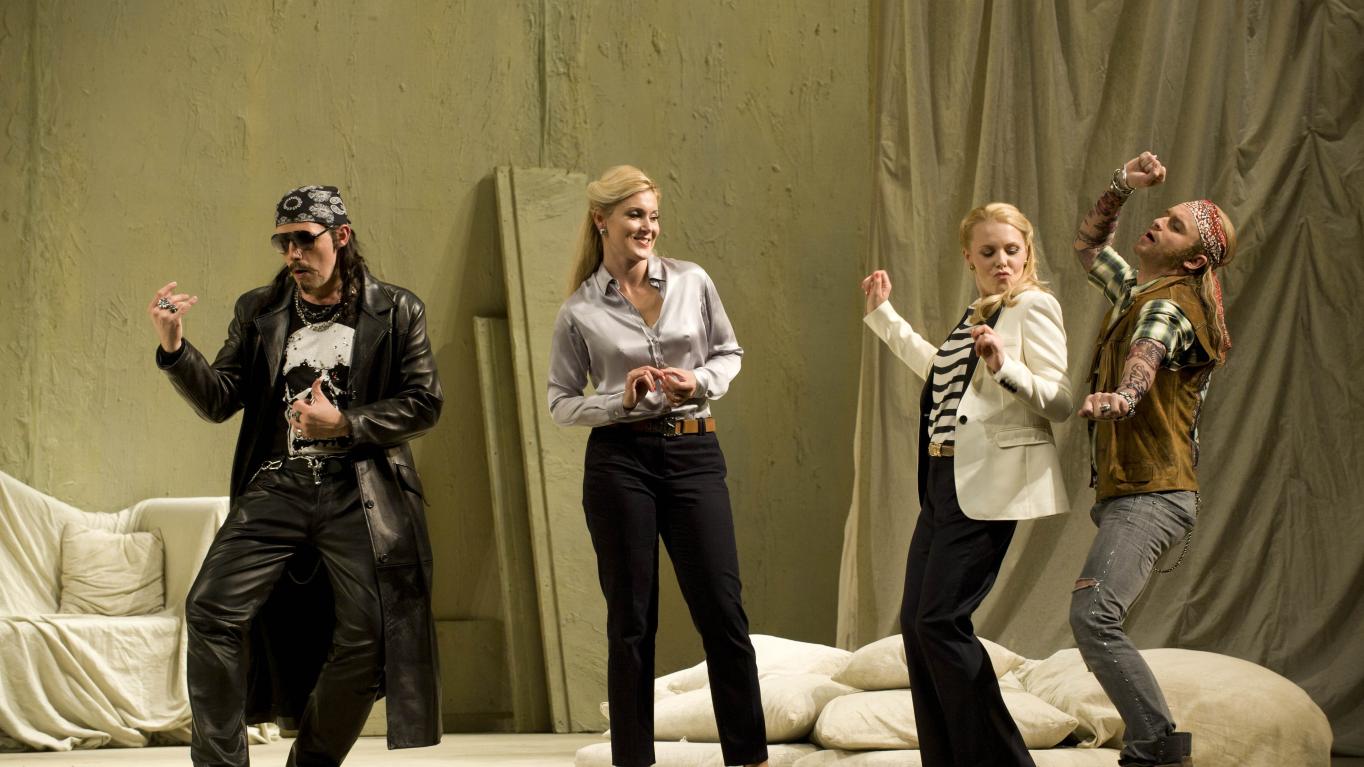 Jonathan Miller did not shy away from adapting his contemporary interpretation of Così fan tutte time and again for its numerous revivals. As one would expect, setting an opera among executives and city girls with its fair share of laptops and iPhones can prematurely age a production. And yet, here the overhaul is not distracting, but rather enables the audience to focus on the opera’s underlying theme. ‘I know what it’s about.’ says stage director Jonathan Miller in an interview. ‘It’s not about fidelity, it’s about identity. It’s about when you dress up, pretend to be someone else and find that you are someone else.’