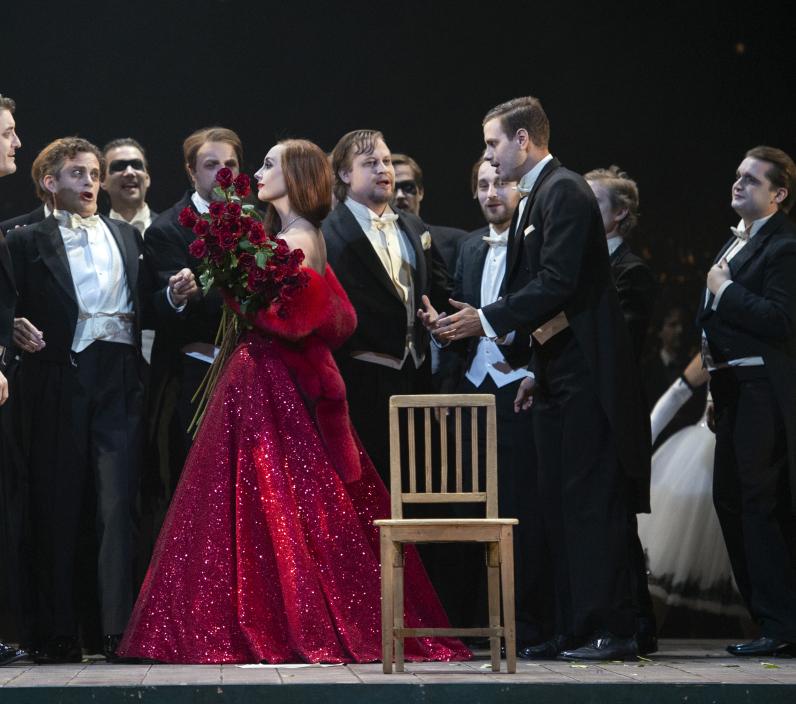 Schreker
This performance is no longer viewable as video-on-demand for rights reasons but other material about the production is still available.

After many years of wandering around the world, an anxious composer chooses love over art. But it may be too late to salvage either.

Franz Schreker was a popular composer in the early decades of the 20th century, until his music was banned by the Nazis because he was of Jewish background. Der ferne Klang, his first major work, is a late Romantic opera of grand passions. Director Christof Loy is back at the Royal Swedish Opera with a production set in a dreamlike mise en scène.

Act I. Fritz (Daniel Johansson), a young, ambitious composer, lives in a small German town. He abandons his true love, Grete Graumann (Agneta Eichenholz), who is from a family of simple means, to devote himself to his music. He sets off in search of a distant sound that he hears within, one he finds hard to put down on paper. Unfettered and free, he hopes to find the mysterious sound that still eludes him. Since he still loves Grete, he promises to return to her as soon as he has established himself as a composer. Conducted by Stefan Blunier and directed by Christof Loy.

Act II. Grete challenges her suitors to a contest, where the prize is a night with her for free. Whoever touches her heart with the most imaginative piece of music, story or song will be the winner. In a gloomy ballad, the count (Ola Eliasson) laments his unquenchable desire for her. Conducted by Stefan Blunier and directed by Christof Loy.

'There is not one measure the same, it is always changing, like a rhapsody,' says Stefan Blunier, the conductor of the Royal Swedish Opera's production of Der ferne Klang by Franz Schreker.

'My first reaction [when I was offered the role] was: it is nice to hear that they want to do something which is special but I need to do a little bit more research to know if it fits me and my voice, because this is not an opera we know about, sadly!' says Agneta Eichenholz, who plays Grete in Schreker's Der ferne Klang at the Royal Swedish Opera.

‘Choosing in art is very much the same as choosing in life‘ says Christof Loy, the director of the Royal Swedish Opera's production of Der ferne Klang by Franz Schreker.

Fritz, a young, ambitious composer, lives in a small German town. He abandons his true love, Grete Graumann, who is from a family of simple means, to devote himself to his music. He sets off in search of a distant sound that he hears within, one he finds hard to put down on paper. Unfettered and free, he hopes to find the mysterious sound that still eludes him. Since he still loves Grete, he promises to return to her as soon as he has established himself as a composer.

Once he has left, Grete’s parents try to marry her off to the landlord of a local inn in the hope of settling debts run up by the drunkard father. Grete runs away from her nightmarish parental home and follows an old woman into the forest at night. The woman promises her joy and happiness with a handsome young man. Grete hopes to see Fritz once again.

Ten years have passed. Deceived by the old woman, who turned out to be a procuress, Grete is now a coveted courtesan at a luxury brothel near Venice. Admiring aristocrats swarm around her, among them a count who wants her for himself and is ready to sweep her away.

Grete, who by now has been with hundreds of men, still longs for Fritz. She challenges her suitors to a contest, where the prize is a night with her for free. Whoever touches her heart with the most imaginative piece of music, story or song will be the winner.

In a gloomy ballad, the count laments his unquenchable desire for her, and a seasoned chevalier sings a chanson about the meaninglessness of marriage. Soon, the divided audience demands that Grete declare the chevalier as the winner.

At that very moment, a stranger appears. It is Fritz, now a well-known composer. He has yet to find the distant sound he has been seeking. Fritz and Grete recognise each other at once and fall into each other’s arms. However, when Fritz realizes that Grete is now a prostitute, he leaves her for the second time. The count claims his prize and takes the distraught Grete away with him.

Fifteen years later, a German opera house is staging an opera that Fritz has finally completed. Grete, who after a brief period with the count was thrown out onto the streets, is back in Germany, now a common streetwalker. She sees the composer’s name on the opera advertising board and goes to see the performance. Strongly moved by the tale, which is basically her own life story, Grete leaves the theatre before the performance ends. As the audience streams out of the opera, she hears that the work is deemed a failure, and that it will hardly outlive its dying creator. Doctor Vigelius, who was involved in the plans to marry off Grete all those years ago to the landlord, and who feels like an accessory to her wretchedness, recognizes her and promises to bring her to Fritz.

The morning after the failed premiere, Fritz receives a visit from his friend, Rudolf, who has come to cheer him up. He believes that Fritz should be able to rewrite the final act, thereby completing his masterpiece. Feeling that death is near, however, Fritz only wants to see the woman he caught a glimpse of in the audience at the performance the night before, and who left the opera early.

Suddenly, Fritz once again hears the sound within him that had been eluding him for so long. Doctor Vigelius brings Grete to him. The pair promise never to part again, but Fritz’s journey through life has come to an end. He realizes that he could only hear the sound in the company of Grete and dies in her arms.

Love, fate and obsession all play their part in Franz Schreker’s Der ferne Klang. Christof Loy explains why he finds the opera so fascinating and what he learnt while directing this new production at the Royal Swedish Opera.

Over the past year, I have directed three operas about artists themselves: Richard Wagner’s Tannhäuser, Richard Strauss’s Capriccio and now Franz Schreker’s Der ferne Klang. These have all furthered my understanding of the creative process. It is easy to say that these operas are only about composers and their problems, but creating a work of art is a symbol for creating one’s own life. It is about the choices we make. It is a constant struggle to make the right decisions, and sometimes we make the wrong decisions, both in life and in art.

Fate is a strong ingredient in Schreker’s world. Most people associate the word ‘fate’ with something evil, like being born under an unlucky star. While in Grete’s case it is about her family situation, for Fritz it is a creative crisis in his professional life that leads to his self-destruction. The fairy-tale aspect of the opera transforms the forces of evil into roles. The old lady who cheats Grete in Act I, and Dr. Vigelius, who is almost like a Mephistopheles, are the most overtly evil characters. But even one that seems ordinary, like Rudolf, drives Fritz to the abyss.

It is interesting that we talk about fate as something evil and never look at it as something positive. It is undeniably an important theme in the opera, but Grete and Fritz must also fight hard to understand what the love they have for each other is all about. In the end, everything positive is related to the personal choices they make. I always feel that Act III leads to a kind of catharsis, primarily for Fritz and Grete but also for the audience.

When Fritz finally realises that finding ‘the distant sound’ will not bring him the success he had longed for, he gets a shock. But this shock sets him free to find inspiration from elsewhere. When he tells Grete in Act I that he has to go out into the world to find the sound, his impulse is right. The problem is that he travels to find inspiration in a superficial way. He is too close-minded. We can all recognise ourselves in him, we all look for inspiration in a superficial way and fail to find it. Then when we give up, we find what we were looking for all along. For Fritz, this failure is part of his process of healing.

Grete, meanwhile, longs to be loved by Fritz, but when he is gone, the longing remains. Like Violetta in Giuseppe Verdi’s La traviata, Grete makes an unfortunate choice when she follows the old lady, who turns out to be procuress and turns her into a courtesan. Grete’s catharsis moment also comes in Act III, when she sees herself depicted on stage in Fritz’s opera. When it’s over, Dr. Vigelius asks her, ‘Aren’t you Gretel? Gretel Graumann?’ And then she can say ‘Yes, that’s who I want to be.’ It’s a touching moment.

Schreker gave a musical voice to all these characters. With every beat, you sense their obsessions. There is not a single superfluous note in the score, because everything has its dramatic purpose. That is what we can say about all the great composers: they allow us to explore the human condition because they have found a musical language to communicate the hard choices that individuals have to make.

This text is based on an interview that Christof Loy gave to Katarina Aronsson, Dramaturg and Programme Manager at the Royal Swedish Opera, which first appeared in the programme book for Der ferne Klang in October 2019.