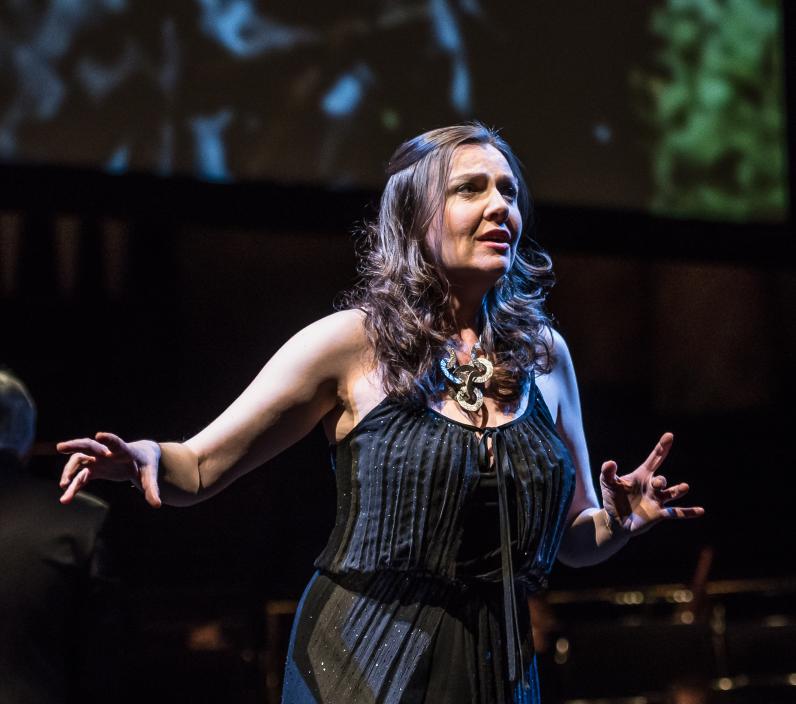 After Sieglinde (Lee Bisset) offers him escape from her husband Hunding as well as a sword which is stuck in a tree outside, Siegmund (Michael Weinius) compares his love for Sieglinde to the beauty of springtime. Sieglinde reciprocates his love, even though he is her twin brother.

Wotan soon became restless in fortress Valhalla.  He sought wisdom from the earth-mother Erda, and she bore him nine daughters, the warrior Valkyries.  He also disguised himself as Wälse and fathered twins, Siegmund and Sieglinde.  After he abandoned them, they became separated, and Sieglinde was taken as wife by Hunding, descendant of the giant race on earth.

Siegmund is on the run from his enemies.  He staggers exhausted into Hunding’s house, where Sieglinde offers him refreshment and sympathy.  When Hunding returns home, he questions the weaponless stranger and discovers that they have been fighting on opposite sides in a bloody conflict of clans.  He will offer his opponent refuge for the night, but in the morning will kill him.

Siegmund is cornered, but the light of the fire reveals the hilt of a sword buried in the tree which grows in Hunding’s house.  He calls on his absent father to save him (‘Ein Schwert verhiess mir der Vater’).

Sieglinde returns to tell him that she has drugged her husband, so that Siegmund may escape.  She explains how a mysterious stranger plunged the sword into the tree at her wedding (‘Der Männer Sippe’).  The door flies open to reveal the dawn.  Siegmund believes that the spring brings fresh hope (‘Winterstürme wichen dem Wonnemond’).  Sieglinde replies that he is the spring (‘Du bist der Lenz’).  They explore their affinities and growing attraction, until they realise that they are brother and sister.  Siegmund pulls the sword from the tree, and they run out into the forest to consummate their love.

Wotan joyfully greets his favourite daughter, the Valkyrie Brünnhilde.  She warns him that his wife Fricka is on the warpath.  She has uncovered his earthly wanderings and is outraged by the incestuous union of Siegmund and Sieglinde.  Despite Wotan’s argument that his plan is designed to protect their future by creating an independent agent, Fricka insists that he should protect the sanctity of marriage by siding with Hunding in the ensuing fight.

Wotan is dejected by the thwarting of his scheme, and confides in Brünnhilde as if speaking to his inner self (‘Als junge Liebe’).  He acknowledges that his power was won by trickery and that his elaborate strategy to protect it will fail.  He foresees his power will be usurped by Alberich’s as yet unborn son and wills his own end.  (Die Walküre is the only part of the Ring in which its protagonist Alberich does not appear, but his baleful presence is there in the music).  Brünnhilde senses but cannot understand her father’s pessimism.

Sieglinde can run no further and begs Siegmund to leave her to continue his escape.  But he will not abandon his now sleeping sister.

Brünnhilde appears to him, as if in a dream, to warn him of his impending death (‘Siegmund, sieh auf mich’).  Her task is to lead him to an afterlife among the fallen heroes in Valhalla.  Siegmund refuses the offer.  He will stay with Sieglinde and fight to the death.  Hunding’s horn calls him to battle.  Sieglinde awakes from her nightmare to find herself alone.  She witnesses Siegmund first being protected by Brünnhilde, and then disarmed by Wotan who breaks his hard-won sword into pieces.  Hunding kills Siegmund.

Eight Valkyries ride through the skies carrying fallen warriors on their horses.  When Brünnhilde joins them, they are astonished that she brings not a hero but a woman.  Sieglinde wants only to die, but Brünnhilde tells her that she is pregnant, and that her son Siegfried will save the world.  Sieglinde has a revelation (‘O hehrstes Wunder’ sung to a motif which only recurs at the end of Götterdämmerung, the final episode of the Ring); and escapes towards the dark forest to the east where Fafner guards his golden hoard.

Brünnhilde remains to face the storm and fury of Wotan.  He condemns her disobedience for flouting his will, which obliges him to banish her from his service forever.  She tries to justify her action as being conceived in his interest (‘War es so schmählich’), and he relents enough to soften her punishment.  He will put her to sleep on the remote mountain-top, but she will be protected by a ring of fire which only a fearless hero will dare penetrate.  He bids farewell to his beloved daughter (‘Leb’ wohl, du kühnes, herrliches Kind’) and summons the flames.

He had begun the composition of the opera Siegfried’s Tod in 1848, but had slowly realised that in order to tell the fall of the hero, he needed to explain Siegfried’s youth: the mystery surrounding his conception, how the Valkyrie Brünnhilde had been punished for saving his parents against the wishes of the god Wotan, and finally how the ring had been created and caused the old world to collapse.

First called Siegmund und Sieglind: der Walküre Bestrafung (Siegmund and Sieglinde: The Punishment of the Valkyrie), the opera Die Walküre is the second part or Wagner’s Ring cycle and relates the fate of Siegfried’s parents. However, the opera comes third in order of composition since the first sketches for the libretto date from November 1851, when Wagner was also working on Das Rheingold, while composition started in the summer of 1852.

In this opera, Wagner puts his experience expanded orchestration, leitmotivs and word-setting into practice.

In the first act, that stands out by the physical absence of Wotan though he plays a major part in the drama, the god’s presence is implied as early as the prelude through the reference to the leitmotiv of the spear, symbol of his authority and power. On the other side, the famous “Ride of the Valkyrie” illustrates a characteristic orchestral device of Wagner’s: a musical theme played by the brasses, piercing through a dense texture of woodwinds and strings.

Die Walküre is the best incarnation of the theoretical principles of Oper und Drama, a synthesis of poetry and music without noticeable sacrifice to musical expression. Numerous of the most powerful passages achieve their effect through this peculiar relation between text and music. Die Walküre is often considered the most accessible of the Ring operas.