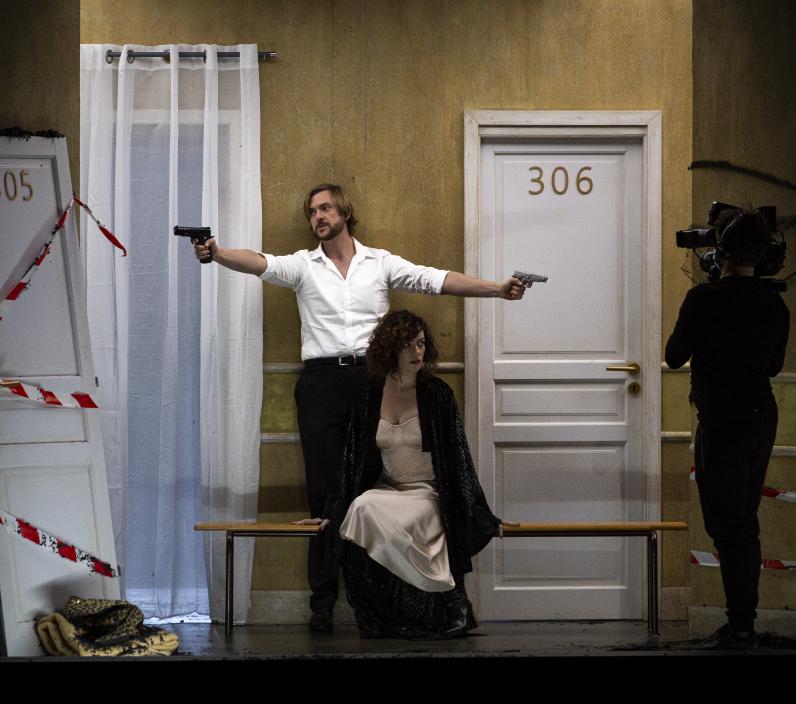 Rossi
This performance is no longer viewable as video-on-demand for rights reasons but other material about the production is still available. 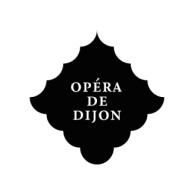 To save his protegé from a fatal destiny, a magician has imprisoned knights and ladies in an enchanted labyrinthine palace and mystifies them to the point of delirium.

Luigi Rossi's first opera - boasting sixteen soloists, double and triple choirs for 6 and 12 voices, numerous ballets  - marked the last surge of Roman opera before the Eternal City forsook it for a long time. For the Argentine conductor Leonardo García Alarcón, who rediscovered the opera in the Vatican Library neglected for 380 years, Il palazzo incantato is ‘the missing link in the history of opera and the metaphor of our lives'.
‘Leonardo Garcia Alarcon was known as a magician, now he has become a conjurer.’ (Le Monde)

“Who can hope to escape” the Enchanted Palace? At the end of the first act, the sorcerer Atlante has trapped all the characters inside. Singers, dancers and musicians wander through the labyrinth whose doors open and close to the rhythm of Luigi Rossi's baroque music.

Il Palazzo incantato has not been performed since its premiere in 1642. Music director Leonardo García Alarcón and stage director Fabrice Murgia are breathing new life into a little-known work never before performed at the Dijon Opera.

‘Working with the conductor Leonardo García Alarcón, we felt like we were moving in this maze too, deciphering, wondering about what actually meant the characters. We had to find a way out.'
4 minutes with Fabrice Murgia, director of Rossi’s The Enchanted Palace at Opéra de Dijon.

Painting, Poetry and Music compete for their merits. Painting is slow to finish the sets for the upcoming opera. Magic arrives, raising them in the blink of an eye and choosing the subject of the opera: Roger imprisoned in the palace of Atlante, then delivered by the warrior lover Bradamante, an illustration of the theme: LOYALTY AND VALOUR.

The magician Atlante, protector of Knight Roger, has devised a ploy to prevent the latter from meeting the cruel fate that awaits him if he marries his beloved Bradamante: to hold him in a magical, labyrinthine castle imprisoning and dumbfounding all those who pass within its reach.

At first, Roland arrives in pursuit of his beautiful - but true or false? - Angelique. Atlante transformed into a giant kidnaps her in front of his eyes. Bradamante and her trusty Marphise, the warrior impervious to love, followed by the knights Ferragus and Sacripant, in pursuit of Angelique, with whom they are in love, are in turn drawn into the castle.

Roger, who shortly beforehand saved the real Angelique from the evil Orc, is in the midst of a heated discussion - of lovers? - with her about a mysterious magic ring once given to Roger by Bradamante but actually belonging to Angelique. Bradamante surprises the scene and immediately suspects that Roger is cheating on her, giving hi, the cold shoulder. After Angélique's departure, he fruitlessly tries to justify himself. The break-up seems to be final, to Roger's great despair.

While the two of them wander incessantly in the palace-labyrinth, Mandricardo, in search of Doralice, and Gradasso are drawn there in their turn, while Atlant attracts the young Olympia. They all wander endlessly, Atlante employing various appearances in various forms to sow even greater confusion.

Roger and Bradamante are wandering on their own, one in the grip of romantic despair, the other of jealousy and anger. When they finally find each other, they only flee from each other again.

Meanwhile, Angelique is looking for a knight who can escort her to her father's house. She first approaches Sacripant with her request. Ferragus then appears, who challenges Sacripant the honour to escort Angelique, with whom he too is in love. A fight is brewing when another admirer of the Princess appears: Roland, who in turn joins in the quarrel. Angelique tries to stop them and offers the three of them to accompany her. Roland, unlike the other two, is ready to accept. However, she gets them to lay down their arms: whoever manages to capture her will serve as her escort. But thanks to the magic ring, she suddenly disappears in front of their eyes, letting them hear but not see her.

Weary of wandering, Roger falls asleep. Bradamante finds him like this. She is tempted to take advantage of the situation to attack and kill him. She changes her mind at first, but when her anger takes over, she gives in to her fury and raises her sword against him. Roger wakes up at this moment and begs her to finish her act, his life being worthless without her. Another argument ensues about Roger's constancy and loyalty. They run away from each other again.

Angelique gives up hope to be able to separate the three knights fighting over her and tries to leave the palace. Atlante encourages her to postpone her departure: she will benefit from meeting a beautiful lover. In order to finally convince her, he conjures up the image of the lover in front of her eyes. She immediately falls in love with him. A dwarf then warns his master Atlante that two young girls are trying to flee the palace and asks him for permission to bring Bradamante a letter that Roger has entrusted to him. Atlante accepts out of pity for Roger's pain. Then he intervenes in front of the girls and authorises them to leave the premises on the sole condition that they renounce love. They then ask for a time of reflection…

As a new knight, Astolphe, approaches the palace, desperately Bradamante tries to leave it. The dwarf brings her Roger's message. She tears it to pieces, but at the dwarf's insistence, finally resolves to read it. She can only read bits and pieces in which Roger explains the gift of the ring to Angelique as a duty to save her from death. She is reassured, but when she sees Angelique coming, she decides to hide and listen to her.

Still overwhelmed by the vision of her future lover, Angelique admits to being overcome by love. Bradamante is convinced that she is talking about Roger. She reveals herself and makes her believe that she no longer loves Roger in order to gauge his feelings. Angelique manages to persuade her that her love is not for Roger and confirms the circumstances that led to the gift of the ring.

Worried about the arrival of Astolphe, the wisest of the knights, in his palace, Atlante elaborates a strategy: each prisoner will see someone else in him.
Astolphe enters the garden and meets all its occupants in turn, each one taking him for another. In the end, he has no other solution than to blow his magic horn: they all flee in terror.

Roger and Bradamante make up after Angelique's confession and try to leave the palace.

Atlante then plays his last card: transformed into Roger, he sows confusion between the two lovers. The real Roger challenges him to a duel in order to prove his identity. Atlante is defeated and appears in his true form. To Roger, he reveals who he is and why he has acted this way. He tries in vain to convince them to stay in the palace and begs for their mercy. He gives them the secret to destroy his enchantments: by extinguishing the fire that burns in an urn in the middle of the garden. He offers to accompany them in this task, while he reveals their future to them. They set out to do this while the other occupants try to escape from this place 'which is not closed but keeps changing its appearance.'

5 things to know about The Enchanted Palace

1° Who was Luigi Rossi?
The composer Luigi Rossi was born around 1597 in the Puglia region of southern Italy. In 1621, he entered the service of the Borghese family in Rome, where he remained for 20 years until he took up a post as a musician with Cardinal Antonio Barberini.
In 1646, he entered the court of the regent Anne of Austria, at the request of Cardinal Mazarin, who sought to introduce the lyric genre to the French court. In 1647, Rossi premiered his second opera, Orfeo, in Paris. The opera was such a success that it was revived no less than five times in one year.
Rossi is to Rome what Cavalli is to Venice. As the conductor Leonardo García Alarcón says, ‘Considered the greatest composers of their time, […] each represents in a way the two lyric styles of the peninsula, that of the north with Cavalli and that of the south with Rossi.’
Today, Luigi Rossi is revered for his Orfeo and his cantatas (of which he composed more than 300), but his first opera, Il palazzo incantato, remains unknown.

2° The last opera performed in the Eternal City
The Enchanted Palace was a commission from Cardinal Antonio Barberini. In those days, the great aristocratic families of papal Rome vied to show off their splendour and their attachment to the arts. To display their wealth and power, they called upon the top composers and the best librettists.
Performed on 23 February 1642, Rossi’s The Enchanted Palace would be the last work of this genre to be presented in Rome. On 29 July 1644, Pope Urban VIII died, and with him passed the reign of the family that had fashioned the Eternal City. He was succeeded by a member of the Barberini’s rival family, Giovanni Battista Pamphili known as Innocent X:  pious Spain is now hovering over Rome and opera of this type fell out of favour …

3° A Roman feast
In Venice, opera was typically performed by a small orchestra. In Rome, on the other hand, the compositions of the period were resounding celebrations. The Enchanted Palace perfectly illustrates this sense of splendour: we find music, song, dance, theatre, impressive sets, costumes and stage effects, massive choirs and the use of a sizable orchestra (some 40 musicians)… The premiere performance listed 27 characters, and lasted seven hours! Everything contributes to making The Enchanted Palace a total work of art.

4° From librettist to pope
The libretto of The Enchanted Palace was written by Rospigliosi, who would later become Pope Clement IX. He adapted Ariosto’s Orlando furioso, a chivalric epic considered to be a masterpiece of Italian literature. Rospigliosi provided a dramma per musica in three acts of 2,725 verses, derived from a secular subject, a rarity in Rome at the time.

Discover the story in 30 seconds: 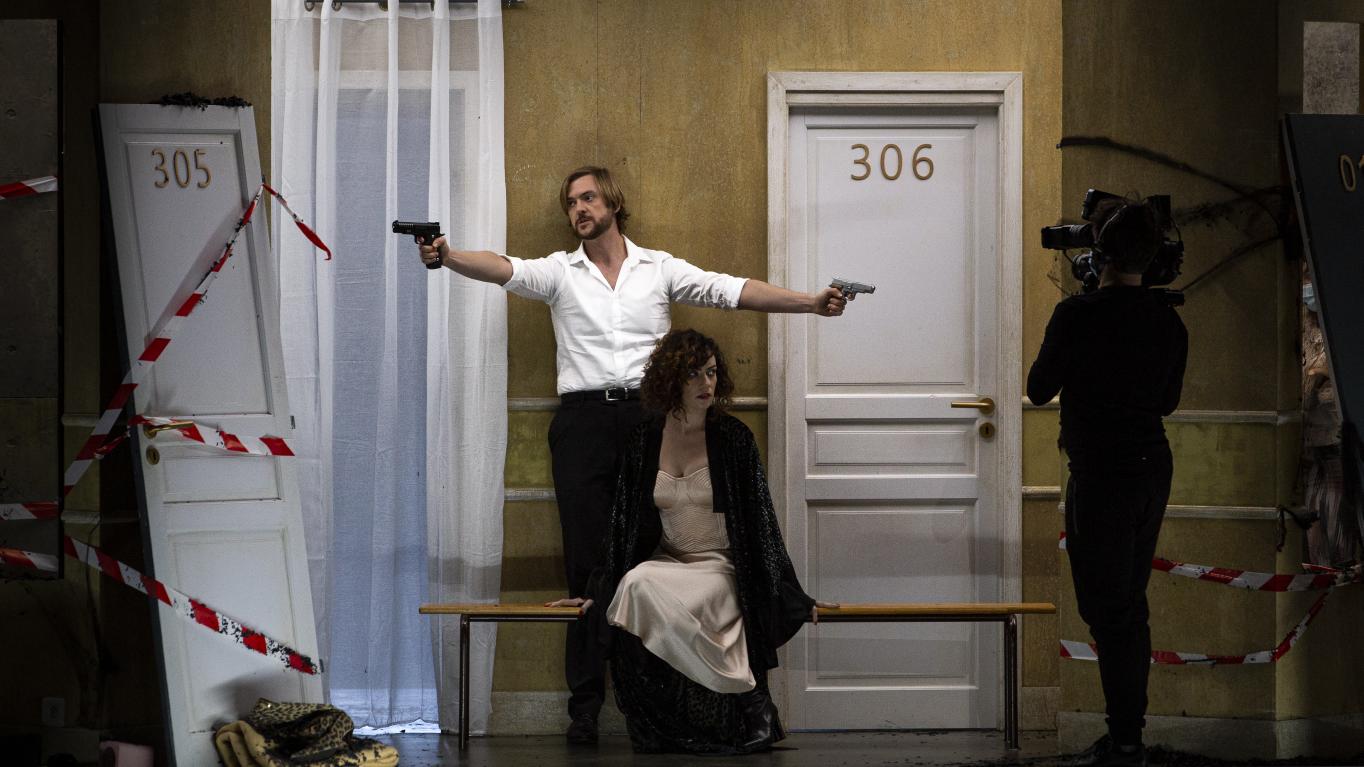 5° A confined creation
Luigi Rossi’s The Enchanted Palace has not been performed since it first premiered in 1642. At the Opéra de Dijon, Leonardo García Alarcón and Fabrice Murgia are restoring a little known and unique work to life in a very unusual context. In spite of the confinement, opera houses still have the opportunity to rehearse, and the artists thus can continue their creative work.
In light of this context, musical director Leonardo García Alarcón draws attention to the fact that the production of The Enchanted Palace has become a metaphor of sorts for the situation outside.
‘We are here, at the opera, working in confinement as we rehearse scenes that place the characters in confinement in a palace that, in its own way, establishes a certain social distancing that separates them, and prevents them from finding each other, loving each other, embracing each other. I believe this reflection of our external situation, within the intimacy of the stage, is really starting to influence our interpretation.’