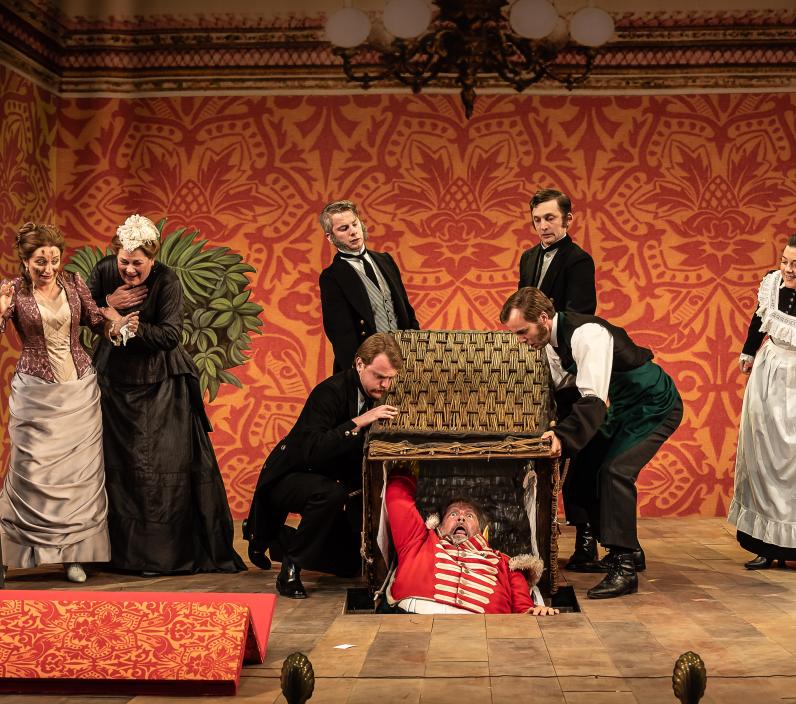 The lecherous Falstaff, with his infamous roving eye, finally meets his match when his underhand plans to solve money troubles have the three merry wives of Windsor conspiring to teach him a lesson.

Ford returns home, determined to surprise Falstaff with his unfaithful wife. In the ensuing chaos, Falstaff and the dirty laundry basket are tipped into the River Thames and the only lovers to be discovered are Nannetta and Fenton. Ford is forced to admit that he was wrong to suspect Alice.

Doctor Caius has come to complain to Sir John Falstaff that Bardolfo and Pistola, Falstaff's unruly companions, have made him drunk and robbed him. They laugh at him until he leaves the inn in a fury. The landlord presents a bill and it becomes clear that Falstaff is chronically short of funds. He reveals a masterplan to remedy the situation by seducing two women, Alice Ford and Meg Page, the wives of wealthy Windsor gentlemen. When Bardolfo and Pistola refuse to be part of his plans, Falstaff is outraged by their trumped-up excuses and throws them out.

Alice and Meg discover that they have received identical love letters from Falstaff and decide to teach him a lesson. Mistress Quickly agrees to help them by luring him to a rendezvous. In the meantime, Bardolfo and Pistola have told Ford of Falstaff's plans, in the hope of financial recompense. Ford decides to test his wife's virtue by visiting Falstaff in disguise and pretending to ask his assistance in seducing her. His daughter, Nannetta, and her lover, Fenton, snatch illicit kisses whenever they find the opportunity.

Bardolfo and Pistola beg to be allowed to return to Falstaff's service. Mistress Quickly comes to give Falstaff replies from both Meg and Alice, inviting him to visit Alice later that day. Matters appear to be proceeding even more satisfactorily when Falstaff is offered cash by a stranger calling himself Brook (he is in fact Ford in disguise) to soften up Alice for him by seducing her. Falstaff agrees with alacrity and, while he prepares for amorous conquest, Ford rages against his wife and her suspected infidelity.

Nannetta bewails the fact that her father is trying to marry her off to Doctor Caius. Alice reassures her and, with Meg and Mistress Quickly, makes preparations to receive Falstaff. They plan to pretend that her husband has returned home unexpectedly and force him to hide in a laundry basket. All goes according to plan until Quickly announces that Ford is really on his way home, determined to surprise Falstaff with his unfaithful wife. In the ensuing chaos, Falstaff and the dirty laundry are tipped into the River Thames and the only lovers to be discovered are Nannetta and Fenton. Ford is forced to admit that he was wrong to suspect Alice.

Falstaff rails against the injustice of his treatment and Mistress Quickly has some difficulty in persuading him to succumb to a second invitation from Alice. Eventually he agrees to meet her that night in Windsor Forest where, according to local legend, witches gather and the ghost of Herne the Huntsman is sometimes seen. Quickly advises him to scare off anyone who might see him by adopting the guise of Herne the Huntsman, wearing stag's antlers on his head. Falstaff is unaware that everyone in Windsor is planning to trick him and that they all intend to be in the Forest that night, wearing various disguises. Ford revels in the prospect of getting his own back on Falstaff and is also determined to force his daughter to marry Doctor Caius. Mistress Quickly overhears him and works out a way of tricking him as well, by dressing someone else in Nannetta's costume as Queen of the Fairies.

As midnight approaches, people begin to gather in the Forest. Falstaff appears and makes strenuous efforts to seduce Alice. As supernatural noises are heard in the distance she runs away, leaving Falstaff to be tormented by disguised townspeople. It is only when he recognises Bardolfo's flaming red nose that the trick is uncovered. Ford mocks Falstaff and then gives his blessing to the union of two couples, assuming one pair to be Caius and Nannetta. When they take off their disguises he finds that he has approved Nannetta's marriage to Fenton and that Doctor Caius has been joined to Bardolfo. The women delight in their triumph over the men's suspicions and vanities and Falstaff leads everyone in a final burst of laughter.

5 things to know about Falstaff

‘He's a drunk, a liar, and a cheat,’ says the theatre critic Paul Taylor. ‘Yet he's been glowingly described as "the personification of England".’ The fat knight Sir John Falstaff appears in three of Shakespeare’s plays: Henry IV, Part 1 and Part 2, where his habit for binge-drinking with lowlifes at the Boar’s Head Inn makes him the perfect companion for the wayward Prince Hal; and The Merry Wives of Windsor, where, having fallen on hard times, he tries to court two wealthy married women - by sending them identical love letters. With antics that are at once both disgusting and endearing, Falstaff became an instant hit; Elizabethan audiences flocked to see their favourite character, who still managed to draw in the crowds even after Shakespeare’s death, when the Bard’s other plays became poorly attended.

2° The devil will not have me damned

By his late seventies, Verdi had composed 27 operas, including two based on Shakespearean tragedies, Macbeth and Otello. Writing to his librettist, Arrigo Boito, the Italian maestro worried about ‘the large number of years’ in his age. He had to consider the very real possibility that any new venture between them might be left unfinished. Nevertheless, while his health was still good, Verdi was content to try and write one more work for the stage. For decades, he had wanted to adapt King Lear into an opera, but in his old age he recognised that as simply too big a challenge. He decided instead to write his first comic opera in fifty years. This unexpected twist at the end of Verdi’s career was encouraged by Boito, who declared: ‘After expressing all the griefs and lamentations of the human heart, to finish with a mighty burst of laughter - that will astonish the world!'

3° The spirit of Shakespeare

Verdi turned to Falstaff. From Salieri to Gordon Getty, the boastful, boisterous and obese buffoon has been - and continues to be - a magnet for ambitious composers wanting to share in his creative afterlife. But among the dozens of admirable musical adaptations, by far the most celebrated is Verdi’s Falstaff, his last and arguably greatest opera. Bursting with wit and beautiful melodies, this supreme example of Italian 19th century comic opera captures the spirit of Shakespearean comedy better than anyone since the Bard himself. After a lifetime of writing bloody and passionate tragedies, it was Verdi who had the last laugh.

For acclaimed bass-baritone Henry Waddington, it has been a joy to make his role debut as Falstaff: ‘Throughout my career, I have been privileged to play many comedic roles but I cannot tell you how thrilled I am to have been asked to play Sir John in this new production of Verdi’s comic opera. Falstaff is well known as one of Shakespeare’s great comic characters and Verdi brings him to life in his spectacular score.’ Waddington says that it is a challenging role both vocally and dramatically but that that is what makes it one of the most coveted roles in the bass-baritone repertoire. ‘I can’t wait!’

5° A girl who knows what she wants

Soprano Soraya Mafi makes her Garsington debut as Nannetta, the daughter of Ford and Alice. ‘Nannetta has always been the role that my teachers and mentors have recommended I study,’ says Mafi. ‘As a young, light-lyric voice, there isn't much other Verdi accessible to me, so it's a privilege to sing music by my absolute favourite composer at this early stage in my career. As a character, I love that Nannetta is a girl who knows what she wants. I can relate to that!’