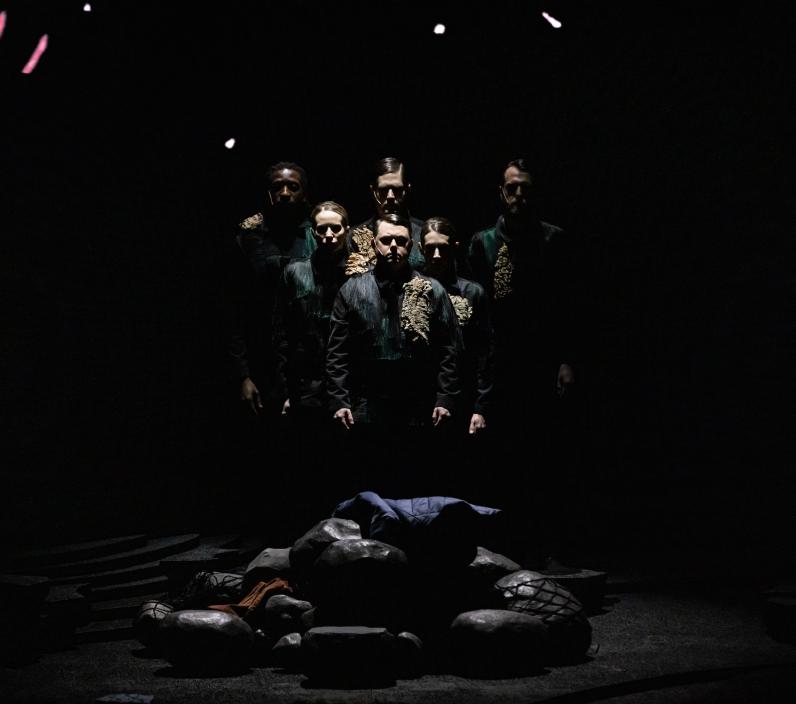 Trapped in an unhappy marriage, a woman mourns the devastation of the forest around her. An unexpected affair instigates an explosive metamorphosis, and she finds perfect release as a tree. But the world is a dangerous place for trees, and deep in the forest a forester and a student lay claim to a body of wood and leaf - one for money and one for love.

A subversion of Ovid’s Metamorphoses, Like flesh is the fruit of a collaboration between a group of committed young artists. The Israeli composer Sivan Eldar creates an intriguing  sound world by combining orchestral and electro-acoustic music. The British playwright Cordelia Lynn is already well known in English theatre circles for, among other things, her collaboration with Katie Mitchell to re-stage The Tempest. With the Italian director and scenographer Silvia Costa, they offer a work that transcends natural and touches the supernatural. Driven by the fiery energy of the Le Balcon ensemble, this is a sensual, political, ecological opera as urgent as the climate crisis itself.

Like flesh won the 202I FEDORA Prize for Opera, which is supported by Generali.

A contemporary masterpiece about our relationship with each other and the environment.

In Like flesh, electronic and acoustic music combine. No stranger to new music, which performs regularly with his ensemble Le Balcon, conductor Maxime Pascal introduces this mixed music of Eldar's new opera.

A metamorphosis on stage

How to represent a metamorphosis on stage? This transformation, at the heart of the opera Like flesh, is the central challenge for set designer and director Silvia Costa in staging the premiere of the new opera by Sivan Eldar and Cordelia Lynn at the Lille Opera.

In Like flesh, Sivian Eldar's choice to combine electronics, acoustic music and amplified instruments at the same time grew out of her research at Ircam (Institut de Recherche et of Acoustic/Music Coordination) in Paris, as well as her desire to create a sound universe different from that which can be created just with acoustic instruments.

The action takes place in a forest, and in a house in the forest.

Scene 1. What the Forest Knew
The Forest exposes its immemorial knowledge of nature and the history of the world. Life is spreading everywhere, tree roots are singing.

Scene 2. The Birds Don’t Come Here Anymore
The Forester administers the Forest according to the rules of the capitalistic world; the Woman  la sad because nature is slowly destroyed by men. The Student who lives with them describes how animals are slaughtered; the Forester and his wife are deeply moved by her curiosity and passion.

Scene 3. What the Trees Did
The Forest tells the role of trees in a habitable earth, how nature is being gradually destroyed, and it prophesies a world from which trees will have vanished.

Scene 4. The Colour Red
The Student explains why she is fascinated by trees, the Woman listens with interest. Their dialogue turns into a love duet.

Scene 5. Lessons Learnt of Kindness
The Woman asks the Forester if trees suffer when he cuts them. The man sees his wife going into the forest with the Student; he does not want to know more.

Scene 6. What the Human Did
The Forest tells an anecdote: the day when a woodman came with an axe, the trees exclaimed: “Look! the handle is one of us!”

Scene 7. The Third Dream
The Woman and the Student kiss. The Woman turns into a Tree.

Scene 8. What the Human Did Next
The Forest recites the lists of all the uses to which humans have put plants.

Scene 9. So. Your Wife Has Turned into a Tree
The Student tells the Forest about the miracle which has just happened. She accuses the man of being nothing but a killer. The boundaries between the Forest and the humans start to disintegrate.

Scene 10. Regret
The Forester asks his Wife what she feels now that she has become a Tree.

Scene 11. What the Forest Saw
The Forest keeps the memory of bloodshed and crimes committed by mankind.

Scene 12. A Tree Remembers
A dialogue between the Tree and the Student, in the Forest which man has been emptied of its inhabitants. The Forest mourns the absence of his transformed wife; the Student discovers how difficult it is to communicate with the Woman now she is a Tree and lives in a different time scale.

Scene 13. Entanglement
The Woman turned into a Tree is now completely entangled in the Forest. They share nutrition, and pain. The Tree says that the student has hurt her by carving hearts into her trunk, but also tended to her. The Forest explains the eternal cycle of decomposition and recycling of organic matter.

Scene 14. Wood Behaviour
The Student tells the Forester how sad she is that her own human life cannot have the same rhythm as the Tree’s; the Forester praises fire and human civilisation.

Scene 15. Winter, Again
The Student aspires to merge with the Tree. The Forester harvests, cuts and prunes, but the branches will always grow back.
The Forest's final monologue: after the devastation caused by global warming and environmental destruction, life will return, nature will reclaim the world.

The birth of an opera

Like flesh is your first work intended for the opera stage, but you have already written several staged pieces for the voice. Where did the idea come from?
Sivan Eldar: Several experiences inspired me to write for the theatre, in particular in 2014 working with vocalising dancers, then I composed The White Princess after Rilke, for two voices, percussion and electronics, which premiered in 2016 as part of the Académie du Festival d’Aix-en-Provence in collaboration with the playwright Cordelia Lynn. In August 2018, my piece Heave (Uprising) for six voices and electronics was premiered at the Royaumont Foundation and in 2019, Una Mujer Derramada (A woman reversed) for soloist and orchestra. These works provided me with precious musical material which naturally led me to writing Like flesh.

For this opera, you have again worked with Cordelia Lynn. The story imagined by her as librettist evokes mythology, and in particular one of the stories of Ovid's Metamorphoses. Pursued by Apollo, a lover from whom she flees, Daphne asks her father, the river Peneus, to help her escape her tormentor. She then gradually turns into a laurel tree.
SE: It is also the imagined destiny of a woman who leads a loveless married life with a forester, her husband. The sudden emergence of a desire for a young student disrupts the couple and causes her to change shape, she metamorphoses. By becoming a tree in the forest, she hopes to escape from her unhappy existence.

Has this evocation of transformation inspired you?
SE: Most certainly! The metamorphoses express universal fluidity. The boundaries between humans and nature merge, blur. We are at the crossroads of worlds, at the origin of a mythical time. It is at the same time magical, mysterious and disturbing.

In this combination of elements and movements from one body to another, can we see the very breath of love circulating?
SE: There are two intertwined themes in this opera. On the one hand, the destruction of the environment, with a love triangle as a metaphor. On the other, our relationship to love and to the loved one, using the destruction of the environment as a metaphor. This ambiguity is significant. It leads us to ask ourselves: what is the object and what is the metaphor?

What musical form did you give to this poetic and symbolic tale which stages the irruption of the fantastic at the heart of the human drama?
SE: A succession of fifteen scenes, interspersed by a chorus, runs through the score in a constant movement where the story unfolds on several levels and ends on a dark note carried by the voice of the Forest, like a Greek chorus. In this exploration of fantasy and reality, love, desire and loneliness, nature and its creatures and, of course, transformation - life, in all its complexity, goes on.

How did you deal in terms of sound colours with these different universes that rub shoulders?
SE: On stage, the melodic world, a vocal trio and an amplified chorus, in the pit an acoustic instrumental space and in the stalls an electroacoustic instrumental space. For this, I called on the technology of Ircam and the computer production of Augustin Muller. Electroacoustic materials propagate, through loudspeakers in the theatre, sounds that suggest the presence of the forest and finally loudspeakers placed under the seats diffuse more concrete sounds, evocative of the hidden movements of nature. These entities dialogue and transform in echo to the theme of metamorphosis, creating an immersive sound environment.

Like flesh won the 2021 FEDORA Prize for Opera, which recognises innovation in opera. What do you think of opera written today?
SE: I want the codes of opera to be refreshed. Technological tools have a role here, but also the choice and the form of the subjects brought to the stage. Besides entertainment, opera can help us to reflect on contemporary issues, to change our perspective on themes such as the environment and gender.

Interview by Marguerite Haladjian, October 2021, reproduced with the kind permission of Opéra Magazine