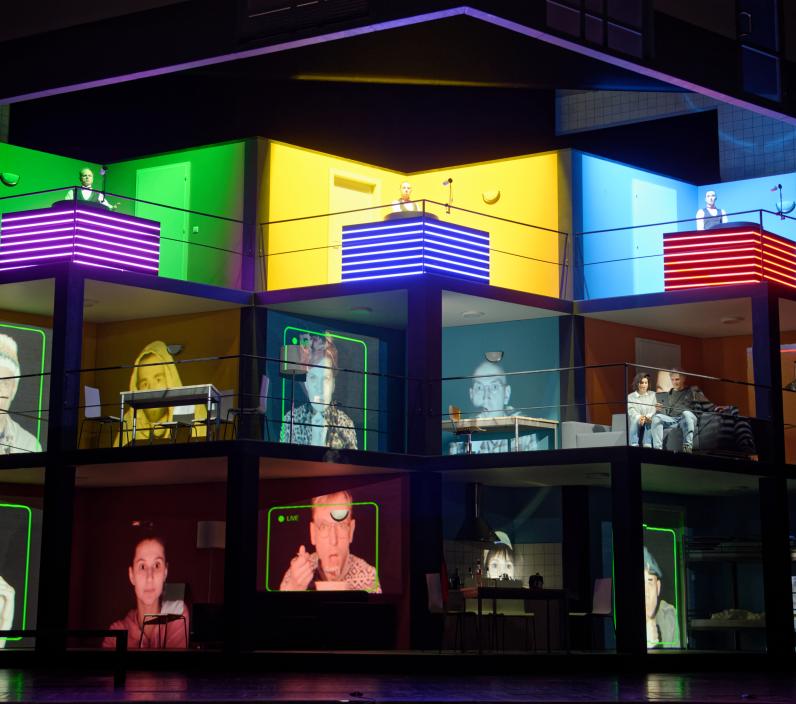 Prokofiev
This performance is no longer viewable as video-on-demand for rights reasons but other material about the production is still available.

A general and his stepdaughter are both heavily in debt. When the family's tutor, in love with the girl, gets lucky at the gambling table, he tries to rescue her from her desperate situation, but she outright rejects him.

Prokofiev's first full-length opera The Gambler, based on Dostoyevsky's partly autobiographical novella ironically written to settle gambling debts, is rarely performed today. This 2020 production brings together director Vasily Barkhatov and conductor Modestas Pitrenas and stars the winner of the 2019 International Opera Award, Asmik Grigorian, in the role of Polina and Dmitrij Golovnin as Alexei.

‘Prokofiev goes very deeply into the human nature […] and exposes the darkest features of the soul,’ says the conductor of The Lithuanian National Opera & Ballet's production of The Gambler.

In this complete interview, director Vasily Barkhatov and singer Asmik Grigorian tell us more about the Lithuanian National Opera & Ballet's production of Prokofiev's The Gambler. The staging, the roles, the music and the history of the piece will have no more secrets for you!

In Roulettenburg, the young Russian Alexey is in love with Polina, the General's ward. She had asked him to pawn her jewellery and gamble with the proceeds so that she might pay off her debts, but he tells her that he has lost everything. The General enters with his mistress Blanche, the Englishman Mr Astley, and the coldly shrewd Marquis, who is supplying loans to the General at exorbitant rates. Blanche questions Alexey about his losses, but he protects Polina and claims that it was his own money, saved from his salary. The General receives a telegram from Polina's grandmother in Moscow. He is desperately waiting for the old woman, Babulenka, to die so he can inherit her money and pay off his debts. He leaves with the others to reply to the telegram.

Polina is annoyed that she cannot repay her debts to the Marquis since Alexey has lost her money. When Alexey insists that he loves her, she asks him to prove it by doing her bidding and insulting a German Baroness, who is strolling nearby with her husband. Alexey does as he is told, provoking the Baron's anger and causing a scene.

The General reprimands Alexey for his behaviour and relieves him of his tutorial duties. Alexey replies that he should be allowed to act as he wishes and announces that he will challenge the Baron to a massive conflict. The General, wanting to avoid a scandal, asks for the Marquis's help in dealing with his former employee. Alexey returns, brooding, and learns from Astley that the General is afraid of scandal because it might jeopardize his intentions of marrying Blanche. Astley also explains that the wedding cannot take place until the General receives his inheritance from Babulenka.

In an attempt to control Alexey's behaviour the Marquis tries to reason with him, but he will not listen. The Marquis finally produces a note, supposedly written by Polina, telling Alexey to stop acting like a schoolboy. The young man accuses the Marquis of having forced Polina to write the note and storms out. The General enters with Blanche, eager to hear if the Marquis had any luck with Alexey. The Marquis shifts the conversation to Babulenka's health. As soon as the General predicts her imminent death, they hear the old lady's voice. She has come back, recovered from her illness, and announces that she is looking forward to gambling. Blanche suspects the General of false promises, while the Marquis hopes that his usual deceit will be sufficient to deal with the situation.

Babulenka has been losing large amounts at gambling. The General frantically tries to find a way to stop her, and when he learns that her losses have increased, he panics and decides to call the police. Blanche abandons him and leaves with another man, Nilsky. Alexey reflects on the fate of his former employer's family: only his love for Polina still connects him to them. Polina appears, and Alexey gets her to admit the Marquis's dishonourable behaviour toward her. They are interrupted by Babulenka. Having spent all the money she brought, she wants to return to Moscow and invites Polina to accompany her, but the girl says she cannot leave just yet. When Babulenka is gone, the General returns. He has lost Blanche and is financially ruined.

Alexey finds Polina waiting in his room. She is desperate and, for the first time, admits the nature of her relationship with the Marquis, who has abandoned her and is pressing her to repay the money she owes him. Alexey, thrilled that Polina has turned to him for help, runs off to win her money back.

Alexey joins a group of veteran gamblers and wins, again and again, finally breaking the bank. Gathering his money, he returns to his room and offers Polina the sum she needs to repay the Marquis. She insists on taking it only in exchange for her body. Alexey is insulted, but when Polina confides her love and hopes to him, they passionately embrace. She immediately regrets her action and, when Alexey hands her the money, she throws it in his face and runs out. Alexey is left alone, dementedly recalling his good fortune at the roulette table.

When Sergei Prokofiev was 18 years old, he became fascinated with Fyodor Dostoevsky’s short novel The Gambler. Published in 1866, the novel treated a subject not unfamiliar to its author: gambling. Indeed, Dostoevsky himself was caught up in an addiction to roulette which left him with crippling debts. To settle them, he agreed on a hazardous contract - itself a bet of sorts - that if he did not deliver a novel by a strict deadline, his editor would acquire the right to publish his works for nine years, without him receiving any compensation. The story he chose to dictate to his stenographer Anna Grigorevna carried many autobiographical traits.

It revolves around a strange group of people who, on the verge of financial ruin, are waiting in the fictional spa town of Roulettenburg for the blessing of a substantial, all-redeeming inheritance. Lusting for money as much as for affection, their hopes are dashed and their prospects doomed. The chapter in Dostoevsky’s own life, however, ended happily. With Grigorevna’s help, he was able to finish the manuscript on time. A month later, the novel’s author and stenographer were engaged to be married.

A language for strong emotions

In September 1915, the midst of World War I, Prokofiev, now aged 23, enrolled once again into conservatory to avoid military service. Escaping into the world of Dostoevsky’s novel, he decided to follow through with his plan to turn it into an opera. Working frantically, he transposed it into a libretto himself. He shortened some dialogues, expanded others and completely rewrote the roulette scene. According to his autobiography, the opera was composed during a time in which he was searching for ‘a language for strong emotions’. The result is a fast-paced, radically anti-Romantic work consisting of continuous musical declamation. As Prokofiev refrained from the use of arias, choral and ensemble pieces, apart from brief declamatory interjections in the roulette scene, the orchestra alone is responsible for the protagonists’ personal characterisation.

Modestas Pitrenas, conductor
The music of Prokofiev has a typical trail of the composers of anxiety-age. It is a twentieth century aesthetic with a strong sense of disaster. At the time, geopolitical intercontinental plates seemed to have begun to rub against one another... Naturally, this was reflected in the music as well.

The piano reduction was completed in only five and a half months and the full score was ready in January 1917. The first orchestra rehearsal still took place in January. However, the singers protested against parts they considered to be too difficult and the production was ultimately abandoned in May 1917 after the Russian Revolution in February.

The work would not be premiered until a decade later. Between 1927 and 1928, Prokofiev revised The Gambler’s vocal parts and instrumentation. In a letter to the composer Nikolai Myakovsky, he wrote that it was ‘essentially a completely new version, although the main themes and the plan remained the same’.

Sergei Prokofiev in his autobiography
The ten years that had passed since the composition gave me the opportunity to see clearly what was music in it and what was filling it with terrible chords. I threw these passages out and replaced them with others that I took mainly from those sections that I thought were successful.

The new version finally premiered on 29 April 1929 at the Théâtre Royal de la Monnaie in Brussels in a French translation by Belgian writer Paul Spaak. The production proved to be very successful and remained on the programme for two years. The opera’s reception history in Russia, however, was more problematic. Attempts to stage the opera in Leningrad or Moscow failed, as Prokofiev was considered an enemy of the system after his emigration in 1918. After his return home in 1936, The Gambler no longer conformed to the current ideology of Socialist Realism. As a consequence, its Russian premiere under the baton of Gennady Roshdestvensky only took place in Moscow in 1963.

Dostoevsky is Prokofiev is Barkhatov

In the Lithuanian National Opera and Ballet’s production, which premiered in February 2020, director Vasily Barkhatov stayed as close to Prokofiev’s opera as the composer himself did to Dostoevsky’s novel. Recalling the time he was directing Eugene Onegin in Vilnius in 2012, he states: ‘I often emphasized that the opera should not be confused with Alexander Pushkin's work; here and now, the opposite is true: the opera equals the novel. Thus, The Gambler is Dostoyevsky according to Prokofiev.’

Barkhatov was inspired by the first paragraph in Dostoevsky’s novel, which describes how people usually imagine casinos: gambling tables and evening dresses, diamonds and champagne. The reality, the author warns us, is far darker and more dangerous. Barkhatov, therefore, decided to emphasise the disconnect between fantasy and reality. He translated the plot into today’s world, set in a shabby hostel where gambling has moved into the virtual realm. This choice underlines how ‘just as a true alcoholic doesn't care about what's in his cup - Cristal champagne or Chypre cologne, a gambler doesn't care how to gamble’. The outcome is a study in loneliness.