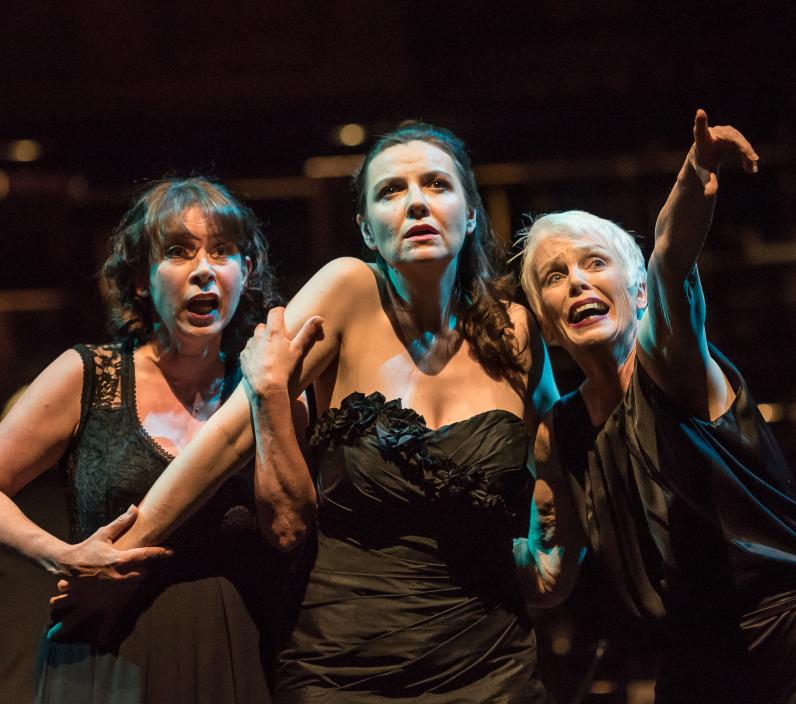 Are you ready for the final sacrifice? Will you be there to witness the world burn, so that a brave new world can be born?

The three Norns spin the rope of destiny.  Daughters of the earth-mother Erda, they know the past and present, but the future lies beyond their grasp.  The rope breaks.

Brünnhilde and Siegfried have spent the night together, but at dawn she urges him on to new heroic deeds (‘Zu neuen Taten’).  He journeys down the river Rhine to confront the world.

Gibichung Hall overlooks the Rhine and is home to brother and sister Gunther and Gutrune, and their half-brother Hagen, the son of Alberich. Hagen insinuates that their fame will be incomplete without marriage. Siegfried steps ashore here and is drawn into a blood-brotherhood pact with Gunther and, with the aid of a potion which induces forgetfulness, is seduced by Gutrune. To win her as wife, he undertakes to kidnap Brünnhilde for Gunther. As he sets off up-river, Hagen keeps watch and broods over his maturing plans to win control of the world which was once Wotan’s (‘Hier sitz’ ich zur Wacht’).

Alone on the mountain, Brünnhilde is visited by one of her Valkyrie sisters.  Waltraute describes the gloom of inaction which has overcome Valhalla, and how Wotan’s thoughts turned towards Brünnhilde (‘Höre mit Sinn’).  Sighting the ring on Brünnhilde’s finger, she begs her sister to return it to the Rhine daughters and thus break its curse.  Brünnhilde refuses to yield the ring, which was Siegfried’s pledge of love.

The skies darken, and a strange man invades Brünnhilde’s territory.  He declares himself to be Gunther, come to claim her as bride, but is in fact Siegfried disguised by the magic helmet.  He wrests the ring from Brünnhilde, and places his sword between them for a loveless night.

Back at the Gibichung Hall, Hagen dreams of his father Alberich, who anxiously asks him to be true to his mission to inherit the world.

Siegfried has returned and is reunited with Gutrune.  Hagen summons the Gibichung vassals to witness the double wedding.

The captive Brünnhilde is led in and greeted by proud Gunther.  She discovers that, not only is she being forced into marriage, but that her Siegfried is being married to another.  When she notices the ring on his finger, she accuses him of betrayal. Siegfried swears on Hagen’s spear that he is innocent. Brünnhilde grabs the spear and says that he is guilty.

Once Siegfried and Gutrune and the vassals have returned to the celebrations, Brünnhilde succumbs to her despair (‘Welches Unholds List’).  Hagen offers to avenge her for Siegfried’s perjury, and compels Gunther to join the plot despite his oath of blood-brotherhood.  Together all three invoke their respective forces for revenge.

On the banks of the Rhine, its three daughters lament the loss of their natural paradise.  Siegfried has detached himself from Gunther’s hunting expedition, and is drawn to flirt with them.  They see the ring and beg him to return it to them.  He is uninterested in its power, but, when their pleas become threats that he will die if he retains it, he defies them.

The Gibichung party finds Siegfried and persuades him to retell the story of his early life (‘Mime hieß ein mürrischer Zwerg’).  When he reaches the point where he first discovered Brünnhilde, Hagen slips him a drink which restores his memory.  To Gunther’s horror, he recounts the awakening on the mountain-top.  Two of Wotan’s ravens fly overhead.  As Siegfried looks up, Hagen drives his spear into Siegfried’s back.  The dying hero re-lives his most sublime experience (‘Brünnhilde, heilige Braut’).

The appalled onlookers gather Siegfried’s body to be borne down the Rhine for his funeral.

Gutrune anxiously awaits the return of the hunters at the Gibichung Hall. Hagen boasts that he has killed the boar, Siegfried.  When Gunther assails him, Hagen kills his half-brother too. But Brünnhilde calmly brushes aside the lamentations.  She commands a funeral pyre to be built (‘Starke Scheite’). She prophesies a world in which the former power will be swept away. She reaffirms her love for Siegfried and offers herself as a sacrifice to purge the old world and bring it rest. She rides into the flames, which engulf the hall and rise to destroy Valhalla. As the Rhine overflows to quench the fire, Hagen tries to retrieve the Ring of the Nibelung, but the Rhine daughters drag him down to his death.

'The resources and stamina demanded by the work, combined with its sheer length and theatrical potency, make it one of the most daunting yet rewarding undertakings in the operatic repertory.' - Barry Millington, pianist and Wagner scholar

Wagner had begun the composition of the opera Siegfried’s Tod in 1848, but had slowly realised that in order to tell the fall of the hero, he needed to explain Siegfried’s youth: the mystery surrounding his conception, how the Valkyrie Brünnhilde had been punished for saving his parents against the wishes of the god Wotan, and finally how the ring had been created and caused the old world to collapse.

This final chapter was actually the first in the conception of the cycle since it is the rewriting of the 1848 Siegfried’s Tod project: only after composing the three other operas did Wagner come back to his original project to conclude his epic cycle with the grandiose Götterdämmerung, composed between 1869 and 1872.

The 26-year lap separating the sketches and the final version are not without consequences on the stylistic unity: the music associates retrogressive elements of grand opera and motif integration representative of the composer’s mature style. Stylistic integrity is nevertheless maintained through the skillful merging of the elements and the dramaturgical intensity.