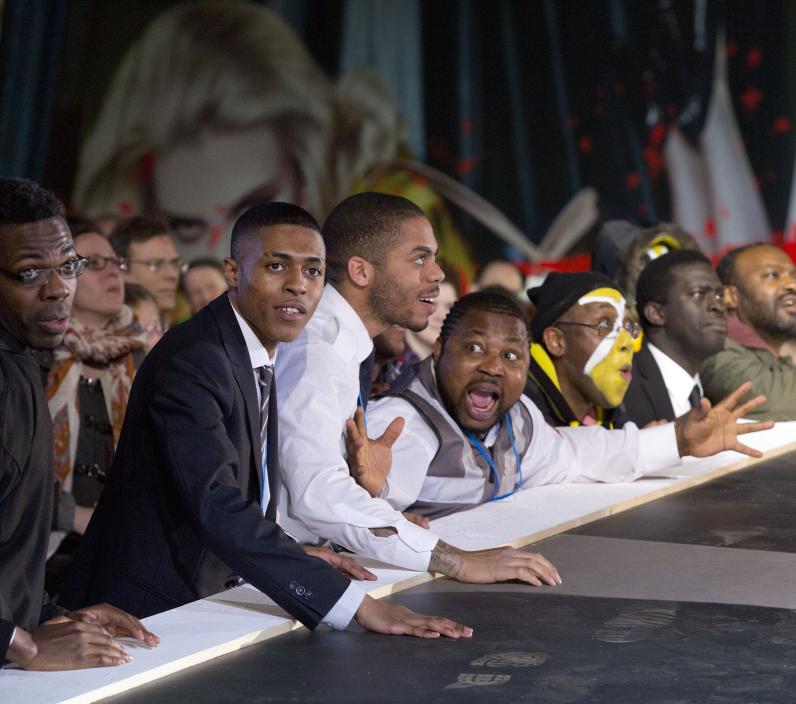 Tippett
This performance is no longer viewable as video-on-demand for rights reasons but other material about the production is still available.

When a Russian dissident is released after 20 years of imprisonment, he finds his wife in despair, his son estranged and the world outside sinking into racial violence. As events get out of hand, the rivalry between blacks and whites turns into a murderous mob riot.

Birmingham Opera’s artistic director Graham Vick takes up the challenging of mounting Tippett’s both visionary and eccentric opera, that has remained unstaged since its premiere in 1977. An unused warehouse is transformed into an airport terminal, through which the audience enters a participatory experience, ushered by the chorus.

Act I. Olympion (Ta’u Pupu’a), the new champion of the world, celebrates his blackness to the adoring fans. Directed by Graham Vick, conducted by Andrew Gourlay.

An airport lounge. After 20 years in prison camp, pacifist Lev is about to be reunited with wife Nadia and son Yuri. Yuri’s girlfriend Gayle and friend Hannah are waiting for the return of Hannah’s lover, Olympion, the new champion of the world. Olympion celebrates his blackness to the adoring fans. Gayle offers herself to Olympion. The fight which breaks out between Yuri and Olympion soon turns racist.

Violence divides the crowd. Yuri resents Lev’s homecoming – his father’s pacifism has done nobody any good. Yuri believes in action. Together Yuri and Gayle put on white masks and go to join their Klan. Nadia experiences a vision of death – but whose? The mob’s adulation drives a wedge between Olympion’s and Hannah’s love. Olympion leads his people to riot as Hannah experiences a long dark night of the soul. Olympion and Gayle are shot dead. Only Yuri survives.

With wife Nadia on the brink of death and his son’s life hanging in the balance, Lev loses all conviction. Learning that her son will live, Nadia asks Hannah to take care of her husband then drifts into childhood memories - and death. A crowd of Paradise seekers receive some good news, but mistake the messenger for the message. Yuri is given another chance at life. Hannah, now his nurse, helps the doctor cut away the cast. Yuri stands free, surrounded by cries of Spring and new beginnings. Lev and Yuri experience a moment of reconciliation. Yuri stumbles. Lev understands.

The Ice Break: a prophetic opera for our times

British composer Michael Tippett (2 January 1905 – 8 January 1998) might not be a household name to everyone, but he certainly deserves to be rediscovered today. During his lifetime he was considered a leading British composer on par with his contemporary Benjamin Britten. In the 21st century, however, his work has been more rarely performed.

The Birmingham Opera Company’s 2015 production of The Ice Break is an important step towards the revival of Tippett’s music. Written when he was in his 70s, The Ice Break has been all but forgotten since its first performance in 1977. Artistic director Graham Vick’s audacious staging now proves that it was ill-advised to neglect the opera too soon. Known for his experimental stagings, Vick conceived a production that mirrored the opera’s utopian force and highlighted its visceral political relevance.

Hugh Canning, The Sunday Times
Vick calls it a "visionary masterpiece", but that wasn't clear at the premiere, nor at the 1979 revival. Vick makes a stronger case than I believed possible for a piece that seemed dated in 1970s.

Indeed The Ice Break transcends its time and historical context to embrace a universal, humanistic message of overcoming social splintering along generational, racial and gender faultlines. Prepare to be unprepared as you immerse in Tippett’s universe. Its poetic plot deliberately breaks with realism, requiring a good dose of suspension of disbelief in the process. The story opens in an airport and spirals into a string of racist attacks and riots. Seeing the performance 5 years later in the light of the momentous Black Lives Matter movement, it is astounding how topical the opera seems today.

No other company is better placed to thaw The Ice Break than the Birmingham Opera Company, whose slogan is ‘not what you expect from opera’ for a reason. Rather than seating its audience in front of a stage, they invite them into an empty Birmingham warehouse, stupendously transformed into a busy airport lounge, riot-torn streets and a hospital for the occasion. The public experiences the opera while meandering through the impressive decor and interacting with the cast.

The cast, of course, is just as unique. Performed by professional musicians and singers alongside a huge volunteer cast of hundreds from right across the local area, the production engaged over 5000 people, 98% of whom had never seen the Company’s work before or potentially even heard of it. Over 6 months in 2015, local people came together with artists in-keeping with the themes of the production - exploring breaking ice of society and sharing and creating poetry, dance, music, visual art and film. No wonder that the Birmingham Opera Company is currently shortlisted for the FEDORA Education Prize.

Graham Vick
In this opera, the tension is not just between generations, but between first and second-generation immigrant… this opera addresses that front-on, and it’s a very potent thing to sing about in this city.

Vick's production commemorated the 30th anniversary of Birmingham's riots in 1985, when violent social conflict flared up on the streets of Handsworth in the summer amidst searing poverty, an unemployment rate of over 50% among black youth and deteriorating relations between the police and the community. The production explores attitudes to race, conflict and society and underlines the opera's continuing social relevance. By poetically depicting the fragmentation of humanity caused by the seismic changes in identity politics, it argues for the need to heal and unite beyond perceived differences. Her message could not be more urgent today.