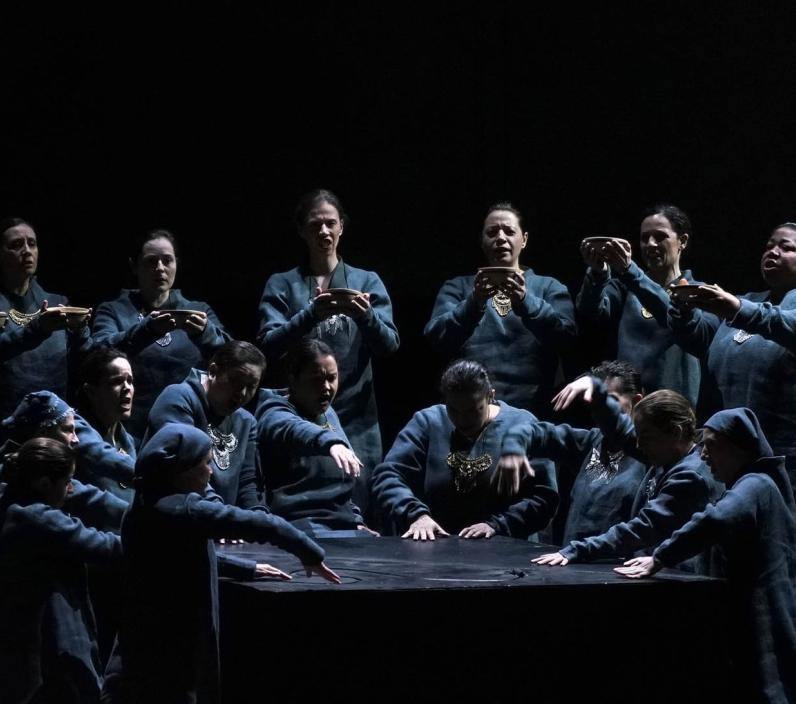 As Aragon descends into unrest, a count jealously fights for a noble lady's heart. But she has already given it to a passionate troubadour whose mother holds a terrible secret.

This Verdi masterpiece overflows with dramatic tension and musical geniality, resulting in a story that increases in intensity throughout. Maria Agresta plays the unfortunate Leonora alongside Ludovic Tézier and Francesco Meli as her rival admirers in this new production at the Teatro Real.

Leonora (Maria Agresta) has gone to a prison where Count di Luna is keeping Manrico and his mother captive. She wants to see Manrico and hopes that her love for him will sustain him in his darkest hour. Conducted by Maurizio Benini and directed by Francisco Negrín.

Count di Luna (Ludovic Tézier) has learned that Leonora has decided to enter a convent after hearing that her love, Manrico, has died in battle. But the count also loves Leonora and announces it to the world while he waits outside the convent for the right moment to kidnap her. Conducted by Maurizio Benini and directed by Francisco Negrín.

Sometimes opera pops up where you least expect it! In this video filmed at the Corte Inglés Preciados department store in the centre of Madrid, the Teatro Real Chorus sings 'Vedi! Le fosche' - also known as the Anvil Chorus or the Gypsy Chorus - from Giuseppe Verdi's opera Il trovatore. The forty-five singers are conducted by chorus master Andrés Máspero.

Within the guardroom at the Palace of Aragon, Captain Ferrando orders his men to keep watch while Count di Luna waits underneath Lady Leonora’s bedroom. The count is in love with Leonora but she is in love with a troubadour called Manrico. In an effort to keep the guards from falling asleep, Ferrando tells a story about the count:

Many years ago, a Gypsy woman made the count’s baby brother turn weak and ill. The king - the young boys’s father - sentenced her to be burned at the stake. As she burned, she commanded her daughter, Azucena, to avenge her. Azucena kidnapped the baby and threw him into the fire to burn alongside her mother. Though an infant’s bones were found in the ashes, the king refused to believe that they belonged to his son. Several years later, while he lay on his deathbed, he commanded his son, Di Luna, to seek out and punish Azucena.

Inside her room, Leonora confides in her friend, Ines, and tells her she loves Manrico. She hears Manrico’s voice outside in the distance and runs outside to greet him. In the dark, she mistakes Di Luna for Manrico, but luckily Manrico soon appears. She quickly runs to his side to embrace him. In a fit of jealousy, Di Luna challenges Manrico to a duel, which he accepts.

Inside the Gypsy camp, Azucena recalls her mother’s plea for vengeance. She tells her son, Manrico, a life-changing story: when she tried to kill the king’s son, she mistakenly grabbed her own baby and threw him into the fire instead. Manrico realises he is not her biological son, but promises her that his love for her is unchanged. He swears to his mother that he will help her seek vengeance, and regrets the fact that something prevented him from killing Di Luna even though he won the duel. A messenger arrives bringing news that Leonora, believing that Manrico is dead, has entered into a convent. Determined to stop her, Manrico makes haste to Leonora despite his mother’s objections.

Outside the convent, Di Luna waits for the right moment to kidnap Leonora. She and the nuns appear in procession and Di Luna sets his plan in motion. At that very moment, Manrico arrives and saves Leonora. The two quickly set off hand in hand, escaping Di Luna and his men.

Di Luna has set up camp not far from the castle where Manrico and Leonora are staying. Ferrando brings in Azucena after finding her wandering outside. She claims to be looking for her lost son. When Di Luna reveals his identity, Azucena is taken aback. In that moment, Ferrando recognizes her as the murderer of Di Luna’s younger brother. Di Luna orders her to be burnt at the stake.

Inside the castle, Manrico and Leonora are about to give their hands to one another in marriage. As they say their vows, Manrico’s friend, Ruiz, rushes in to tell them that Azucena has been captured and sentenced to burn at the stake. Stopping everything, Manrico summons his men and desperately prepares to attack.

Manrico has been captured along with his mother. Wanting nothing more than to save the man she loves, Leonora pledges herself to Di Luna in exchange for Manrico’s freedom. But before he can possess her, she secretly swallows some poison.

Within their cell, Manrico comforts his aging mother, who is falling asleep. Leonora arrives and urges Manrico to escape. However, after hearing the deal she made with Di Luna, Manrico feels betrayed and refuses to leave his cell. Within moments, the effects of the poison begin to show. As she dies in agony in Manrico's arms, Leonora confesses that she prefers to die with him than to marry another. Having heard Leonora’s final words, the count orders Manrico’s execution. Azucena awakes and tries to stop di Luna, but it is too late. She cries out that her mother has finally been avenged, for Di Luna has killed his own brother.

Manrico, the Verdian hero and the force of destiny

The dramatic action of Il trovatore takes place in the 15th century during the civil war that pitted James II the Unfortunate - Count of Urgell and pretender of the Aragonese crown after the death of Martin the Humane - against Fernando the Honest of the House of Trastámara, who was finally proclaimed king in the Compromise of Caspe in 1412. This is the context in which dramatist Antonio García Gutiérrez placed his tragedy El trovador, which premiered at the Teatro del Príncipe in Madrid in 1836 to considerable success.

The liberal writer and journalist Mariano José de Larra was one of the first to knock the play off its pedestal and to consider it simply as a ‘wholly romantic’ work. Years later, the realist novelist Benito Pérez Galdós would say that García Gutiérrez's text hid ‘a revolutionary core underneath its cloak of chivalry: the common people are exalted, the forsaken man of obscure ancestry formed and strengthened in solitude; and the upper classes are presented in a bad light as selfish, tyrannical, lawless and inhumane.’

As Larra said, the work is ‘wholly romantic’: firstly, because it takes place in the world of medieval chivalry and romance - a castle, a battlefield, a cloister and a prison - which the romantics always preferred to the classical world; and secondly, because the protagonist radically escapes the classical archetype of a powerful man faced with the responsibility of his duty.

Manrico, the protagonist of Il trovatore, embodies the very essence of the tragic romantic hero, forced to play the game of life with cards marked by an adverse destiny: he is a social outlaw who believes himself to be the son of a gypsy; he is a rebel politically committed to the defeated Urgell dynasty; he is a sensitive soul who, as a troubadour, is dedicated to composing poems to be sung by minstrels; he rejects social norms and any sense of authority; and on top of all that, he is in love with, a lady-in-waiting who is, in principle, completely untouchable.

We soon discover, however, that this lady is in touch with Manrico, and so she too is challenging these social norms, indifferent to the threat that comes from having a lover from such lowly origins. In contrast, Count di Luna is the very incarnation of the romantic anti-hero: powerful, belonging to the victorious Trastámara faction, cruel, implacable and rejected by the lady he desires.

The action is framed by two obsessions - the passion for love and the passion for revenge -  that converge in the figure of Manrico. They are played out by the two female protagonists: the aristocrat Leonora, who is Manrico’s lover; and the gypsy Azucena, who has raised him since his birth and whom he believes to be his biological mother. Through both plotlines, Manrico becomes the tragic victim of di Luna’s intrigues.

It is the fateful crossing of amorous and vengeful passions that leads to one of the brothers unknowingly executing the other. That is why Galdós said, ‘the fact that the two rivals are actually brothers is important: it is nothing other than the principle of equality, proclaimed in a dramatic way.’ All this within the very Verdian idea of a ‘force of destiny’ that collides with the hero’s efforts. According to the historian Pierre Milza, ‘Verdi had his own unique style from the beginning of his career, giving all his works a pessimistic and Promethean tone. Pessimistic, since Verdi’s hero is defeated at the end, just like man in his fight against death. Promethean, since his physical struggle against his destiny legitimises his existence and raises him to the level of greatness.’

Joan Matabosch is the artistic director of the Teatro Real.