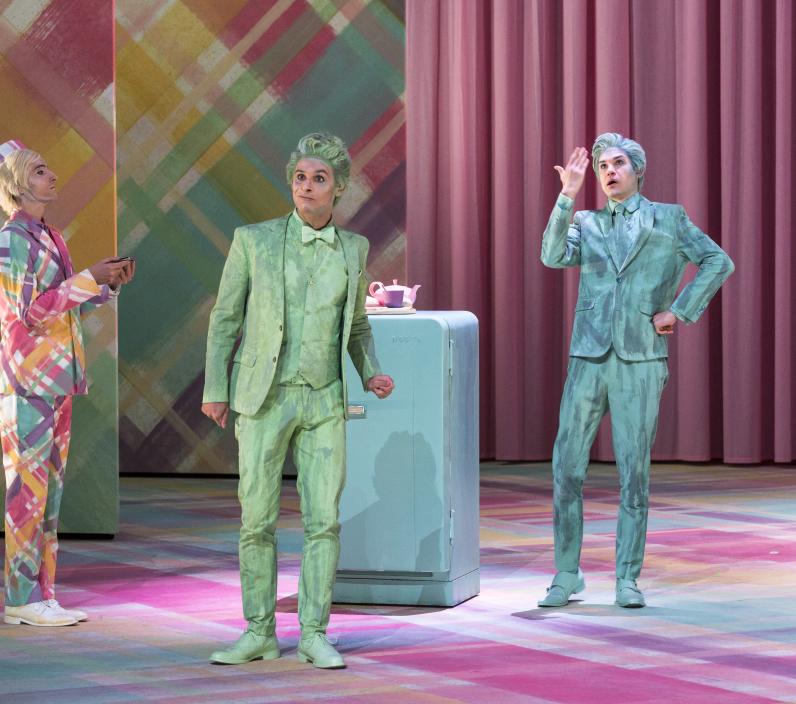 The Importance of Being Earnest

Barry
This performance is no longer viewable as video-on-demand for rights reasons but other material about the production is still available.

An idle country gentleman lives a double life as a city libertine. But when he proposes to his best friend’s cousin, the mysteries of his past begin to unravel.

Winner of the 2012 Royal Philharmonic Society Award for Large-Scale Composition, Gerald Barry’s adaptation of Oscar Wilde’s farcical comedy has become one of the most celebrated new operas of this decade. This colourful new production by Nouvel Opéra Fribourg has been praised by ConcertClassic as ‘a joyful hallucination, with millimetre precision,’ thanks to its witty stage direction by Julien Chavaz and electric tartan designs by Severine Besson.

TRAILER | THE IMPORTANCE OF BEING EARNEST Barry – Nouvel Opéra Fribourg

And this is what you call Bunburying?

Act II. Jack (Timur Bekbosunov) and Algernon (Ed Ballard) have been exposed as 'Bunburyists' and liars by their respective fiancées. The two men are left to quarrel with each other over who should be allowed to change his name to Ernest and about the appropriate way to eat muffins. Conducted by Jérôme Kuhn and directed by Julien Chavaz.

Everything is quite ready for the christenings

Act III. Miss Prism (Jessica Walker) reveals that twenty-eight years earlier, while working as a governess in the Bracknell household, she had inadvertently left a baby boy in a bag at Victoria Station. Conducted by Jérôme Kuhn and directed by Julien Chavaz.

In this interview with director Julien Chavaz, discover his obsession with colours and the motivations that led him, alongside costume designer Severine Besson, to present such an electric production of The Importance of Being Earnest by Gerald Barry at the Nouvel Opéra Fribourg.

Algernon Moncrieff is playing the piano offstage while his manservant, Lane, lays out afternoon tea for his master’s two expected guests: his aunt, Lady Augusta Bracknell, and her daughter, Gwendolen.

Lane announces the arrival of Algernon’s friend Ernest, who is also known as Jack Worthing – and who is utterly besotted with Gwendolen. Algernon has come across Ernest’s cigarette case inscribed with the message ‘From little Cecily, with her fondest love to dear Uncle Jack’. He declares that Ernest may not marry Gwendolen until he reveals the true identities of Jack and Cecily. Ernest explains that he is ‘Ernest’ in town and ‘Jack’ in the country, and that Cecily is his ward. As far as Cecily is concerned, Ernest is his ne’er-do-well younger brother who is always in some kind of trouble. Algernon admits that he also leads a double life by pretending to have an invalid friend named Bunbury who often requires his presence in the country.

Jack proposes to Gwendolen and is accepted. How can she not love a man whose name is Ernest? Having discovered that her daughter has become engaged, Lady Bracknell quizzes her future son-in-law about his lineage. When she discovers that he knows nothing of his parents and that he was adopted, having been found in a handbag at Victoria Station, she refuses to countenance the match. Jack manages to give Gwendolen his address in the country, which is also noted by Algernon who scribbles it on his cuff. As his guests depart, he tells Lane to put out his country clothes as he will be visiting his friend Bunbury.

In the country, Cecily is studying German with her governess, Miss Prism. Algernon, masquerading as her guardian’s brother Ernest, arrives and quickly charms Cecily. It is her dream to marry a man who is wicked and bad and called Ernest. Algernon quickly makes plans for Dr Chasuble, the rector, to rechristen him Ernest. Meanwhile, Jack arrives with the sad news that Ernest has passed away in Paris. But Ernest is here, says Cecily.

Gwendolen also arrives in the country. As Cecily is giving her tea, the two young women discover that they are both engaged to ‘Ernest’. United as sisters now, they expose Jack and Algernon as liars and leave them to quarrel with each other.

Cecily and Gwendolen tell Jack and Algernon that they will only marry men called Earnest. The pair are agreed: Dr Chasuble will have to rechristen them both.

Lady Bracknell has joined them in the country and is shocked to discover that her nephew appears to have become engaged to Cecily without her permission. But when she discovers that the young woman is in possession of a fortune, her doubts are banished. However, Jack – in his capacity as Cecily’s guardian – refuses to give his consent to the marriage until Lady Bracknell permits him and Gwendolen to be united.

This Gordian knot is unloosed when Miss Prism reveals that twenty-eight years earlier, while working as a governess in the Bracknell household, she had inadvertently left a baby boy in a bag at Victoria Station. Discovering her error, she had fled. Jack produces the handbag. He is Lady Bracknell’s long-lost nephew and therefore Algernon’s older brother. His name is the same as that of his father, General Moncrieff which a search of the army records shows to be Earnest. Gwendolen is ecstatic. Now the two couples can be married and with them, Miss Prism and Dr Chasuble.

5 things to know about The Importance of Being Earnest

Oscar Wilde’s The Importance of Being Earnest was first performed at the St James's Theatre in London in 1895. The story revolves around two young men, Jack and Algernon, who maintain fictitious personæ to escape burdensome social obligations. Its high farce and witty dialogue have helped make the play the most enduringly popular piece of late Victorian satire. It was the Irish writer’s last work for the stage and is considered to be his best.

There have been several musical adaptations of Wilde’s play, though few have stood the test of time. The earliest example is Oh Earnest, an American musical from 1927. ‘From almost any point of view it seems to be below the average of musical comedies,’ wrote Brooks Atkinson in his review of it for The New York Times. The Broadway critic prefered Ernest in Love, a 1960 Off-Broadway musical with lyrics by Anne Croswell and music by Lee Pockriss: ‘Everything has been done in the most impeccable taste [and] the whole performance radiates sly good nature.’ The Scottish composer Erik Chisholm wrote an opera from the play in 1963, using Wilde’s text as the libretto, and a year later Mein Freund Bunbury by German composer Gerd Natschinski opened at Berlin’s Metropol-Theater.

The Los Angeles Philharmonic and London’s Barbican Centre jointly commissioned Irish composer Gerald Barry write an opera based on The Importance of Being Earnest, which he completed in eight months. He adapted the libretto himself from the original play, cutting the text substantially while retaining the complete plot as well as many of Wilde’s most famous lines. ‘The text was far too long,’ says Barry, ‘and I had to cut around two-thirds of it, but the structure is so strong that I think people will hardly notice. I got rid of all the social niceties, which gives it a different tone – the butler is not so polite as he was!’ He also turned the upright Lady Bracknell into a skirt role for a bass singer, explaining that he thought of her as a big rugby player from Wales.

The first concert performances of Barry’s new opera were given in Los Angeles in April 2011, with Thomas Adès conducting. The critical reception was very positive: ‘The score is highly sophisticated and indescribably zany,’ wrote Mark Swed in his review for The Los Angeles Times. ‘The world now has something rare: a new genuinely comic opera and maybe the most inventive Oscar Wilde opera since Richard Strauss’ Salome more than a century ago.’ Adès subsequently conducted concert performances in London and Birmingham in April 2012, and the opera was first staged in May 2013 at the Opéra national de Lorraine.

The Importance of Being Earnest won the 2012 Royal Philharmonic Society Award for Large-Scale Composition. ‘Liberation and exhilaration marked its London premiere,’ said the judges, adding: ‘The forceful originality of this work smashes conventions alongside plates, and miraculously provides the most well-worn quotes with a freshness and originality.’ Barry’s opera has since become one of the most celebrated new operas of the decade and has already been staged in three different productions. This fourth one by Nouvel Opéra Fribourg sees director Julien Chavaz and designer Severine Besson employ all their wit as well as an electric tartan colour scheme. ‘The staging fully underlines the comic potential of the music,’ writes Laurent Bury in his review for Forum Opéra. ‘The result is extraordinary.’