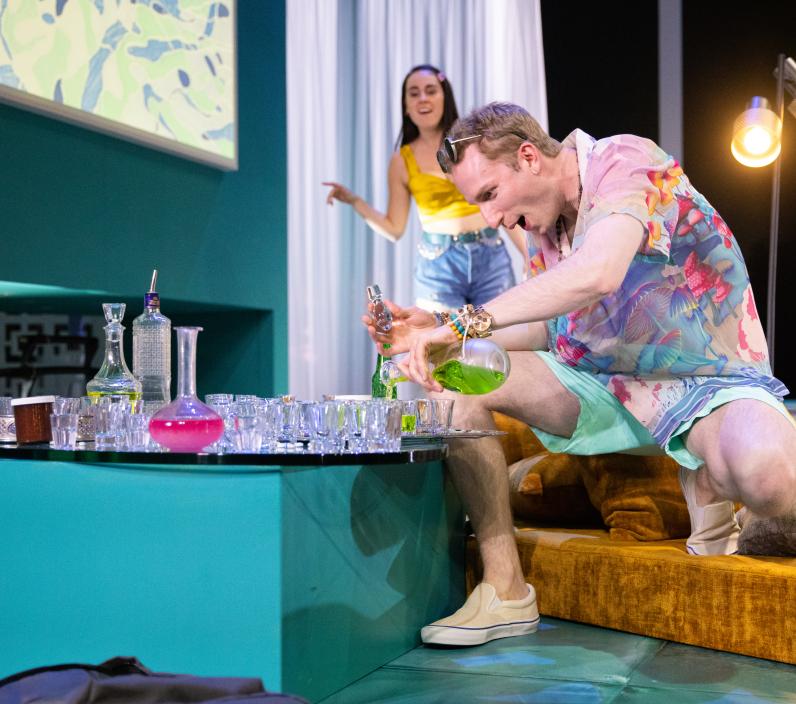 A sweltering Italian summer evening. The romantic tension between Adina and Nemorino electrifies the air. But they are not alone. A group of friends puts their love and social standing at risk.

Director Marcos Darbyshire’s contemporary version of Donizetti’s comic opera L’elisir d’amore is a coming-of-age opera exploring identity and loss of innocence. ‘There will be a lot of laughter, but with rather than at the characters’ promises the director. The all-Dutch co-production between Opera Zuid, Dutch National Touring Opera and Dutch National Opera features an excellent young cast from the Dutch National Opera Studio.

Director Marcos Darbyshire’s contemporary version of Donizetti’s comic opera L’elisir d’amore is a coming-of-age opera exploring identity and loss of innocence. ‘There will be a lot of laughter, but with rather than at the characters’ promises the director. The all-Dutch co-production between Opera Zuid, Dutch National Touring Opera and Dutch National Opera features an excellent young cast from the Dutch National Opera Studio.

The young, somewhat geeky and naive Nemorino is silently and desperately in love with the hip and rich Adina. She, however, is candid about not being in love with him. By ‘chance’, she recites the love story of Tristan and Isolde, a myth about an elixir of love that brings two lovers together. Nemorino then has the idea to acquire a love potion so that Adina will fall in love with him.

Nemorino’s rival, Belcore, soon appears and uses his daring and strength to get Adina’s attention. But Nemorino, determined, tries to convince Adina that he is the one, and she shouldn’t easily surrender to the braggart Belcore. Adina again rejects Nemorino. But he finds himself another glimmer of hope ...

The conman Dulcamara arrives on the scene with an arsenal of miracle cures for every situation. He has a remedy for Nemorino: a magic potion to attract the love of his dreams. Nemorino, convinced his advances will work this time, again tries to woo Adina. Dulcamara’s miracle cure does not work after all. Adina has had enough. To hurt Nemorino deeper, she decides to marry Belcore that same day. Everyone declares Nemorino’s constant begging is making him crazy.

Belcore, playing on Nemorino’s feelings, convinces him to join the army and acquire a reputation and a wage. Nemorino still believes the drug will work. He uses his pay to buy another potion from Dulcamara.

Meanwhile, Dulcamara and Gianetta learn Nemorino has inherited a fortune from a late uncle. The news is a far more powerful elixir than Dulcamara’s potion. However, Dulcamara doesn’t tell Nemorino, who still believes in the magic potion.

Nemorino’s sudden popularity from his new status makes Adina jealous. She dare not admit it, but she is in love with Nemorino. She sees him in a different light and confesses her love to him. Nemorino does not know what is happening. Convinced Dulcamara’s drug is the cause, Nemorino thanks him for winning over his lover. Embittered, Belcore has to endure Nemorino’s victory.

It was all handed to me on a silver platter, says stage director Marcos Darbyshire. He was invited to direct Donizetti’s L'elisir d'amore in a contemporary version and, with Pedro Beriso, write a new arrangement for five soloists and twelve musicians since the coronavirus measures do not allow for a performance with choir. Add to this the opportunity to make this opera about love with five young talents from the National Opera Studio, then you are definitely in the right place. ‘These are the perfect circumstances for my vision of L'elisir d'amore – which is one of my favourite operas.’

Why do you consider L'elisir d'amore as a coming-of-age opera?

The opera explores identity and loss of innocence. To have the opportunity to work with a group of young performers, it doesn’t get much better. They still have that delicateness, which is key for the characters’ psychological growth. On a long summer evening, we follow the two protagonists’ emotional development. By dawn, they are different people. The notion of development, both individually and as a group, is at the heart of this opera. The characters’ interactions and the tensions between them accentuate their personal growth. These group dynamics play a prominent role in my stage direction.

Besides group dynamics, what are the other significant subjects?

The discovery of sexuality is crucial to this work because everyone remembers those feelings of doubt and not being ready or not knowing how to deal with this sexual tension. Of course, drinks and stimulants also matter in my stage direction. The text leaves no doubt about that: Nemorino gets drunk. But it’s too easy to laugh at him. What happens if everyone gets drunk and suddenly makes stupid decisions? Would that group dynamic change anything?

Pedro Beriso made an adapted musical arrangement in collaboration with you. Did this present any challenges?

To begin with, the libretto in L'elisir d'amore is simply fantastic. The structure is perfect. Each character has a particular presence, and every interaction is in the libretto. It all falls into place in Donizetti’s music. Since we are performing a version tailored to coronavirus measures, we’ve had to shorten the opera. It was a challenge, but we did very well. We consistently responded to how we can get the material we need for what I have in mind for the opera. Fortunately, Pedro understood that the relationships between the characters are more important to me than the storyline, which gave me the freedom to enrich some of the characters.

How did you do that?

Adina’s rejections and the reactions of her popular group of friends are a big blow to the confidence of the inexperienced Nemorino. But I didn’t want this to be a reason to laugh at him. I want the audience to identify with him. His suffering is so real that you feel for him. Hasn’t everyone felt like Nemorino? He hasn’t yet found his place in the world; that is, his position in the world of the others. Social standing plays a vital role in this. In contrast, Adina’s popularity and wealth relieve her of having to fall in with the group. At least, it seems so. She also has insecurities but can easily hide them. Her character is also layered and complex. When other girls throw themselves at Nemorino, she gets jealous and realises her true feelings for him.

And how did you add more depth to the other three characters?

For the new musical arrangement, we had to tinker with the partygoer and swindler Dulcamara. Based on the original text, I tried to make him more human: a smooth talker secretly trying to find himself. Furthermore, Belcore is a brash villain. I wanted his inner being for the arias so that we were able to give him more depth. Finally, Giannetta’s character is somewhat subdued in the original version because the chorus is so dominant. The advantage of having no choir in my production is Giannetta can stand out more and become a character in her own right: a young girl desperately wanting to be popular.

Is it complicated to expand upon existing characters?

The use of bel canto in Donizetti’s music makes it easier for me as a stage director to portray the characters from the inside. Together with Rossini and Bellini, Donizetti is the composer of the Italian bel canto from the early 19th century. In this singing style, the performer’s emotion and timbre play a major role. If you listen carefully, there are moments in the arias when you can indeed experience the characters’ thoughts, feelings and perceptions. In this version, we play with those different perspectives. And the use of stimulants changes the perception of reality to an even more extreme degree.

What emotion will the audience be left with after watching the performance?

‘I hope people see something of themselves onstage and that Donizetti reveals things about you that you didn’t know. The events take place in the sweltering atmosphere of an Italian summer, with a sun that dazzles and a night that envelops the characters with mystery and uncertainty. A night full of unprecedented possibilities.’