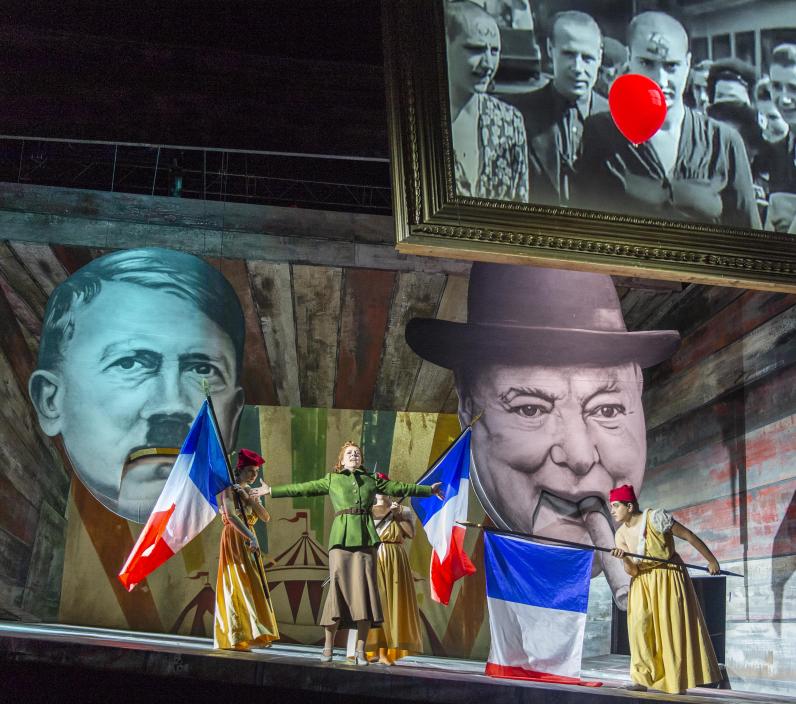 Albert and Yvette fall in love in Paris but at a bad time. It’s 1941. He is an occupying German soldier and clarinettist. She is a young French-Czech pianist. When the post-war authorities declare ‘No marriage between enemies!’ who can help the young lovers? Enter Emile: part Emcee, part guardian angel.

Leonore 40/45 is an opera written by Rolf Liebermann, Swiss composer and former artistic director of the Paris Opera. The style of the opera belongs to the 1950s, rooted in the 12-tone tradition of Schoenberg and Berg but lightened by lyric interludes and ‘semiseria’ sending up. The 1952 premiere in neutral Basel was a success but the subject matter proved too sensitive for audiences in Germany in the 1950s for whom reconciliation evoked collaboration. This October 2021 staging is part of Fokus ‘33, an ambitious programme by Theater Bonn to revive forgotten works from the first half of the 20th century. Liebermann was active in bringing opera nations together as the first President of FEDORA, the European Circle of Philanthropists of Opera and Ballet. He might have approved of OperaVision sharing this first staging of his opera for over 60 years with audiences online across the world.

Franco-German love in war and post-war

Behind the scenes of Leonore 40/45

The production faithfully adapts Liebermann’s composition for the stage. Between quotations from other operas such as ‘Pagliacci’, the action take place in World WWII bunker divided between German and French families, evoking a realistic atmosphere. The twelve-tone music is jazzy and harmonic, fun for both singers and audience. The background shows mirrors that symbolise the different ways in which the two families perceive the world.

The opera was premiered in Basel in 1952 and then toured to Germany, Austria and Italy where it was considered a scandal. Audiences at the time found it hard to accept a story of fraternity between former enemies. The War, which had ended only few years before, was too fresh in everyone’s mind.

A partially opened curtain, a dimly lit street. Monsieur Emile, part terrestrial-superhero, part winged guardian, announces a simple story of love, upon which he will comment and intervene actively, if the lovers or the authors do not know what to do.

Prelude: two houses, separated by a street. On the left, the German one and the French house is on the right. A black-white-red and a blue-white-red border post is between the two. Both houses are open at ground level, so that we can see into their respective rooms. At a window on the German side, father and son Albert are listening to Beethoven's Fidelio on the radio. The broadcast is abruptly interrupted by the announcement of mobilisation. The call-up is for Albert, the young oboist with a Mendelssohn scholarship, who is about to graduate. His father, an old social democrat, loudly condemns the deadly regime of lies and expresses the hope Albert will at least serve in the music corps.

On the French side, Germaine and her daughter Yvette read in the newspaper about the German mobilisation. Husband and father Paul were killed in World War One. In contrast to the mother Yvette, the 28-year-old piano student, is not afraid of the war; she has hangs onto her childhood belief in a guardian angel.

Scene 1, a concert hall and foyer in Paris, winter 1941/42. While the audience is turning its back on the twelve-tone piano music in droves, Yvette and Albert find themselves in the foyer of the concert hall, united in their common love for the new music. They met before at the Moulin de la Galette and had helped each other in raids. Given that all people are equal, the mother invites the couple to join her.

Scene 2, a small café on Place Pigalle, late fall 1943 at late twilight. Albert and Yvette declare their love for each other and vow to never part.

Scene 3, a square in Paris, 21 August 1944 at dawn. Albert decides to follow his troops and appeals to Yvette's reason; she wants to hide him with her. Yvette, however, no longer believes in the liberation through ‘guns and blood’. She only believes in the ‘love that is stronger than hate’.

Scene 1, a barracks in France, August 1945 at around half past six in the evening sun. While the German soldiers lament their fate, Albert longs for Yvette. Emile feels compelled to intervene. The story is too sad to continue. He conjures up a Swiss idyll.

Scene 2, a chalet with a flower-lined path between Chur and Wallenstadt. Yvette finds in Emile her guardian angel and begs him to tell her whether Albert is still alive and where he is. Emile knows the answer: Albert works for an instrument maker in Epernay, who is looking for a German-speaking secretary for his export business. Emile will take Yvette to Lejeune-Frères on his flight coat, so that she can apply for the job.

Scene 3, the office and sales room of the instrument maker Lejeune-Frères, Epernay, September 1945. A bright day, around noon. Albert wants to improve the German language skills. Given Yvette's nationality and knowledge of German, she is hired.

Scene 4, a tribunal room, after 1945. Everything is in darkness for the time being with only a light in front. The wedding of Yvette and Albert is initially stubbornly contested by the tribunal; ‘No marriage between enemies!’ Yvette speaks with ‘a voice that resounds in thousands of hearts’ but is not able to change the tribunal's mind. Emile comes to the rescue once again. He accuses the tribunal of inhumanity and praises Yvette, ‘My little Leonore, who has faced the foolishness of the world with the courage of her heart.’ The wedding can go ahead.

Leonore 40/45 is a sharply profiled work, which stands out from the ‘norm’ by virtue of both its musical and its textual structure.   It enjoyed a successful Basel premiere in 1952 but subsequently provoked pro and con demonstrations during the 1950s. Bonn’s landmark rediscovery will soon be followed by its Austrian premiere in Linz and it will also be performed in Vienna as part of the Musikfest.

Leonore 40/45 is a witty, amusing and thought-provoking work. The librettist Heinrich Strobel, music writer, editor of the Melos magazine and musical director of the Südwestdeutscher Rundfunk, belongs just as much to the contemporary, progressive guard as his colleague (also musical director) from the Zurich station, the composer Rolf Liebermann. Both possess wit and sharpness, stage-savvy instinct and those attributes - say, jest, satire, irony and deeper meaning - that give this opera its impact.

Seriousness and satire, hilarity and the grotesque are juxtaposed in harsh contrasts.  A German and French petty bourgeois milieu, on a stage divided in two as a prelude; a concert hall, as the platform of an anti-atonement demonstration; Paris, in the throes of invasion; the choral ensemble of German prisoners; the shop of a French instrument maker; the half-realistic, half-spooky tribunal (which could be by Wedekind): - all these images are enlivened with characters who have their sharp profiles. The old and everlasting story of two lovers separated by their nationalities is spread over the whole, while the connection between the scenes is placed in the magical hands, or in the head, of Monsieur Emile - a supernatural figure, half philosophical emcee, half disillusionist conjuror.

Liebermann has written music to accompany this anti-chauvinist, partly amusing, partly stirring opera text, which travels its own way through its style, its adaptability and its intellectual, yet witty, content. Its ancestors are Weill and Brecht, Paul Dessau, even Ernst Krenek, but no direct analogies should be made, because Liebermann decidedly has his own musical style, which has nothing in common with eclecticism. Since a music conditioned by the concept of opera semiseria has to refrain from extraordinary difficulties, the composer mostly uses a relatively simple, unproblematic language...