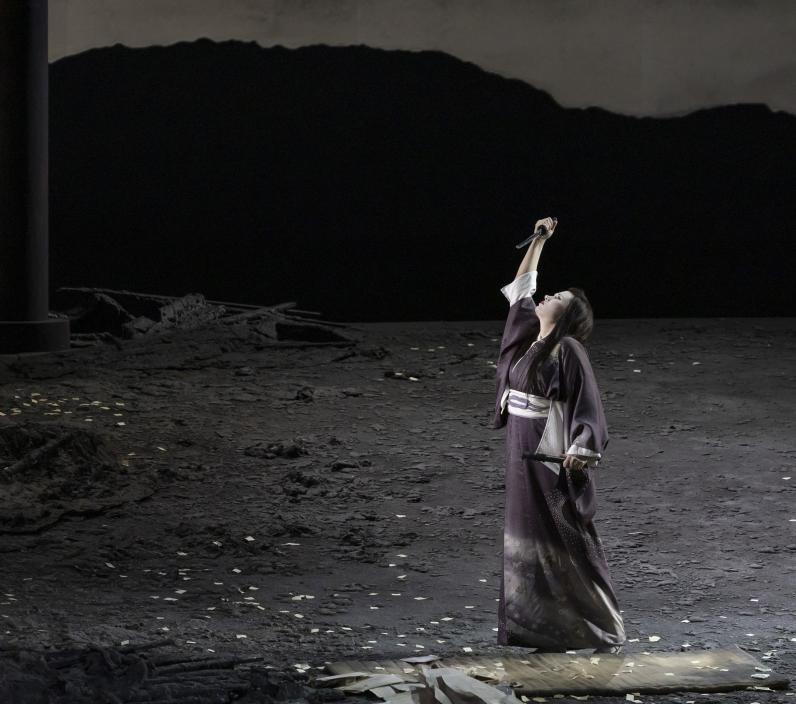 Puccini
This performance is no longer viewable as video-on-demand for rights reasons but other material about the production is still available.
Sung in
Italian
Subtitles in
English
French
German
Catalan
Spanish
Italian

A guileless Japanese girl gives up everything to marry a lieutenant in the US Navy. But when he suddenly leaves the country, she is determined to wait patiently until he sails back into harbour.

Marina Rebeka sings the soprano aria ‘Un bel dì, vedremo’ – one of the most famous pieces in the soprano repertoire – from Giacomo Puccini's opera Madama Butterfly.

Cio-Cio San (Marina Rebeka) gives up everything to marry a lieutenant in the US Navy. But when he suddenly leaves the country, she is determined to wait patiently until he sails back into harbour. In this scene, she imagines his return.

A hill near the city of Nagasaki, from which one can see the entry gate to the town. Pinkerton, a lieutenant in the United States Navy, takes a look at the quaint house which he has just bought to live in with Cio-cio-san (Madame Butterfly), a beautiful young geisha whom he is going to marry that morning. Goro, the man who has arranged the marriage, introduces the servants that the couple will have at their disposition at the country home. Among them is Suzuki, Butterfly’s maid. Pinkerton’s friend Sharpless, the American consul in Nagasaki, arrives and the two sit down together to have a drink and rest from the long journey. While they are relaxing, Pinkerton tells his friend of his love affair with Butterfly. Goro leaves to find Cio-cio-san. During their conversation, Sharpless notices that his friend is not truly in love with the young woman. He thus tells Pinkerton that he thinks the upcoming nuptials are a mistake. Pinkerton ignores what he feels are moralistic conventions and invites the consular agent to toast his upcoming marriage with a whisky.

The scene erupts with color and joy as Butterfly, her friends, family, and guests all arrive. The bride-to-be introduces her closest relatives to her prospective groom and reveals that she has just renounced her faith in order to embrace American religion and customs. Goro announces that everything is ready and that the ceremony may begin. The imperial commissary officer proceeds to read the official text of the marriage ceremony, after which various witnesses sign the marriage certificate. Then all the guests toast to the happiness of the newlyweds.

The joyous occasion is interrupted by a fanatic bonzo, Madame Butterfly’s uncle, who publicly rebukes the geisha for renouncing her beliefs. Her family and friends then turn on Cio-cio-san. In the face of such insults, Pinkerton is compelled to put an end to the celebration and drive the guests out. Afterwards, alone with his wife, he comforts her with soothing words. Butterfly is truly happy with Pinkerton. Night falls and the newlyweds go to their bridal chamber.

Inside Butterfly’s house. Three years have passed and Cio-cio-san lives in sadness. Scorned by her family, she is isolated and living in misery. Her only companion is her faithful servant Suzuki. Butterfly is convinced that her husband will return some day, as he promised her when he left for America shortly after the wedding. Suzuki, however, knows that once a foreign husband leaves the country, he never comes back. She thus harbors no hopes of his return.

Sharpless and Goro arrive. The consul brings word of Pinkerton for Butterfly, but the news is not good. Cio-cio-san, moved by the visit, lavishes Sharpless with attention. Goro mocks the geisha’s innocence in thinking that her husband will return after being away for three years. During this time, the matchmaker has tried to find her suitable, well-off husbands, but the geisha, ever loyal to her husband, has rejected all their proposals, even though she lives in abject poverty. Sharpless himself, while taking tea with Butterfly, witnesses the visit of prince Yamadori, who comes desperately to ask once more for the hand of Cio-cio-san, who has retained both her youth and beauty. His supplication is once again rejected before Sharpless’ disbelieving eyes. Sharpless cannot understand the geisha’s unshakable loyalty to a man who has so obviously abandoned her.

The consul does not know how to tell Butterfly without hurting her that Pinkerton has married an American woman and that the couple is about to arrive in Nagasaki. Sharpless shows Butterfly the letter in which the lieutenant has announced his plans and, not daring to make her face up to the terrible reality, tries to convince her to forget her husband. The geisha, hurt by Sharpless’ words, leaves the room suddenly. She returns holding a baby in her arms and introduces Sharpless to Pinkerton’s son.

The consul, sad and excited at the same time, tells Butterfly that he intends to intercede in the interest of the child and then he leaves.

A cannon shot from Nagasaki harbor, the views of which can be seen from the fragile Butterfly’s house, announces the arrival of Pinkerton’s ship. Butterfly is thrilled by the sound.
Mad with happiness, she begins, with Suzuki’s help, to prepare for her husband’s arrival. Night falls. Cio-cio-san, her son and Suzuki sit and wait without taking their eyes from the harbor.

Dawn. Suzuki advises Butterfly to go and lie down. They have stayed awake all night waiting in vain for Pinkerton and they are exhausted. Cio-cio-san retires with her son, after which Sharpless and Pinkerton arrive. They are received by Suzuki, who reproaches the lieutenant for abandoning his wife and leaving her in the direst misery.

The servant notices the presence of a lady (Kate Pinkerton) who wanders through the garden. It is then that Suzuki realizes that Pinkerton has returned with his American wife. Suzuki is horrified by the mere thought of the tragedy that is closing in on poor Butterfly when Kate asks her to convince Cio-cio-san to leave the child with them. For his part, Pinkerton, full of remorse, begs Sharpless to talk to the geisha and to comfort her in his stead as he does not have the courage to face her. He then leaves the house.

Butterfly awakes and immediately asks for Pinkerton. The presence of the stranger she finds in the company of Suzuki and Sharpless disconcerts the geisha, who asks to be introduced to the foreigner. The stuttering responses, the sad faces, and the tears in Suzuki’s eyes make Cio-cio-san understand what is happening and she approaches Kate Pinkerton. She tells her that she agrees to part with the child, but only if Pinkerton himself comes to ask it of her. Sharpless and Kate leave in search of the lieutenant. Butterfly, now alone, says several prayers and, after taking leave of her son, kills herself.

I consider that Madama Butterfly is one of the masterpieces of opera, and a highly significant operatic work for spectators, since the exceptional music of Puccini, so close to the world of soundtracks, and the story itself, help the public identify with the pain of the main character.

In this production, I have sought, above all, to clearly identify, in a more visual manner, the internal destruction of Butterfly – a destruction we are all capable of seeing except her. It is at the end of the third act when she removes the emotional blindfold she wears and sees the truth for herself, which she tries to accept, not without the pain of renouncing the only thing in the world that maintained this emotional link with Pinkerton – her son. To justify this destruction of the main character, I have conveyed the historical period in which the Americans launched the atomic bomb on Hiroshima and Nagasaki.

With absolute respect for this universal work, I maintain the same dramatic line and management of the cast as seen in both the notes of the musical score by the master Puccini and in the libretto. I hope that the public let the story take them away and fuel their emotions as much or even more than each of us during the magical time of the rehearsals.