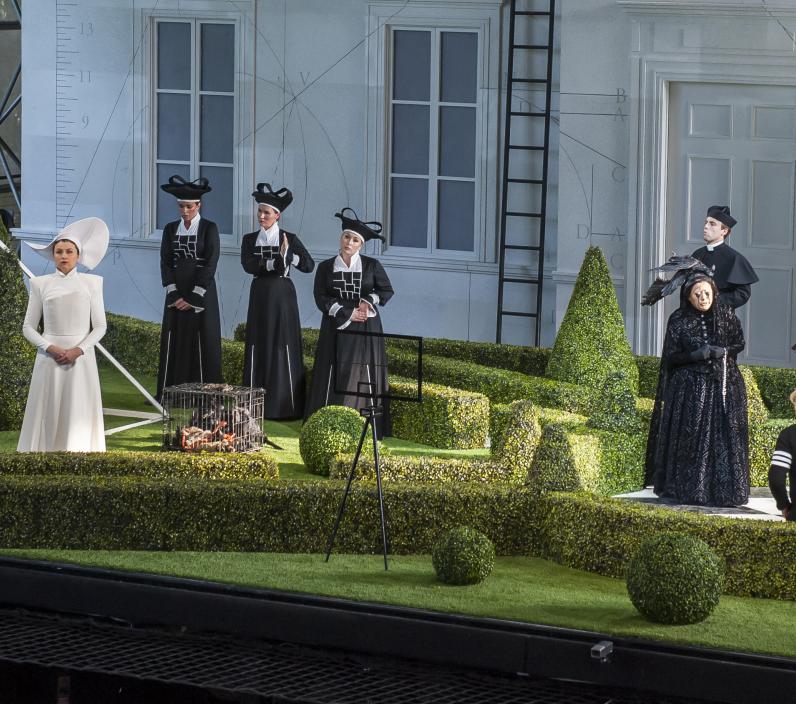 A handsome prince falls in love with an abducted princess. Armed with musical instruments, he and his singing sidekick mount a rescue mission that tests their commitment to truth, love and humanity itself.

This colourful and quirky new production of Mozart’s final opera is directed and designed by Netia Jones. The performance stars Louise Alder, winner of the Dame Joan Sutherland Audience Prize at the 2017 BBC Cardiff Singer of the World, in the role of Pamina.

Act II. Pamina (Louise Alder) is in love with Tamino (Benjamin Hulett) but he is not speaking to her, for he has taken a temporary vow of silence. Pamina tearfully concludes that he no longer has feelings for her and she sings with a broken heart.

Papageno (Jonathan McGovern) can hardly believe his eyes when he is reunited with his perfect match, Papagena (Lara Marie Müller). The pair are overjoyed and look forward to making a family filled with little Papagenos and Papagenas.

Ever wondered what the Three Ladies think about all the other characters in The Magic Flute? In this exclusive and candid interview, Katherine Crompton, Marta Fontanals-Simmons and Katie Stevenson reveal all!

Louise Alder plays Pamina and Jonathan McGovern plays Papageno in Garsington Opera's production of The Magic Flute. In this interview, the two British singers discuss their interpretation of their characters, their appreciation for director and designer Netia Jones, and their love of Mozart's music.

Tamino is pursued by a giant snake. As he loses consciousness he is rescued by three Ladies, servants of the Queen of the Night. Papageno, a birdcatcher, claims to have killed the monster himself, and is punished by the three Ladies. They give Tamino a portrait of Pamina, the Queen of the Night’s daughter, and he falls in love with her. The Ladies tell Tamino that Pamina was abducted by an evil man, Sarastro, leader of the brotherhood. The Queen of the Night laments the loss of her daughter and urges Tamino to rescue her. He will be accompanied on this mission by Papageno and the Ladies give them a magic flute and a set of magic bells to protect them. Three Boys will guide them on their way.

Inside Sarastro’s stronghold, Pamina attempts to escape from her lecherous guard, Monostatos. He is frightened off by the unexpected appearance of Papageno, who tells Pamina about Tamino’s quest to find her and about his own loneliness. Together they go in search of Tamino. The three Boys lead Tamino to the temples of Reason, Nature and Wisdom. Voices forbid him to enter by the first two entrances and, when he reaches the third, he encounters the Speaker, Sarastro’s deputy. He learns to think differently about Sarastro and discovers that Pamina is still alive.

Tamino plays his magic flute, which enchants even wild animals. Hearing the flute, Pamina and Papageno attempt to follow the sound but are caught by Monostatos and his men. Papageno distracts them by playing his magic bells. Sarastro and his followers gather and Pamina explains what has happened to her. Monostatos presents his most recent captive, Tamino, expecting a reward. Sarastro, however, orders him to be punished and invites Tamino to become an initiate to the brotherhood. As Tamino and Pamina see each other for the first time, they are abruptly separated.

Sarastro convinces his followers that Tamino is a suitable candidate for the brotherhood and tells them that Pamina has been chosen to be his partner: together they will secure a future free of evil. Tamino and Papageno are blindfolded and led away to undergo a series of trials, the first of which is to remain silent. Sarastro prays for them to be given the courage they will need. The three Ladies attempt to distract them into breaking their vow, but without success.

Monostatos again attempts to attack Pamina but her mother, the Queen of the Night, intervenes. She forces a dagger on her daughter and orders her to kill Sarastro. Monostatos witnesses this encounter and threatens to betray Pamina if she will not give herself to him. He is discovered and banished by Sarastro, who counsels and comforts Pamina.

Tamino and Papageno are still bound to silence. Papageno breaks his vow when he is accosted by an old woman who claims to be his girlfriend. The three Boys bring them food and drink and return the magic instruments. Tamino plays his flute and is heard by Pamina, who comes to find him. She is heartbroken when he refuses to speak to her.

Sarastro commends Tamino for his steadfastness but tells him that, although he will be permitted to see Pamina again, it may be for the last time. The two lovers are joyfully reunited, only to be separated once more. Papageno is told that he will be denied admission to the brotherhood but is given the chance to see the old woman momentarily transformed into a glorious creature, his very own Papagena.

In despair, Pamina attempts to kill herself but is prevented by the three Boys, who persuade her that Tamino really loves her. Pamina and Tamino undergo the final trials of fire and water together. Protected by the magic flute, they emerge triumphant.

Papageno has lost his Papagena and cannot contemplate life without her. The Boys remind him of his magic bells and, when he plays them, she appears. The Queen of the Night, Monostatos and the three Ladies mount an attack on Sarastro but are discovered and defeated. All join in praise of Tamino and Pamina, and celebrate the triumph of beauty, wisdom and light.

5 things to know about The Magic Flute

The Austro-Turkish war of 1788-1791 brought hardship to the musicians of Vienna as aristocrats tightened their purse strings. Food prices and taxes rose, there were riots over bread, and members of the cultural elite fled the capital fearing conscription for the war. Mozart’s anxiety over his financial situation severely reduced his compositional output. In debt, he was forced to beg for loans from friends. He also travelled outside Austria to give performances and secure new commissions, but this failed to earn him much money. With the war reaching its conclusion, wealthy patrons were once again able to offer their support to Mozart. His anxiety lifted and he recovered the will to compose. The year 1791 saw Mozart write some of his most celebrated works, including his Clarinet Concerto, Piano Concerto No. 27, String Quintet No. 6, and the operas La clemenza di Tito and Die Zauberflöte, known in English as The Magic Flute. His final opera opened at the suburban Theater auf der Wieden on 30th September 1791 with Mozart himself conducting. He died of unknown causes nine weeks later, leaving his Requiem Mass unfinished.

The librettist for The Magic Flute was Emanuel Schikaneder, a German impresario, dramatist, actor, singer and composer four years Mozart’s senior. He led a troupe of singers and actors that performed operas by Mozart, Haydn and Süssmayr in the theatres of Vienna. Several scenes in The Magic Flute resemble those from works of literature popular in the Austrian capital at the time, namely German translations of the medieval romance Yvian and the novel Séthos as well as the essay ‘Über die Mysterien der Ägypter’ (‘On the mysteries of the Egyptians’) by the scientist and Freemason Ignaz von Born. When the opera opened at the Theater auf der Wieden Schikaneder played the role of the lonely bird-catcher Papageno himself. He was deeply affected by Mozart’s death soon afterwards and arranged a benefit performance of The Magic Flute to support the composer’s widow, Constanze.

3° Three is the magic number

The number three is a recurring theme in the opera. The overture begins by proclaiming the three notes of the tonic triad of E-flat major, which has three flats in its key signature. Mozart was a Freemason and he associated this overriding key of the opera with that fraternal order. Then, in the course of his adventures, Tamino encounters three ladies, three child-spirits, three slaves and three priests who preside over three temples. The number three remains an important part of Masonic symbolism: brothers knock three times, they strive to obtain three degrees, and lodges are overseen by three principal officers.

4° The mysteries of the Egyptians

The Queen of the Night represents feminine power, the moon, darkness, negativity, irrationality and chaos, while Sarastro represents masculine power, the sun, light, positivity, rationality and order. Sarastro and his brethren worship two central characters in ancient Egyptian mythology, namely Isis and Osiris. Mozart himself visited the Temple of Isis at Pompeii as a child just a few years after it was unearthed. According to the story, Isis and Osiris had a son, Horus, who vowed to avenge his father’s murder by Set, god of chaos. This led to eighty years of contests and battles during which Horus lost an eye and Set lost a testicle. The gods eventually declared Horus the victor and order was restored to the world.

This new production of The Magic Flute for Garsington Opera is directed and designed by Netia Jones, whom The Observer has called ‘the most imaginative director of opera working in Britain today’. Jones is no stranger to the weird and wonderful world of fairy tale operas: she directed Unsuk Chin’s Alice in Wonderland for the Los Angeles Philharmonic in 2015, and there are colourful traces of Alice’s world in her staging of The Magic Flute. Jones also directed Britten’s A Midsummer Night’s Dream at the Aldeburgh Festival in 2017, but she is not the first to be inspired by the King of the Fairies: when Emanuel Schikaneder and his troupe arrived at the Theater auf der Wieder in 1789 the first opera they performed was Paul Wranitzky’s Oberon. Its success encouraged Schikaneder to produce more fairy tale operas, culminating two years later in his writing The Magic Flute.