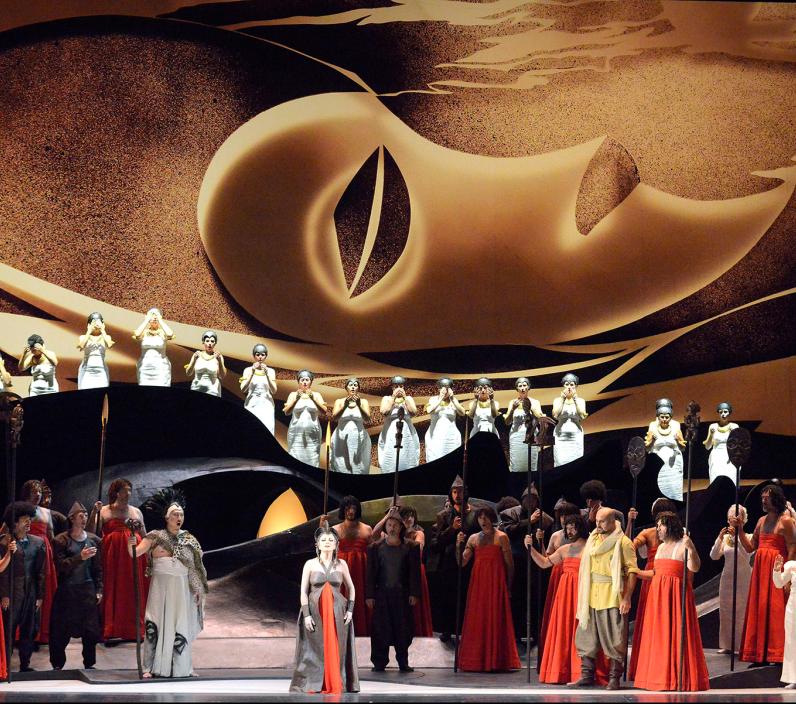 Mariella Devia, one of the greatest bel canto singers of 20th century, chooses Venice’s La Fenice as the stage for her last Norma.

For the last performance of her career, the great soprano Mariella Devia performs 'Casta Diva', the famous aria in the first act of the opera Norma. This aria is one of the most difficult of the repertoire, since it requires breath length, precision and several high C's !

The priest Oroveso and the druids visit the priestess Norma: they want to declare war on the Romans who occupy their land. Norma, who's in love with the Roman Pollione, sings a prayer to the goddess of the moon, asking for peace: "Calm the fire that burns in these hearts".

Mariella Devia talks about her love for Venice and her experience in the title role of Norma. As well as the freedom she gives herself to interpret this emblematic role of the Bel canto genre.

In Gaul at the time of the Roman occupation.

In the sacred forest of the druids at night. The high priest Oroveso and the druids invoke the gods for a sign to be given to them to make war on the Romans. Pollione, proconsul Roman, confides to his friend Flavius ​​that he no longer loves Norma, who has, however, broken her vows of chastity for him and gave him two children. He is now in love with another priestess, Adalgisa, and fears the vengeance of Norma.

Norma invokes the gods and, to protect Pollione, announces that the time has not yet come to wage war against the Romans. Adalgise, who thinks she is alone, reveals the secret of her love for Pollione, who hears her and offers for her to flee with him to Rome, which she accepts.

Norma’s residence. Adalgise, before leaving, confesses to Norma that she has fallen in love with a Roman. As this story resembling hers, Norma does not have the courage to condemn her, but she ends up understanding that the man Adalgise has fallen for is Pollione. Norma's anger explodes and Adalgise ends up giving up fleeing with Pollione.

Norma’s residence. It's night, the two sons of Norma and Pollione are sleeping. She is tempted to kill her children to hurt Pollione by destroying what is dearest to him but she can not. She comes to accept that Pollione and Adalgise live out their love but wants the latter to become a mother to her children. The young priestess does not want to betray Norma, she will go to Pollione only to remind him of his obligations in marriage. Moved by Adalgise’s renunciation, Norma promises her eternal friendship.

Near the wood of the druids. Gallic warriors invoke war. Norma is waiting for the return of Adalgise but learns that she has failed. Norma's anger is enflamed; she warns the warriors that it is time for war against the Romans. Rumor has it that a Roman has entered the temple to kidnap a priestess: indeed, it was Pollione, who tried to kidnap Adalagise. Norma begs him one last time, threatening to reveal the betrayal of Adalgise to the Gallic people. Against all odds, she incrimates herself in front of the crowd, and thereby condemning herself to death. Shocked by her gesture, Pollione asks her pardon and follows her in death.

5 things to know about Norma

While Bellini's opera was eagerly awaited by audience’s in Milan – the venue for the premiere was La Scala – the first performance on 26 December 1831 was not a success. Bellini was distraught and wrote to his biographer Florino to express his deep disappointment in these words: 'Fiasco! Fiasco! Serious fiasco!' And the reason? No doubt Bellini’s innovations were unpopular, such as the trio at the end of the first act where a great choral scene would have been expected. Strangely, however, the second performance was a huge success, which launch the production throughout Italy and above all abroad.

2° A milestone in the history of opera

An Italian opera par excellence, Norma contains the seeds of a significant evolution for bel canto and more generally in the history of opera. Norma is in a way the apogee of belcanto: it contains the characteristic virtuosity and ornamentation but the sense of drama is more developed; the singing is alternately lyrical and tragic. The character of Norma is the perfect embodiment of typically romantic dramatic power, mingled with the art of belcanto. This is precisely what makes it one of the greatest soprano roles and among the most difficult of the repertoire.

4° An opera admired by Wagner

'In Norma, where the poem reaches the tragic grandeur of the ancient Greeks, the strict forms of Italian opera, which Bellini ennobles and elevates at the same time, give relief to the solemn and grandiose character of the ensemble' (...) 'I admire in Norma the melodic inspiration, united with the deepest reality to the most intimate passion; a large score that speaks to the heart, the work of a genius' (quote from Richard Wagner extracted from the Chronological Dictionary of Opera, entry " Norma ", 1994).

5° The last Norma of Mariella Devia

This production of the Teatro La Fenice is not to be missed as the title role will be sung by one of the greatest bel canto sopranos of the 20th-21th century, Mariella Devia. She recentely celebrated her 70th birthday and will sing her very last Norma and for only three performances before taking - definitely? - her retirement.