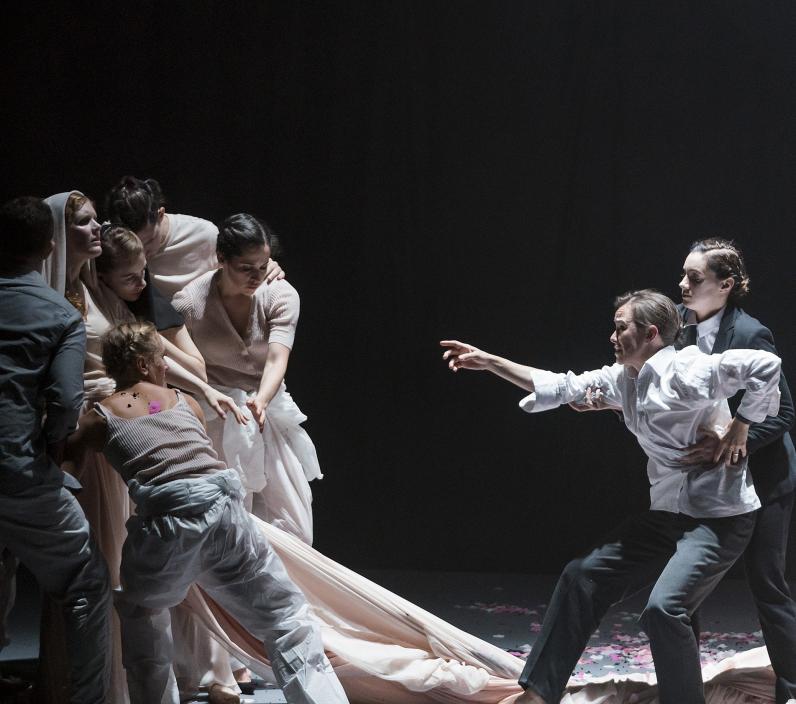 A grief-stricken musician goes to the underworld in search of his wife. He is allowed to retrieve her on one condition – that he not look at her until they are back on earth.

Gluck’s most famous opera was a radical departure from the musical dramas of the day. A revolutionary new mix of text, music and dance, it was the pinnacle of his pursuit for beautiful simplicity and dramatic truth. Sharon Carty delivers a compelling performance as the legendary Orpheus in this intimate production by the new Irish National Opera.

Act III. Orfeo (Sharon Carty) has finally looked at his beloved Euridice, who is consequently dragged back to the underworld. The horror of this drives Orfeo to despair as he contemplates life without the wife he has new lost twice over.

The furies having taken pity on Orfeo and eventually allowing him to pass, he finds himself in the Elysian Fields, a paradise where he believes everyone is in peace except himself, bereft of his beloved Euridice.

Orfeo, a poet and musician who can enchant wild beasts and move trees and rocks through his music, is mourning the death of his wife Euridice, who died from a snake bite. It’s as much as Orfeo can manage to utter her name as a group of mourners lament her passing. He wants to be alone with his sorrow. Orfeo resolves to claim his departed wife back from the gods.

Amore, the God of Love, appears and offers support, explaining that one of the Gods, Love, has taken pity on Orfeo. He will be allowed into the underworld if he can appease the ‘furies, monsters and cruel death’ with the power of his singing. There he will meet Euridice and be permitted to bring her back to the upper world. The catch is that they must make this journey without Orfeo looking at her and without explaining the prohibition that has been imposed on him. Otherwise he will lose her again. His blood freezes at the thought of her impatience and his own anguish. But he accepts the challenge.

A forbidding netherworld closes in around Orfeo who plays his lyre whilst the Furies mill around him, frightening him and interrupting his music.

A chorus of furies and spectres threaten and obstruct Orfeo as he begins his journey. The sound of his lyre, represented by the harp, and the calm of his voice contrast with the violence of the music which challenges him. The furies take pity on him and eventually allow him to pass.

Orfeo finds himself in the Elysian Fields, a paradise where he believes everyone is in peace except himself, bereft of his beloved Euridice. The chorus announces her arrival and leads Orfeo to her. Without Orfeo ever looking back they finally connect with each other once again.

Orfeo leads Euridice as he grapples with explanations for questions he cannot fully answer without breaching his bargain. The more he hears the less he can resist, as she longs for ‘but one single look’. They both endure extended, incomprehensible torture until he finally yields. He looks at her and loses her again and forever. The horror of this drives him to despair and sparks the opera’s most celebrated aria, ‘Che farò senza Euridice?’ (‘What shall I do without Euridice?’), as he contemplates life without the wife he has lost twice over.

A legendary musician, poet and prophet in ancient Greek religion and myth, Orpheus is credited with composing the Orphic Hymns and the Orphic Argonautica. The major stories about him are centered on his ability to charm all living things and even stones with his music; his attempt to retrieve his wife, Eurydice, from the underworld; and his death at the hands of those who could not hear his divine music. These stories have inspired countless forms of art from antiquity to today, including poetry, film, painting, music and opera. First performed in 1600, Euridice by Jacopo Peri is the earliest surviving opera, and subsequent operatic interpretations include Monteverdi's L'Orfeo, Gluck’s Orfeo ed Euridice and the 2018 opera by Dick van der Harst, Moneim Adwan and Howard Moody, Orfeo & Majnun.

By the mid-18th century, opera seria had developed into meandering works full of complex music, long da capo arias and labyrinthine subplots. Inspired by Francesco Algarotti's Essay on the Opera of 1755 and by French opera of the time, Gluck sought to tackle this trend with an opera of noble simplicity and emotional purity. The result was Orfeo ed Euridice. ‘It’s a reform opera,’ explains conductor Peter Whelan, Artistic Partner of Irish National Opera as well as Artistic Director of the Irish Baroque Orchestra and founding Artistic Director of Ensemble Marsyas.

3° From Vienna to Paris

Orfeo ed Euridice was first performed in Vienna at the Burgtheater in 1762 for the name-day celebrations of the Emperor Francis I, and was revived the following year. But it was in Paris that Gluck and his reform opera were most celebrated. Premiered in 1774 at the second Salle du Palais-Royal, this version, named Orphée et Eurydice, had a French libretto by Pierre-Louis Moline, which was both a translation of and an expansion upon Ranieri de' Calzabigi’s original text. This version of the work also had additional ballet sequences, conforming to the tastes that were prevalent at the time in Paris, and included the long ‘Dance of the Furies’ and the famous ‘Dance of the Blessed Spirits’. The opera was also influential on subsequent German operas, with variations on its plot – an underground rescue-mission in which the hero must control, or conceal, his emotions – to be found in Mozart's The Magic Flute and Wagner's Das Rheingold.

4° Who wears the trousers?

The first person to sing Orfeo in Gluck’s opera was the famous castrato Gaetano Guadagni. French opera almost never used castrati and so for the Paris version of his opera Gluck changed the part to one for high tenor or the so-called haute-contre – the usual voice in French opera for heroic characters. Since the mid-19th century, Orfeo has mostly been sung as a trouser role by contraltos and mezzo-sopranos. ‘There’s two reasons for trouser roles,’ says Sharon Carty, the Irish mezzo-soprano playing Orfeo in this production. ‘One is because the part originally would have been written for a woman – for example, in The Marriage of Figaro, Mozart wrote the part of Cherubino for a soprano, and it would have been accepted at the time that page boys and young men would have been sung by high female voices.’

The other reason, she says, is to replace the many male roles that were written for castrati. ‘Thankfully, we don’t have any castrati around anymore, so you have to resolve it by casting either a mezzo-soprano – as in this production – or a countertenor.’ Having recently played Hänsel in Hänsel und Gretel, Sesto in Giulio Cesare, and the title role of Ariodante, Carty is well used to playing trouser roles. This is her second appearance on OperaVision having created the role of Amy in the world premiere of Donnacha Dennehy and Enda Walsh’s The Second Violinist.

For this production, Irish National Opera teamed up with United Fall, a company led by director and choreographer Emma Martin, whose work blurs the borders between conventional theatre and dance. ‘Emma’s approach to Orfeo ed Euridice has delivered a production of unique taste,’ says Fergus Sheil, Artistic Director of Irish National Opera. ‘She has carefully and honestly balanced the elements of movement, music and virtuosity.’