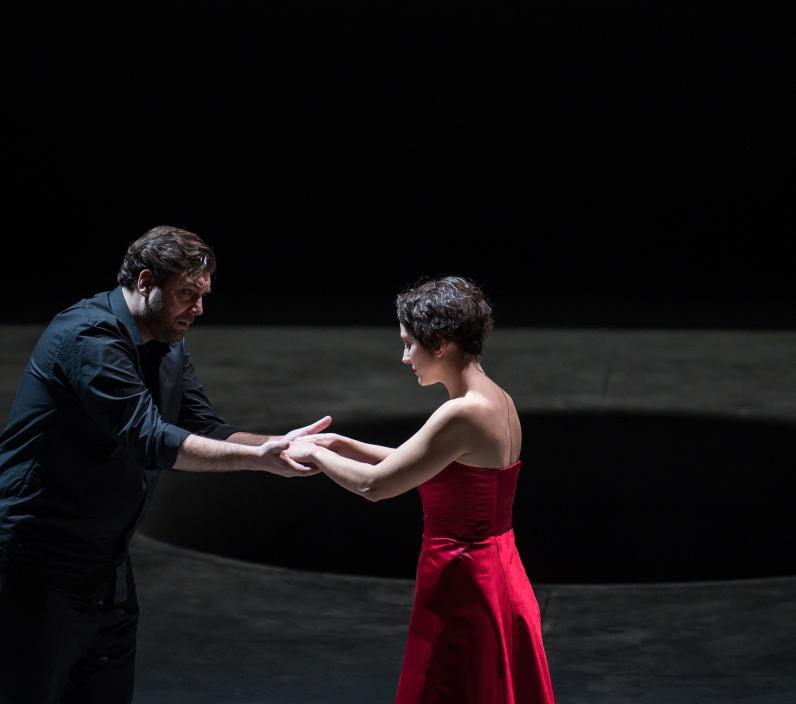 In a kingdom where day is night and noon chills the blood, a prince suspects his mysterious wife to be in love with his half-brother. But where does Mélisande come from? And what do we really know about the two heroes' silent love?

A single opera was all it took for Debussy to transform the history of music forever. Opéra de Lille presents us with a Mélisande full of vitality and determination, far from the familiar ethereal figure. In the pit, François-Xavier Roth and his internationally renowned ensemble Les Siècles, playing on period instruments, lend new colours to a score which we thought we knew.

Pelléas et Mélisande is not a tale of outdated chivalry. It is actually quite the contrary according to Director Daniel Jeanneteau; it sheds light on our anxieties today and our need for freedom which is constrained by society. Maeterlinck’s story set to music by Debussy could not be more in keeping with our times.

What makes Pelléas et Mélisande such a groundbreaking work? François-Xavier Roth – who conducts his period music ensemble Les Siècles in this new production from Lille – shares some insights on Debussy’s unsettling music.

The action takes place in the imaginary kingdom of Allemonde.

ACT I
During a hunt, Prince Golaud, grandson of the old king Arkel, gets lost in the forest. At a fountain he meets Mélisande, a weeping young woman who refuses to explain who she is. She also objects to Golaud retrieving a crown that has fallen into the water.
At the castle, Geneviève, Arkel's daughter-in-law, reads the king Golaud's letter to his half-brother Pelléas. The prince announces that he has married Mélisande, although he still knows nothing about her. Fearing Arkel's reaction, he asks Pelléas to send him a sign if the king agrees to accept his young wife. Arkel agrees, although he would have preferred his grandson to marry Princess Ursula after the death of his first wife. Pelléas appears. Marcellus, a dying friend, calls him to his bedside. But Arkel refuses to see him go, as Golaud is about to return and Pelléas' father is also in agony. Golaud returns to the castle in Melisande's company. During a walk, Geneviève and Mélisande find Pelléas near the sea, just as the boat that had taken the princely couple passes. The sea is calm but a storm is forecast. Geneviève leaves to inquire about little Yniold, born of Golaud's first marriage. Pelléas takes Mélisande home and tells her on the way that he might leave the next day, which affects her.

ACT II
In the park, Pelléas takes Mélisande to see a fountain that is reputed to restore sight to the blind. As the clock strikes noon, Mélisande loses her wedding ring in the water.
Golaud is injured after a fall from his horse at the twelfth stroke of noon. At his bedside, Mélisande confides her uneasiness to her husband. When he takes her hands to comfort her, he notices that the ring is missing. The young woman says she lost it in a cave by the sea. Golaud orders her to go and find it.
Mélisande goes to the cave accompanied by Pelléas. Pelléas advises her to observe the place carefully in order to be able to answer Golaud's questions. They notice three sleeping paupers and flee.

ACT III
Mélisande combs her hair at the window of a castle tower. Pelléas passes under the window and asks to see her hair untied. He tells her he is leaving the next day but Mélisande convinces him to stay. Her long hair falls down to Pelléas, who is ecstatic about it. Golaud surprises them and reprimands them.
The next day, Pelléas and Golaud enter the castle's underground passageway, from which the smell of death emanates. When they emerge at midday, Golaud asks his half-brother to avoid his wife, especially as Mélisande is pregnant.
In the evening, outside the castle, Golaud questions his son Yniold about the nature of the relationship between Pelléas and Mélisande. His jealousy makes him lose his mind, and he orders the boy to spy on the young woman.

ACT IV
Pelléas asks Mélisande to join him that evening near the fountain of the blind. His father having recovered, he prepares to leave.
Arkel tells Mélisande of the pain the atmosphere of death in the castle had caused him, and of the hope that this cure now provides. Golaud appears, mad with jealousy. He bullies Mélisande to the point that Arkel has to intervene.
In the garden, Yniold tries to recover a golden ball that has fallen under a rock. He sees some sheep passing by, which the shepherd prevents from going to the stable.
By the fountain, Pelléas waits for Mélisande, determined to bid her farewell. When she finally appears, Pelléas explains that he must leave because he loves her. Mélisande confesses her love in return and the two lovers kiss. Golaud surprises them. He strikes Pelléas with a fatal blow and goes after Mélisande.

ACT V
At Mélisande's bedside, Golaud is angry at having hurt his wife. The doctor tries to reassure him that the wound is not fatal. When Mélisande wakes up, Golaud asks to be left alone with her. He wants to know if she has been guilty in her love for Pelléas, which she denies. Golaud refuses to believe it and loses his temper. Arkel enters the room and presents Mélisande with the little girl she has given birth to in her sleep. As Golaud tries to talk to her again, the young woman dies. Arkel recommends that the newborn baby be cared for: she must live in her mother's place.

Just one. It only took one opera for Debussy to leave his mark on lyrical art. From its premiere in 1902, the work became an essential part of the repertoire and definitively turned a page in the history of modernity. It did so with a bang, setting off a storm in the arts world of its time. A few days before the premiere, Maeterlinck wrote in Le Figaro that the work would be ‘performed against its will’, wishing it ‘a swift and resounding fall. The censors were indignant that a subsidised theatre should show a child forced to spy on lovers. On the day of the dress rehearsal, a satirical leaflet was distributed outside the Opéra Comique, while in the auditorium, friends and detractors of the composer shouted violently at each other. The same outburst of contradictory opinions did not fail to tear the critics apart. All this agitation could not, however, contrast more with the restraint and refinement of Debussy's music. A music that gives voice to the silence and mystery with which Maeterlinck's text confronts us, underneath apparently simple words, whispered in the maze of thick forests and dark underground passages.

Imbued with symbolist dramaturgy, director Daniel Jeanneteau, in collaboration with Marie-Christine Soma, seeks to maintain the ambivalence of the characters, and particularly that of Mélisande, intact in this production at the Opéra de Lille. At once ‘too human’ and supernatural, she bursts into a family whose paradoxes and clannish functioning she reveals through her presence. By emphasising the desire to escape that inhabits various members of this family, the production reminds us, among other things, of the frustrated aspirations and unfulfilled dreams that remain within each of us. 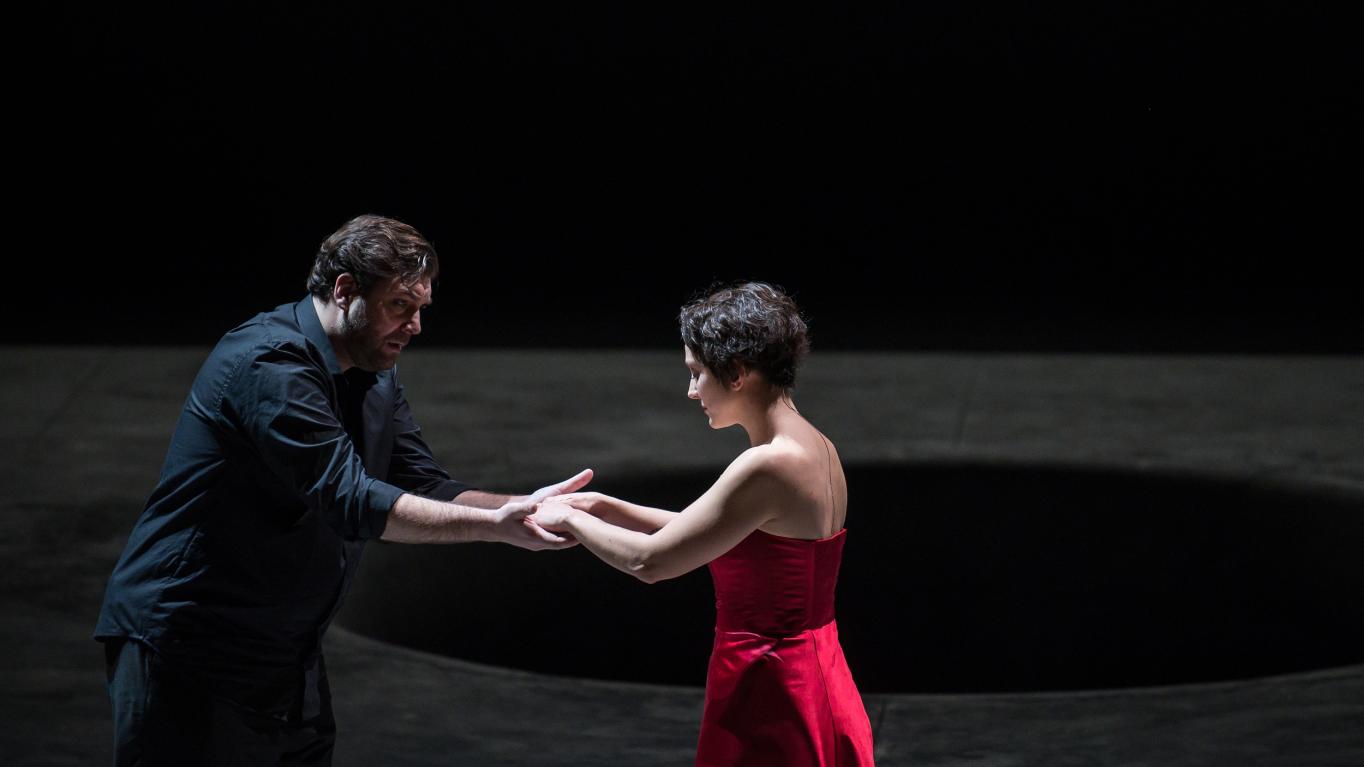 In the words of the stage director:

Beyond the innumerable interpretations to which it has been subjected, Pelléas et Mélisande remains a mysterious work, and does not seem to have delivered all its secrets. With each new approach, the feeling arises that we have to look for more, that, as in the unconscious, something is blocking us from the essential, that prejudices, cultural habits, the desire for the familiar, the seduction of feelings and images are blocking our way. We embark on a troubling quest, consenting to the unspoken part of this dense score, guided by the musical dramaturgy invented by Debussy, full of nuances, transitions and metamorphoses reflecting the elusive character of what appears to be a myth but maybe isn't one.

Another revelation in this new production of Pelléas et Mélisande is that of François-Xavier Roth and his ensemble Les Siècles. Since its formation in 2003, the orchestra has played each repertoire on period instruments, combining rigorous historical research with musical virtuosity. If Les Siècles has gained international recognition, it is in particular through their interpretations of Debussy, who is always very present in their concert programmes. But Pelléas et Mélisande is a first for the ensemble, which completes a long-term exploration of the composer's work, allowing us to appreciate its audacity, timbres and infinite refinements even more.

In the words of the musical director:

We know that Pelléas et Mélisande is a kind of UFO in international opera creation. When he wrote the work, Debussy invented a new way of creating opera, of expressing music. The notion of time becomes completely elastic, the text is told with music that does not seem melodious. The orchestra follows the contours of this text and plays a very Wagnerian role that is completely new in French music: it announces, comments on and even completes in music what the text cannot say. What also moves me is to see to what extent Debussy is the composer of such particular expressive colours: infinite melancholy, wounded and hurt tenderness... As in painting, there is a sort of gradation of emotions in him that is absolutely unique.