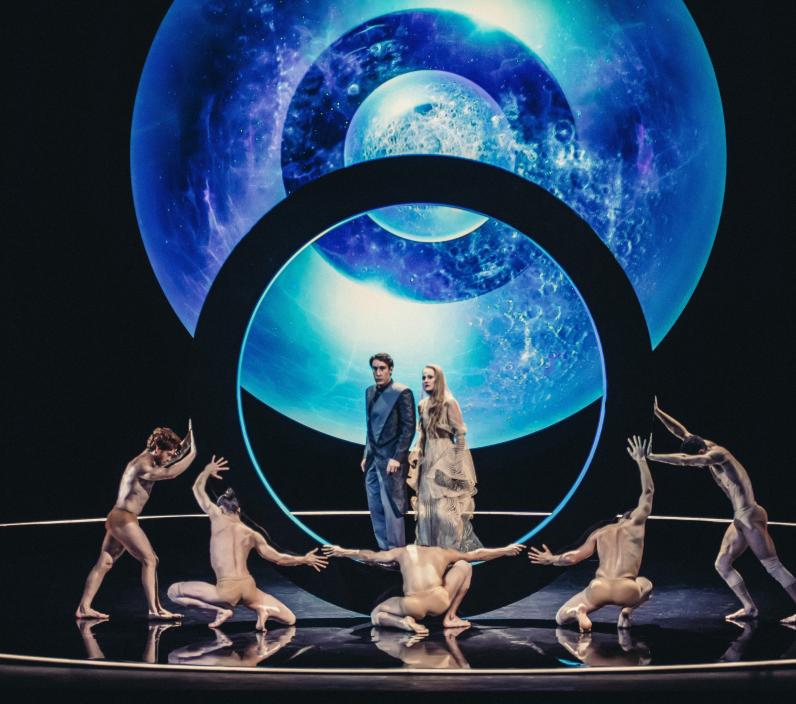 Lost in a forest, a prince meets a mysterious woman and takes her home to a dark castle haunted by repressed longings. There she grows fonder of her new husband's half-brother, sparking a fatal love triangle between the three of them.

In a perfect synergy of the arts, choreographers Sidi Larbi Cherkaoui and Damien Jalet, together with the legendary performance artist Marina Abramovic, stage Pelléas et Mélisande as a cosmic dream. Like Debussy through his impressionistic music, the performers and creators of this production dispense with any illustration and instead bring out the hidden emotions of the characters.

Don’t you know where Ive brought you?

In the first scene of the second act, Pelléas (Jacques Imbrailo) and Mélisande (Mari Eriksmoen) meet at a fountain whose miraculous water opens the eyes of the blind. Mélisande drops Golaud's ring into the fountain.

In a perfect synergy of the arts, choreographers Sidi Larbi Cherkaoui and Damien Jalet, together with the legendary performance artist Marina Abramovic, stage Pelléas et Mélisande as a cosmic dream. Like Debussy through his impressionistic music, the performers and creators of this production dispense with any illustration and instead bring out the hidden emotions of the characters.

An exceptional team gathers to stage a production of this eminently symbolic ‘dramatic opera’ conceived in 2018 at the Opera Vlaanderen in cooperation with the Grand Théâtre de Genève.

The young Norwegian soprano Mari Eriksmoen, who has appeared on great opera stages throughout Europe, plays Mélisande. Jacques Imbrailo, a South African tenor who has already created a sensation as Pelléas in Zurich and Antwerp, returns to the leading role in Geneva. The British baritone Leigh Melrose – who recently played  the role at Ruhrtriennale – portrays Golaud.

Prince Golaud is lost in a forest when he meets a mysterious damsel, weeping by a fountain, who will only tell him that she is fleeing people that hurt her and that her name is Mélisande. Golaud convinces her to follow him.

Months later, and married in the meantime, they come, after a long sea-journey, to Golaud’s homeland Allemonde, where his grandfather King Arkel welcomes them in his dark castle in the forest. Misery and famine reign in Allemonde, but in the castle the essential things are kept under silence. Its inhabitants are prey to trauma and repressed desires.

Only in Pelléas, Golaud’s half-brother, does Mélisande find a kindred spirit, as they both share the awareness that there is more to reality than meets the eye. A strange and bitter love triangle takes form between Mélisande and the two brothers.

1º The composer’s
‘I imagine a kind of drama quite different from Wagner’s, in which music could begin where the words are powerless as an expressive force. Music is made for the inexpressible: I would like it to seem to emerge from the shadows and go back into them from time to time, and should always be discreet.’ (Debussy in 1889). Yet, the composer learned from Wagner the central role of the orchestra and the interlocking network of musical motifs, just as he absorbed the Russian influence of Musorgsky in writing vocal lines based on natural speech patterns. While he admired his distant predecessor Rameau, Debussy reacted against the lyrical and dramatic excesses of late 19th century French and Italian opera.

2º The playwright’s
The Belgian author Maurice Maeterlinck disliked music and composers, saying ‘they’re all insane, all sick in the head’. Although he agreed to meet Debussy, he hoped the opera would be an ‘immediate and resounding disaster’ and was not persuaded to attend a performance of it until 20 years after its premiere. Yet, despite himself, his simple language proved a gift to a composer able to fill in with music what the words did not say. He created a mysterious world which transcends realism. Seemingly innocent and banal phrases hide depths of emotion. It is hard to discover whether the characters are lying to each other or telling the truth.

3º Symbolism
Maeterlinck belonged to the artistic movement known as symbolism which flourished at the end of the 19th century. Poets such as Rimbaud and Mallarmé, painters like Moreau, Khnopff, Klimt and Munch, reacting against realism, preferred evocation and suggestion above description and narrative. Mallarmé wrote: ‘Paint not the object but its effect’. Although these artists influenced composers including Rachmaninov, Schoenberg and, later, Martinů as well as Debussy, the aim of their art was to aspire to communicate the essence of an idea in the manner of music.

4º Impressionism
Debussy’s most famous orchestral scores, Prélude à l’après-midi d’un faune, Nocturnes, La mer, depict nature, not literally but by evoking an impression designed to capture its essence. In that sense, they are often cited as aural equivalents of the paintings of the Impressionists. Debussy himself disliked the label. He objected: ‘I am trying to do something different to what the imbeciles call ‘impressionism’, a term which is as poorly used as possible, particularly by the critics’. When the composer Pierre Boulez conducted a famous production of Pelléas at Covent Garden, he resolutely avoided the wispy performance tradition and insisted on clear-cut chording and musical lines.

5º Interpreters
Boulez drew attention to the frequent juxtaposition of darkness and light in the text, especially in the climactic scene for the two lovers before the murder in Act 4. He also contrasted the assertive character of Golaud, forever seeking to impose a pattern on life, with the passive characters of Pelléas and Arkel, willing to wait for what fate has in store for them. Mélisande lies in between, both a manipulator and a victim. Debussy sought ‘to capture that ‘nothing’ that Mélisande is made of’. She remains the enigmatic heart of the puzzle. The Geneva production illuminates this elusive world with the choreographed movement of Sidi Larbi Cherkaoui and the symbolic installation of Marina Abramović, which together bring new interpretive layers to Debussy’s masterpiece.