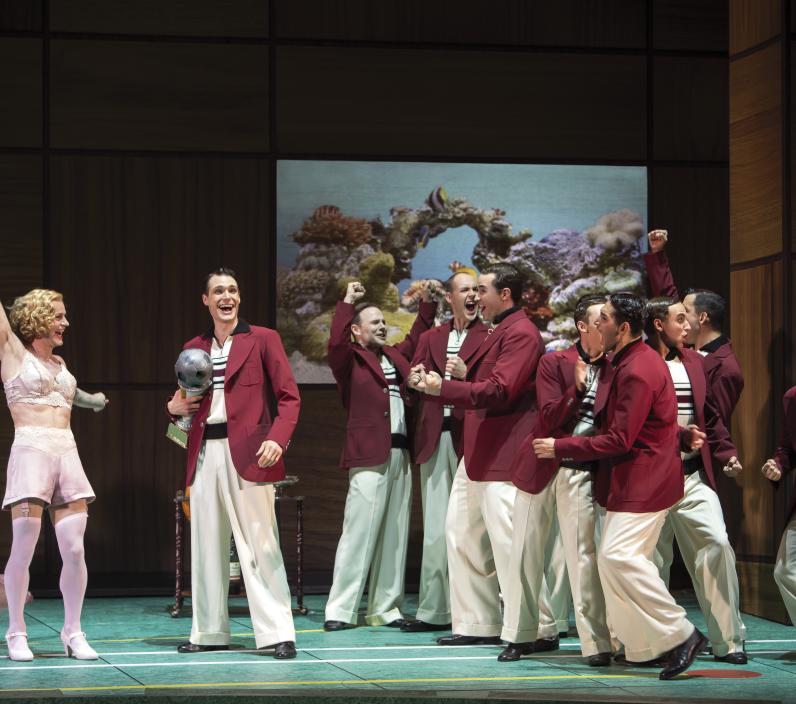 Abraham
This performance is no longer viewable as video-on-demand for rights reasons but other material about the production is still available.

When a smart and confident woman employs the help of a football team to flee from her dim fiancé, the happy distraction threatens the men with sporting and emotional defeat.

From the composer of The Flower of Hawaii and Ball at the Savoy comes this ‘football operetta’, a crazy and turbulent sports satire. Paul Abraham’s fiery music is a cocktail of jazz, puszta and operatic melodies, all rounded off with a shot of stadium chanting. Well-known German music cabaret trio Die Geschwister Pfister take on the three leading roles in this new production at the Komische Oper Berlin.

Sam Cheswick (Uwe Schönbeck) is a penny-pinching Scotsman with a penchant for drinking whisky. He reminds himself that extravagance has always been man’s ruin, and warns the audience to likewise be thrifty with their applause. Conducted by Kai Tietje and directed by Stefan Huber.

Roxy Cheswick (Christoph Marti) has been smuggled aboard the Orient Express by the Hungarian national football team, who are helping her run away from her dull fiancé. As the footballers try to sleep, she and Gjurka Karoly (Tobias Bonn), the team captain, reminisce about the romance of travel. Conducted by Kai Tietje and directed by Stefan Huber.

Opera meets the city and the city meets opera. In the Komische Oper Berlin’s pop-up operas, select scenes from the company’s repertoire are performed in urban locations around the German capital, giving its inhabitants the chance to experience this memorable music up close. So far, more than 350,000 people have been reached through the scheme.

In this video filmed at Berlin’s Central Station, Katharine Mehrling sings Daisy Darlington’s foxtrot ‘Es ist so schön, am Abend bummeln zu geh'n’ (‘It’s so nice to go for an evening stroll’) from Paul Abraham’s operetta Ball at the Savoy. She’s accompanied by Matthias Kamps on the trumpet, Daniel Gatz on the clarinet, Johannes Lamotke on the horn, Sebastian Wagemann on the sousaphone, Ralf Templin on the banjo and Juri Tarasenok on the bajan accordion, and joined by dancers Alessandra Bizzarri, Claudia Greco, Sara Pamploni and Elenora Talamini.

Behind the scenes of Roxy und ihr Wunderteam

Roxy und ihr Wunderteam is a crazy and turbulent sports satire. But the life of its composer was even more turbulent, as music director Kai Tietje and stage director Stefan Huber explain. Also, which member of the Geschwister Pfister always wanted to be a striptease dancer? All will be revealed in this behind-the-scenes documentary!

The Hungarian national football squad under captain Gjurka Karoly are celebrating their victory over the England team in London, when an Englishwoman called Roxy bursts into their hotel room. She is on the run from her dim fiancé Bobby and her uncle Sam Cheswick, a Scottish sauce, ketchup and mixed pickle manufacturer. The footballers, without further ado, stow the runaway bride in their luggage and spirit her away to their training camp in Hungary, overriding the objections of the team captain, who thinks she’ll have a negative effect on training discipline. The jilted fiancé Bobby and Sam Cheswick set off in hot pursuit.

When the Hungarian squad arrive at Lake Balaton, they discover that their country retreat is also being used by boarding school girls and their strict instructor Aranka von Tötössy. Captain Gjurka is not at all happy about having so many females around. But he is quite taken with the self-confident Roxy, though he can’t admit it to himself or to her yet. He ostentatiously stays away from an evening party organised by the footballers and schoolgirls. Quite unexpectedly, Sam and Bobby burst in. To get out of the mess, and to pay Gjurka back for rebuffing her, Roxy announces to her astonished uncle that she’s engaged to be married to the president of the football association, Baron Szatmary, who has just arrived and sportingly plays along with the charade.

Back in Budapest after the boisterous goings-on at Lake Balaton, the boarding school girls find themselves under house arrest. Roxy shares their fate, her uncle wanting to save the cost of a hotel until her wedding with Szatmary. One after the other the footballers arrive at the school in disguise, hoping to impress the girls; another row flares up between Gjurka and Roxy. The girls can only follow the return match against England on the radio. At half-time it’s 1–0 to England. Roxy and the girls break out of detention to cheer on their boys in the stadium. Thanks to their support, the tide turns for the Hungarian team. Amid the joy and jubilation Roxy and Gjurka finally get engaged – as does the whole team. Final score: 3–1 to love!

1. Between stocks and notes

Paul Abraham was born in 1892 in Apatin, today part of Serbia but then part of Kingdom of Hungary. His father was a merchant while his mother encouraged his musical talent and gave him his first piano lessons. Abraham could not decide for a long time whether he should pursue a musical or commercial career, so for a while he followed both paths in parallel. After the First World War, he relied on his commercial talent. He tried to make it as a speculator but lost his stakes during the unceasing inflation of 1924. Due to insolvency, he even had to serve a prison sentence. Legend has it that the idea for Viktoria und ihr Husar came to him in his prison cell.

In 1927, Abraham took up the post of Kapellmeister at the Budapest Operetta Theatre. He contributed to the music of various works and gave the world premiere of his first operetta. Although Der Gatte des Fräuleins was only moderately successful, the work already exhibited the typical characteristics of an Abraham operetta: a mixture of jazz and Hungarian folk music. However, the ironic wink to be found in his later operettas was missing. Three years later, his operetta Viktória was given its premiere in Budapest. In order to be able to bring it to the German market, it not only had to be translated, but also adapted to the sophisticated tastes of the big cities. Viktoria und ihr Husar was celebrated at the Neues Theater in Leipzig and later triumphed at the Metropol-Theater in Berlin, in the building of what is today the Komische Oper Berlin.

Quitting his position in Budapest, Abraham moved with his wife Sarolta Feszelyi to Berlin, the centre of operetta and revue productions. Die Blume von Hawaii followed in 1931, with the premiere taking place at the Neues Theater in Leipzig before heading to the Metropol-Theater. The third operetta in this successful trilogy was Ball im Savoy, which was premiered in 1932 at the Großes Schauspielhaus in Berlin. The three works catapulted Abraham to the top of European entertainment theatre in no time. Only a few weeks after the celebrated premiere of Ball im Savoy, the National Socialists in Berlin took over the government. Little by little, operettas by Jewish authors or composers disappeared from the repertoire – almost all of them.

Abraham first fled to Vienna. In 1934 his Märchen im Grand-Hotel premiered at the Theater an der Wien followed a year-and-a-half later by Dschainah – Das Mädchen aus dem Tanzhaus, but neither was as successful as his earlier works had been in Berlin. So he turned to a topic that the Viennese audience couldn’t resist: football. Vienna was the centre of professional football in Europe in the 1920s and early 1930s. The highlight of Austrian football is the years of the ‘Wunderteam’. The birth of the legendary team is commonly dated to May 1931, when the Austrian players beat favourites Scotland 5-0. The European football world took notice. When the team also gave Germany a 6-0 home defeat a little later, it became clear that this was an exceptional team.

Abraham took his Hungarian operetta 3:1 a szerelem javara, which celebrated the Hungarian water polo team that had surprisingly won gold at the 1936 Olympic Games, and adapted it into a German operetta about football. In March 1937 the world premiere of Roxy und ihr Wunderteam took place at the Theater an der Wien. A review in Der Wiener Tag the next day reported the enthusiastic response: ‘The audience filled the Stadium an der Wien to the last seat and went along with the lively game of the operetta team. The applause was sometimes as loud as it would be during an international football match.’ Roxy was supposed to move with the same cast to the Vienna Volksoper after the 75th performance, but this plan could not be realised because of the tense political situation. Many members of the ensemble had to leave Vienna. Following the Anschluss, Abraham returned briefly to Budapest before fleeing first to Paris and then to Cuba, where he earned a modest living as a pianist. He later emigrated to New York City then to Hamburg, where he died in 1960 at the age of 67. As far as is known, Roxy und ihr Wunderteam was not performed on stage after the opening run in Vienna until the German premiere at Opernhaus Dortmund in 2014.