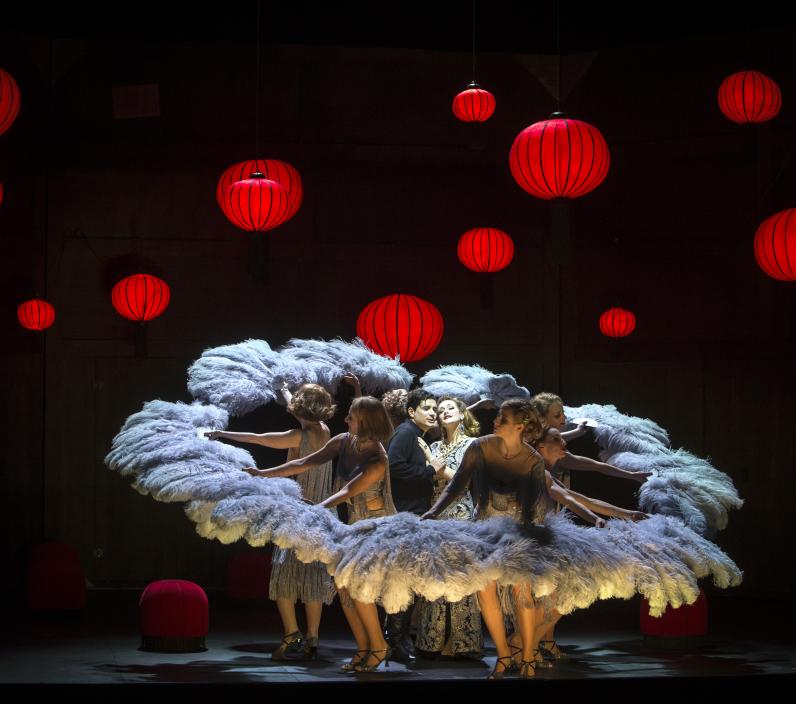 Weinberger
This performance is no longer viewable as video-on-demand for rights reasons but other material about the production is still available.

Part 1. Escaping confinement, the Japanese spy Ito (Tansel Akzeybek) seeks refuge with Lydia Pawlowska (Vera-Lotte Boecker), who hides him from the Russian officers. Ito and Lydia confess their love to each other.  This extract – 'Blau, himmelblau... Traumversunken, liebestrunken' – is conducted by Jordan de Souza and directed by Barrie Kosky.

Part 2. After settling their misunderstandings, Lydia hopes for a future together with Ito (Tansel Akzeybek). Having married in the meantime, he laments the missed chance of true love with the woman he'll be thinking of forever. Conducted by Jordan de Souza and directed by Barrie Kosky.

Behind the scenes of Spring Storms

The stage and lighting designer Klaus Grünberg takes us behind the scenes of the Komische Oper Berlin production of Weinberger’s operetta Spring Storms (Frühlingsstürme). In the slider, discover two other Behind the scenes videos about the operetta's music and staging with the creative team. Enjoy!

At the Russian army’s headquarters in Manchuria, officers are planning an imminent attack on the Japanese enemy. Despite the tense situation, Lydia Pawlowska, a young widow from St. Petersburg, is hosting a ball that evening. The Russian commander-in-chief General Katschalow refuses to accept the invitation due to political circumstances, although he is in actual fact upset that Lydia has rebuffed his advances. His confidant, Colonel Baltischev, head of the military secret service, sees through this. Although he suspects Lydia of espionage due to her prewar connections to a Japanese officer, he himself has set his eyes on her.

Using a false identity, the German war correspondent Roderich Zirbitz has sneaked into Russian headquarters in search of information. However, he is quickly exposed and must fear General Katschalow’s wrath. The general’s daughter Tatjana makes eyes at Roderich. Noticing this, Katschalow puts her under house arrest and forbids her to attend Lydia’s ball.

Lydia herself appears to change the general's mind about attending the ball, succeeding with disarming directness. She recognizes the Japanese Major Ito, the very officer who courted her in St. Petersburg, who is now disguised as a Chinese servant in order to spy at Russian headquarters. Though opposed by the war, their previously stifled passion flares up again.

General Katschalow unwittingly disturbs a conspiratorial meeting between Ito and two other Japanese spies, who end up overwhelming him. Lydia comes back, accompanied by numerous Russian officers, turning the tide. This plunges Lydia into a moral conflict, since Ito and his followers face the death penalty. She suppresses her conflicting feelings and continues to act as a charming hostess. Ignoring her father’s ban, Tatjana sneaks into the ball, where Roderich, disguised as a Chinese magician, continues to make a pass at her. Escaping confinement, Ito seeks refuge with Lydia, who hides him from Colonel Baltischev and his followers. Ito confesses his love to Lydia again.

So as to pass through enemy lines to get his comrades and himself to safety, Ito needs the password. Lydia promises to get hold of it by inviting General Katschalow to an intimate tête-à-tête after the ball. When she tries to coax it out of him, Katschalow gets suspicious and gives her a fake password instead of the correct ‘Spring storms’. Lydia tries to stall Katschalow for as long as possible, but having given the wrong password, Ito is caught. Believing Lydia to be the General’s mistress now, he is furious about her betrayal. Ito is doomed to die. When Katschalow hints that he might let him go if Lydia actually gives in to his overtures, she hesitates and then agrees.

Some time later, everyone meets again at a hotel in San Remo for peace negotiations. Katschalow has fallen out of favour with his superior, Grand Duke Mikhailovich, for releasing Ito. The Japanese Major, on the other hand, has been promoted to the position of colonel and is now his national delegation’s negotiator in San Remo. Meanwhile, Roderich has kidnapped Tatjana from the Swiss boarding school in which her father had placed her. They have also ended up in San Remo, where Tatjana has to hide from her father.

Lydia has come to save Katschalow's reputation. Even though the Russian general proved to be a gentleman by not asking for anything in return for Ito’s liberation, she does not deny the rumours. Katschalow asks for her hand in marriage, which she gives him, much to his surprise. Shortly afterwards, however, she runs into Ito. After settling their misunderstandings, Lydia hopes for a future together with him, turning poor Katschalow down once again. But when Lydia meets a Japanese woman, who turns out to be Ito’s wife Sayuri, she realises that her plans to be with him are impossible. Meanwhile, Roderich and Tatjana have married secretly and ask the enraged Katschalow for his blessing. Lydia mollifies him and finally accepts his offer of marriage. Ito looks after her wistfully before following Sayuri.

5 things to know about Spring Storms

Although fallen into oblivion today, Jaromír Weinberger’s 1933 operetta Spring Storms was set to be a major success in its time. Weinberger had gained international fame with his opera Schwanda the Bagpiper in 1927. After its premiere at the National Theatre Prague, it was performed all around Europe and even as far as New York and Buenos Aires. In the 1929-1930 season, Schwanda was the most played opera on German stages, beating even those of Mozart or Wagner. Spring Storms was Weinberger’s next big work following this success and was met with eager anticipation

The operetta is thoroughly original, both musically and in terms of plot. Setting the story in the midst of the Russo-Japanese War in Manchuria in 1904-1905, less than 30 years after the gruesome events, was a particularly bold statement by librettist Gustav Beer given the recent occupation of the region by the Japanese.

Spring Storms premiered in the Admiralspalast in Berlin on 20 January 1933, almost at the same time as Paul Abraham‘s hit operetta Ball at the Savoy, and starred some of the era’s most popular singers. Richard Tauber, perhaps the most famous opera tenor at the time, played Ito, the Japanese spy, while the celebrated Czech soprano Jarmila Novotná starred as the young widow Lydia Pawlowska. Novotná had just completed playing the title role in Max Ophuls’s 1932 film version of Smetana’s The Bartered Bride, the first opera sound film ever produced. At its premiere, selected musical numbers from Spring Storms were already available on gramophone records.

And yet, the curtain soon fell on Weinberger’s operetta. It played on the night Adolf Hitler was sworn in as Chancellor, then on the night of the Reichstag fire, and just two weeks later it saw its last performance. Tauber, Oskar Homolka, who played General Katschalow, and the other Jewish cast members soon left Germany and Europe, as did Weinberger and Beer.

Remarkably, the role of General Katschalow is a speaking part. Would it have been written that way specifically for the famous Austrian actor Oskar Homolka, who later had a Hollywood career and was nominated for an Academy Award?

Barrie Kosky, the director of this production, speculates that the more likely reason is that Spring Storms’s musical landscape follows the ‘typical operetta template with the buffo couple Roderich-Tatjana and the romantic couple Ito-Lydia so clearly, that neither Weinberger nor Gustav Beer wanted to interfere into these musical languages by adding another singing leading role.’

The original full score as well as most orchestral parts are lost. Only the piano reduction, the bass drum part and a detailed prompt book with the libretto remained unscathed. The pianist and arranger Norbert Biermann used these as well as the gramophone recordings to reconstruct the missing orchestration and compose new extracts for the Komische Oper Berlin’s production. This additional material includes an interlude to the second part after the break and a new quartet for the four main roles towards the end. Biermann also changed Tatjana’s number ‘Geliebter, hör das Lied’, originally sung accompanied by a choir, to a duet with Lydia, and inserted instrumental extensions for choreographies.

Ever since Sidney Jones’s The Geisha (1896), operetta has indulged in orientalism à la Madama Butterfly. Franz Lehár’s The Land of Smiles (1929) clearly served as a source of inspiration for Spring Storms. Though here again, Spring Storms does not follow the expected pattern. Director Barrie Kosky points out that ‘it takes place in Chinese Manchuria, albeit in Russian headquarters and not in a temple. That's interesting: a Jewish-Czech composer writes a German operetta set in Manchuria with Russian generals and Japanese spies who dress up as Chinese. I think it's a fantastically complicated cultural artefact.’