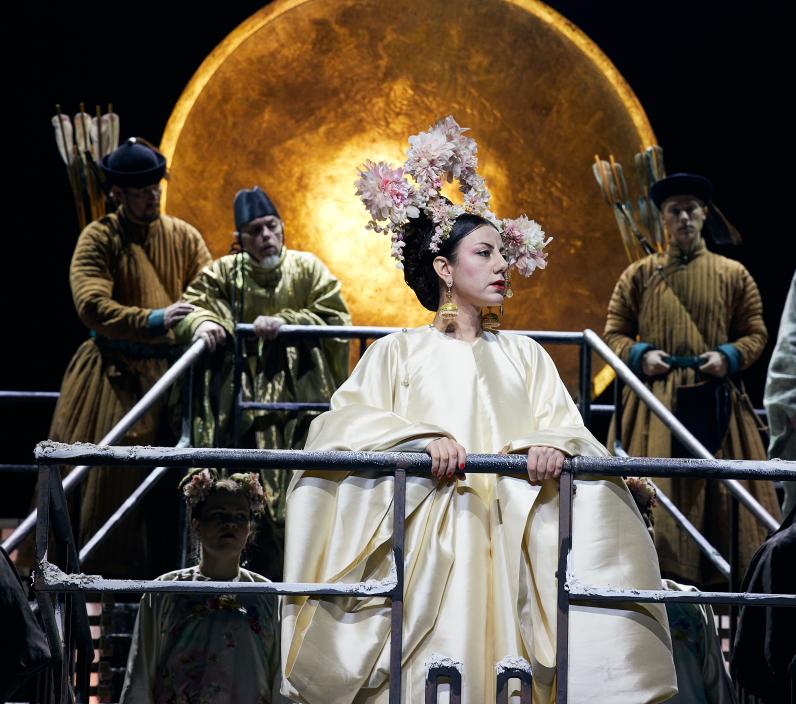 A beautiful Chinese princess has issued a decree for her suitors: whoever cannot solve her riddles to win her hand will be beheaded.  As unlucky suitors fail and fall, up steps Calaf, a prince of the Tatar people.

The new, visually stunning version of Puccini’s Turandot at the Finnish National Opera delivers a universal message: regardless of who we are or where we come from, we are all looking for love. Director Sofia Jupither sets out to focus on the essence of Puccini’s interest in private and the public lives, power and responsibility, love and vulnerability. Puccini composed the opera in the heyday of exoticism and orientalism; an Europe-centric view of the Far East is in danger of distancing modern audiences from Puccini’s masterpiece. As Jupither describes in the interview below, her ambition is to pull down decades-old stereotypes embedded in the work and show the people beneath them, revealing the central themes of the opera, the psychology of the characters and a story of our society today.

Turandot, daughter to the Emperor, has decreed she will only marry a Suitor who solves her Three Riddles. If the Suitor fails — off with his head!  The Prince of Persia has just failed; the court prepare him for sacrifice; the gladiators pump the crowd; the crowd roars for blood. An old blind man is trampled in their hysteria. His faithful caretaker, Liù, pleads for help. A young man, Calaf, leaps to the elder, only to discover Timur, his long lost —  and exiled — Father. The main event arrives: Turandot descends and beheads her failed Suitor. Calaf’s first glimpse of Turandot magnetizes him: he must have her. When the spectacle ends and the crowd clears, Timur and Liù try to convince Calaf to flee with them. But Calaf is crazy in love with the idea of Turandot. None will stop him. Turandot’s Three Ministers, Ping, Pang and Pong — the three Eunuchs who run this too-long-running show of riddles and blood-games — try to dissuade Calaf from pursuing Turandot. But their intended efforts only heighten Calaf’s will to win.

Ping, Pang and Pong share a picnic off-duty.  They drink heavily and lament their servitude  to Turandot’s bloodlust; they lament the lives  they might have once had in some other sweet imagined home. Will they ever be free? The trumpets sound: duty calls them back to produce Calaf as the next Suitor in Turandot’s Riddle Games. The crowd arrive, hungry for another spectacle of gladiators and blood. The powers that be process and present the Emperor. He, too, wishes his daughter’s trail of blood would end. The golden bride-prize, Turandot, arrives.  She tells the Suitor of her numb heart’s will to stop the lineage of trauma inflicted by men on her female ancestors — mental, physical abuse, rape and murder. No man will claim Turandot like that. Miraculously, Calaf solves the first riddle, the second … the third. The crowd goes wild, the Bride and Groom are quickly prepared for the wedding. Trembling in her wedding dress, Turandot pleads with her father to not force this marriage. Seeing and hearing her pain once more, Calaf extends  a shocking, gentle gesture to his prize, Turandot;  a riddle of his own. “If before morning you can discover the name I bear, I shall forfeit my life.”

The entire city hunts all night to find Calaf’s name. Calaf remains alone inside the ritual space, determined that dawn will deliver Turandot to  his arms. Ping, Pang and Pong offer Calaf any price in return for his name: women, jewels, safe escape; but Calaf will have none. He returns to the altar to receive Turandot’s answer to his riddle, but instead sees Timur and Liù taken prisoner. Turandot believes torture will reveal the truth she seeks. Instead, Liù chooses to take her own life. Timur follows suit. Turandot is shaken by the depth of Liù’s love for Calaf, and her own cruelty which led to an innocent women’s death — like the very men she detested. Calaf reproaches Turandot who still tries to avoid her fate of marriage. Calaf leads her on a final unexpected journey. In an act of sublime gentility and understanding, Calaf offers Turandot the metaphoric sacrifice she needed  to see from one man to open her heart. Turandot and Calaf embrace. The Emperor is finally free to pass — the new Emperor and Empress appear before their people.

‘Beneath the layers, there is a contemporary story of our society’

Puccini worked meticulously on his last opera, Turandot. Yet he failed to finish the final pages and the world premiere took place in Milan in 1926 after his death. In the spirit of his time, Puccini’s work was awash with oriental influences. The character of Turandot and the history of the work have multiple layers. As we pull down decades-old stereotypes embedded in the work and reveal the people beneath them, the central themes of the opera come to include both the psychology of the characters and a story of our society.

Along with the fantastic music, the layers of the opera reveal themes of private and public life, power and responsibility, love and vulnerability. As in many of his other works from Tosca to Madama Butterfly, the composer introduces characters who are trapped by their identity. Like Tosca, Turandot is forced to adhere to a certain public image constrained by traditions and pressures from other people. Both characters must bear the constant weight of a role in which they are not content.

The story of Turandot applies to all of us: it makes us think about who and what we are expected to be in our society. People often want to force each other into compartments and only see others through their own preconceptions. I look at Turandot as an object of oppression by power structures: her public life as a princess is only a front that she is forced to uphold. Like other princesses before her, Turandot feels the pressures and expectations of man. I want to set Turandot free of these external demands.

The other central roles in Turandot are interesting, such as Timur, Calaf and Liù with their multifaceted interrelations. The emperor’s ministers Ping, Pang and Pong are fascinating characters; I have approached them as I have Turandot, aiming to discover the individuals behind the masks. Who is it that they really are? Why have they ended up in their position? In my eyes, they resemble Turandot very much. They must also play their official roles, but in reality they are longing for something else.

Turandot is a genuinely choral opera, for which Puccini has composed his perhaps most impressive choral music. The chorus’ role is psychologically significant. Its purpose is to tell the story of how individuals become part of a larger crowd, a blood-thirsty nation of the opera. Think of the execution scene early on, in which people revel in the brutality of a public execution. When the crowd sees the helpless Prince of Persia awaiting his fate, it softens. Here the chorus tells a merciless story of the way our society works. When people who are strangers to us - ‘others’ who are elsewhere - we are untouched by the most hideous of cruelties. But when we face those people as individuals in front of our very eyes, we soften. Such are the dangers of failing to understand that we are all individuals.

Traditionally, Turandot has featured dated gender roles, misogyny and racist stereotypes. It is particularly important for the future of opera that these problematic themes are discussed, as that is the way towards change. Together with the creative team, we have aimed to remove all the dated layers of the performance tradition from our production; our humble attempt to make jewels of operatic history viable in the modern day.

Based on an interview by Petra Rönkä