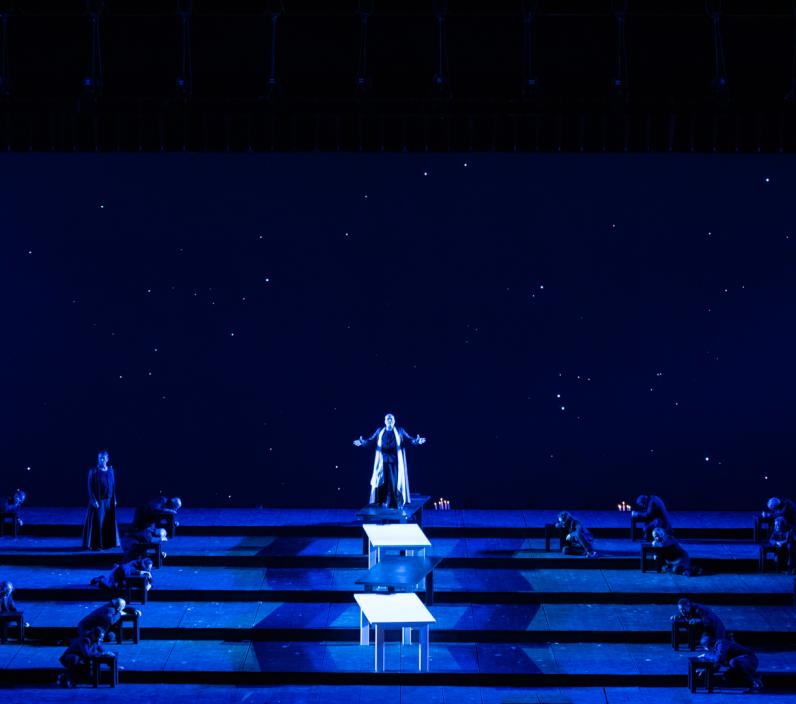 Il trovatore: an opera of the night

The operas of Verdi are individually recognisable by their distinctive colour or tinta. Il trovatore belongs to the night, its prevailing colour midnight blue irradiated from time to time by the flame red of the fire which is its recurring motif.

The paradox of Trovatore is that a story of almost unrelieved darkness is suffused by music of soaring lyricism. It is a lazy critical cliché to repeat Caruso’s maxim that ‘all Trovatore needs is the four greatest singers in the world’, implying that the plot is so far-fetched and ludicrous that it is best ignored. The opposite is true. The dramatic themes of Trovatore are elemental in their power: the magnetic attraction in love and hate of long-lost brothers; the mother who destroys the child most dear to her; the defenceless woman who summons the strength to sacrifice herself for love. The text which Verdi wrung from his experienced librettist Salvatore Cammarano is a skilfully constructed scaffolding which allows the music to provide the drama unimpeded. It is the perfect libretto, because when filled with music it becomes invisible.

Trovatore is the last of Verdi’s operas to be confined by the closed forms of traditional ottocento opera. These forms are themselves bound within the carefully balanced formal pattern of the opera, which although nominally in four acts is actually a two-act structure. It is modelled on that of Don Giovanni, an opera which Verdi had remorselessly drummed into him by his teacher Lavigna until he knew it by heart. In each ‘half’ there are four scenes. In both cases, the first scene, driven by the narrator Ferrando, explains the background and starts the motor of the story. The second scene is a predominantly lyrical interlude rounded off with a furious headlong final section. The third scene of each part is the longest and most developed and forms the musical and dramatic highest point: in part one the extended scena between Azucena and Manrico in which their mutually dependent past is explored; in part two the great scene of Leonora’s decision built round the central Miserere section. The final scene of each ‘half’ is by comparison terse, with foreshortened events and a brutal conclusion.

The four main roles respond to fine singers, because Verdi has imagined their emotions so precisely and fully. The Count of Luna should not be portrayed as a black-hearted snarling baritone, because his music reveals great tenderness and mood swings between aggression and self-doubt. Manrico is not just a macho warrior with a trumpet top, but a poet and troubadour, reticent and elusive enough to sing two of his arias off-stage. Leonora’s progression from star-struck victim towards the catalyst who decides the fates of both brothers is the most astonishing transformation of all. Yet it is Azucena, despite appearing in only three of the eight scenes, who haunts the shadows of the opera and is its more memorable creation.

Gabriele Baldini went so far as to relate Azucena to ‘the unattained ideal of King Lear’, the subject which obsessed Verdi but which he never treated. ‘Her greatness derives from her feeling of being torn between emotion and destiny, birth and death (or rather flowering and decay), by a blind, irrational game in an indistinct circle of madness… Azucena is an opening within which we can cast a frightened glimpse at something lying at the roots of our origins. It is important that Manrico is unsure whether he is really her son; that Azucena continually contradicts herself on this matter; that she feels like a projection of another mother, of another gypsy who found herself in a similar situation on which must now be placed the seal of revenge; but it is above all important that whoever hears this dazzlingly clear music continually superimposes one character on another, and never separates their individual moulds… In this sense I believe Il trovatore is Verdi’s highest point.’

The composition of Trovatore came at a low personal point for Verdi, because it coincided with the death of his mother. Verdi scrupulously expunged autobiography from his work, but it is clear that certain themes had an especially strong resonance for him. One thinks of the bond between father and estranged daughter from Nabucco through Giovanna d’Arco to Rigoletto and Aida, and, above all, of the rediscovery of the long-lost daughter in Simon Boccanegra. In Trovatore it is a mother’s search for her son, and a son’s for his mother, and the conclusion is unforgivingly bleak. After the première Verdi wrote to a friend: ‘They say that this opera is too sad and that there are too many deaths. But finally, in life all is death! What else exists?’

Some claim that the supreme achievements of Trovatore are Act II Scene 1 and Act IV Scene 1, the sections with the strongest narrative and musical development.  Even more extraordinary are the compact final sections of each half. In the first, Manrico’s magical rescue of Leonora gives rise to her all-embracing phrase ‘Sei tu dal ciel disceso, o in ciel son io con te’ – ‘Have you come down from heaven, or am I in heaven with you?’ – which gathers the collected feelings of the whole company within a single glorious span. In the second, the imprisoned Manrico and Azucena are joined first by the dying Leonora and then by the betrayed Luna to form a quartet of incomparable funereal desolation, in which their four lonely souls are laid bare before, in the final seconds, Azucena hits Luna with her last climactic revelation. This is devastating music, but also existential drama.