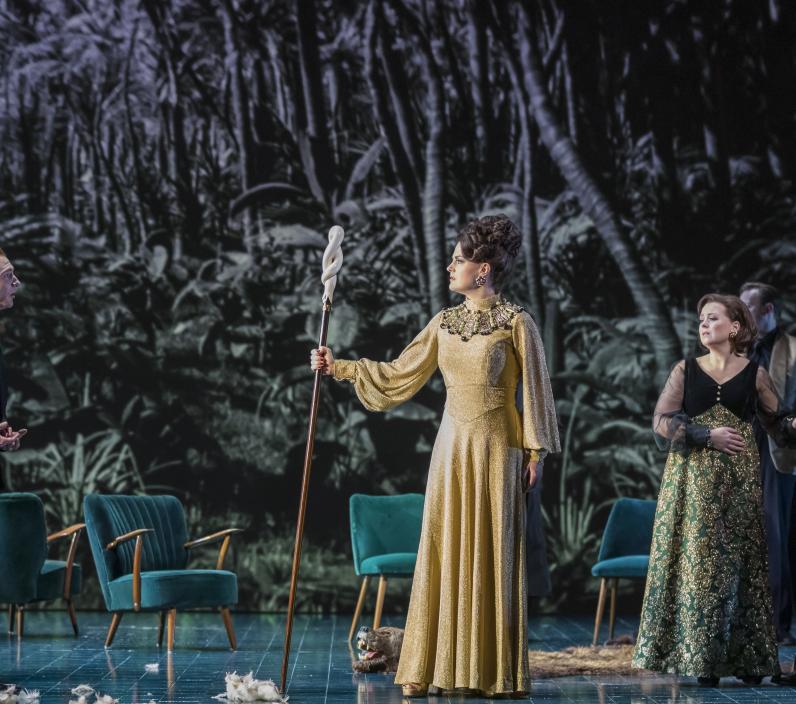 Händel
This performance is no longer viewable as video-on-demand for rights reasons but other material about the production is still available.
Sung in
Italian
Subtitles in
English

Told with some of Handel’s most delightful music, Alcina is the story of an enchantress who uses her magical powers to bewitch the young knight Ruggiero and keep him captive on her island.

On Alcina’s island nothing is as it seems. Alcina (soprano Máire Flavin) is an enchantress who transforms her discarded lovers into non-human form, and her island is a barren wasteland whose apparent beauty is maintained only by her powers of illusion. When Bradamante (mezzo-soprano Mari Askvik) arrives on the island in disguise intent on reclaiming her fiance Ruggiero (countertenor Patrick Terry), Alcina’s magic is tested to breaking point.

Directed by Tim Albery, Opera North’s new production challenges the historical conventions of women playing male roles and plays with gender fluidity. Designer Hannah Clark has stepped up to a different, environmental challenge; to make a production in which nothing that appears on stage is newly purchased. Baroque specialist Laurence Cummings conducts Handel’s wondrous music, overseeing the proceedings in this troubled (but sustainable) island paradise.

We arrive on Alcina’s island with Ruggiero, a kidnapped knight who has been stolen from his fiancée Bradamante. On this island live Alcina and Morgana, two deadly sorceresses who are known for their seductive powers and magic.

Bradamante arrives on the island, searching for Ruggiero with his former tutor, Melissa. Dressed in armour, Bradamante impersonates her brother Ricciardo.

Morgana meets the two new island guests and immediately sets her sights on ‘Ricciardo’, abandoning her current lover Oronte. She takes them to Alcina’s court, where Bradamante is horrified to learn Ruggiero is besotted with Alcina and doesn’t remember his former life with her.

In a jealous rage, Oronte challenges ‘Ricciardo’ to a duel before being broken up by Morgana. Oronte takes his fury out on Ruggiero, revealing exactly how Alcina treats her former lovers.

Alcina plans to turn Ricciardo into an animal to prove her love to Ruggiero. Morgana begs her not to.

Melissa gives a magic ring to Ruggiero, which cuts through the illusions of Alcina’s magic. He is disgusted by what he sees – a desert, populated with monsters. He realises he must run away but is afraid of Alcina’s revenge.

‘Ricciardo’ reveals herself as Bradamante, but Ruggiero believes her to be just another one of Alcina’s illusions. Convinced of Ruggiero’s indifference, both Alcina and Bradamante despair.

Alcina enters to transform ‘Ricciardo’ into an animal, but Ruggiero quickly tries to convince her not to. In this moment, Alcina reveals her true and genuine love for Ruggiero.

Morgana and Alcina realise they are being deceived, but it is too late. Alcina’s power depends on illusion and belief and as her true love is revealed, her magical powers slip away…

​​Ruggiero destroys the source of Alcina’s magic and the island is both demolished and restored. Animals, rocks and plants all transform back into their human bodies.

Alcina and Morgana are forgotten.

In the midst of Handel’s enchantments

The main musical event of an opera by Handel is the solo da capo aria, in which an A section is followed by a contrasting B section which is in turn followed by a repeat of the A section, but now with added ornamentations designed to display the vocal athleticism of the singer. In the recitatives, time is compressed and the plot rattles by in a manner that can teeter on the perfunctory. In the arias, time is expanded, giving space for each character to explore their situation in music of scintillating brilliance or ravishing beauty, set to just a few lines of text. Whilst the plot-making in a Handel opera might not seem as smooth to modern sensibilities as it is in an opera by Puccini for example, the more abstracted nature of a Handel plot opens up more imaginative space for singers, musicians, directors – and for audiences. The purpose of the plot in a Handel opera is to manoeuvre the characters into situations of such emotional and psychological pressure that song is the only possible means of release, and through the music the text is explored angrily, despairingly, meditatively, joyfully, brokenly – whatever the situation demands.

'It’s a super-stressing of emotion. In that sense Handel is not dissimilar to Puccini. It’s just that the toothpaste is not spread so evenly through the tube, as it were. The emotion pours out in an aria, the plot is squeezed forward in the recitative, and then the emotion pours out again in the next aria. So whilst the emotion may not be as evenly spread through the dramatic structure as it is in an opera by Puccini, it’s just as intense.'
Laurence Cummings, conductor

The Opera North production sets out to distil the piece to the essential human drama that is at its core. At the outset, Alcina and her circle exist in a state of satiated contentment, untroubled by life’s quotidian worries. Alcina indulges herself with whomever she pleases until she is bored of them, at which point they are discarded and turned into stones or trees or beasts. The arrival of Bradamante and Melissa disrupts the equilibrium and is the catalyst for an inexorable descent into chaos and confusion and, ultimately, self-realisation. So whilst the narrative trajectory of the libretto is honoured, the elements of magic in the original become largely metaphorical in this telling of the tale. It is emotion rather than magic that turns someone to stone or into a wild beast.

Designer Hannah Clark shares the conviction that Handel’s operas are fundamentally about people and their relationships. ‘Spectacle is lovely in certain contexts’ she says, ‘but it isn’t always strictly necessary’. Her designs for this production have been created within a framework of environmental sustainability. All the scenic elements, furniture, fabrics and costumes, are vintage, second-hand or repurposed, and a starting point for the design was the stage of the theatre itself and all of its equipment – the lighting rig and so on. Like Alcina’s island, the theatre can be a place of enchantment and seduction in which visions can be conjured up and as quickly disappear – and where nothing is as it seems. The design also references night-time places such as nightclubs and cocktail lounges – seductive spaces which project the illusion of glamour but which might look very different in the cold light of the morning after. Key to the story-telling is Alcina’s possession of a certain kind of seductive glamour, and the deconstruction of that glamour.

'Because we knew we were going to have to shop vintage we asked ourselves, ‘What kind of vintage can we buy that’s glamorous and interesting?’, which led us to the Fifties and Sixties. So to some extent Alcina and Morgana are of that era, but only in as much as is useful for the development of their characters.'
Hannah Clark, designer

Text adapted from an article by Stuart Leeks