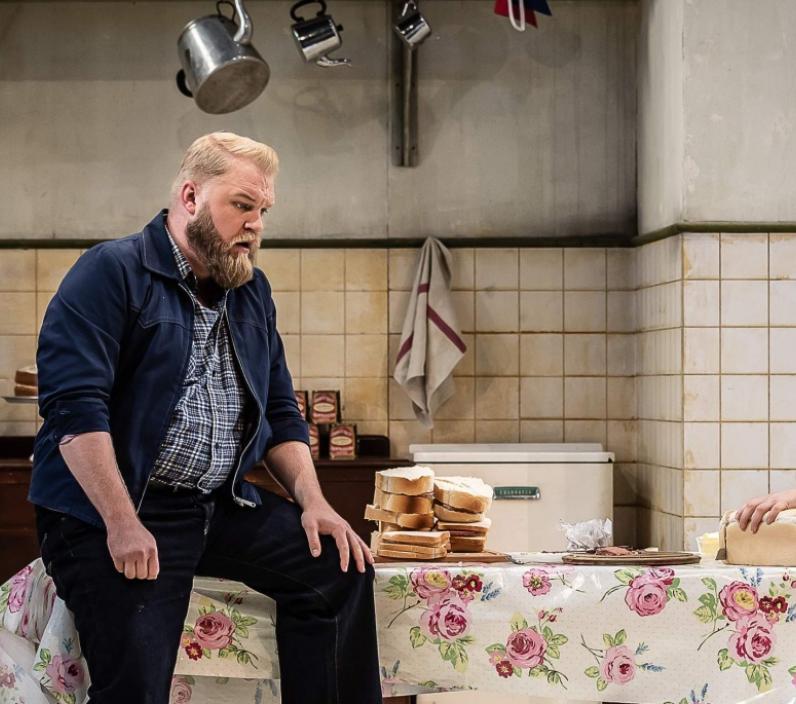 Smetana
This performance is no longer viewable as video-on-demand for rights reasons but other material about the production is still available.

When a spirited peasant girl is promised to a stranger, she uses every last ounce of cunning and charm to thwart her parents’ plans and get the man she actually loves.

From the vibrant overture to the riotous polka, Smetana places dance at the heart of his sparkling work. This festive celebration of Czech culture and identity is reimagined into the heart of the English countryside with this new production at Garsington Opera.

Act II. At the village pub, Jeník (Brenden Gunnell) and Kecal (Joshua Bloom) engage in a bout of jovial arguing on the respective merits of money, love and beer. Conducted by Jac van Steen and directed by Paul Curran.

Dance of the Comedians

Act III. A travelling circus has come to town. The circus master (Jeffrey Lloyd-Roberts) introduces the star of the show, Esmeralda (Lara Marie Müller), along with the other performers (Daniel Edwards, Joshua Frazer, Ludo Helin, Malik Ibheis, Anesta Mathurin and Jennifer Robinson) as the orchestra accompanies them with a Skočná. Conducted by Jac van Steen and directed by Paul Curran.

Act III: Mařenka (Natalya Romaniw) believes that her love, Jeník, has betrayed her by selling the rights to marry her to another person. Left alone to consider her options, she laments the fact that her dream of a long and happy life with him seems to be over. Conducted by Jac van Steen and directed by Paul Curran.

In this interview, the singers Natalya Romaniw, Brenden Gunnell & Stuart Jackson share their thoughts on the characters they play in this production of Smetana's The Bartered Bride at Garsington Opera.

Soprano Lara Marie Müller and circus captain Jen Robinson talk about their roles in the circus that appears in Act III of The Bartered Bride.

Behind the scenes of The Bartered Bride

Take a look behind the scenes at Garsington Opera as the creative team prepare their new production of Smetana's The Bartered Bride. Featuring interviews with director Paul Curran, designer Kevin Knight and conductor Jac van Steen.

Mařenka has fallen in love with a young man, Jeník, a stranger to her village. Driven away from his family home at an early age by his jealous stepmother, Jeník was forced to join the army and is now, some years later, working as a farmhand. Mařenka’s father, Krušina, owes a substantial sum of money to a man called Tobiáš Mícha. The local mayor, Kecal, has negotiated an agreement whereby the debt will be cancelled if Krušina agrees to the marriage of his daughter with Tobiáš Mícha’s son.

The villagers are preparing to celebrate a national holiday. Mařenka has just learnt of the imminent arrival of Vašek, the man her father wants her to marry. She is determined to refuse him and marry Jeník.

Kecal reminds Mařenka’s parents, Krušina and Ludmila, of the arrangement made with Tobiaš Mícha, insisting that the marriage should go ahead, even though no one has yet met the proposed bridegroom. Ludmila wants Mařenka to be able to make her own choice. Kecal attempts to secure Mařenka’s agreement to the marriage but she is not to be persuaded.

Mařenka comes across the bewildered, timid Vašek. Without revealing who she is, she manages to paint such a terrifying picture of Mařenka, his intended bride, that he swears he will never marry her.

Kecal tries to tempt Jenik to give up Mařenka by offering him another marriage prospect. As he listens to Kecal, Jeník notes that the husband proposed for Mařenka is stipulated as being ‘the son of Tobiaš Mícha’. Spotting a loophole, he agrees to renounce Mařenka in return for a cash lump sum but only on the condition that she does indeed marry the son of Tobiaš Mícha and that Krušina is freed of his debt.

Once he is alone, Jeník reaffirms his love for Mařenka. However, when Kecal returns with a group of villagers as witnesses, he rejects her publicly in return for the money. The villagers are shocked by his callous and mercenary attitude.

Vašek is still worried about the woman that his parents want him to marry but he is distracted by the arrival of a travelling circus troupe. He becomes entranced by their star performer, Esmeralda. When the circus manager learns that the performer who normally plays the dancing bear is too drunk to be entrusted with the role, he and Esmeralda persuade Vašek to take his place.

Mícha and his wife Háta come with Kecal to make the final arrangements for the marriage and are outraged by Vašek’s refusal to proceed. When Mařenka and her parents arrive, she is forced to confront the fact that Jeník has sold her. Distraught, she asks to be given a little time to think. Her anger increases when Jeník refuses to deny his involvement in the transaction.

When the villagers arrive to hear Mařenka’s decision, Jeník reveals his identity as the eldest son of Tobiaš Mícha, claiming his bride under the strict terms of the contract. Kecal has been outwitted and the villagers turn against him for his bullying and manipulative behaviour.

Reconciled with his son, Mícha gives his blessing to the marriage of Mařenka and Jeník.

The universality of The Bartered Bride

The Bartered Bride has come to be regarded as an opera that embodies a sort of ultimate Czech-ness. The writer Henrietta Bredin asks conductor Jac van Steen and director Paul Curran if that is a notion that has to be addressed, even circumvented, before presenting the work on stage.

Paul Curran tackles this without hesitation: ‘That’s really like saying that Eugene Onegin is only about being Russian or that Hedda Gabler is exclusively and overwhelmingly Norwegian. These stories are universal. The element that makes people think of The Bartered Bride as being so very specifically Czech is the national dances that Smetana composed for it. They run through the piece but each one has a distinctive character – they’re not sentimental and sweet. There’s a clear reason within the drama why one of them, for example, is called a ‘Furiant’, and we’re going to work on integrating those dances into the dramatic structure of the opera.’

Jac van Steen agrees. ‘The music for the dances is really skilfully written. I spent about 25 years of my career as a music director in a German opera house and Die verkaufte Braut – The Bartered Bride – was treated, for 99 performances out of 100, as just a light-hearted comedy about a girl, a young man and a foolish boy. I never conducted it for that reason because it didn’t seem to fit with the sort of repertoire that interested me. Then about six years ago I started to work in the Czech Republic and I discovered what enormous pride people had in this work. I’ve been studying this score for nearly two years now.’

‘We’re making the whole dance element something that is a focus for a community,’ says Curran. ‘The opera is about a small village society, where people are suspicious of strangers and where the arrival of a travelling circus is something really exciting. It immediately enlivens the mundane, the day-to-day, by bringing a touch of exotica. It may be slightly cheap, tatty exotica, but it’s different, and it’s fun.’

‘And,’ explains van Steen, ‘it comes as a contrast to the romance between Mařenka and Jeník, the soprano and the tenor. Their roles are extremely challenging because, like most Czech music, it all sounds very simple and natural but you need enormous stamina to perform it. The accents that Smetana writes in his score are clearly connected to the text – this is one of the reasons I am so happy that we are performing this in the original language. The words and the sound of the music combined are almost onomatopoeic, it’s as if you can taste the sound of the words and comprehend them.’

Curran points out that the characters are very well drawn: ‘Mařenka is neither a ditzy romantic nor a scheming bitch – she’s a strong, capable young woman who is deeply offended and hurt that she is being sold off by a marriage broker in this outrageous fashion. And her mother is interesting as well: in a way, she’s the key to the whole thing, making it essentially a feminist piece. You expect her to say that her daughter will have to do what she’s told but in fact she says, “This is what we did in my day but you don’t have to do that. It’s your decision.”’

‘Smetana juggles with the psychology of the characters,’ adds van Steen. ‘He gives them his version of a Wagnerian leitmotif. The marriage broker, Kecal, who is part villain, part comic, often has a bassoon as accompaniment, bringing exactly that combination of colours. And if Mařenka sings the word ‘love’ or ‘faith’, she is often accompanied by two clarinets. But then, the moment that she refuses to follow her father’s decisions, Smetana adds the harsher sound of the oboes. The full orchestra is used for the overture and the dances but otherwise Smetana uses particular combinations of instruments as and when he needs them. My challenge will be to get the brilliant players in the Philharmonia to be both completely free, in the Czech Romantic style, and immensely precise in their way of performing. “Flexibility between the bar lines” will be my motto.’

‘And’, says Curran, ‘my challenge – among others – is to get these fabulous singers acting, singing and dancing all at once!’

Henrietta Bredin is deputy editor of Opera magazine and writes widely on opera and theatre.