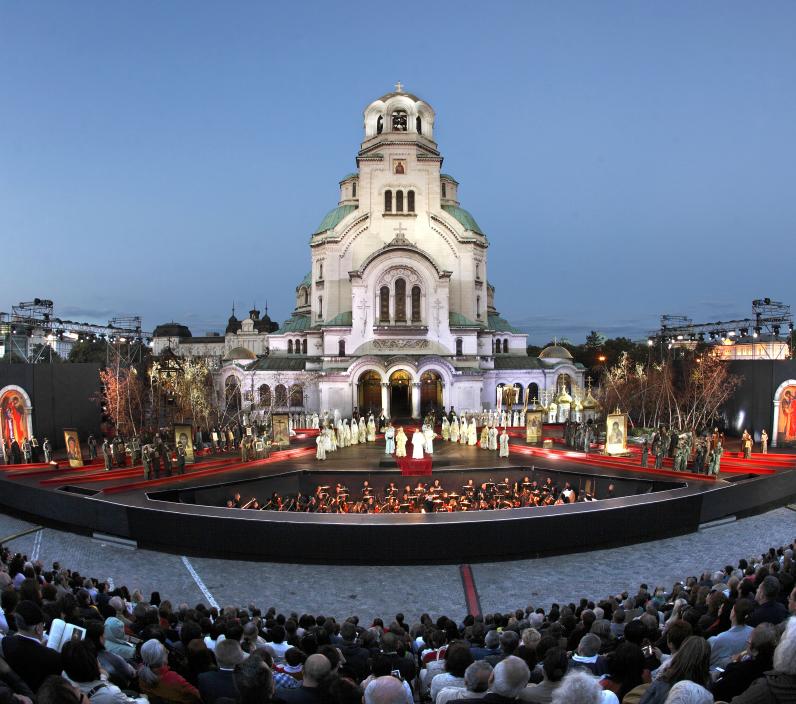 Mussorgsky
This performance is no longer viewable as video-on-demand for rights reasons but other material about the production is still available. 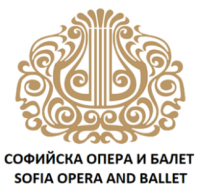 Tsar Boris is acclaimed as a saviour by the people of Russia. But, as his troubled reign unfolds, he is consumed by guilt over the means by which he attained the highest power. What legacy will he leave to his frightened children and people?

Conceived to celebrate the 90th anniversary of the magnificent St Alexander Nevsky Memorial Cathedral at the heart of the city in 2014, Sofia National Opera performed in the open air at the entrance to the building. The production also commemorated the 100th anniversary of Boris Christoff and 85th of Nicolai Ghiaurov, the two great Bulgarian basses who were the outstanding exponents of the title role during the second half of the 20th century. Today’s Bulgarian artists combined forces to present this spectacular and unique tribute.

Prologue: After being crowned Tsar of Russia, Boris Godunov (Martin Tsonev) offers a sincere prayer to the former tsars to ask for wisdom and good judgement as he begins his reign. Conducted by Konstantin Chudovsky and directed by Plamen Kartaloff.

My duckling, my lovely duckling!

Act I. The innkeeper (Tsveta Sarambelieva) sings a little song about the duck that she caught and what she plans to do with it. Conducted by Konstantin Chudovsky and directed by Plamen Kartaloff.

1598. Boris Godunov has retired to the Novodievichy Monastery near Moscow. The police force a crowd to beg Boris to become Tsar of Russia. The boyar Shchelkalov announces that Boris still refuses the throne and mourns Russia’s unsolvable misery. A procession of pilgrims prays to God for help. The police warn the crowd to be at the Kremlin the next morning ready to cheer.

The next day, the bells of Moscow herald Boris’s coronation. On a square in the Kremlin, the new tsar, overwhelmed by fear and melancholy, begs God to look kindly on him. He invites the people to a feast. The people rejoice.

1603. In the Chudov Monastery, the monk Pimen is writing the last chapter of his Russian history. The novice Grigory awakens from a nightmare and expresses his regret at not having tasted glory in war and society. He questions Pimen about the dead Tsarevich Dimitri, rightful heir to Boris’s throne. Pimen recounts the events leading Dimitri’s murder (the assassins implicated Boris before they died) and remarks that the tsarevich would have been Grigory’s age. Alone, Grigory condemns Boris and decides to flee the monastery.

Now on a mission to unmask Boris and impersonate Tsarevich Dimitri, Grigory is trying to enter Lithuania to find support for his cause. At an inn near the border, he falls in with two vagrant monks, Varlaam and Misail, and uses them as cover. No sooner has he asked the innkeeper, who warns that the frontier is heavily patrolled, for directions to the border than a police officer enters with a warrant for Grigory’s arrest. The officer is illiterate, so Grigory reads the warrant, substituting a description of Varlaam for his own. But Varlaam can read. Grigory escapes, pursued by the police.

In Boris’s apartments, his daughter mourns the death of her fiancé. Boris comforts her tenderly, talks intimately with his son about the succession to the throne and the responsibilities involved, then reflects to himself on the crime that brought him to the throne and the fears that torture him. Shuisky, a powerful boyar, brings news of a pretender to the Russian throne, supported by the Polish court and the Pope. When Boris learns that the pretender claims to be Dimitri, he is deeply shocked, and Shuisky reassures him once again that the real tsarevich was in fact killed. Shuisky leaves and Boris gives way to his terror, imagining that he sees Dimitri’s ghost. Torn by guilt and remorse, he prays for forgiveness.

Grigory, who now openly claims to be Dimitri, has made his way to Sandomir Castle in Poland, where he hopes to court and win the powerful Marina Mnishek. Marina intends to win Grigory in order to realize her ambition of ascending the Russian throne. But the Jesuit Rangoni has his own plan: Marina must seduce Grigory for the glory of the church, and convert Russia to Catholicism through their union. Grigory awaits Marina in the castle garden, receives assurances from Rangoni of Marina’s love, and finally courts Marina. She rejects his declarations of love until she is sure of his determination to become tsar.

In front of Cathedral of St. Basil in Moscow, starving peasants debate whether Tsarevich Dimitri is still alive when they receive the news that his troops are nearby. A group of children torment a Holy Fool and steal his last kopek. When Boris and his court come from the cathedral to distribute alms, the Holy Fool asks Boris to kill the children the way he killed Dimitri. Shuisky orders to seize the Holy Fool, but Boris asks his accuser to pray for him  instead. The Holy Fool refuses to intercede for a murderer. When Boris’s entourage passes by and the people disperse, the Holy Fool laments Russia’s dark future.

In the Duma, the council of boyars passes a death sentence on the accused. Shuisky arrives with a report on Boris’s hallucinations of the murdered tsarevich. Boris suddenly storms in, disoriented, and cries out to Dimitri. When he regains his composure Shuisky brings Pimen before the Duma. Pimen tells of a man who was cured of blindness while praying at Dimitri’s grave. Boris collapses. He sends the boyars away and calls for his son.  He appoints him heir to the throne, says a fond farewell to the boy and dies.

In a forest clearing near Kromy, an angry mob seizes and humiliates several boyars and police. Varlaam and Misail enter proclaiming Boris’s guilt. The mob reinforces its resolve to tear down the old order, and when two Jesuits appear, at the head of the Polish-Catholic advance, they are attacked and brutalized by the crowd. The fake Dimitri arrives with Marina, Rangoni, and his army. He calls for the cheering people to follow him on his march to Moscow. The Holy Fool remains behind, lamenting Russia’s bleak and uncertain fate.

The two most influential operas of the 19th century are Wagner’s Tristan und Isolde and Mussorgsky’s Boris Godunov.

Wagner’s ‘musical action’, where everything is concentrated on the inner drama of the soul, has been the dominant force in subsequent musical thought, with both good and bad effects. He derived his theatre from the ancient Greeks, reworking the dramatic ideals of 5th century BC by means of Northern myths.

Mussorgsky’s source is Russian history, seen through Pushkin’s historical drama, which in turn derives its form from the historical plays of Shakespeare. Their method is ‘epic theatre’, in which many short and often disconnected scenes build up a diverse picture of both the pattern and the contradictions of historical events. Despite Wagner’s overwhelming clout as an innovative musician, it may be argued that the ‘amateur’ Mussorgsky had an even more widespread influence on 20th-century opera. Debussy was an admirer: ‘Mussorgsky is great in his independence, sincerity and charm. He is some god of music…The Russians will give us new impulses for relief from the ridiculous stiffness. They will help us better to know ourselves’.

The true vocation of the artist

‘Life wherever it manifests itself; truth, however bitter; bold, sincere speech – these are my leaven’ wrote Mussorgsky in 1875. Three years earlier, he had rejected ‘presentation of only physical beauty, in its material sense’ as ‘crude childishness, art in its infancy. Drilling into the tiniest traits of human nature and human masses, conquering them, that is the true vocation of the artist’.

The later and fuller (1872) version of Boris Godunov, with its addition of the Polish scenes, and especially the substitution of the final revolutionary scene in Kromy Forest for the much terser St Basil scene, strives towards that diversity.

The earlier 7-scene format of 1868/69, adopted in Sofia Opera’s production, serves to concentrate the action, and encompasses material from ten of Pushkin’s 25 scenes. Many, though by no means all of the subsidiary characters are skilfully omitted or, in the case of the Pretender, foreshortened. The process damages the picture of Russian history, but strengthens the relationship between the two main characters, Tsar Boris and the Russian people.

The Tsar and his people

The people become the supporting pillars of the drama, with Boris’s personal predicament at its core. The chorus plays its role in the first two and last two of the seven scenes, but no part in the three central scenes. The bond between sovereign and subject is crucially treated in three scenes spread across the opera. In scene 2, the Coronation, Boris prays that he will be a good ruler and dedicates himself to the people. In scene 5, six years later, Boris surveys his troubled reign, its good intentions and its natural disasters, in the central soliloquy of the opera. Scene 6, set outside St Basil’s Cathedral, contains the devastating encounter between the haunted Tsar and the meanest of his subjects, the holy fool. Boris’s soul is now bare, as he asks the idiot to pray for him.

The idiot refuses to pray for ‘Tsar Herod’, the infanticide. He who has nothing dares to speak the truth, or is too innocent to lie about the event which haunts Boris and has cast a pall over his reign. As in Shakespeare, the natural disasters – the famines, the fires that destroy homes, the unexplained deaths in the family – are a metaphor for the stricken land, destroyed by its contaminated ruler.

Haunting images of a murdered child

The image of the murdered child Dmitri haunts the opera, as it haunts Boris. At the moment of his greatest glory, at his Coronation, Boris’s soul is heavy with foreboding: his soliloquy is in the starkest contrast to the rejoicing which precedes and follows it. In the Chudov monastery, Pimen’s meticulous chronicle dwells obsessively on the events of thirteen years before at Uglich, a story which fires the dreams of the young monk Grigory. In scene 5, in the Tsar’s apartments in the Kremlin, Shuisky too vividly retraces the terrible deed that cannot be undone, leading to Boris’s hallucination of the murdered child. The idiot, in scene 6, says it even more bluntly. In scene 7, it is Pimen’s narrative of the blind shepherd whose sight was restored by a vision of the Tsarevich Dmitri at Uglich, which provokes Boris’s final collapse. And at the very end of the opera, when Boris is at rest at last, we have the image of his own son Fyodor fearfully awaiting his own fate. This image reflects Pushkin’s short but incomparably bleak final scene of the abandoned Godunov children.

This open-air production in front of Sofia’s St Alexander Nevsky Cathedral made its own history by celebrating its consecration and great Bulgarian artists.