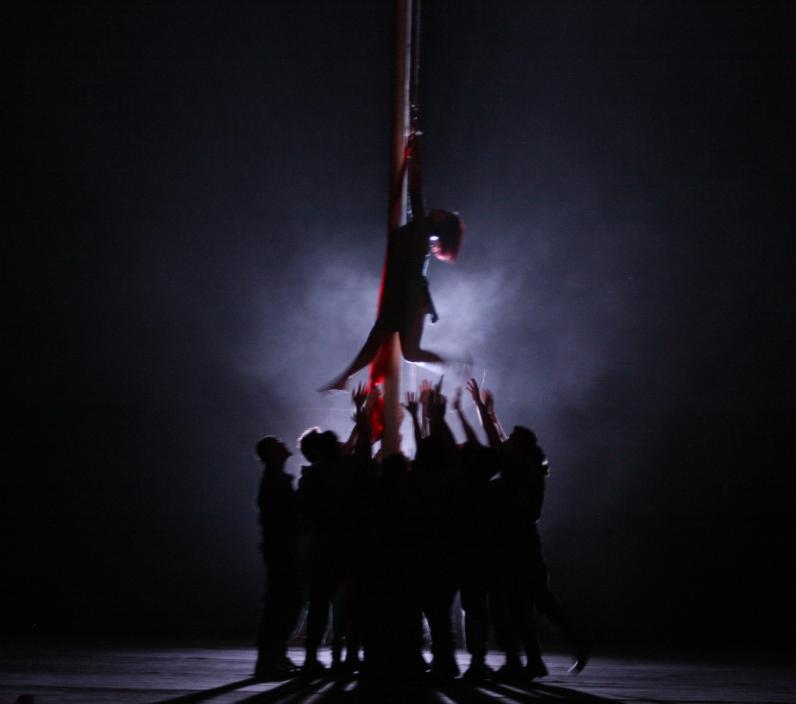 Bizet
This performance is no longer viewable as video-on-demand for rights reasons but other material about the production is still available.

Carmen is wilful and rebellious, independent and free... but for her, the cards have foretold death...

Love is a rebellious bird... Carmen sings about love and how it cannot be tamed, playing with the hearts of the soldiers on the square.

‘Sur la place, chacun passe’, sing soldiers on a square in Seville. Here, the young Micaëla is looking for José, who arrives after she leaves. Soon, the girls who work in the cigarette factory nearby leave their work and sing to the young men (“La cloche a sonné).

Soon, Carmen enters. ‘L’amour est un oiseau rebelle’, she tells us. Love is a rebellious bird. The men flock after her, but she will not choose a favourite. Instead, she tosses a rose to Don José, a soldier who has, until now, ignored her.

Micaëla gives José a letter from his mother, who wants him to marry her. Micaëla desires this, yet is very shy about it. As José is about to agree, all the women come streaming out of the factory – it turns out that Carmen attacked another woman with a knife. The officer of the guard, Zuniga, orders José to secure Carmen’s hands, but she sings a seductive Seguidilla and convinces José to free her. She escapes as she is being led away, and José is arrested for freeing her.

At Lillas Pastia’s inn, Carmen, Frasquita and Mercédès entertain Zuniga and the officers. Carmen learns that José has been released from prison.

‘Vivat, vivat le Toréro’, sing the crowds outside: it is the great toreador Escamillo, who is invited inside and regales the company with the Toreador song, subsequently wooing Carmen. She spurns him.

Carmen and her friends are joined by smugglers Dancaïre and Remendado, and they endeavour to help them get rid of their contraband. But Carmen doesn’t want anything to do with this new scheme, instead preferring to wait for José. Finally he arrives, after the others all leave, and she dances for him. José tells her of the flower that she threw at him (‘la fleur que tu m’avais jetée’) but is reluctant to run away with her. Zuniga shows up and tries to take away Carmen. After José fights him, he is forced to desert the army.

Micaëla is in disguise and searching for José (‘Je dis que rien ne m’épouvante’). Suddenly an intruder appears: it is Escamillo the bullfighter. Again he declares his love for Carmen, and José is outraged. Micaëla is found out and tells José that his mother is dying. He finally agrees to leave with her, and Carmen mocks him.

The bullfight rages in Seville. Here in the crowd José confronts Carmen (‘C’est toi! C’est moi!’) and he pleads for her to be with him, but she won’t have him. Upon her final rejection, he stabs her to death in parallel to Escamillo vanquishing the bull.

“The strong-willed and ruthless protagonist of Prosper Mérimée’s eponymous novel (1845) upon which the opera is based, when viewed through a Nietzchean lens, doesn’t remain confined to the femme fatale stereotype, but instead becomes the incarnation of a joyous and voluptuous vitality, proudly praising freedom and values that defy conventions and morals.”

- Danilo Tarantino, Introduzione all’opera (for the programme of Carmen at the Teatro Massimo Palermo)

Tarantino likewise hypothesizes that Friedrich Nietsche’s deep admiration of Carmen has a basis in the possibility that Bizet’s opera, baed on Prosper Mérimée’s novel of the same name (1845), mirrored his own philosophical ideas.

And indeed, like Tarantino explains, we see that the character of Carmen is the quintessential femme fatale. She seduces. She plays with the emotions of men and seems completely blind to the emotional realities of those around her, be they men or women. Some might call this narcissism, but for the purposes of an opera, it is a fascinating case study in human seduction. The femme fatale character is used to getting what she wants. The femme fatale can seduce any man. And at the end of a work, the femme fatale is often punished. In this case, Carmen is killed off from the opera for her crimes of seduction.

Scandal often followed performances of works that featured femme fatale characters. Carmen was no exception: audiences roundly rejected the work as immoral and could not come to terms with the realism of its portrayals of very imperfect people. It paved the way for much verismo opera that followed, and as Tchaikovsky correctly predicted, Carmen went on to be one of the most popular operas in the world, only Bizet did not live to see its success.