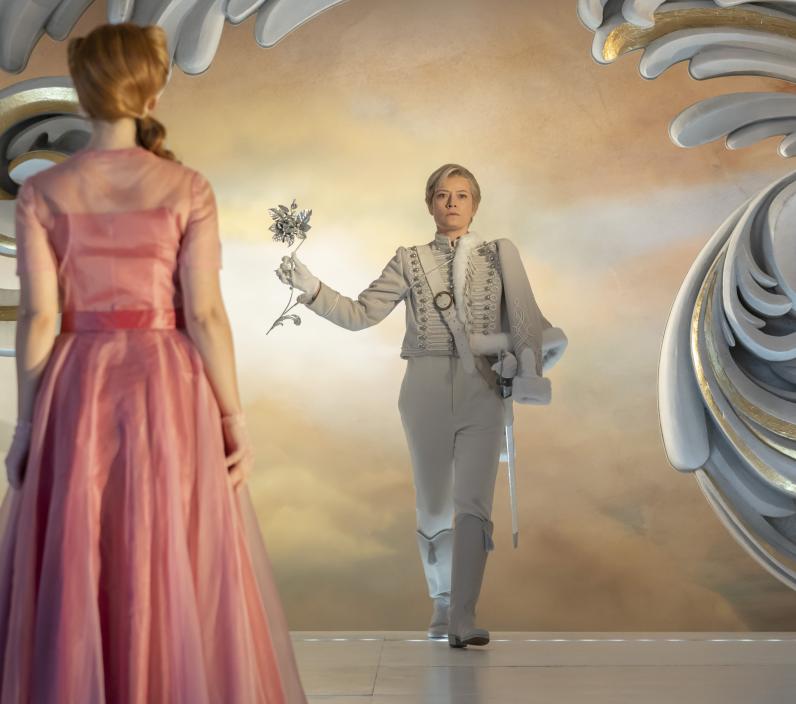 Strauss
This performance is no longer viewable as video-on-demand for rights reasons but other material about the production is still available.

The Marschallin is relishing time with her young lover, when her cousin’s sudden arrival ignites a comic chain of events. With honour at risk, social status bartered and happiness illusive, the Marschallin accepts time cannot be stopped and she must set young love free.

Exquisite music, poignant comedy and fairy tale romance: Der Rosenkavalier has it all. For its Garsington premiere, Bruno Ravella transposes what is perhaps  Richard Strauss’s most famous opera to the glamorous 1950s. Jordan de Souza conducts the excellent Philharmonia Orchestra and a bravura cast. ‘Garsington is back with a show that’s a joy to the ears, and a feast for the eyes.’ Mail on Sunday

The Presentation of the Rose

In one of Strauss’s most iconic theatrical moments, here in Garsington Opera’s 2021 production of Der Rosenkavalier, Madison Leonard and Hanna Hipp sing ‘The Presentation of the Rose’ with Philharmonia Orchestra. From Act II,  Octavian and Sophie declare their love for each other.

Before their final performance of Der Rosenkavalier at Garsington Opera, Derrick Ballard (Baron Ochs) and Madison Leonard (Sophie) share what it was like to perform Strauss's opera directed by Bruno Ravella under the baton of Jordan de Souza.

Exquisite music, poignant comedy and fairy tale romance: Der Rosenkavalier has it all. For its Garsington premiere, Bruno Ravella transposes what is perhaps Richard Strauss’s most famous opera to the glamorous 1950s. Jordan de Souza conducts the excellent Philharmonia Orchestra and a bravura cast.

The Marschallin has spent the night with her young lover, Octavian, whom she calls by his pet-name, Quinquin. Hearing voices, they fear that her husband, the Feldmarschall, has returned unexpectedly. Octavian disguises himself as a maidservant but the intruder is the Marschallin’s cousin, Baron Ochs of Lerchenau. The Baron brings news of his forthcoming marriage to Sophie, the daughter of Herr von Faninal, a recently ennobled merchant. He is much taken with Octavian who, unable to escape, is introduced by the Marschallin as Mariandel, her new chambermaid.

Ochs has come to request his cousin’s help in finding someone suitable to make the traditional presentation of a silver rose to his fiancée. The Marschallin objects to the attentions he is paying to her chambermaid but Ochs is unabashed: such actions are a nobleman’s prerogative. He speculates that Mariandel is so pretty she must have blue blood in her veins and boasts of having his own illegitimate offspring in his service, his manservant Leopold. The Marschallin suggests Count Octavian Rofrano as a possible rose-bearer and produces a portrait of him. Ochs is intrigued by the resemblance to Mariandel.

The Marschallin holds her morning levée. The Baron consults her lawyer but loses his temper when told that, as bridegroom, he cannot stipulate the terms of the marriage settlement. He is approached by the mysterious Italians, Valzacchi and Annina, who offer to watch over his fiancée to ensure her fidelity.

When everyone has gone, the Marschallin remembers herself as a young girl, forced into a loveless marriage. When Octavian returns she warns him that one day he will leave her for someone younger. He rejects the very idea. They discuss meeting later and part coolly. The Marschallin realises that she did not even kiss him goodbye and sends her servant after him with the silver rose.

Faninal’s household is in a state of high excitement at the imminent arrival of the rose- bearer. Octavian enters with the silver rose and presents it to Sophie. Following the formalities, they talk, but are interrupted by the arrival of the groom, Baron Ochs. Sophie is appalled by his condescension towards her family and by his boorish behaviour. Speculating on the delights of the wedding night ahead, Ochs congratulates himself on the ‘luck of the Lerchenaus’ and goes off to discuss the marriage contract with Faninal.

Sophie admits to Octavian that she would do anything to avoid the marriage. He promises to help her. They are overheard by Valzacchi and Annina who summon Ochs. He at first laughs off the incident but becomes increasingly furious when Octavian insists that the wedding must be called off. In the ensuing struggle, Ochs is wounded. Faninal orders Octavian to leave but as he goes he enlists the Italians to work for him instead of Ochs. Recovering his temper upon realising that his wound is not life-threatening, Ochs is further cheered by the arrival of Annina with a message from ‘Mariandel’, suggesting a rendezvous at an inn.

A private room at an inn

Valzacchi and his accomplices arrange various surprises for Baron Ochs, under the instruction of Octavian, who is again disguised as Mariandel. Ochs arrives but his attempts at seduction are thwarted by strange interruptions. He rings the bell in terror, only to be confronted by Annina, claiming to be his deserted wife and producing children whom she insists are his. A police commissar arrives and demands that the Baron explain what he is doing with a young girl in his room. When Ochs attempts to extricate himself by explaining that the girl is his fiancée, Faninal appears and is scandalised by the suggestion that Mariandel is his daughter. He sends for Sophie, who is waiting outside, before collapsing from shock. The chaos mounts until the Marschallin enters, summoned by Leopold on his master’s behalf.

Appraising the situation, she quickly takes control. Recognising the commissar as her husband’s former army orderly, she convinces him that this has all been a joke. Ochs persists in trying to insist on his marriage to Sophie but the Marschallin reveals Octavian/Mariandel’s true identity and he is persuaded to leave, pursued by the landlord, waiters and musicians, demanding payment. Sensing Octavian’s dilemma, the Marschallin tells him to go to Sophie. Seeing them together, so clearly in love, she reflects that what she prophesied has come to pass, sooner than she had foreseen.

5 Things to Know About Der Rosenkavalier

Even though Hofmannsthal had written the play upon which Strauss based Elektra, Der Rosenkavalier was the first work they created jointly from the start. When Hofmansthal settled on the plot, he skipped the prose text stage and set to work on the libretto right away. Strauss began composing what he called a Komödie für Musik (‘comedy for music’) before the libretto was even complete.

Hofmannsthal borrowed characters and elements of the plot from French composer Claude Terrasse’s operetta L’Ingénu libertin (1907) and French dramatist Molière’s Monsieur de Pourceaugnac (1669). The personalities of the Marschallin, vom Ochs or Octavian were inspired by a range of models, but there is no doubt that Der Rosenkavalier is a genuine Strauss/Hofmannsthal creation.

Strauss was no stranger to Mozart's work. He conducted Le Nozze di Figaro no less than 30 times before composing Der Rosenkavalier. The influence is audible. After Elektra and Salome, Strauss was anxious to compose a light-hearted work for once. He agreed on a theme with Hofmannsthal, which they initially named 'Ochs von Lerchenau'.

It is set in Vienna in the 1740s under Maria Theresa and was inspired by Wolfgang Amadeus Mozart. Strauss and Hofmannsthal even referred to it as ‘our Figaro’ to acknowledge the similarities between the two works. The parallels between the characters are particularly striking. Who is the Marschallin if not the Countess in disguise? Do you recognise Cherubino in Octavian?

3° Caught with her breeches down

Speaking of Octavian: what an incredible stage presence! He is on stage for almost the entire duration of the opera, singing its first and last words. As the object of desire for all three other main roles, Octavian is the main partner for all of them. And as if that were not demanding enough, he also has to put up with a double masquerade: He is played by a woman and pretends to be one in the plot. Including a breeches role is, of course, another allusion to Mozart's The Marriage of Figaro.

Since he is the Marschallin's lover and Sophie's suitor, all the love music in the opera is sung by women. Their glorious final trio is one of the highlights of the opera and its most famous passage.

Despite the historicising character and traditional look of Der Rosenkavalier, the opera is bursting with fantasy. You might not guess it from the title, but the central rose ritual never really existed. The idea of presenting a silver rose at a betrothal ceremony is pure invention and allows to emphasise the class distinction inherent in the opera.

The music that seemed so backward to Strauss' avant-garde colleagues (Otto Klemperer even called it 'sugar water') was not as authentically 18th century. Waltz music was not yet known and would only be invented in bourgeois Vienna in the 19th century.

5° The rose in Garsington’s garden

Bruno Ravella sets Garsington Opera's lavish new production in Gary McCann’s extravagant rococo settings, moving the action to the Dior-infused 1950s. Sensual flourishes on the walls and ceiling, sumptuous costumes and sensational performances on stage and in the pit: this Rosenkavalier is 'a feast for the eyes and the ears' (Culture Whisperer). Jordan de Souza conducts the Philharmonia Orchestra and an accomplished cast surrounding Miah Persson as Marschallin. 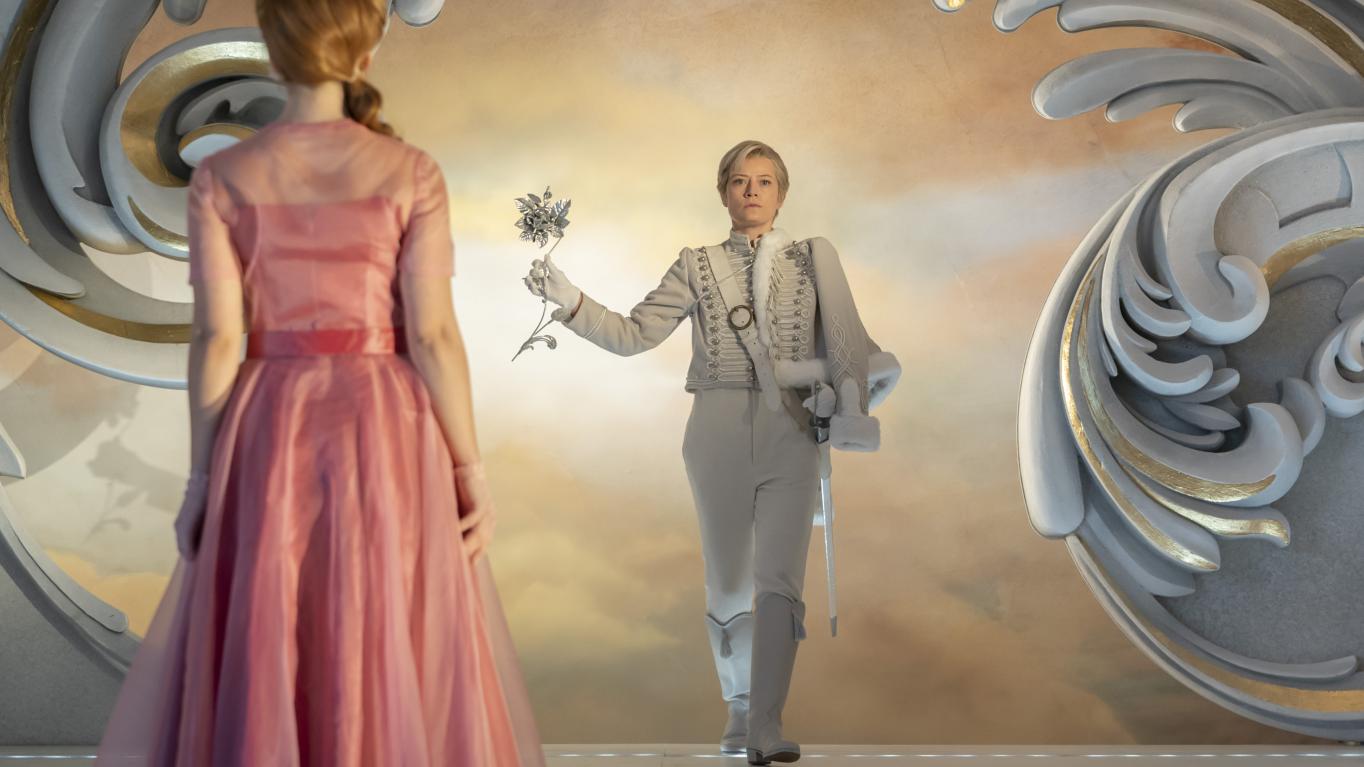