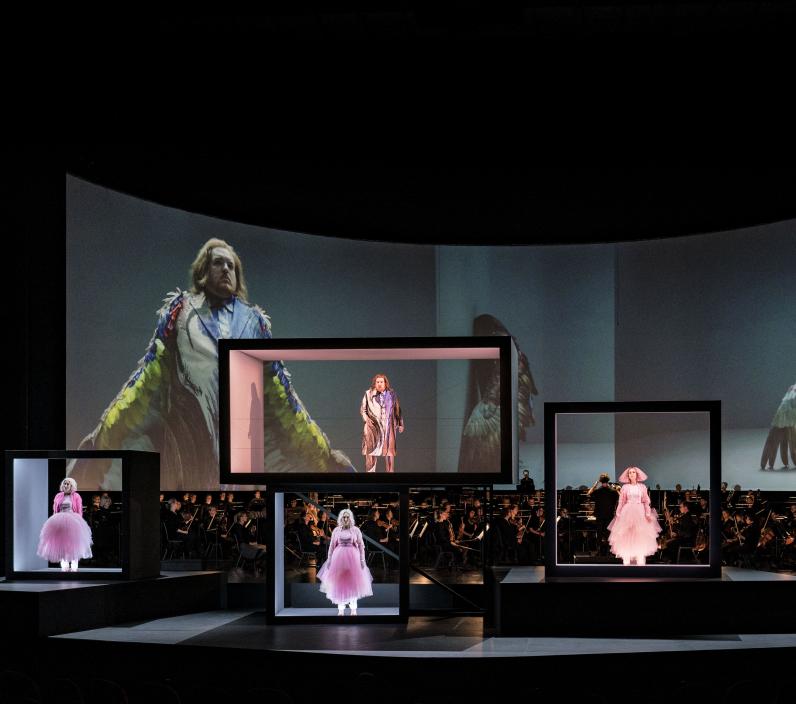 Zemlinsky
This performance is no longer viewable as video-on-demand for rights reasons but other material about the production is still available.

The Spanish crown princess receives a very special present: a little person. To everyone’s amusement, he is unaware of his small stature. Before long feelings develop between the pair, but what chance do they have in a world where appearance is everything?

Based on a story by Oscar Wilde, Der Zwerg (The Dwarf) is perhaps Zemlinsky’s best-known and most powerful opera. The performance marks both the first production of rising star Lorenzo Viotti as principal conductor at Dutch National Opera and the operatic debut of film and theatre director Nanouk Leopold. The heldentenor Clay Hilley performs the title role, while Infanta Clara is interpreted by soprano Lenneke Ruiten.

Copyright
Bart Grietens
Behind the scenes

Follow stage director Nanouk Leopold on her tour of the set at the production of Der Zwerg at Dutch National Opera. Just don't be surprised if you come across pigs digging in the mud.

In Dutch National Opera's production of Der Zwerg by Alexander Zemlinsky, the arrival of a strange bird casts pearls before swine. Take a peek at the gorgeous, beastly costumes and listen to director Nanouk Leopold and conductor Lorenzo Viotti share their thoughts.

At her birthday party, the Spanish crown princess, the Infanta, receives a very special present: a little person who is supposed to cheer her up. 'Der Zwerg' soon falls madly in love with the Infanta and sings her a love song. To everyone's surprise, the little man has no idea of his true appearance, and while he fancies himself a brave knight, he manages to move everyone with his singing. The princess plays a game of attraction and repulsion. It is clear that a relationship could develop between the two, but in a world of outward appearances, the reality of the mirror image can sometimes be tragically confrontational.

5 Things to know about Der Zwerg

Der Zwerg is Zemlinsky's sixth opera and was first performed in 1922 at the Cologne Opera at the request and under the direction of the famous conductor Otto Klemperer. Although the performance was very well received by the public, and other opera houses soon included the work in their repertoire, Zemlinsky did not achieve his hoped-for breakthrough as an opera composer with this work.

1° When art draws from life

The Austrian composer Alexander Zemlinsky was one of the central figures in the musical life of the early twentieth century, despite the fact that he always stood in the shadow of other great composers. He was Arnold Schoenberg's teacher and lifelong friend, while Alban Berg also belonged to his circle of friends. A passionate relationship with Alma Schindler, who later married Gustav Mahler among others, was one of the reasons for Zemlinsky's interest in the story of Der Zwerg. Zemlinsky wrote some nine operas and numerous other compositions, including the Lyric Symphony and Die Seejungfrau. Despite his conversion to Protestantism in 1906, his Jewish descent forced him to flee Austria to America in 1938. There, his career was cut short and his fragile health put an end to his composition work. He died of pneumonia in 1942.

Georg C. Klaren, librettist
The dwarf must represent something spiritual: of every man towards every woman; his ugliness must be taken very generally as an image for every feeling of inferiority…

The libretto of Der Zwerg is based on a literary fairy tale by Oscar Wilde, The Birthday of the Infanta from 1891. Zemlinsky had already shown an interest in Wilde's work: Eine Florentinische Tragödie (1917) was also based on a fragment of the Irish author's drama. The choice of Der Zwerg came from the young lyricist Georg Klaren (1900-1962), who proposed the theme, among others, to Zemlinsky. Georg C. Klaren was captivated quite early by the then modern views on the human psyche and sexuality. Based on this fascination and knowledge, he made a free adaptation of Wilde's fairy tale. Klaren later made a career as a film scriptwriter and director and realised, among other things, the first film adaptation of Büchner's Woyzeck/Wozzeck.

For Der Zwerg, the initial misrecognition and later recognition of the main character in his own reflection is the great tragic moment. The mirror as a central element in self-recognition and the formation of human identity was elaborated in psychoanalysis mainly by Jacques Lacan (1901-1981). He points to the fact that in the mirror image we identify with an image that is given to us from outside, by the mirror. In this way, we are always to some extent alienated from our self-image. We are, as the poet Rimbaud once put it, always another: ‘Je est un autre’.

Scientist and philosopher Ernst Mach, contemporary of Zemlinsky
One knows oneself as a person very poorly - As a young man, I once saw in the street a face in profile that was most unpleasant and distasteful to me. I was not a little shocked when I realised that it was my own face, which I had observed in a mirror image formed by two mirrors facing each other.

‘Through love I want to find myself in some way, instead of continuing to search and to strive, I want to receive from the hand of a like-minded person nothing less and nothing but myself, I want from him - myself!’

This is how one of Austria's most peculiar philosophers, Otto Weininger, characterised the human search for love in his successful but particularly controversial book Geschlecht und Charakter (Sex and Character). The librettist Georg Klaren was fascinated by Weininger and incorporated some of his ideas into his own work, including Der Zwerg. Zemlinsky too, in all likelihood, read Weininger's book and was fascinated by the psychological ideas that Klaren derived from the latter for the libretto.

5° A view through the lens: from film to opera

Dutch film and theatre director Nanouk Leopold (Rotterdam, 1968) makes her opera debut with Der Zwerg. Her first film Îles Flottantes (2000) competed for the Tiger Award of the Rotterdam Film Festival, her second film Guernsey (2005) won two Golden Calfs and was selected for the Cannes Film Festival. Her three following films Wolfsbergen (2007), Brownian Movement (2010) and Boven is het stil (2013) were selected for the Berlin film festival and won several awards at international film festivals. In 2017, she also made her debut as a stage director at Internationaal Theater Amsterdam. In contrast to the penetrating realism of her films, in her direction of Der Zwerg she goes to the power of abstraction and the tension relationship between the live actors and film projections on the stage.