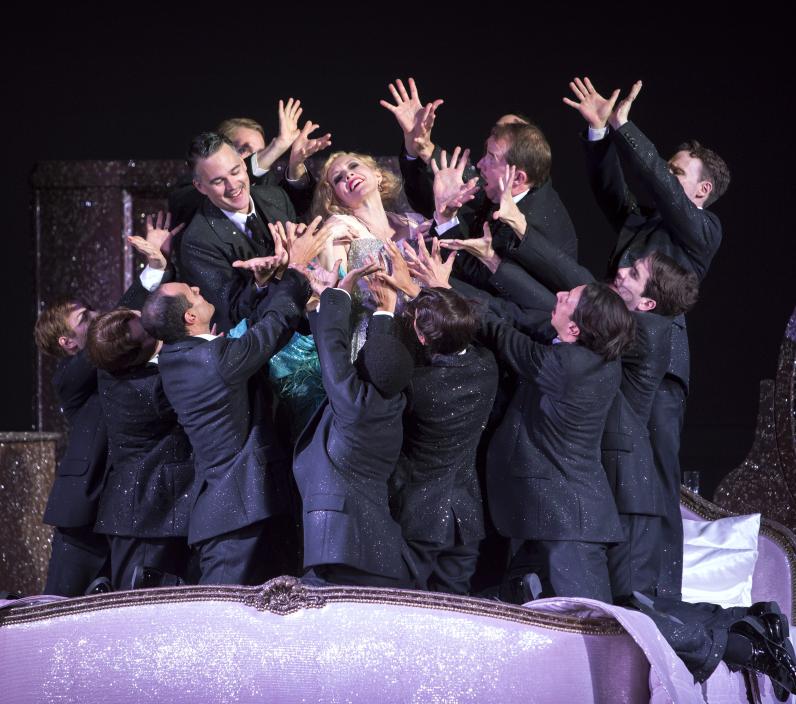 Korngold
This performance is no longer viewable as video-on-demand for rights reasons but other material about the production is still available.

Following the death of his young wife, a widower has isolated himself from the outside world. He lives solely for her memory, until one day he encounters a dancer who looks remarkably familiar.

Working together with the General Music Director Ainārs Rubiķis, Canadian star director Robert Carsen stages his production at the Komische Oper Berlin with Korngold’s musical psycho-thriller, one of the greatest hits of the 1920s.

Marietta (Sara Jakubiak) visits Paul’s (Aleš Briscein) house and is surprised to see a portrait of a woman who looks just like her.

Act II. Marietta (Sara Jakubiak) leads her troupe in a toast before asking Fritz (Günter Papendell) to sing a song. He chooses Pierrot’s Tanzlied, which tells the tale of a clown dancing in the moonlight with his beloved – a simple happiness now lost to him forever.

Behind the scenes of Die tote Stadt

In this behind the scenes video, director Robert Carsen discusses the appeal of the opera's story and the special relation between the libretto and music; dramaturg Maximilian Hagemeyer reveals aspects of history and of Korngold’s life that led to his success, neglect and rediscovery; and music director Ainārs Rubiķis highlights the visual quality of the composer’s music and his gift for instrumentation.

Following the death of his wife Marie, Paul has withdrawn to a room in his home which he calls the ‘Temple of Memory’. There he keeps mementos of his late wife, including a lock of her beautiful long blonde hair. Paul’s friend Frank learns of Marie’s death from the housekeeper Brigitta. When Paul appears, he excitedly describes his encounter with a strange woman who reminds him of his dead wife. When she visits him, Paul discovers that her name is Marietta and that she is a dancer. The lines between reality and imagination blur for Paul. After Marietta leaves, Marie appears to Paul and reminds him of their past love, imploring him to remain faithful to her memory.

Pauls’ obsession with Marietta deepens. Trying to find her, he meets Brigitta, who tells him that she cannot accept his affair with Marietta, and is leaving his employment because of his affair with Marietta. Paul then meets Frank who tells them their friendship is over because he has become Marietta’s lover. Paul spies on Marietta as she celebrates with her dancer friends and lovers. She decides to reenact with them the dance of Helene in Giacomo Meyerbeer’s opera Robert le Diable. Paul is outraged and interrupts the dance, forbidding her to play the role of a resurrected woman, Marietta sends away her partners. In the dispute which follows, Paul tells Marietta that he was only using her to be united with his dead wife. Marietta succeeds in seducing Paul once again, insisting that this time they will make love in Paul’s home and in Marie’s bed.

In Paul’s house, Marietta feels she has triumphed over her dead rival. Paul watches in ecstasy as a religious procession passes by his house. Marietta taunts him about his piety and further provokes him by playing with the relics of Marie, including her long hair. When Paul fails to recover the precious hair from Marietta, he throws her to the ground and strangles her with it. Brigitta, seeming to still work for Paul, announces the arrival of Marietta, who has returned to collect the bouquet of roses she forgot. Frank also returns, and encourages Paul to join him in leaving the city of the dead.

Erich Wolfgang Korngold already had a ballet and two one-act operas under his belt when at just 20 years old he composed his first full-length work, Die tote Stadt (‘The Dead City’). It is a late-romantic masterpiece that delves deep into the impenetrable confusion of the subconscious mind, and it took the operatic world by storm. Alongside Richard Strauss, Korngold was at one point the most frequently-performed composer on German stages, until the National Socialists brought his operatic career to a premature close. In 1934 he moved to the United States to write music for films, where his scores for The Informer, Anthony Adverse and The Adventures of Robin Hood each won him an Academy Award. ‘Music is music,’ he said, ‘whether it is for the stage, rostrum or cinema.’ His late-romantic compositions were no longer popular when he died in 1957 but in recent decades his works have finally been experiencing the revival they deserve.

2° Death and the City

Die tote Stadt is based on the Symbolist cult novel Bruges-la-Morte (‘Dead Bruges’) by the Belgian author Georges Rodenbach. Published in 1892, it is notable for being the first work of fiction illustrated with photographs. The novel tells the story of Hugues Viane, a grief-stricken widower who takes refuge in the silent, melancholic, lost-in-time city of Bruges. His morbid eroticism is wholly in keeping with the fin de siècle spirit as the fate of the medieval city becomes a metaphor for his own: ‘In this way the town, once beautiful and beloved too, embodied the loss he felt. Bruges was his dead wife. And his dead wife was Bruges. The two were united in a like destiny. It was Bruges-la-Morte, the dead town entombed in its stone quays, with the arteries of its canals cold once the great pulse of the sea had ceased beating in them.’

Charles Baudelaire’s Les Fleurs du mal, published a quarter of a century before Rodenbach’s Bruges-la-Morte, is regarded as the first work of Symbolist literature. Adopted by such writers as Stéphane Mallarmé, Paul Verlaine and Maurice Maeterlinck, the style slowly grew into a movement, and in 1886 the French newspaper Le Figaro published ‘The Symbolist Manifesto’. Written by the poet and essayist Jean Moréas, it describes Symbolist poetry as the ‘enemy of education, declamation, wrong feelings and objective description,’ stating that it instead ‘tries to dress the Idea in a sensitive form that, [...] while serving to express the Idea itself, would remain subjective. The Idea, in its turn, should not be deprived of the sumptuous lounge robes of extraneous analogies; because the essential character of symbolic art consists in never approaching the concentrated kernel of the Idea in itself.’

Several French composers were influenced by Symbolist writers. Gabriel Fauré’s song cycle Cinq mélodies ‘de Venise’ is based on poems by Verlaine, and he wrote incidental music for Pelléas et Mélisande, a Symbolist play by Maeterlinck. Claude Debussy used poems from Les Fleurs du mal for his song cycle Cinq poèmes de Charles Baudelaire; he looked to Mallarmé’s 'L'après-midi d'un faune' as the basis for his famous Prélude; and his own adaptation of Pelléas is now recognised as the archetypal Symbolist opera. As the movement spread across Europe, other composers and librettists experimented with the aesthetic. Today, operas considered to be Symbolist in style include Béla Bartók’s Bluebeard’s Castle, Richard Strauss’ Salome and Elektra, Sergei Prokofiev’s The Fiery Angel and Korngold’s Die tote Stadt.