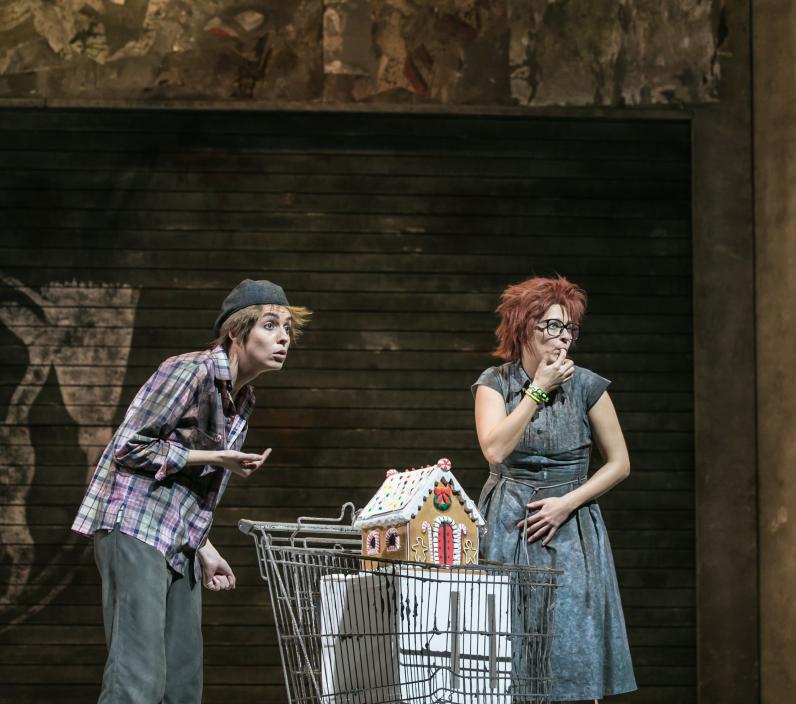 Humperdinck
This performance is no longer viewable as video-on-demand for rights reasons but other material about the production is still available.

Act 1 takes place in the broom-maker Peter’s house. His son Hänsel complains that he is hungry. Hänsel’s sister Gretel shows him some milk which a neighbour has given for the family’s supper. The children play and dance together. Their mother Gertrude returns and chides them for not working. She accidentally spills the milk, and chases them out into the forest to pick strawberries.  Their father Peter has been drinking, but has brought home some food. When he asks where the children are, his wife says that she sent them out into the woods. He warns her of the Witch who lives there and of the danger to their children. The parents leave their house to look for them.

Act 3 is the Gingerbread House, which the children discover when awakened by the Dew Fairy. They are so delighted that its roof and windows are edible, that they do not notice the Witch, who captures Hänsel in order to fatten him up to be cooked. Gretel, however, outwits her, and it is the Witch who topples into the flames instead. The oven explodes; whereupon, captive gingerbread children are restored to life. Just as they are freed, Hänsel and Gretel's parents also arrive. Together, everyone rejoices in the defeat of the wicked one, vanquished by the clever and courageous little girl.

The Wagnerian Engelbert Humperdinck is one of the most important figures in German fairy-tale opera. Humperdinck was not only a great admirer of Wagner’s music; he assisted in the production of Parsifal and tutored Wagner’s own son, Siegfried, in music.

The spirit of Wagner’s music is in Humperdinck’s work, and his only opera Hänsel und Gretel illustrates this. The opera began life as four songs for a pupper show Humperdinck’s nieces were putting together. The piece was immediately declared a masterpiece by Humperdinck's contemporary Richard Strauss, who conducted the fairy-tale opera at its Weimar premiere. This production of Hänsel und Gretel is directed Rafael R. Villalobos (Spain), winner of the European Opera-directing Prize in Graz.