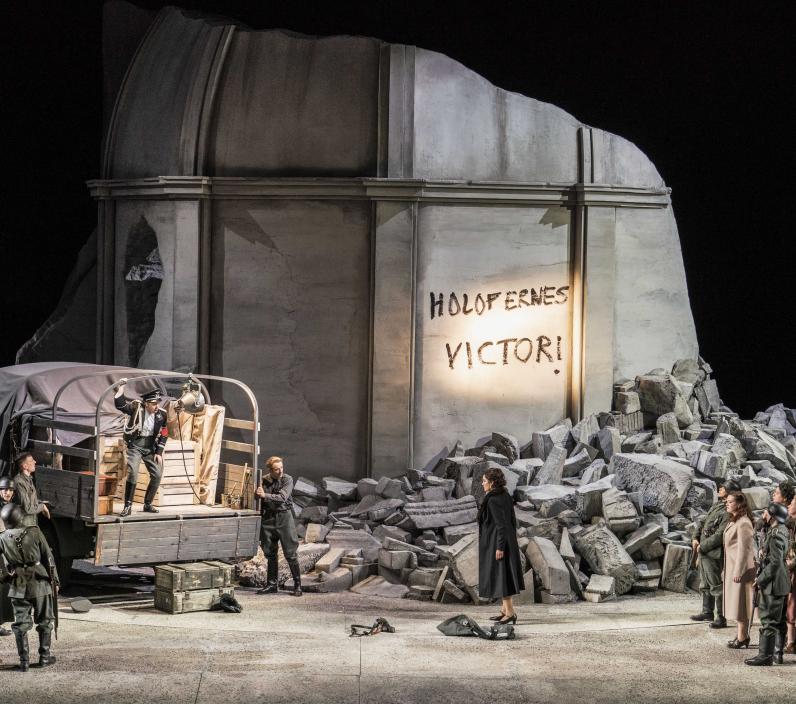 Vivaldi
This performance is no longer viewable as video-on-demand for rights reasons but other material about the production is still available.

With her village under siege, a daring widow implores the invading general for mercy. Catching the military man with his trousers down, she uses all her cunning and charisma to try and save her people.

Courage triumphs in this allegorical oratorio. Though not intended for the theatre, the twists and turns of the plot lend itself perfectly for staged production. Distinguished Baroque and Vivaldi specialist Andrea Marcon conducts his own early music ensemble, La Cetra Barockorchester Basel.

Juditha (Gaëlle Arquez) has been invited to dine with the general Holofernes. In this aria, she reassures her handmaid, Abra (Polly Leech) that everything will be fine so long as she trusts her and stays by her side.

Vagaus (Vasilisa Berzhanskaya), squire to Holofernes, announces that the general will soon arrive. He promises that though he is feared throughout the land, he is also charming and will treat Juditha well.

'This oratorio is one of the highlights of the baroque,' claims director Floris Visser. 'Of music history, even.' Hear how he turned Juditha Triumphans into a staged production at Dutch National Opera in this interview between him and dramaturg Luc Joosten.

Holofernes, the general of the Assyrian King Nebuchadnezzar, prepares the army for the storming of the city of Bethulia. Holofernes is sure of victory and inspires courage in his soldiers. Vagaus, the general’s squire, announces the arrival of a beautiful woman from Bethulia. She wants to speak to Holofernes personally, and he agrees to the stranger’s request. The woman, Judith, begs him to spare the city and its inhabitants. Holofernes is enchanted by her looks and her voice and invites Judith for a private dinner. After some reluctance at first, Judith follows him to his residence.

At the dinner, Holofernes toasts Judith's beauty while she tries to keep him at bay. He promises to keep the peace in exchange for her love. As he gets more and more under the influence of the wine, the general becomes overwhelmed by sleep. Judith grabs her chance and decapitates Holofernes with his own sword. She and Abra, her handmaiden, place the head in a bag and flee from the Assyrian camp. Upon their return to Bethulia, the citizens and the high priest Ozias hail Judith as a heroine.

5 things to know about Juditha Triumphans

The story of Juditha Triumphans comes from the apocryphal Book of Judith, which chronicles the Assyrian siege of the Jewish city of Bethulia. The beautiful young widow Judith goes to the Assyrian army commander Holofernes to beg for mercy and sways him with her charms. But while he lies asleep after too much food and wine, Judith cuts off his head and returns to Bethulia triumphant. The story of her bravery inspired dramatic paintings by the likes of Giorgione, Caravaggio, Gentileschi and Allori.

Vivaldi originally composed Juditha Triumphans for the girls of the Ospedale della Pietà, an orphanage in Venice internationally renowned for its outstanding music school. He therefore wrote it for an all-female cast, giving the roles of the Assyrian general and the high priest of Bethulia to contralto soloists. The oratorio features large choral passages and a richly instrumented orchestra, as befitting the occasion of its composition – to celebrate the Venetian victory over the Turks in the 1716 Siege of Corfu. This victory was short lived, however, as two years later Venice lost their seventh – and final – war with the Ottoman Empire, triggering the long decline of the once great maritime republic. Juditha Triumphans’s libretto is in Latin and was written by Iacopo Cassetti.

‘This oratorio is one of the highlights of the baroque age or even all of musical history,’ says director Floris Visser. ‘Bach has his St Matthew Passion; Handel, his Messiah; and Vivaldi has his Juditha Triumphans.’ The Dutchman wanted to incorporate Caravaggio’s portrayal of Judith beheading Holofernes but didn’t know how to make that happen. Then it occurred to him: What if Holofernes is a German Wehrmacht general who doesn’t just massacre peoples, but also steals art?

French mezzo-soprano Gaëlle Arquez debuts at Dutch National Opera in the role of Juditha. ‘I like to be outside my comfort zone,’ she says, which has led her to singing a varied repertoire of titles including Xerxes, Carmen, Pelléas et Mélisande and Norma. At the Victoires de la Musique 2011 Arquez was extolled as a ‘Révélation Lyrique’ and in 2017 she released her debut solo album, Ardente Flamme, on the Deutsche Grammophon label. ‘It is like fireworks,’ she says of Vivaldi’s music. ‘There are beautiful vocal decorations and then very quiet lamentations, which are so deep that time itself seems to stop.’

La Cetra Barockorchester was founded in 1999 by Peter Reidemeister, then director of the Schola Cantorum Basiliensis. The orchestra specialises in early music and regularly accompanies operas at the Basel Theatre. Andrea Marcon has been chief conductor since 2009, and under his direction the orchestra has become one of the leading ensembles in historically informed performance practice. The name La Certa refers to an ancient lute-like instrument, and was the title of a set of twelve violin concertos by Antonio Vivaldi first published in Amsterdam in 1727 and dedicated Charles VI, Holy Roman Emperor.