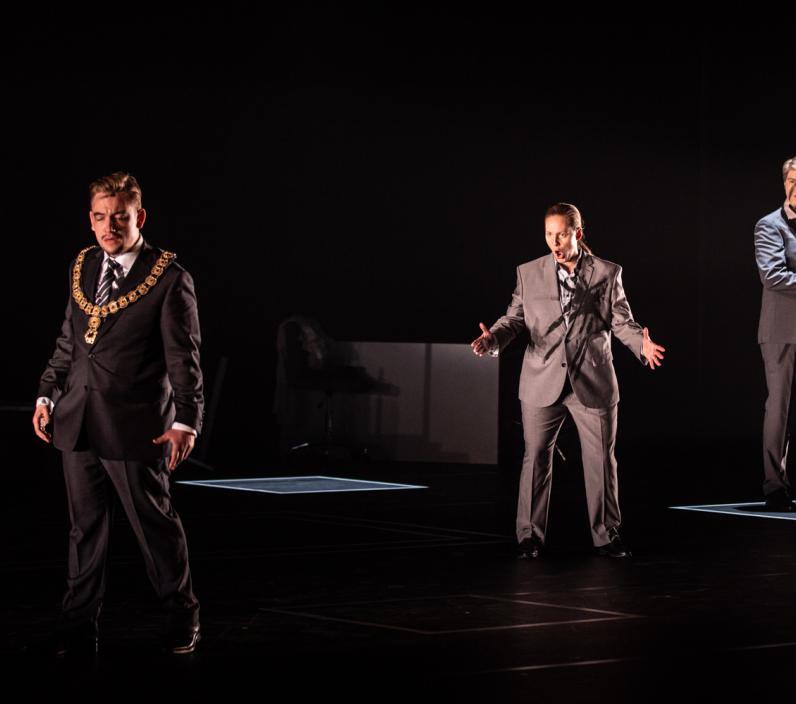 When his friend, blinded by love, is driven to an act of terrorism, the emperor has to learn the personal cost of political power.

Dealing with the appalling jealousies, ambitions and love affairs during the reign of the emperor, La clemenza di Tito has eerie parallels with our own era in Bergen National Opera's new production. With its excellent young all-Norwegian cast, Mozart's last opera asks the deeply relevant question: who is the leader we want in times of crisis?

As Bergen National Opera set about re-staging their La clemenza di Tito in February this year – the original production was planned for over a year ago - Covid19 closed Norway´s borders. Gone went their international cast. They had to start again – with only four days to recast with only Norwegian singers. But BNO is not a company that gives up easily.

The director, Rodula Gaitanou, had been a miracle of practical sense from the start. She agreed to direct remotely too, as did the designers for both stage and lighting. They were to become a web-cam presence in the rehearsal room and onstage. The chorus, too, had to be broadcast into the hall from a basement studio so as to keep them distanced from both orchestra and soloists.

La clemenza di Tito, a story of Rome, politics and intrigue, a tale that examines the whole psychology of leadership now has a whole new musical exploration for these fractured times. Rome wasn´t built in a day. But opera, sometimes, has to be…

Sesto (Adrian Angelico) has led a failed uprising against his friend, the emperor Tito (Bror Magnus Tødenes), but cannot reveal that Vitellia, whom he loves, is behind the plot. Tito reluctantly sentences Sesto to death. Before he is taken away, Sesto sings this aria for Tito, reminding him of their former love for each other and expressing his remorse and despair.

Vitellia's lust for power has led her to attempt to kill the emperor, and it is her suitor Sesto who is about to pay the price. So what should she do? Save her friend's life and give up the throne? The Norwegian soprano Beate Mordal sings 'Non più di fiori', a sublime aria that reveals the hitherto unsuspected sensitivity of an ambitious and jealous woman plagued by guilt.

General and Artistic Director at Bergen National Opera Mary Miller meets conductor Edward Gardner. Together they discuss their favourite Mozart opera, La clemenza di Tito, talking about the psychological complexity of the piece and about all of the pastel shades of Mozart's output in a search for just what it is that tugs at their heartstrings.

Vitellia, daughter of the previous Roman emperor, wants to regain her place on the throne by marrying Tito, the present emperor. But her hopes are broken when she finds out that Tito has chosen the Judean princess Berenice as his bride. Vitellia persuades Tito’s closest friend Sesto, who is in love with her, to assassinate the emperor. When she hears that Tito has renounced Berenice for reasons of state, her hopes are revived and she calls off the assassination plot.

Tito now intends to marry Sesto’s sister Servilia, and sends Sesto’s friend Annio to inform her. Annio and Servilia, unbeknownst to Tito, are in love, so they are crushed by this news. Servilia is prepared to obey her emperor, but she decides to tell him the truth. Tito thanks her for her honesty and says he will not marry her against her wishes.

When Vitellia learns of Tito’s plan to marry Servilia, she once again urges Sesto to assassinate the emperor. Just after Sesto leaves to carry out her wish, Annio and the guard Publio arrive to escort Vitellia to Tito, who has now chosen her as his wife. Vitellia desperately tries to stop Sesto but realizes it is too late.

Although still hesitant, Sesto and his accomplices set fire to the Capitol, intending to trap Tito inside. When Sesto is about to confess his crime, Vitellia begs him not to divulge anything. All of Rome laments the tragic events.

Annio tells Sesto that the emperor is still alive. When Sesto confesses his murder attempt but refuses to give any reason, Annio counsels him to admit everything to Tito and rely upon his mercy. Vitellia urges Sesto to flee, but she is too late: a fellow conspirator has betrayed him, and Publio enters to arrest him. Sesto asks Vitellia to remember his love.

The Roman people are thankful that the emperor has survived. Tito struggles to comprehend the conspirators’ motives and doubts that Sesto would betray him, but is told that Sesto has admitted his guilt before the Senate. Annio implores Tito to treat Sesto with compassion. The emperor refuses to sign the death decree until Sesto has had a chance to explain himself.  Sesto assures him that he did not want the throne for himself, but he hesitates to implicate Vitellia. Tito reluctantly condemns Sesto to death. Left alone, the emperor is torn between his duty and his feelings, concluding that he can reign only if his power is rooted in love. Annio and Servilia beg Vitellia to help save Sesto. Vitellia realises that she must confess her crime as Sesto’s life is too high a price to pay for her place on the throne.

Tito is about to pronounce Sesto’s sentence when Vitellia appears and confesses her guilt. Tito tells Vitellia that he had intended to pardon Sesto anyway/ Mastering his emotions, Tito extends the pardon to all the conspirators, to high praise from the Roman people.

Shortly before his death, Mozart interrupted his work on The Magic Flute and the Requiem to compose La clemenza di Tito. Penniless, he accepted a commission to write his first opera seria in 10 years for the coronation of Leopold II as king of Bohemia in Prague in 1791. Salieri had already turned down the offer. No opera by Mozart was more clearly put at the service of an external political cause than La clemenza di Tito, namely to promote the reactionary political and social policies of the aristocratic elite. While there is no evidence to judge the famously progressive thinking composer's stance on this, it can be argued that by portraying the Roman Emperor as a humanist, he encouraged Leopold II to follow this virtuous lead.

Indeed, La clemenza di Tito is a political allegory that presents mercy as a pivotal principle of enlightened rule. The storyline's events - the fanatical young Sesto under the influence of his beloved Vitellia sets Rome on fire and threatens to kill the emperor Tito - allow sinister tendencies in human nature to imperil the values of the Enlightenment, but ultimately demonstrate that revolting against a righteous and benevolent ruler is futile. The restoration of these values hinges on recognition scenes in which the three protagonists overcome their baser instincts: Vitellia her jealousy and ambition, Sesto his abandonment of reason in favour of passion, and Tito his angry departure from his merciful politics. At the end of the opera, Tito pardons the conspirators and reaffirms his policy of clemency.

Just as Mozart liberally tailored the somewhat stale libretto handed down from composer to composer to suit his own needs, director Rodula Gaitanou had to rework the opera to accommodate the necessary safety protocols for staging it. The result is an abstract rendition of the piece’s essence, zooming in on the protagonists' relationships. Her psychologically mature staging is all the more remarkable when we consider that Gaitanou - along with her creative team - directed the production entirely from afar, joining the rehearsals via webcam.

This reduction of the set to the bare minimum, depriving it of a specific world, facilitates the concentration on what is truly on the director's mind. For Rodula Gaitanou the parallels between La clemenza di Tito’s historic setting and our times are clear; an elaborate set would only blur them. In her hands, the drama focuses on isolation and broken relationships of a public and private nature. It is obvious: the people on stage are like us. We too are on the brink of a personal and epochal apocalyptic moment. Gaitanou asks us: Who is the leader we want to have in times of crisis? Does power bring people together or isolate them? Can we forgive without forgetting? These questions have only become more pressing with the loss and change incited by the pandemic. But Gaitanou sees a light at the end of the tunnel, which is epitomised by the spirit of community that this production displays: ‘All of us together, we break and we build again, we persevere and survive, we love in isolation and we come together in creation.’