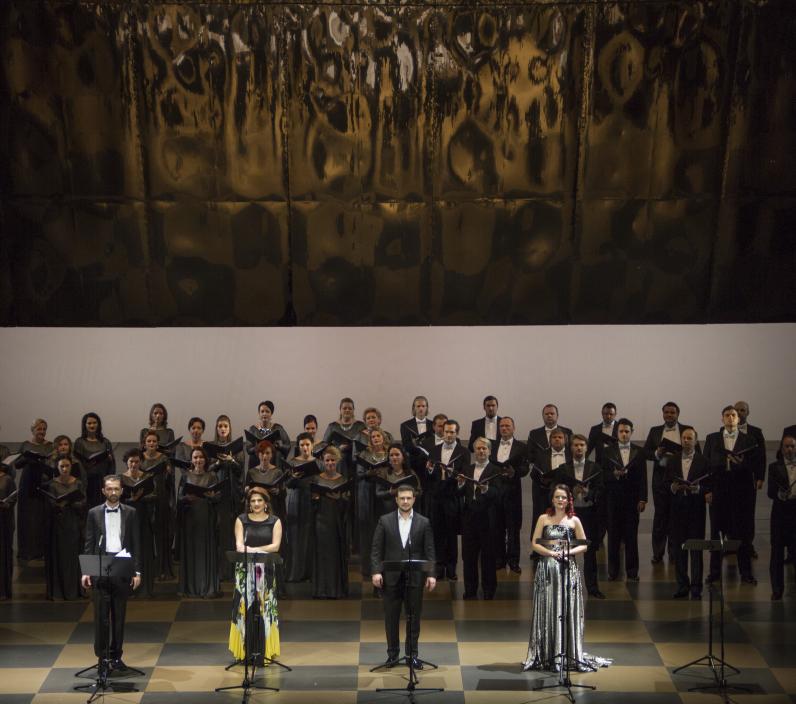 Daring to give love one last chance, a glamorous courtesan leaves her wealthy protector for a beguiling young man. But as she chases after a new life, her past is never far behind.

Puccini decided to write his only full-length comic opera in the style of Der Rosenkavalier, ‘only more entertaining and more organic’. This concert performance sees conductor Jānis Liepiņš and Azerbaujani soprano Dinara Alieva pair up once again after their stunning performance of ‘Sola, perduta abbandonata’ at the Latvian National Opera's Anniversary Gala.

The fashionable poet Prunier (Pavel Petrov) sings his latest song. It tells the tale of Doretta, who, in her dream, rejects the king’s affections as she knows that his gold cannot make her happy. Prunier has not yet finished writing the song so the glamorous courtesan Magda (Dinara Alieva), who empathises with Doretta’s situation, has a go at improvising an ending.

Swept up in a whirlwind relationship, Ruggero (John Irvin) has secured his mother’s blessing to marry Magda (Dinara Alieva). But she cannot accept his proposal and reveals to her lover everything about her past as a glamorous Parisian courtesan. Magda then parts with Ruggero for good, leaving to return to her wealthy protector.

In this interview she discusses her joy of playing Magda in this concert performance of Puccini's La rondine at the Latvian National Opera, a role she has previously played on stage at the Deutsche Oper Berlin.

In an elegant salon in her house in Montmartre, the courtesan Magda entertains her guests, including the fashionable poet Prunier. Lisette, the host’s maid, annoys Prunier with her over-friendliness; they are having a secret affair and he has promised to make her into a famous actress. Magda, who is the lover of the wealthy banker Rambaldo Fernandez, reminisces about a time in her youth when she was madly in love with a student. She sings a song composed by Prunier and improvises the ending, much to everyone’s delight, including Rambaldo’s. Magda is interested by something that Prunier said – that real love, faithfulness to one person, is in vogue again. The others receive this with sarcastic remarks. Prunier offers to read the ladies’ fortunes. It’s simple – everything is written on each of their palms.

Lisette tells Rambaldo that there is a young man that has been waiting for him for a few hours. It is Ruggero, the son of one of Rambaldo’s childhood friends, who has arrived from the provinces. Magda is pleasantly surprised by the youth’s manners and shyness. Prunier notices this and, continuing his palm-reading, foresees that Magda, like a swallow, will fly towards her dreams for a while, but eventually, not having reached her goal, she will return to her old life.

Rambaldo asks the guests to give Ruggero suggestions for where to spend an evening out in Paris. Lisette suggests a fashionable nightspot called Bullier. She is also planning to go there tonight with Prunier. Ruggero, slightly bewildered by the raucous bunch, says his goodbyes and leaves. Beguiled by Ruggero, Magda decides to disguise herself and meet him tonight at Bullier.

The bar at Bullier is full with the buzz of revelry. Ruggero sits by himself and observes the goings-on. Courtesans vie for the attention of young men. Magda arrives and is immediately surrounded by students, but she convinces them that she already has a seat at Ruggero’s table. Ruggero, surprised and puzzled, invites her to join him. The young man is attracted by her shyness and grace. They go to dance. During their conversation Magda doesn’t reveal her true name, instead calling herself Paulette. Both are overcome with feelings of love, which even the unexpected arrival of Lisette and Prunier cannot quell. It is also not in Rambaldo’s powers to quell when, as the friends have pulled Ruggero aside, Magda explains to Rambaldo that she is refusing his guardianship because she wishes to follow her new, true love. Overjoyed, the lovers leave the bar.

Magda and Ruggero, overcome with bliss, are staying at a quiet resort on the French Riviera. They are happy. Ruggero has decided that Magda must become his bride. He has secretly written to his parents of his plan and has asked for their permission to marry. When she learns of this, Magda realises that she has gone too far, and that she cannot hide from her past any longer. Her conscience won’t allow her to set foot in Ruggero’s parent’s house. Magda decides to sacrifice her love and leave Ruggero. Prunier’s prophecy has come true. Lisette has had a disastrous debut on stage, and she wishes to work for Magda again as a maid.

Ruggero rushes in with a letter from his mother. Magda reads it and is deeply moved – Ruggero’s mother consents to the wedding. Yet Magda cannot accept the proposal. She reveals to Ruggero everything about her past and, parting with her one true love for good, she returns to Rambaldo.

From the mid-19th century up until the start of the First World War, two Viennese theatres vied to be recognised as the city’s premier venue for operetta: the Theater an der Wien, located in the Mariahilf district; and the Carltheater, which was in the suburbs in Leopoldstadt. During this golden age of Viennese operetta, each commissioned their fair share of works by Johann Strauss II, Carl Zeller, Oscar Straus and Franz Lehár, among other great composers of the artform. But it was the Carltheater that in autumn 1913 commissioned an operetta from none other than the composer of verismo tragedies, Giacomo Puccini.

The Italian composer agreed to the commission but was dissatisfied with the drama presented to him by the Austrian librettists Heinz Reichert and Alfred Willner. He negotiated with the theatre to do away with spoken dialogue altogether and for the text to be reworked by the Italian librettist Giuseppe Adami. While the characters, plotlines and dance-like melodies of an operetta were kept, these changes ultimately turned the planned work into a comic opera.

Puccini completed La rondine - Italian for ‘The swallow’ -  in 1916 but by that time the Kingdom of Italy had joined the Allied Powers against Austria-Hungary and it became impossible to present it in Vienna. Moreover, Puccini’s usual publisher, Ricordi, declined the score, describing the opera as ‘bad Lehár’. But all was not lost: the new work was taken up by Ricordi’s rival, Lorenzo Sonzogno, who arranged for the premiere to take place in March 1917 at the Grand Théâtre de Monte Carlo in the neutral territory of Monaco.

Despite being received warmly there and in theatres on its return to Italy, the opera soon faded from the repertoire. It has remained a rarity compared to Puccini’s other works. For Adami, however, it was a success, and he would later go on to write librettos for Puccini’s one-act opera Il tabarro and his final, unfinished full-length opera, Turandot.

After a string of highly successful productions of Puccini operas in their last two seasons - including Madama Butterfly, Turandot, Manon Lescaut and Le Villi - Latvian National Opera now presents this pearl from his mature ouvre in a concert performance. ‘It is a skilfully composed work that holds a fine balance between the emotional drama characteristic of the composer and a pure naivety,’ says music director and conductor Jānis Liepiņš. Though young in his career, his conducting experience ranges from Bizet to Wagner and from serious operas to the operettas that influenced the writing of La rondine. ‘Puccini has tried to imitate the style of an operetta,’ Liepiņš explains, ‘while at the same time trying not to stray too far from his melody-writing talents.’

The metaphorical swallow of the story is Magda, a glamorous Parisian courtesan, who leaves her wealthy protector for a beguiling young man. The character is played in this concert performance by Azerbaijani soprano Dinara Alieva, a soloist at the Bolshoi Theatre in Moscow. She has performed as a guest soloist in opera houses all over Europe and is a particular favourite with audiences at the Latvian National Opera, where in recent years she has played the leading lady in two operas by Verdi: Elvira in Ernani, and Leonora in Il trovatore. She returned to Riga in November 2018 when she performed in the company’s Anniversary Gala.

‘This was not a role debut for me,’ explains Dinara Alieva in this interview for OperaVision. She previously played Magda at the Deutsche Oper Berlin in 2015 in a staged production of La rondine that marked the directorial debut of the tenor Rolando Villazón. She wants to use that experience in this performance at the Latvian National Opera: ‘Even though this was a concert performance, I wanted to do everything possible to reveal Magda’s character to the audience.’