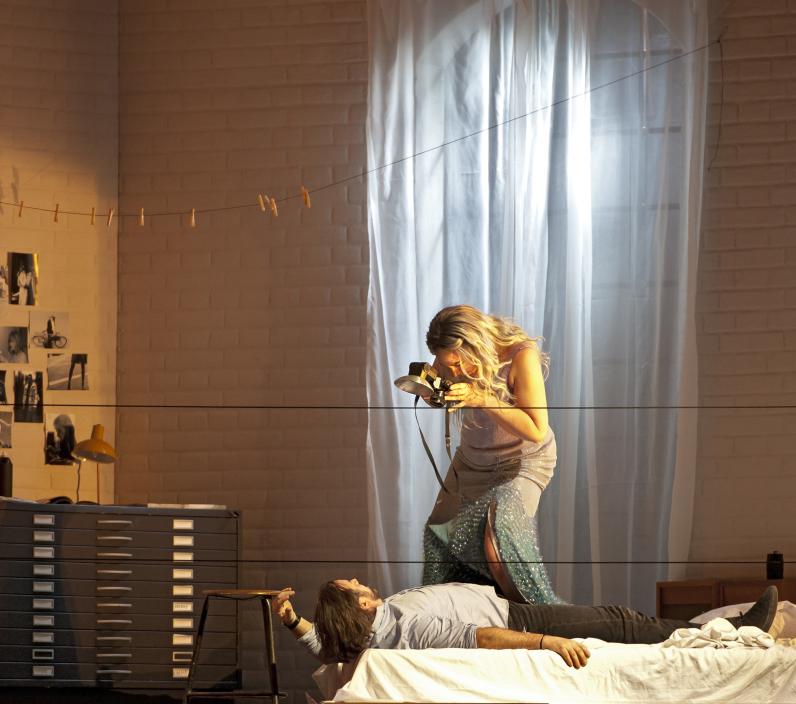 Offenbach
This performance is no longer viewable as video-on-demand for rights reasons but other material about the production is still available.

LES CONTES D'HOFFMANN, Opera in five acts by Jacques Offenbach.
Libretto by Jules Barbier
Based on the play by Jules Barbier and Michel Carré
Edited by Michael Kaye and Jean-Christophe Keck

'Belle nuit, ô nuit d'amour', known as a barcarolle is a duet for soprano and mezzo-soprano which opens the third act of Les Contes d’Hoffmann, Jacques Offenbach’s last opera. It is one of opera’s most famous medodies, sung by the Veneitian courtesan Giulietta (Christine Rice) and Hoffmann’s Muse, who has taken on the appearance of Hoffmann’s best friend, Nicklausse (Irene Roberts).

During the prologue of Les Contes d'Hoffmann by Jacques Offenbach, the poet Hoffmann, played by the lyric tenor John Osborn, entertains his students with the legend of Kleinzach the dwarf. Midway through, he goes off on the beauty of a woman he used to know.

'If you stop having this connection with the public, the opera is not going to exist anymore.' During Opera Europa's 2018 Autumn Conference, the OperaVision team sat with Ermonela Jaho to talk about her career and projects.

In the tavern of Master Luther, Nuremberg. The Poetry Muse would like to become the only source of inspiration for the poet Hoffmann. To do this, she takes on the appearance of Nicklausse, Hoffmann's best friend. Councilor Lindorf, Hoffmann's enemy, intercepts a letter from the singer Stella who gave the poet an appointment after his performance in the adjoining room. Arriving at the tavern at the interval, Hoffmann and Nicklausse meet students who ask the poet to tell them his three great love stories.

In the laboratory of the scientist Spalanzani. Hoffmann, a lover of Olympia, has become the scholar's pupil to be able to get nearer to the girl he thinks is his daughter. But it is actually an automaton manufactured by Spalanzani and his collaborator Coppélius. Although warned by Nicklausse, Hoffmann is blind to this fact. At a ball, while Olympia dances and sings beautifully, Coppelius ends up breaks the doll, revealing its true nature. Hoffmann painfully realises what is happening and is mocked by the crowd.

In the house of luthier Crespel, in Munich. This time, Hoffmann has fallen in love with the beautiful Antonia who has the sumptuous voice of her mother, a singer who died from too much singing. She eagerly repeats a song but her father warns of the dangers of these exercises on her fragile health, not wishing to see her die like her mother. Hoffmann finally learns that Antonia is suffering from tuberculosis and begs her to stop singing. However, Dr. Miracle, who convinced Crespel to let him heal his daughter, encourages her to sing which she does until her inevitable fate...

In a palace, in Venice. Even if Hoffmann has promises Niklausse that he will not fall in love with the courtesan Giulietta, it is no use! Giulietta, who remains under the authority of the demon Dapertutto, is preparing to take over Hoffmann's shadow, after stealing that of his ex-lover Schlemil. The latter also tries to save Hoffmann from his passion for the courtesan but is killed by Hoffmann in a duel. After a search, Hoffmann arrives in Giulietta's room, only to see her leave with a new lover.

Back in Luther's tavern. Hoffmann has finished his story, totally drunk. He understands that the one he really loves is Stella, but on seeing him is such a inebriated state, she goes back to Advisor Lindorf's arms. Despite the attempts of Nicklausse (appearing once more as the Muse of Poetry) to cheer him up, Hoffmann gets totally drunk to try to forget.

Offenbach never saw this piece staged during his lifetime. He died 5 October 1880 while the opera was in rehearsal at the Opéra Comique in Paris, before even being able to complete the score. The French composer, Ernest Guiraud, completed the orchestration for the first performance on 10 February 1881. Although unfinished, The Tales of Hoffmann is nevertheless musically Offenbach`s most accomplished work. With over one hundred pieces to his credit, this opera pushes comic opera towards the staging of more three-dementional characters. Today, The Tales of Hoffmann is one of the frequently performed French operas in the world.

2° A tribute to E.T.A Hoffmann

Offenbach was inspired for the character of Hoffmann by the German writer E.T.A Hoffmann who was well known for his tales, and who Offenbach greatly admired. Hoffmann himself was a passionate music lover, an admirer of Mozart to the point of changing one of his first names to Amadeus. Offenbach also drew inspiration from the characters created by the German writer: the story of Olympia is taken from The Sandman and Antonia's story from Krespel Councillor or the Cremona Violin and, finally the story of Giulietta from The Adventures of New Year’s Eve.

3° The order of the acts

The acts of Les contes d’Hoffmann usually run like this: Prologue, Act I (Olympia), Act II (Antonia), Act III (Giulietta) and Epilogue. However, at the first performance, Giulietta's act was not performed until after in Act II, following the logic that the most dramatic act should end the piece. This order remained common practice throughout the twentieth century. Yet, in reality, this order does not quite match Hoffmann’s evolution as a character and the original order was eventually restored.

4° The vocal requirement of the roles in the opera

Offenbach intended for the 4 women of Hoffmann's life (Stella, Olympia, Antonia, Giulietta) as well as the 4 incarnations of Evil (Mal-Lindorf, Coppelius, Dr. Miracle, and Dapertutto) to be performed by two singers. While it is the common practice with the villan of the story, the women are often performed by 4 different singers. That is because the part require different vocal types. Olympia is a coloratura soprano, Antonia a lyric soprano, and Giulietta a mezzo-soprano.

5° The production at Dutch National Opera

The exceptional tenor, John Osborn, plays the title role of Hoffmann. The four female roles are rich territory for the great singers of today, including soprano Ermonela Jaho. The staging is signed by the young German director Tobias Kratzer, who has recently been nominated in the category Best Director for the International Opera Awards, the Austrian Opernregiepreis, the German Faust Theatre Award and the German magazine, Opernwelt.