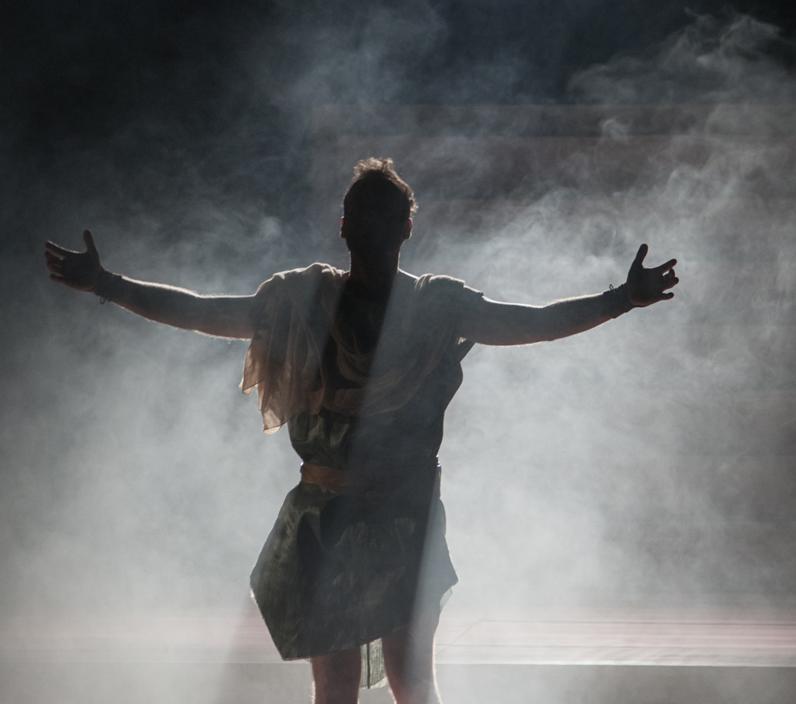 Monteverdi
This performance is no longer viewable as video-on-demand for rights reasons but other material about the production is still available.

The ancient hero fights to conquer death through music. 400 years and thousands of operas later, he has surely won his battle.

In a prologue the Music introduces us into the story, a demonstration of the power of music.

The second act continues the celebration, but this is interrupted by the appearance of the Messenger. She breaks the news of the death of Euridice - she was bitten by a snake while gathering flowers. The Messenger leaves and declares she will shun human company from now on, living lonely in a cavern to reflect her sorrow.

In the third act, Orfeo accompanied by Speranza (Hope), sets out for the Underworld. She leaves him as he approaches the Styx, eventually overpowering the boatman of the dead, Caronte, with his music, and crossing the river.

In the fourth act, in the kingdom of Pluto, Proserpina has been deeply affected by the music that Orfeo brought. She pleads with her husband for the release of Euridice. Orfeo’s young bride is released, on one condition: as she follows Orfeo, he must absolutely not turn to look at her.  As he walks away, doubts assail him and he looks round, only to lose Euridice, who must now remain in the Underworld.

The fifth act finds Orpheus alone in the fields of Thrace, comforted by Echo. Apollo appears as a deus ex machina, descending in a cloud to raise Orpheus to the sky, where he can spend eternity gazing on Euridice’s likeness in the stars.

New Belgrade Opera and Opera & Theatre Madlenianum (Serbia) presented their first Monteverdi opera L’Incoronazione di Poppea in 2014 to great acclaim. In 2017, on occasion of the anniversary of the composer’s birth year, the two companies embarked on a journey to put together the first ever performance of Monteverdi’s L’Orfeo in Serbia - a work generally acknowledged as the first opera. Written in 1607, Monteverdi’s use of vocal and orchestral colors, played on period instruments of the time, created a basis for the further development of opera as a genre.  The composer’s expert vocal writing inspired generations to come. The archaic sound of period instruments, with coaching and musical direction by historical performance experts Marijana Mijanović and Predrag Gosta, together with sublime stage direction by German director Daniel Pfluger, provide an opportunity to enjoy this music as the composer intended.

The Fable of Orfeo

Favola in musica, the term we most often see attached to L’Orfeo, means “story in music,” or “fable in music.” Favola was often used to denote narratives with mythological content, and L’Orfeo is perhaps the best known example of such usage.

The myth of Orpheus comes to us from Greek mythology. And it is indeed symbolic that the first opera should be written about a legendary musician from Thrace. This is a character that accompanies Jason and the Argonauts on their quest for the golden fleece. Orpheus is the classic bard, singing stories of creation, accompanying himself with an instrument, helping along the group, finding unusual solutions to problems. “Orpheus with his lute made trees,” wrote Shakespeare. And, indeed, the character of Orpheus builds up an entire musical legacy: the world of opera, whose roots push down and feed an entire form of art.

L’Orfeo then depends on storytelling: the music serving the words, not the other way around. Monteverdi creates a narrative out of the music, depicting our world as well as that of Hades with both sung and instrumental gestures. It is from this musical impulse that all of opera is born: the creation of musical narratives that intertwine with their texts.

L’Orfeo can in fact be considered a fable. It has legendary creatures that stand in place of human characters in order to illustrate human traits. And it contains a lesson, taught in a most tragic manner. Don’t look back upon your beloved if you have been warned that this will cause you to lose her. It is not only a warning to pay attention and take care of your loved ones, but also a strong commentary on self-centredness. For Orfeo’s transgression, Eurydice is punished. Fair? Not at all. But unfortunately, rather relatable.